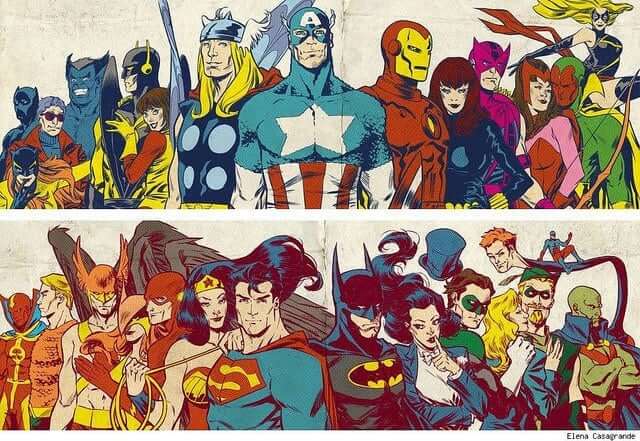 The silver age of comic books was the period in comic history spanning through 1956 to 1970. It marked a stylistic shift away from the lull that fell on the industry after the golden age and was the birthplace of many of the characters that are still hugely successful to this day. It saw the rise of some of the most famous writers and illustrators that the industry has ever known and introduced a more nuanced side to its heroes both new and old.

Superhero comic book sales had seen a steady decline post World War II and heading into the early 50s; the industry had shifted away from superhero stories and was instead focused on horror, crime, and romance. This all changed however when DC decided it was going to revive an old superhero in The Flash who was reinvented, renamed, red-costumed, and renewed. This all-new The Flash first appeared in DC’s Showcase #4, a series they used to test the popularity of new characters or revisit old ones. The new Flash was met with no small amount of interest and so they quickly green-lit a new run of everyone’s favorite speedster.

What DC did with The Flash is fundamentally representative of a lot of the values that define silver age comics. They made a move away from magic and gods and instead leaned more into scientific origins and borrowed from the in-depth and precise writings of science fiction novels. The Flash’s new costume was a lot sleeker and in keeping with what we now consider the “classic” superhero look. The most important shift, however, and the one that is possibly the defining feature of the silver age is that Barry Allen starts off as a flawed and relatable person. Before he acquired his powers when a lightning bolt caused a chemical spill, he was just a regular guy, always late for work, much to the chagrin of his girlfriend Iris West. Whilst DC moved away from this nuance and relatability as The Flash grew in popularity and became another of their golden boys, it’s this flawed hero trope that laid the foundations for the house that Marvel built.

Following on from the success of The Flash and renewed interest in superheroes DC introduced the Justice League of America which went on to become one of their bestselling titles. Stan Lee was quick to pick up on the trend and Marvel went onto pen what would turn out to be their own iconic superhero squad in The Fantastic Four #1. Whilst DC focused on big drama and action on a grand scale, Marvel went a slightly different route and one that would shape the identity of the silver age comics to come. The Fantastic Four were different from the superheroes that came before them, whilst their origin was pure science fiction and extraterrestrial, their characters were much more down to earth. Whilst Superman was off saving the entire galaxy, Marvel heroes were busy squabbling amongst themselves and worrying about paying rent. It was these humanizing traits and relatability that saw popularity soar in titles such as Spiderman and the X-men.

Another formative aspect and influence on the silver age comics was the founding of the Comic Codes Agency (CCA). During the period between the golden and silver age of comics, the popularity of horror and crime comics saw an increase, the rise in prominence of these comics were unfortunately linked to a similar spike in “juvenile delinquency”. In 1954 the publishers introduced the CCA in order to regulate comic content and squash the negative press. The new stipulations and guidelines meant far stricter screening for the horror and crime comics, yet the resurging superhero genre and the moral and just path their titular characters usually embark upon were much easier to get published. Whilst some comics took this too far and became stale or unbelievably clean other titles still managed to walk the line between the light and dark to tell captivating stories.

Of course, it’s not just Marvel and DC who were affected by the new codes, other publishers had to move in the new directions too. Harvey Comics, for example, discontinued their horror line completely and instead focused on the new target audience of young girls introducing characters such as Caspar The Friendly Ghost and Richie Rich. Superhero saturation didn’t tighten its stranglehold on the market until around 1966, following the massive commercial success of the Batman TV show.

As well as the introduction of comic book staples such as Spiderman, The X-men, and Justice League, the silver age also saw the rise to fame of venerated heroes of the genre such as Steve Ditko, Jack Kirby, Curt Swan, Jim Steranko, and Carmine Infantino. It saw the establishment of Marvel as a force to be reckoned with and it was the period in which comic books became a respected art form alongside the Pop Art movement. It marked a shift towards more in-depth and relatable storytelling that further evolved in the Bronze Age Of Comics, and was the origin of the move towards comics aimed at adults, not just at younger audiences.

The end of the silver age comic era is not as universally defined as its beginning. Some believe that it ended when Julius Schwartz the man who handed over his revitalized Green Lantern to a new writer and artist team due to sagging sales in 1970. Others argue that it didn’t really die until the same night Gwen Stacy did in the shocking, bone-snapping finale of “The Night Gwen Stacy Died” issue of Spiderman in 1973. The Bronze Age of comics did tackle much darker and socially relevant themes and so whether, with the world-weary resignation of Hal Jordon or the heartbroken resilience of Peter Parker, the transition was a fairly apt one.

Silver age comics have become fairly collectible and rare first editions of standout character origins have sold at auction for significant amounts of money, most famously Amazing Fantasy #15, the introduction of Spiderman, which ended up selling for $1.1million.