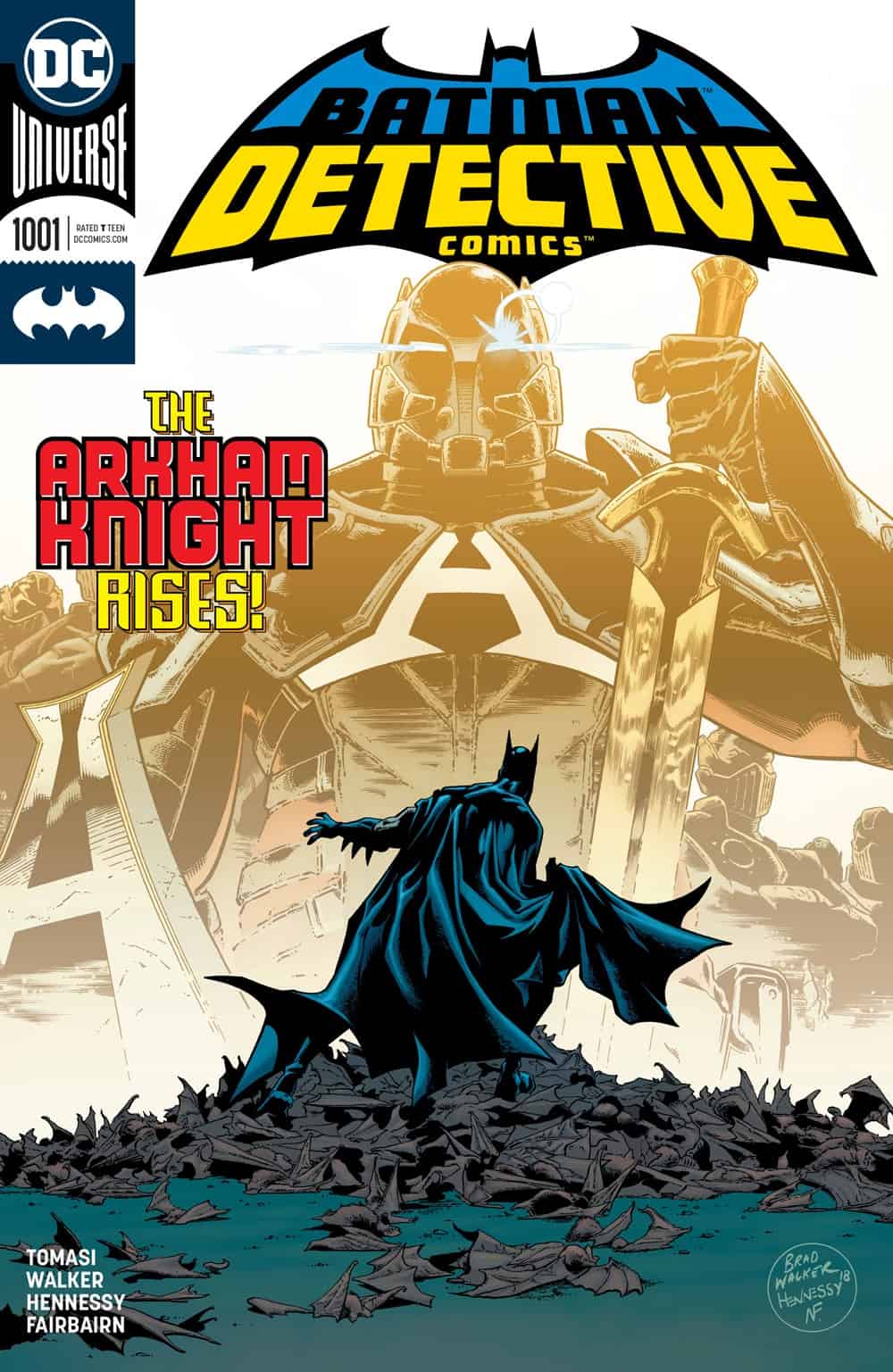 Last week I wrote a retro review for “Whatever Happened to The Caped Crusader”. In the event that you missed it you can check it out here. This week I will be taking an in-depth look at Detective Comics issue 1001 before the next issue hits this Wednesday. Peter J Tomasi writes this latest Detective Comics story. With artwork done by Brad Walker, Nathan Fairbairn, and Andrew Hennesy. This issue hit comic shops and digital comic stores on April 10, 2019. If you that haven’t read the issue yet, please be advised that spoilers are below:

Detective Comics issue 1001 starts off following the story “Medieval” that started in Detective Comics issue 1000. The Arkham Knight is finally ready to carry out his plan for Gotham City. The issue opens with the Arkham Knight who has gathered his “disciples”, the Knights of The Sun. These acolytes are ready to “burn back the darkness” that rifles the city. Next we turn to Commissioner Gordon who is investigating the mass deaths of bats being found all around Gotham. As if it were fated, it also happens that the World’s Greatest Detective is looking into this strange occurrence as well.

After preforming several autopsies on the dead bats, Batman can only think of one person who can help him solve this mystery; Francine Langstrom. Being the wife of the Man-Bat Kirk Langstrom, Francene is of course investigating the mass genocide of bats in Gotham. Having a heightened sonar senses (a result of the Man-Bat serum), Francene keeps hearing the screaming of all the bats that are dying. The sound is driving her mad, calling her to once again use her husband’s serum that previously coursed through her.

Not too long after Batman arrives, unable to take the screaming anymore Francine injects the serum becoming She-Bat. She takes off to track the source of the screaming, with Batman in close pursuit behind her. The source of the cries leads them to the Gotham City Zoo, where more bats are dying. Once Francine has been subdued, one of the Arkham Knight’s “sun bomb” devices goes off. After the “explosion” Batman is ambushed by the Knights of The Sun. During this battle the Arkham Knight makes his “first appearance” over a battered and beaten Batman.

Who Is The Arkham Knight:

For those of you that are unfamiliar with the character, the Arkham Knight started off as a character that was created by Geoff Johns and Paul Dini for the video game Batman: Arkham Knight. The game was the last chapter of the very popular Rocksteady Batman: Arkham series.

In regular DC continiuty Jason Todd was killed by the Joker and comes back to life as Red Hood. Currently, Red Hood is featured in the monthly series “Red Hood : Outlaw”. This story arc leaves the identity of this Arkham Knight a mystery. I won’t take a gamble at who this Arkham Knight is just yet. Although it will be very interesting to see where the creative team takes this. I personally believe It would have to be someone who Batman knows and who is familiar with him. The Knights of the Sun have not only had proper training, but also have the weapons and armor to counter act all of Batman’s technology.

Detective Comics Issue 1001 overall has a very solid story to it. Its a prefect start for those of you that are just looking to jump on after Detective Comics issue 1000. As well as it’s great starting point book for new and returning readers.  The story sets up the upcoming Arkham Knight arc very well. By the time I finished reading it, I found myself wanting more as well as wanting to know more about this version of the Arkham Knight. In my Opnion, I feel confident that the character is in good hands with Tomasi at the helm. I love the quick wit banter that takes place between Bruce and Alfred in the Batcave. I really think that Tomasi captures that aspect of their relationship well.

The artistic team of Brad Walker, Nathan Fairbairn, and Andrew Hennesy really complement the story fantastically with their work. Even when panels have a lot going on (the fight with the Knights of The Sun), not once did it feel overcowred. It makes for a very nice, eye pleasing and fluid complete package.

I loved the highly detailed panel page with the She-Bat transformation. It truly was some fantastic artwork and one awesome transformation scene. I like the little detail of the blood rupturing from her ears. Really drives home just how much pain the bats cries were causing her. While chase panels can be hard to pull off sometimes, I found that the artistic team captured the Batman / She-Bat chase though Gotham extremely well. One little panel that sticks out in my mind even well after reading it is when Batman is busy fighting with the Knights of The Sun, the Arkham Knight is just standing there with his eyes glowing and surveying the entire scene before he makes his entrance. It’s just an awesome frame!

Overall, I really enjoyed this issue and am really looking forward to seeing what to comes next in this arc. Being a fan of the Arkham Knight character and a fan of Tomasi’s work that he previously did with the character, I am eagerly awaiting the next issues of Detective Comics from this creative team. Personally, I would recommend it to anyone who is an Arkham Knight fan looking for a good read.

Overall, my rating for this issue : A.

If you are looking to pick up this issue, check out your local comic book shop or online comic book retailer. You can also pick it up digitally via Comixology or The DC Comics app for those of you that are digital comic readers.  For those of you that are patiently waiting on the next issue of Detective Comics, you can grab your copy of Detective Comics #1002 on April 24th 2019 or add it to your pull lists today at your comic retailer.

Feel free to let us know in the comments below what your thoughts were on the latest issue of Detective Comics, or feel free to share your thoughts on who you think the Arkham Knight is on Earth Prime?