Home » COMICS » Marvel » Dark Phoenix: History Of The X-Men Saga They Keep Coming Back To

Dark Phoenix: History Of The X-Men Saga They Keep Coming Back To

One of the most iconic comic book groups of all time integral to the advancement of both comic books and comic book stories on the big screen is the X-Men. Despite featuring an ever-changing roster of heroes over the decades, some characters loom larger than others. Jean Grey perhaps looms the largest, if only because of her penchant for turning into a nearly all-powerful destructive force. Dedicated X-Men fans will see a number of versions of this story play out in the pages of the comics, the various cartoon series, and in feature film. The second big-screen version of this story will hit theaters this summer with X-Men: Dark Phoenix. To explain why this saga is integral to the X-Men mythos, we will have to dive deep in to Dark Phoenix history.

The writer most crucial to the X-Men as we know them, other than Stan Lee, is Chris Claremont. While paired with artist John Byrne, the two of them sought to leave an indelible mark on the X-Men franchise, about 17 years old at the time. They embarked on an epic saga that featured real stakes and consequences. In fact, Jim Shooter—Marvel’s editor-in-chief at the time—was outraged by the decisions Claremont and Byrne made. Specifically, he felt that what Jean did as the Dark Phoenix made her irredeemable and, essentially, doomed the character. Eventually, young writer Kurt Busiek came up with a way to bring back Jean without undoing the story Claremont told. This controversial story is inseparable from the X-Men, with every iteration of the team telling some version of this tale.

Dark Phoenix: History Of The Character

Jean Grey, originally code-named “Marvel Girl,” is a founding member of the X-Men. A low-level telekinetic at first, Jean started her career as the weakest member of the team. Still, as time went on, Jean grew in importance. She also grew as a character. As the only female on the team, the rest of them flirted with her a lot. Eventually she paired up with Cyclops, but later she indulged in a serious flirtation with Wolverine. Still, Jean Grey became the heart and soul of the team, despite her low level of power ability. 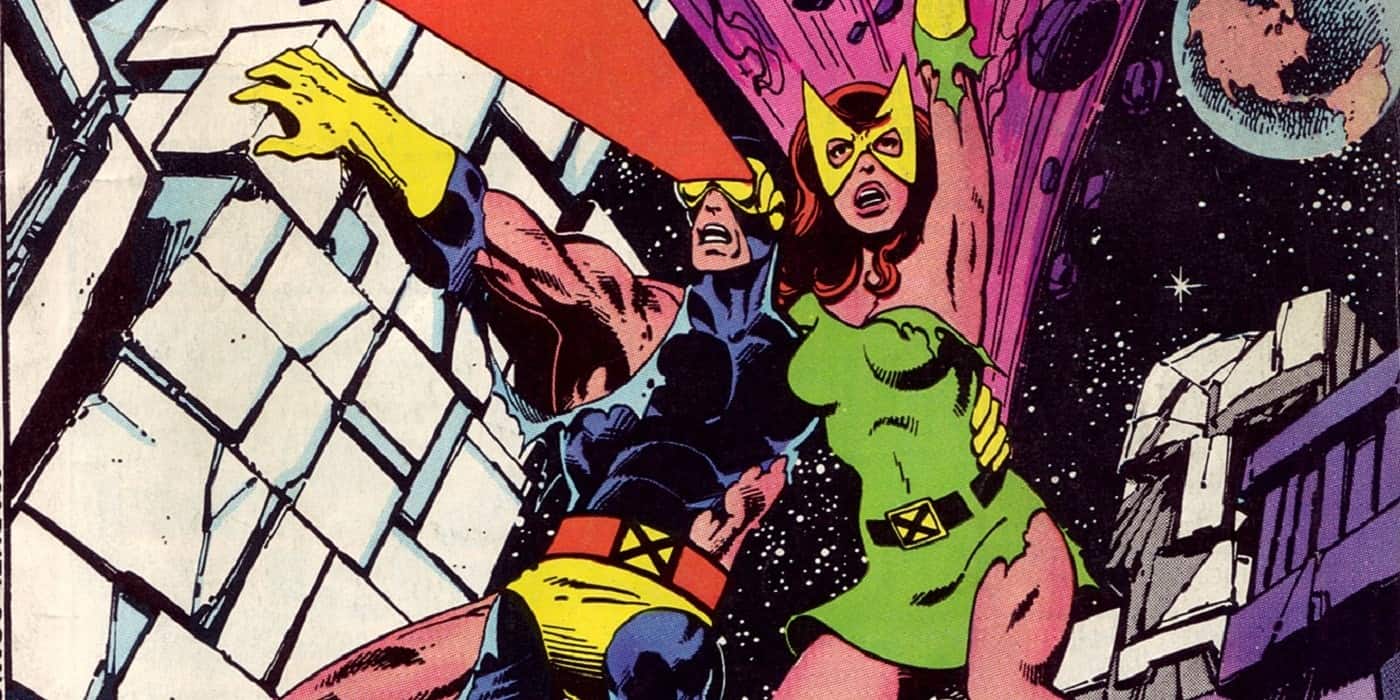 Along with telekinesis, Jean eventually gained the power of telepathy similar to that of Professor X. The writers explained this new power as a suppressed mutant ability. However, it wasn’t until Claremont and Byrne took over that Jean went from the weakest to the most powerful X-Man. They hoped to make her a female “cosmic” hero, on the scale of Captain Marvel or Thor. Yet, when “Dark Phoenix” destroyed an entire planet of sentient beings, the storytellers realized Jean Grey had to die.

Dark Phoenix: History Of The Story

The central conceit of the Dark Phoenix Saga, originally, is that Jean Grey is possessed by a cosmic power during a mission in space. This power amplifies her abilities, but it also drives her a little mad. There is debate about whether or not the “Phoenix” is a separate entity from Jean Grey amongst those who originally told the story. Though they ultimately retconned the story, so they were clearly separate beings. Claremont himself said he remained undecided on whether or not Jean is responsible for the Dark Phoenix’s evil acts. Despite the controversy it caused in the Marvel Bullpen, fans responded strongly to the story. Its legacy is one of the most defining arcs of the X-Men comics and a clear sign that comic books in the 1980s were ready to tell different, deeper stories than they had before.

Dark Phoenix: History Of Other Adaptations

More so than perhaps any other story arc, the Dark Phoenix saga is inextricably linked with the X-Men mythos. The first animated series starring the X-Men adapted the story, though they did not kill the Jean Grey character. In the next animated series, X-Men: Evolution, episodes in the third season set up Jean’s eventual transformation into the Phoenix. Had the show not been cancelled, four of the next season’s episode would have focused on their version of the saga. A third animated series, Wolverine and the X-Men did adapt the story, and they seemingly did kill Jean Grey. Finally, in the Ultimate Marvel comics, Jean Grey turns into the Phoenix but it’s never clear if it’s a split personality situation or if she truly is possessed by a malevolent goddess. Every iteration of the X-Men tells a version of this tale, which helps explain why some fans might be tired of it.

Dark Phoenix: Why It Worked

In all of Dark Phoenix history, the initial stories in the comic books are the best version of the story to date. One of the reasons this saga became so compelling is that it raised the stakes for these comic book characters in incredible ways. Specifically, the decision to have Jean Grey, as Phoenix, kill billions of sentient beings is astounding. At the time comic books rarely dealt with death in such an abstract way. If a character died, it was an individual character who meant something to the hero. Like Uncle Ben or Gwen Stacy in Spider-Man stories, death was always a personal thing. Collateral damage didn’t happen. It’s no wonder that Shooter went into a rage when one of the inaugural members of the X-Men become a genocidal killer. Not only that, the character essentially commits suicide to end the story. Pretty dark for a funny-book for kids.

This is why the decision to kill Jean Grey in the story feels so satisfying. Her crimes are unforgivable. Yet, as such an important character, fans never expected her to end up dead. Perhaps time-travel or some other space magic would help the X-Men “undo” everything that happened. Claremont and the rest of the Marvel creatives did not want that to happen. They wanted the story to have permanent ramifications, even if it meant Jean Grey spent time in intergalactic prison. The Dark Phoenix Saga is one of the many stories in the 1980s that signaled the comic book industry was growing up.

The first time the film universe tried to adapt the Dark Phoenix story, it happened in X-Men: The Last Stand. At the time, everyone assumed this would be the final X-Men movie. Series of films usually didn’t go longer than a trilogy, though the studio hoped to produce many spin-off films. Still, that movie went hard. They killed Cyclops, Professor X, and pretty much every other new mutant they introduce. Of course, the problem with this was that rather than being possessed by a “force,” Jean Grey was the villain. Professor X used telepathic magic to suppress her abilities. Once those blocks were undone, Jean just became incredibly murderous for no reason.

With the successful reboot of the X-Men franchise using younger actors but maintaining the same “universe,” it appears they wanted to give this story a second shot. This time, they will incorporate the space element, rather than making Jean go “dark side: just because. Still, with extensive third-act reshoots behind it, people are worried that this film will be as troubled as its predecessor. The last outing of this new iteration of the X-Men, 2016’s Age of Apocalypse, faced heavy criticism, though some fans absolutely loved it. Still, because of that perception and that we’ve seen this story before, X-Men: Dark Phoenix faces an uphill battle against fan expectations.

Dark Phoenix: The End Of The X-Men

The Dark Phoenix saga is so important to the franchise because it truly represents the “end” of a chapter for the X-Men. With the death of founding member Jean Grey, it sends a signal to fans that “nothing will be the same again.” The serial nature of comic books means that no good characters stay dead for long. However, in the films, those deaths tend to stick. It’s also fitting that writer and director Simon Kinberg chose this for the next film, because it also represents the end of the first connected universe of superhero movies. This X-Men universe proved not only that grounded, modern superhero tales are possible but also paved the way for long-lasting film series.

This year, Disney purchased all of 20th Century Fox’s movie and some media assets. This means that Marvel Studios and the X-Men are finally owned by the same company. No one outside of those companies knows what they are going to do now that this is the case. All that’s certain is that the X-Men movies as we’ve known them are almost certainly done forever. With Hugh Jackman hanging up his claws as Wolverine, only Ryan Reynolds’s Deadpool is likely to grace the big screen again. The question remains if X-Men Dark Phoenix will be a fitting end to the universe that ushered in the modern superhero movie age.

Recap: Game Of Thrones Spoilers Kicked Up Controversy Before Devastating Episode
Noah Centineo Movies That Are Making Him a Rising Star