Home » TV Shows » The Wheel of Time Season 1 Finale Takes Us To The Eye Of The World: Spoiler Review

The Wheel of Time Season 1 Finale Takes Us To The Eye Of The World: Spoiler Review

The cold open for “The Eye of the World” takes us back 3,000 years to the Age of Legends. Here we finally meet Lews Therin Telamon – called the Dragon. Alongside him we meet a surprising figure – Latra Posae Decume. The two of them were the joint heads of the Aes Sedai in this time, and we see them arguing about how to beat back The Dark One. We learn a bit about The Dragon’s plan to travel to the Dark One’s prison and strengthen the seals. Latra is opposed to this, and we see the division between the men and women of the Aes Sedai forming.

This was a surprising flashback for the show to include, since it was not in the books. The show has done an admirable job depicting events and relationships that largely occurred off-page in the books. It is one of the greatest strengths of the The Wheel of Time from the season 1 premiere to the finale. These scenes fill in those gaps left to readers’ imaginations. Next season we will likely more of these flashbacks, as the current Dragon begins to remember his former life.

At the end of the last episode, we learned that Rand al’Thor is the Dragon Reborn. He and Moiraine have snuck away from their friends under cover of darkness, to enter the Blight. This is the dead zone created by the Dark One’s influence. We learn that it has been growing rapidly in recent years, proof that the Dark One is growing stronger. Moiraine and Rand traverse this twisted forest, and our Dragon finally has a chance to speak to the dark figure who has been haunting his dreams. 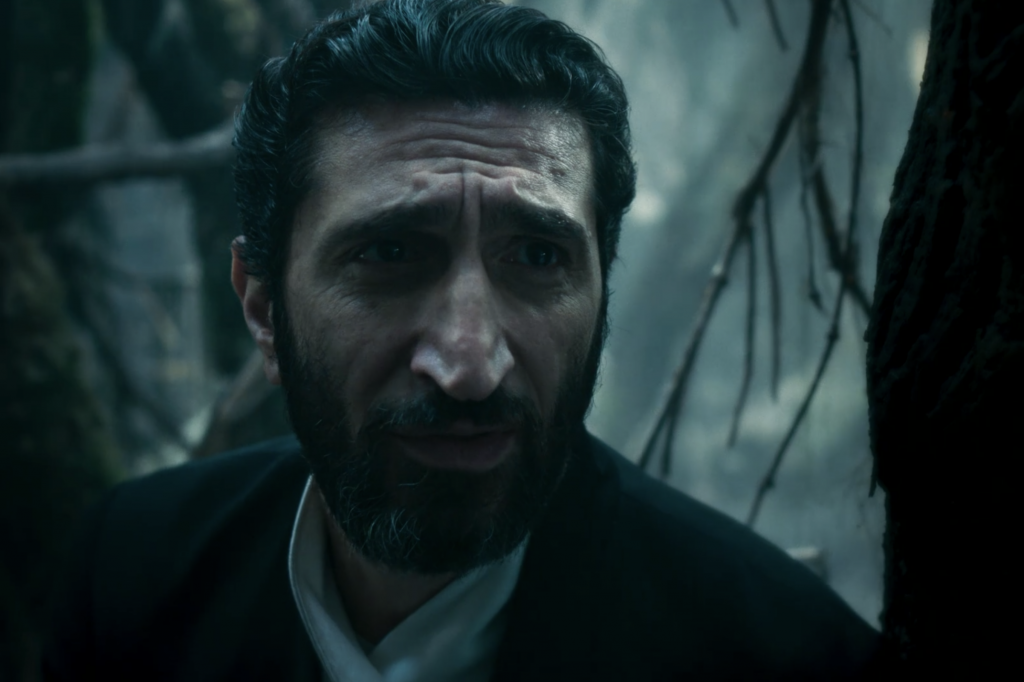 This character is named Ishamael, and the show doesn’t do a great job clarifying that he is not actually The Dark One. Rather, he is one of the Dark One’s servants. Ishamael is one of the Forsaken, an ancient Aes Sedai who turned to the Dark during the Age of Legends and was not fully trapped with his master. More importantly, Ishamael knew Lews Therin Telamon – the last Dragon. He studies Rand and says that although they look different, he can see Lews Therin’s soul inside of Rand. And because this is a Forsaken who loves to talk, he also ends up teaching Rand a bit about channeling. Hey, he has to learn from someone because the women of the White Tower cannot teach him how to wield Saidin.

The Battle for Tarwin’s Gap Begins

Back in Fal Dara, Rand’s friends are in disarray. Egwene is hastily throwing her clothes into a bag, determined to chase after her beloved. Perrin stops her, knowing that there is little they can do to help their friend. But Nynaeve takes matters into her own hands, tracking down Lan and encouraging him to go after his Aes Sedai and bring back her friend.

All of this is interrupted by an army of Trollocs at the gates of the city. The rulers of Fal Dara prepare for battle, and every woman who can channel is needed in defense of the city. Egwene and Nynaeve are quickly conscripted to join a circle of other women. Lady Amalisa – sister to the ruler of Fal Dara – leads the circle. Any woman who can channel, can also lead a circle and accomplish great things with the One Power, no matter how strong she is personally.  The strength lent by the other women of the circle makes up the difference. Like the rest of the season, The Eye of the World keeps its eyes (and ours) on the women in the cast.

What Will Become of The Horn of Valere?

What ensues is a dramatic and beautifully choreographed battle. The Battle for Tarwin’s Gap was minor in the first book, and the showrunners made a few changes to bring it to life on-screen. So, while we don’t get to see Rand destroy an army of  Trollocs all by himself in The Wheel of Time season 1 finale, we do get to see our other characters in action.

Perrin aids some of the soldiers in retrieving a precious artifact from beneath the throne – the Horn of Valere. In the end, they probably should have left it where it was. Because it is only a matter of time before that old peddler Padan Fain shows up and confirms that he is a Darkfriend. He has been tracking the Ta’veren since the Two Rivers, and somehow managed to get his hands on the dagger that almost destroyed Mat. Fain taunts Perrin for a while, before stealing the Horn of Valere. This will have dramatic repercussions next season.

Living In A Dream World

Back in the Blight, Rand and Moiraine finally find the Eye of the World. Unfortunately the show decided to cut out one of my favorite bits from the book  – the Green Man who tends to the Eye. What we see instead is the ancient Aes Sedai symbol on the floor, and Rand begins to remember what Lews Therin did there so long ago. But all too quickly he is entrapped by Ishamael, who throws him into a dream world. Rand envisions his life with Egwene – what it could have become if they had stayed in the Two Rivers. Ishamael tells him that he could have all of this, and remake the world in his own image. If only he would join force with the Dark One.

Rand rejects this false reality, as he gazes upon Egwene. He knows that as much as he wants this, it is no longer what she wants. Egwene has a higher calling now, as  Siuan Sanche told her not so long ago. She is destined to become an Aes Sedai, and they will never get to have that comfortable quiet life in the mountains. It is a heartbreaking scene, played to perfection by Josha Stradowski.

Egwene herself is feeling the effects of the One Power at that moment. The circle of women is drawing an immense amount of the One Power. Women around her are starting to burn out and die. Egwene can feel the Power draining her too, but she is powerless to control the weaves that are being fed to Amalisa. With a great final burst of the One Power, Lady Amalisa destroys the army of Trollocs and burns herself out in the process. This hearkens back to the story of Manetheren, and how Queen Eldrine burned herself in a similar fashion.

In the end, only Egwene is still standing. Even Nynaeve has fallen, and Egwene clutches her mentor close. It appears that Nynaeve has also been burned out, but a gentle flow of the One Power brings her back. It is unclear to me whether or not Egwene consciously channeled to heal her friend, or if Nynaeve’s strong Talent for healing helped her. This is one nitpick I have with the way channeling is shown on-screen. It is not always clear who is channeling, since we cannot see who is manipulating the weaves of the Power. Although this is an extremely compelling moment, it is a bit confusing.

But the ladies aren’t the only one channeling in the season 1 finale for The Wheel of Time. Rand makes his decision to walk away from the perfect life Ishamael tempts him with. Rand reaches out to channel, saidin swirling around him in black and white threads. He uses the One Power to destroy Ishamael. In doing so, he also cracks the stone beneath his feet. Unfortunately this was one of the weakened seals of the Dark One’s prison – now broken. This wasn’t the Last Battle after all. It was merely the first of many.

In the end, Rand walks away from Moiraine and his friends. He has felt the taint on the male half of the One Power, and he fears the madness. Rand knows that he cannot return home to the Two Rivers, nor can he return to who he once was. He leaves Moiraine at the Eye, where Lan finds her. She is shaken by the knowledge that this was only the beginning, and not the end. But her own path has become fraught now, because she can no longer touch the One Power. It seems that Ishamael has shielded her and tied off the weave. No one but a male channeler can undo it. (It is unlikely that Rand could have done it at this point, because he still knows next to nothing about channeling.)

So, we reach the end of season 1 of The Wheel of Time with the Dragon Reborn striking out on his own. Where will Rand go from here? Will Nynaeve and Egwene return to the White Tower to train as Aes Sedai? Can Perrin track down Padan Fain and the Horn of Valere? How will the series handle Mat’s storyline next season as they bring in a new actor to play the role? And who exactly are the mysterious invaders we glimpse at the end of the episode?

All of these questions and more will be answered in season 2 –  which is currently filming. The Dragon will ride again on the winds of time as the Wheel continues to weave this excellent adaptation on Amazon Prime.