For quite some time now, fans of The Walking Dead have been wondering what happened to the Oceanside community. In season 7, we first met the residents of this group. It was a mostly female community after the Saviour slaughtered most of the male population. Oceanside was one of many communities that the survivors of the show visited, alongside Alexandria, Hilltop, and the Commonwealth. However, the writers neglected to explain what happened to the Oceanside residents until relatively recently. There are spoilers ahead for the latest episode of The Walking Dead Season 11 – you have been warned!

In the latest episode, Faith, we finally got confirmation about what happened to Oceanside. Earlier in the episode, the writers clarified that only four communities had survived. These are the four mentioned earlier, including Oceanside. Like other communities, Oceanside is extremely private, rivalling even the Civic Republic Military. They are also located near the sea.

Later in the episode, we finally got an answer to what happened to this group. However, the writers, unfortunately, gave some rather disappointing results.

What happened to the Oceanside Community? Previously, the team comprising Aaron, Lydia, Jerry, and Elijah were noticeably missing from the show. They hadn’t appeared for two episodes in The Walking Dead Season 11 after the shocking revelation of new walker variants. Eventually, the group stumbles upon Jules and Luke, who also disappeared for a long time. In the real world, this was because Dan Fogler had been working on other shows and films. In the show, we saw the pair at Oceanside, and they revealed they were outside when the Commonwealth took the location for themselves.

Unfortunately, aside from Luke and Jules, we’ve seen nobody else from the Oceanside community. Notably, we haven’t even heard about the leader, Cyndie, and where she’s gone. Other members, like Rachel, are also suspiciously absent. Unfortunately, The Walking Dead Season 11 didn’t reveal much about what happened to the rest of Oceanside. Perhaps we’ll see it through flashbacks in future episodes, but it’s rather unlikely. Since the Oceanside community were pretty self-sufficient, many of them likely survived the initial attack.

Of course, even if the writers don’t address Oceanside in later episodes of The Walking Dead Season 11, it’s not that big of a deal. After all, the citizens mostly appeared in the show as a plan B. The writers used them to help solve major problems for the show’s main characters. For example, they used molotovs to protect the Hilltop community against the Saviors. Even so, being so isolated means there’s no real reason for the Oceanside community to make further extended appearances in the show. 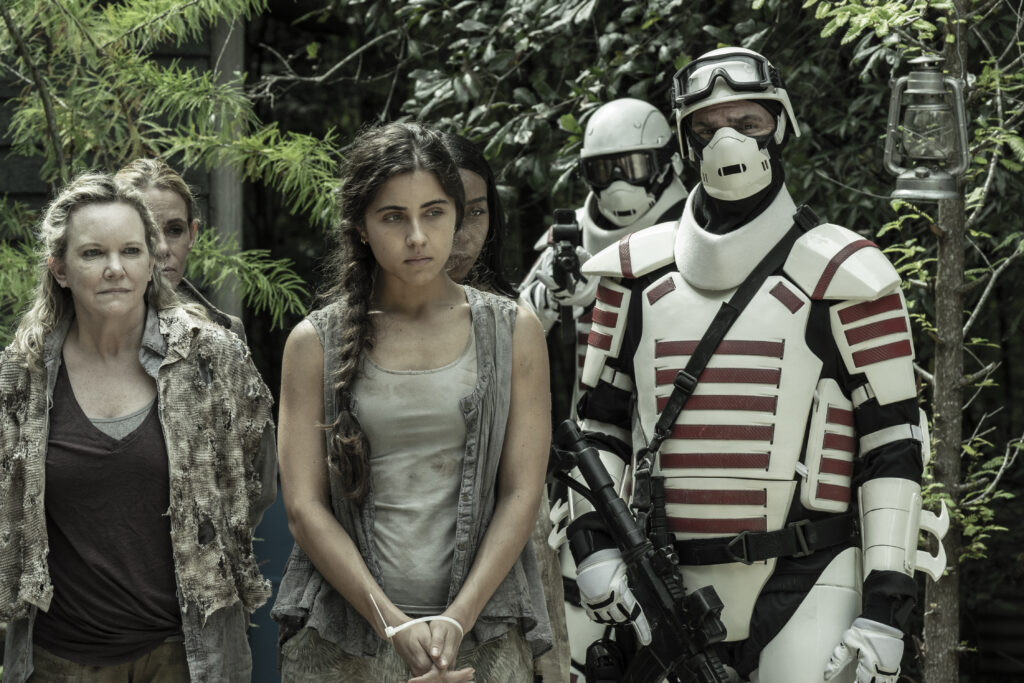 In the show, the writers deliberately included Lance with Oceanside to create a tense cliffhanger. Unfortunately, this tension quickly disappeared because it didn’t mean anything. Oceanside is not important to the world of The Walking Dead. Although we would like to see the community explained in further episodes of The Walking Dead Season 11, it makes sense for the writers not to include them. After all, even Ross Marquand, who plays Aaron, said the season doesn’t have enough time to look at Oceanside, too.

As such, it appears that the show’s final season is going to be a tight one. There are plenty of plot threads and unanswered questions for the writers to address. Additionally, the writers have confirmed they’ll try to answer each of these points. Perhaps we’ll see an Oceanside spinoff and learn about what happened there. Or, maybe they’ll show us in future episodes of Tales of the Walking Dead.

You can catch new episodes of The Walking Dead Season 11 exclusively on AMC. Or, you can watch episodes a week early on their streaming service, AMC+.