Three months ago, the Star Trek: Discovery season 3 premiere began with a sequence showing how one man toiled alone in service to the idea of the Federation. Throughout the entire series, much to some “fans’” consternation, Sonequa Martin-Green’s Michael Burnham often found herself at odds with the Federation, or at least people in power there. So, this season was all about showing her commitment, and that of Discovery’s crew, to the “perfect system” created in the future of Star Trek. In the Star Trek: Discovery season 3 finale, Michael Burnham finally get put in her proper place. And, it’s a place that will arrange the (sometimes toxic) Star Trek fans who so vociferously object to this series. Yet, the flagship TV series of the new era of Trek also finally found its place.

With a new season already in pre-production, the season 3 finale of Star Trek: Discovery sets up yet another new status quo. However, this finale is one of the few, like the recent finale of The Mandalorian, that has an air of finality to it. It is easy to see how this could have served as the series finale of the show if a renewal hadn’t happened. Cliffhangers are great ways to get people to tune in for the next premiere, but it’s nice to get a complete story. This episode doesn’t so much end in a cliffhanger, but rather an open path in which these characters could on living in fans’ imaginations having adventures and/or being happy. 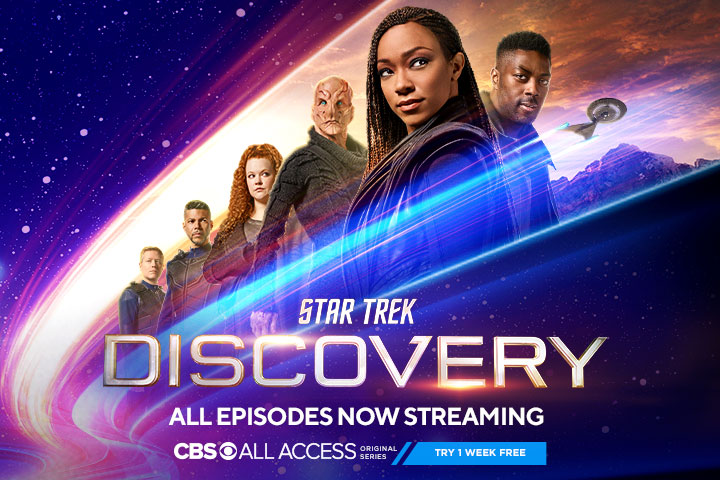 Of course, it’s not all good news. One major character’s fate is left more up-in-the-air (or, down on the ground, more accurately) than others. Still, this was a great end to a near-perfect season of TV.

The Slow Part of the Season 3 Finale of Star Trek: Discovery Is an Emotional Journey

The finale picks up where the episode Su’kal left off, with the away team from Discovery stuck in a heavily irradiated ship on the surface of a planet at the center of a nebula. If I have any complaints about this season it’s this bit, honestly. The mystery of what caused “the Big Burn” that destroyed all of the dilithium in the galaxy is…unsatisfying and unclear. Su’Kal, a kelpian child left on a Starfleet vessel, caused it when his mother died. There is a whole scene of classic Star Trek techno-babble, but it doesn’t really satisfy.

The intention of this storyline is clear. It’s both meant to highlight the compassion and care that Doug Jones’ Saru, Wilson Cruz’s Dr. Culber, and Blu Del Barrio’s Adira have. Su’Kal is a (deliberately) frustrating character. His journey, which I admittedly didn’t care much about, is at the center of the team’s salvation. Perhaps with more space to tell this story it could have played differently, but there was admittedly a lot going on in this episode.

One highlight of this sequence however was that we see the return of Ian Alexander’s Gray Tal. Thanks to the holo-technology on the ship, he was able to be seen by not just Adira. Gray is a fun character, and I hope we get to see more of him in the next season. The other major development here is Saru took a leave from Starfleet to take Su’Kal to the kelpian homeworld. While I am sure this is not the last we’ve seen of the character, he may have a much smaller role to play in the future. Much of his character’s journey has been about trying to go back “home,” and with Su’Kal (a deeply damaged individual) he’s also got someone to care for.

In the third episode of the season, Michael Burnham took command of Discovery during a battle over Earth. That sequence was a clear indicator that in command is where that character deserves to be. In fact, many of her controversial actions—such as defying orders to help Book’s home planet—would be wholly uncontroversial were she in command. This is the moment that the entire series has been building to since she mutinied in the pilot episode. What makes this exciting is that there is a hardness to Burnham that none of the other captains (save perhaps for those from the Mirror Universe) had.

During the battle to retake Discovery from the Emerald Chain invaders, much of which took place during the penultimate episode, Mary Wiseman’s Ensign Tilly is in command. In the season 3 finale, she has to send her crew on a classic Star Trek suicide mission to retake Discovery. However, she asks the crew (twice!) to undertake it, when any other Captain would have ordered it. Signing up for Starfleet means possibly going to your death for a greater cause, but Tilly didn’t have it in her to order people to take that risk. (Luckily, the new sentient droids on the ship saved everyone’s life on that mission.)

The end of the episode shows Burnham taking command of the ship and leading the effort to reconnect the galaxy with a new font of dilithium. Again, the weakest plot elements of this episode were the Big Burn answers, and they don’t make a lot of sense. If anything, the series should have focused more on the Big Burn and left the Emerald Chain conflict for next season. While what we got was great, it does feel like we didn’t get enough of either story.

The Future of Star Trek: Discovery

Even though there was a finality to this episode, there is plenty left to talk about in season 4. A main source of tension will likely be Anthony Rapp’s Paul Stamets and Burnham. In the epilogue, he very clearly snubs Burnham, not forgiving her from expelling him from the ship. Like most of what Burnham has done in the past, she makes the “right” call, but painful consequences linger. In fact, I’d not be surprised if he leaves the ship (temporarily) because David Ajala’s Cleveland Booker can also pilot the Discovery’s spore drive.

More interestingly, the galaxy of the 32nd century is now fully open to both the Discovery and the rest of the Federation. In a way, the future of Star Trek: Discovery could look a little like the most under-appreciate series in the universe, Enterprise. That show was about how the first Starfleet exploration mission led to the building of the Federation. Yet, that story was cut short when the series was cancelled. The new path Discovery may take could show how the United Federation of Planets will be rebuilt. Yet, since they are also giving dilithium to systems not aligned with the Federation, this means that they could be, technically, empowering future enemies. Nonetheless, whatever direction the show takes next, it’s going to be an exciting ride.

All episodes of Star Trek: Discovery are available on CBS All Access.

What did you think of the season 3 finale of Star Trek: Discovery? Share your thoughts, reactions, and theories about where it might go next in the comments below.

The Road to DC Future State Starts With An Epic End to Another Event
How Microsoft Tried to Buy Nintendo, and Why It Didn’t Happen