Nobody likes to face rejection, especially in the movie industry. Unfortunately, this is a part of the industry that people must accept. Not every project will be successful; not every application will go through. That doesn’t mean it won’t be successful eventually, though. Some of the best movies and TV series started their life through numerous rejections, particularly within the Marvel universe. For example, the studio rejected Matthew McConaughey‘s attempts to play Hulk, going with Edward Norton instead. Morena Baccarin auditioned for the role of Maria Hill in The Avengers before taking the role of Vanessa from Deadpool. Even a huge Hollywood star like John Cena faced rejection for the titular role of Deadpool before he switched to the DC franchise. Rejection happens to everyone – and She-Hulk Attorney at Law writers are no exception!

The lead writer for She-Hulk Attorney at Law, Jessica Gao, recently spoke in an interview about how Marvel Studios initially gave her rejection. In fact, they actually rejected her no less than three times on other projects! She said this about finally joining the show:

“For me, I mean, I was elated because it was a dream job, but also, I’d been rejected by Marvel three times on previous projects. So I was like, ‘Guess fourth time is the charm. It worked! It was the right project. I’m glad they rejected me so many times.”

Additionally, Ginger Gonzaga, one of the She-Hulk Attorney at Law actors, praised Gao’s inclusion. She said:

“But you are perfect for She-Hulk because Jessica actually pitched herself as being like, ‘I know more about She-Hulk than anyone,’ which is the facts. And so, the universe waited for the one that was right for you.” Later, Gonzaga went on to describe her reaction to getting the role in She-Hulk Attorney at Law:

“I was very excited, but it was juxtaposed with the fact that my puppy had just relieved herself in my living room… It was a real, ‘Wow! I’m gonna be in the Marvel-verse! One sec. Let me clean up after my puppy I haven’t trained.’ So it was a very humbling instant thing afterwards for me.”

In a separate interview, Gao spoke again about her failure with previous Marvel Studios projects. In fact, she actually revealed that she originally wrote a script for the Black Widow movie in 2021. Her version of the movie also included the character of She-Hulk, although this had the opposite effect:

It was probably good that she faced this rejection, or we wouldn’t get She-Hulk Attorney at Law starring Natasha Romanov. Gao appears to feel the same way, too:

“Clearly there was a reason why I didn’t get that job. I really do believe that all of that was for a reason, because ultimately, at the end of the day, the thing that I really wanted was ‘She-Hulk’ and those other projects weren’t ‘She-Hulk.'” 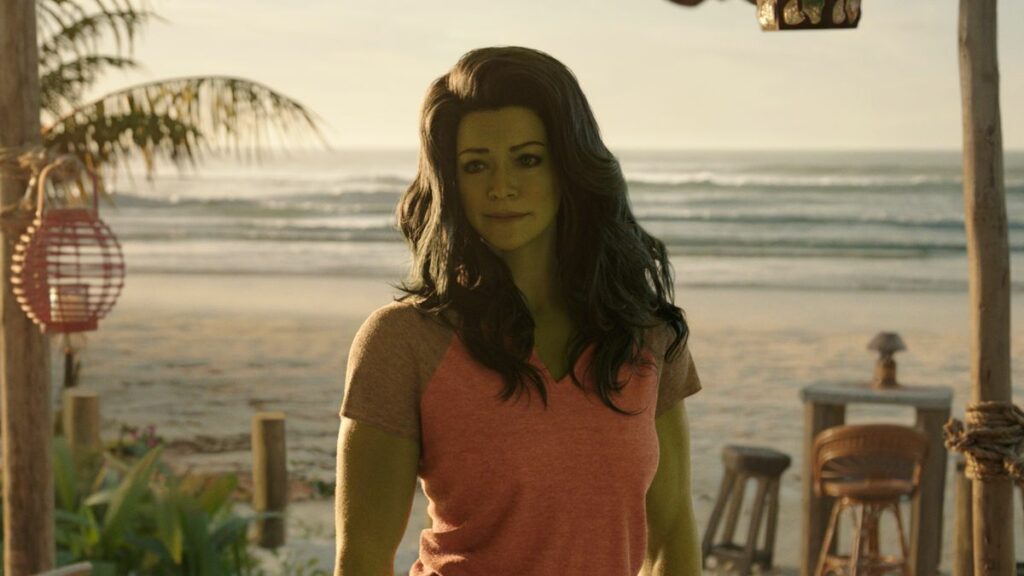 Jessica Gao has worked on several highly successful projects. One includes the animated hit show Rick & Morty and Silicon Valley. In fact, she was nominated for two Writers Guild of America Awards and also won an Emmy for her work. So, it is no surprise that her name is part of the She-Hulk Attorney at Law crew.

Although the rejection must’ve been initially painful, we’re glad she got the chance to finally show off her skills with this series. After all, Gao has a terrific blend of comedy and drama. Her previous work has shown how she can create powerful and believable female characters. We’re sure she’s done the same for She-Hulk Attorney at Law!

However, what’s unclear is the other two Marvel projects that she faced rejection for. It’s possible that one of them was WandaVision since its mix of comedy and drama seems right up Gao’s street. Perhaps she’ll reveal the failed projects in the future.

You can catch She-Hulk Attorney at Law exclusively on Disney+, starting on August 18th.