One of the most iconic of Stephen King’s stories is The Stand. At the time of its release, the publishers cut quite a bit of it down. Then, as King’s own legend grew, they re-released it with all the cut portions put back in. Now, the live-action adaptation of this story gets the same treatment. A network television mini-series brought the characters to life in 1994. This year’s The Stand, a limited series from CBS All Access, aims to tell the full story, including characters cut for time and language cut because it was network. Yet, this series, for all its ambition suffers from incredibly bad timing. This is a story about an apocalyptic pandemic bringing about the end of the world. Are people eager to see a pandemic story when they’re already living one?

We’ll get to the stellar cast, great performances, and interesting structure of the series in a moment. First, we should talk about the pandemic of it all. Yes, Captain Trips is worse than COVID-19 by several orders of magnitude. In fact, beyond the fact that they are both viruses they share little in common. Yet, the issues at play in the parts of the story set before the world dies feels very relevant to today. People denying the virus is a big deal, the government lying to people, and so on. (However, the actual details could also bolster the crazies who think that COVID-19 is bioweapon.) This may not be the kind of escapism people want right now.

Which is a shame, honestly. Because The Stand is Stephen King’s biggest epic set on a single plane of existence. (His biggest epic is, of course, The Dark Tower.) And this is a very worthy adaptation of that story. 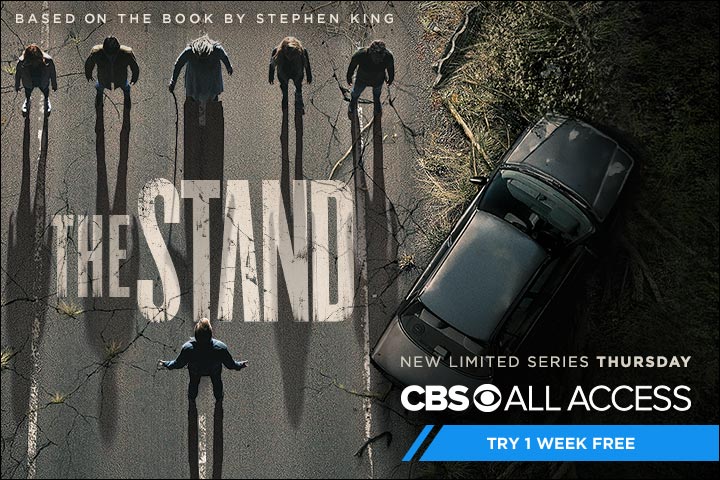 Everything Great About The Stand So Far

CBS All Access sent out about two thirds of the episodes in the series for early review. Unlike the four-hour miniseries from 1994, this show has space to breathe. (Unfortunate pun not intended.) Throughout the episodes, actors both recognizable and not-so-much deliver intense performances. Heather Graham and J.K. Simmons both appear in roles that don’t take up much screen time but leave an impact on the characters and the audience. The visual effects are also intense, delivering all-too-real scenes of people losing loved ones to this dread disease. Again, this feels like one of those things that bad timing will hurt. It’s easy to imagine how people who are fans of Stephen King but lost a loved one or two to COVID could choose to skip this.

It’s worth mentioning that in The Stand limited series, like in the book, the pandemic is really just a means to a larger end. Forces of “good” and “evil”—as represented by Whoopi Goldberg’s Mother Abigail and Randall Flagg played by Alexander Skarsgård—face off for the soul of humanity in the story. We see characters who are “bad” people realize their full moral potential in the new world after the plague. Other characters who seem good (or at least “okay”) end up broken and make immoral choices. Mother Abigail and Flagg may be pulling strings, but it’s the choices of the individual characters that help or hamper their plans.

This struggle between good and evil is just as powerful as it was in the book or the other adaptation. Unlike the 1994 The Stand series, however, the characters have space to be in the moment rather than just barreling down a highway of plot points. Of course, that’s not always a good thing.

The Structure and Pacing of the Series Is Slightly Off

The thing about The Stand limited series that I found most troubling is the non-linear structure of the narrative and the pacing. Ironically, I worried when I started up the first episode if I wanted to sit through what I assumed would be an hour of the pandemic gripping the world. However, the series opts for a more non-linear narrative that does make the storytelling a bit more engaging for those of us who know the story very well. Yet, I feel like those who aren’t as familiar with the book, the mini-series, and the graphic novel adaptation may find themselves lost. Characters will jump from pre-pandemic times to already being ensconced in the Boulder Free Zone.

On one hand, this can make certain characters’ betrayals feel more like a surprise, but it also could make them feel less earned. For example, when Nadine Cross shows up, fans who know will be excited. Viewers who don’t could just be confused. I am just guessing, but I suspect people very familiar with The Stand will like the show better than those who haven’t read the book a number of times.

The pacing also presents an issue. Quiet character moments are somewhat overshadowed by curiosity about how the characters end up where we see them. It also feels as if we bail of out of certain characters’ stories just when things are getting interesting. With an ensemble this large, I worry that we don’t spend enough time with individual characters at first. Unless you already have an awareness of who Larry Underwood, Stu Redman, or Nick Andros are, you may end up confused or disconnected from them in the early episodes.

The Stand Limited Series Review Score: Worth a Watch

Still, this is a well-done series with a clear love of the source material. Changes have been made here and there, but the overall impact of the story and characters remains the same. The Stand limited series is a worthy adaptation and worth watching. However, it may be one of those stories that gains popularity over time rather than becoming an immediate sensation like The Mandalorian. Audiences may appreciate it more after the sting of our real-world pandemic softens for them. They may also appreciate it more after reading The Stand novel or graphic novel first.

And, I have to add, despite the perfection in the performances some characters will forever be defined for people of a certain age by who played them in the 1994 mini-series. Stu Redman is Gary Sinese to me. All due respect to Nat Wolff, but the late Miguel Ferrer is Lloyd Henreid. Ezra Miller makes for a great Trashcan Man, but Matt Frewer also played that role to perfection. Still, this is a silly quibble and the actors who take on these roles in The Standi limited series do wonderful jobs all around.

The Stand limited series will debut on CBS All Access on December 17, 2020.

What do you think? Share your hopes, fears, and expectations about this series in the comments below.