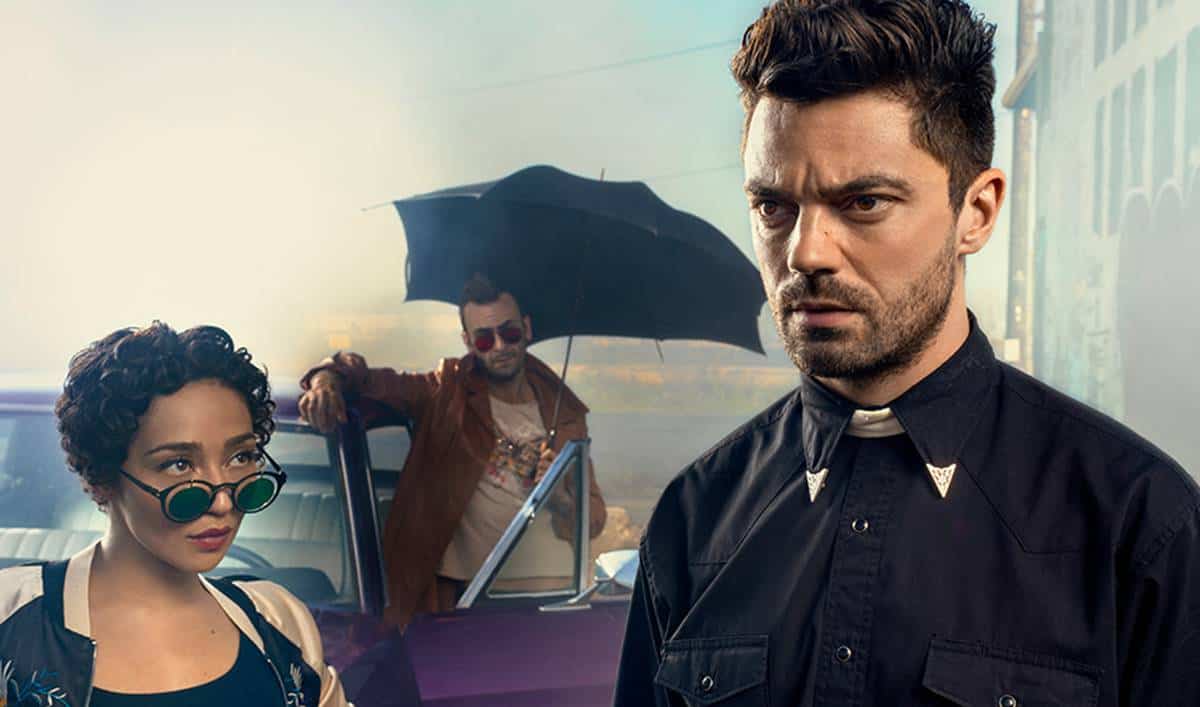 Preacher is not necessarily a pop culture powerhouse like Game of Thrones. Yet, this show draws from a smaller but equally loyal reader base and found new fans on television. Preacher executive producer Seth Rogen also said the show wouldn’t burn out and die like Game of Thrones. He even went so far to say that questions about Game of Thrones should be sent his way, seeing as the George R.R. Martin adapted showrunners skipped Comic-Con this year. That tone is key to Preacher, mixing irreverent comedy and fast-paced, apocalyptic action. Having seen Preacher at Comic-Con doing what it does best, we now know the show is wrapping things up in season four.

Rogen noted that the show would be ending in its fourth season. Upsetting for some, but also a great example of ending a series on the creators’ own terms. Preacher at Comic-Con highlighted how the series is an example of how comic book adaptations can be done for smaller, lesser-known properties. The show is wonderfully creative and good at using its source material. Stars Dominic Cooper and Ruth Negga were joined by Mark Harelik (God) and Julie Ann Emery (Lara), alongside Rogen. So, the show’s ending. What does that mean for our favorite characters?

What’s to Come in Season Four? What we Learned from Preacher at Comic-Con

The fourth season is going to certainly end the show on a high note. For starters, the main antagonist is literally God. That’s right, the big man upstairs is wreaking havoc while he goes power crazy. Jesse, Tulip, and Cassidy go head-to-head with the creator of the universe, which certainly worried Rogen. He notes that AMC only made him change one scene in the final season. Luckily, it was more laughs than plot. The production team feels confident that fans will love the ending to the show. How do Rogen and company gauge their success?

“I know what the comics space is like,” Rogen continued. “The fact that no one has assassinated me means that we did a pretty good job.” Rogen added, “It’s the first show that I produced, the first that I directed, the first comic I really loved, and so it’s crazy that we got to do this.”

The trailer shown at Comic-Con is not out yet for the public. It’s likely going to release sometime soon for the show’s promotion. For now, fans wait patiently for the end of the summer. Sure, it means the slowing down of warm weather, but it also means season four’s debut. Fans can tune into the final season of Preacher August 4th. Better yet, the show debuts with two back-to-back episodes.

Looking back at Preacher at Comic-Con over the years, it’s sad to say goodbye. Then again, look at what the Game of Thrones experience says about making a great show. It’s easy to get rolling but ending it can be tough. That’s the thought behind a season four exit for Rogen. Do it right, say goodbye, and leave feeling good about your work. Now, we begin the countdown to August.

Pennyworth At Comic-Con Has Us Asking, Batman Who?
The Expanse Brings Season Four Trailer To Comic-Con