Marvel Confirms That Loki Is Gender-Fluid - Why It Matters

Have you ever fallen in love with a show before watching its first episode? For us over here at Comic Years, we experienced this feeling every time we thought about Loki ahead of its June release. The series continues to promise something new and innovative for a franchise once accused of causing superhero fatigue while also developing a character we thought we knew. In a recent attempt at teasing a new beloved addition to Disney+, Marvel dropped a pretty important hint about our favorite God of Mischief: Loki is gender-fluid. While this could be a fun easter egg referencing comic books, we think this announcement means more. So, let’s dig into what it means to be gender-fluid and why it’s important for the character of Loki.

Loki Is Gender-fluid – Say What Now?

Our biological sex is rooted in our genetic makeup. Some people may be female or male, while others are intersex or something completely different than our old binary understandings. But one’s gender identity will sometimes look different than what we once knew about X or Y chromosomes. When our understanding of our own sex and gender isn’t always black and white, that’s often called gender fluidity. Somebody who is gender-fluid might identify with their assigned sex at birth one day and find themselves at the opposite end of the spectrum on another day. They may explain their gender as a woman one day and a man the next, or maybe agender, genderqueer, non-binary, or otherwise.

Like with all genders, gender identities, sexual orientations, and everything else that fits under the rainbow of queer identity, we have come to learn that a lot of the time, people don’t really care for labels. After all, our identity and expressions of them don’t have to be public knowledge, and sometimes we don’t even understand them ourselves. But for others, a label like gender-fluid can be vital to understanding yourself. They can be used as a way of saying, “Hey, I know myself better than anybody else, and this is what I am.”

Our understanding of gender fluidity has continued to evolve as more people express a desire to share their identities. In relating this to the Marvel Cinematic Universe, we’re thrilled to see that one of the most beloved characters is explicitly gender-fluid. And it’s not just a fan theory- it’s confirmed on Twitter for the world to see and learn from.

How Loki Being Gender-Fluid Makes Sense In The Cinematic Universe

Loki is, to say the least, a complicated character. His moral alignment is all over the place but is best described as “chaotic.” Forget chaotic good, neutral, or evil. He’s plain chaotic. For better or for worse, we love him for it. In his latest adventure within the MCU, Loki has landed in the Time Variance Authority, a place that monitors the various realities within the multiverse. He’s going to have to help fix some interferences to please the TVA workers. Are we confident that he won’t cause even more trouble? Nope.

Loki Laufeyson, an adopted Asgardian, is a lot of things. A single binary sex is not one of them. In his TVA files, the above teaser clearly states that his sex is “fluid.” Fans of the character aren’t surprised to see this label, as he has always been explicitly queer. And no, we aren’t just talking about the queer coding in the bisexual superhero flick Thor Ragnarok.

A History Of Shapeshifting And More

As discussed, we all know Loki to be a trickster. That’s kind of his whole thing, isn’t it? It’s obvious that he has used his shapeshifting abilities to play pranks or deceive others, including turning into simple beasts like snakes. But over his hundreds of years on various planets, this Avengers-adjacent character has done more than turn into things for fun. It’s impacted his entire identity and way of being.

The character has turned up in various comics as the Loki we’ve all grown accustomed to. He has also appeared as other incarnations, like Lady Loki. This slightly more stylish version of Loki is the same character while showing how gender fluidity can work in a shapeshifter.

When it comes to those with the ability to shapeshift, the simple act isn’t enough to claim fluidity. I’m pretty sure that most of us can agree that we’d capitalize on that power if we had it. But a simple change in appearance doesn’t indicate such an internal change. We can once again look to the comics for clues that show the importance of differentiating between gender-fluid individuals like Loki and plain ol’ shapeshifting.

In 2014’s Loki: Agent of Asgard comic, the titular character is referred to with “my son, and my daughter, and my child who is both,” by Odin himself.  This tells us all that we need to know to uncover the truth behind Loki’s identity. He’s gender-fluid, and this is completely canon within the Marvel universe. 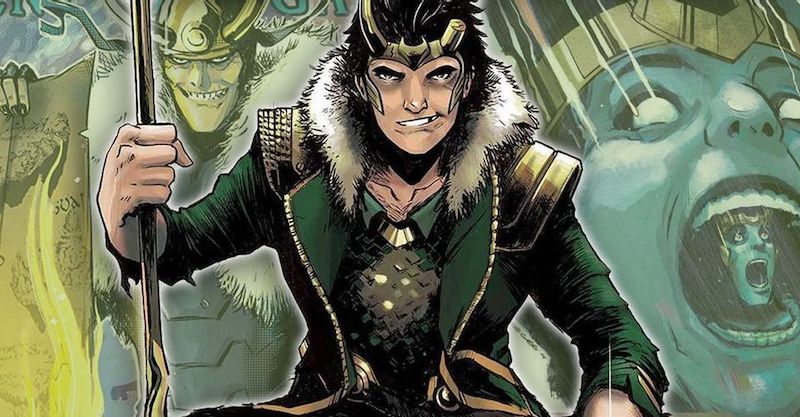 Why Now? Is Marvel Just Capitalizing On Pride?

We’ve seen it in the comics. But why wait this long to explore Loki’s identity even further in the cinematic universe? One could argue that it’s because of Disney’s hesitance to feature explicitly queer characters. Most instances of inclusion have been incredibly brief. They’re often not shown on camera at all! Though, we think there’s a good chance they have been waiting for just the right time. With Loki giving the character plenty of time for exploration over (at least) an entire season, this piece of information may get a chance to be properly portrayed.

In addition to the functional reasoning for including Loki’s gender fluidity, it also seems to come into play regarding how Loki may go down. He is, after all, facing the realities of the multiverse. Many of our predictions have centered around the idea of seeing some Loki variants. This could pull them in from universes other than the Earth-616 that we all know and love. Establishing Loki as gender-fluid provides more explanation for what the future of the series may include. And hey, we’re all for more gender-fluid representation on television. Especially from such an anticipated show! Tom Hiddleston Agrees With The Importance of Inclusion

Nobody knows Loki better than the actor behind him. Tom Hiddleston, who has played the character for more than a decade and helped produce the ongoing series, commented on Loki’s clear gender-fluid identity. His take? That it’s nothing new. “Loki as a character has had such a broad-ranging and wide-ranging identity,” he explained in an interview, adding that he was pleased to express gender-fluidity on screen.

You can stream Loki on Disney+, with new episodes dropping every Wednesday.

Are you eager to see how the character of Loki expresses his gender-fluid identity?