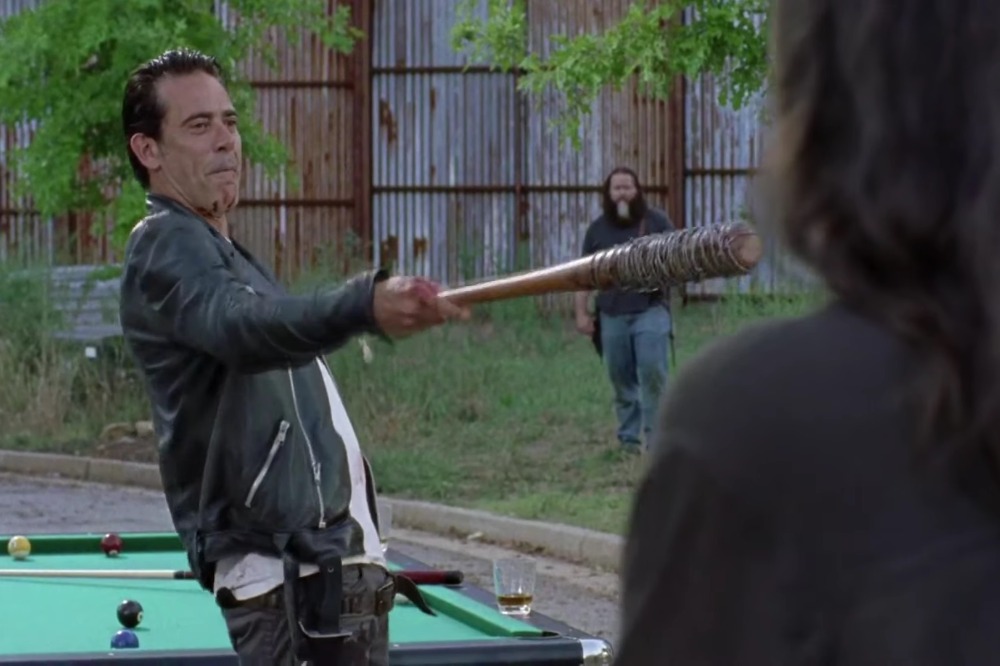 Of all the villains on The Walking Dead,  Jeffrey Dean Morgan’s Negan came out swinging like no others. His mindblowing entrance into the flagship series completely changed the vibe of the show. With previous villains, we couldn’t wait to see them leave and let the group get back to surviving. With Negan, it’s hard not to want more of him, even if he did murder some of your favorite characters and emotionally eviscerate everyone else. As production ends on The Walking Dead, Jeffrey Dean Morgan posted on Instagram that his last day on the mainline series has finally finished. Naturally, we’ve got thoughts about what the last day and episode for Negan on TWD must be like. 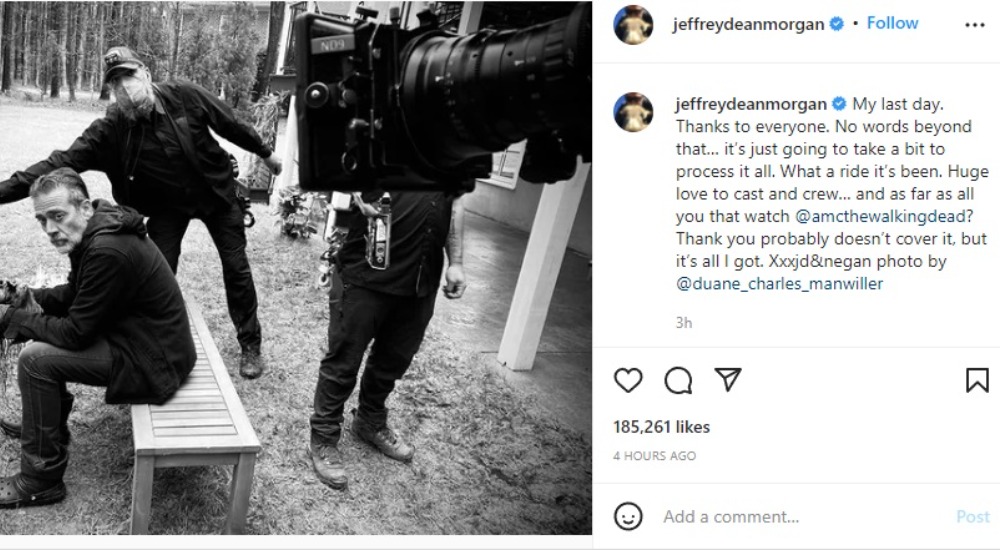 Before Negan’s Last Day on TWD

Negan’s arc has been one of the most satisfying and painful to watch. He started functionally as the cult leader to a huge group of wasteland mercenaries who “protected” communities whether they wanted it or not. Two things about him were immediately different from antagonists past. First, the show clearly wanted his sympathetic side to come out stronger in the end than his brutality. Punctuating the gunfire and homerun slaughters were moments of kindness and empathy. 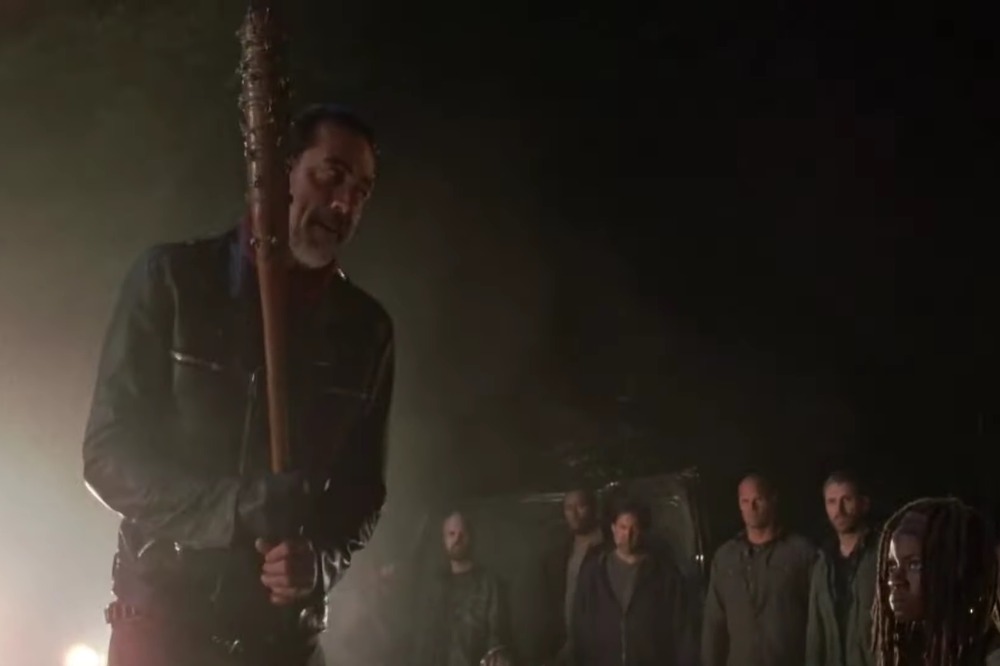 Negan might have beaten Glenn so severely that his eye popped out and his brain reverted back to season 4, but he also made Carl pasta. He may have killed Abraham right before the arc where a battle-trained character would have been most satisfying to see, but he killed murders rapists and would never use violence to coerce his literal harem of wives into submission.

The other major difference between Negan and other villains is his big, glowing set of plot armor, but it’s not unearned. Protecting a character from consequences that kill their peers isn’t just done because someone wanted to keep him around. Negan genuinely had potential to bring something more to the series, so things that should have killed him just made him angrier at Rick. For some fans, that made the All Out War arc seem synthetic, but all it really did was show the audience Negan was a character with an endpoint beyond the point villains usually die.

What’s in the Last TWD Episode With Negan?

AMC is getting some pushback because they announced a bunch of spin offs that can only really happen if most of the main characters survive. The plot of Isle of the Dead hinges on Maggie and Negan making it out alive, so we know at least that Lauren Cohen and Jeffrey Dean Morgan survive The Walking Dead. For a series that has taught its fans that the most final consequence is death, that’s a pretty major spoiler. What people are ignoring is the way Negan and Maggie get out alive and what happens to the people they love. Negan has a family now, and Maggie has Hershel. Fans are taking the obvious leap and predicting something is going to happen to Annie and Hershel to make Negan and Maggie go to New York, but what could actually happen to them. 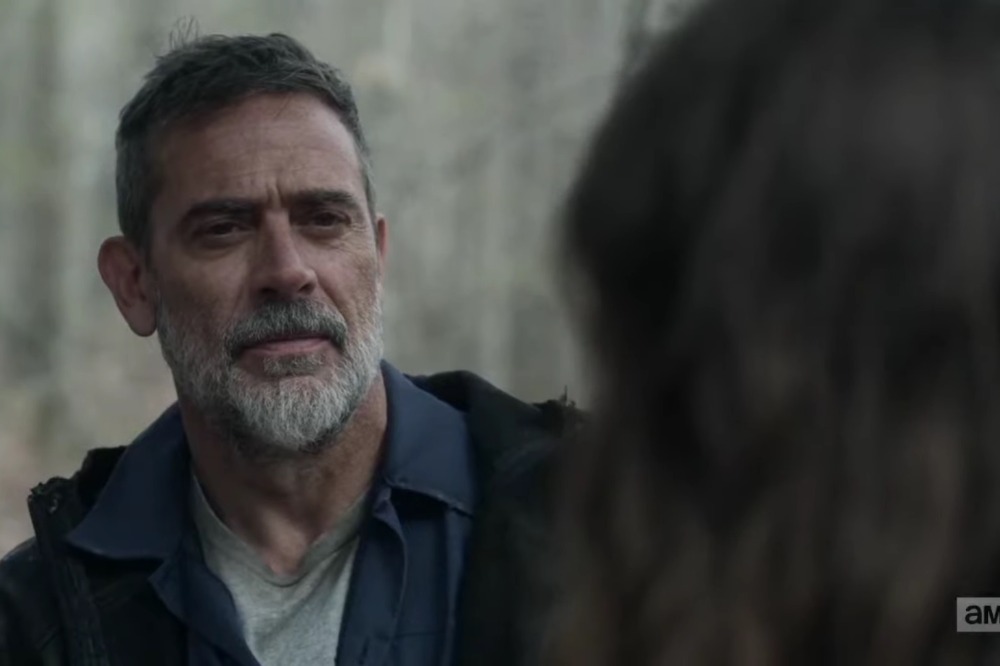 Just going to call it now, AMC is not brave or stupid enough to kill Hershel. They’ve killed kids before, a lot of them. But killing one of the last memories of Glenn would just be sabotage for a series that does need to have some kind of emotionally satisfying end one day. AMC has done a lot of work to show that families and legacies are the way to survive in The Walking Dead, so killing Hershel would be kind of like killing Judith in terms of sabotaging any real ending to the series. So maybe he gets kidnapped and Maggie and Negan go after him. If something happens to Annie, Negan would definitely be inclined to go on a buddy adventure with Maggie to murder whoever hurt their families. The most likely culprit for this is either the shadowy CRM or Lance and the Commonwealth.

Jeffrey Dean Morgan’s Negan isn’t safe from The Walking Dead’s love for ironic punishments. The governor’s perfect facade snaps and he killed the community he ruled over. The cannibals get hacked to bits. The wolves die and genuinely transform into feral, mindless beasts. Alpha gets her head on a pike and face worn as a mask. And Negan… gets nothing. Sure he had his throat slit and his charisma hole gets silenced for a while, but he doesn’t die. The series may be done with his punishment, but they may also have one last dig in mind. Maybe he’ll save Maggie’s family and lose his own in the process. 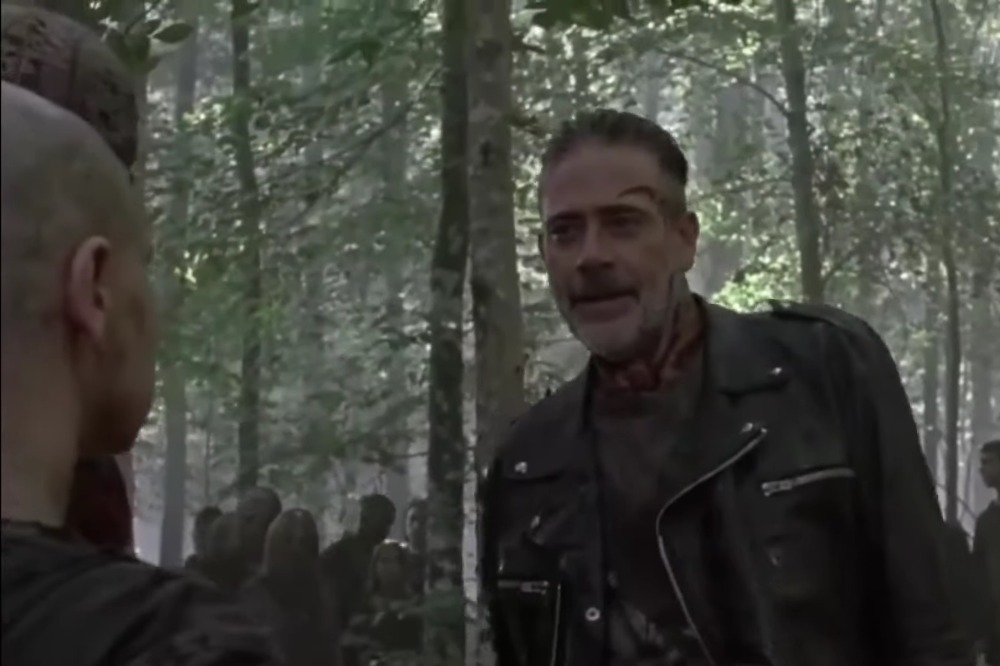 Our other theory involves a tank, or some other large thing someone could hide under. Imagine Negan and Maggie have saved or done whatever they need to do. The conflict feels pretty over. Then, a horde of walkers blocks off all exits from a busy road. The horses they rode in on are quickly overtaken. Maggie makes it to a ladder to get up to a roof, but Negan is blocked. All he can do is hide under a tank in the road, a callback to Rick’s entrance into Atlanta. Only as Negan climbs inside the tank, no radio crackles. There’s nobody to say “hey dumbass” because Negan killed him. Maggie watches until she sees a walker crawling across the tank bite Negan’s ankle and bring him down. Maybe his head gets eaten. Maybe the scene pauses and Angela Kang walks on to explain what the definition of irony is.

The Walking Dead final season is airing on AMC.

What do you think the last TWD Negan episode will be like? Give us your predictions in the comments!