The latest chapter of Hawkeye debuted Wednesday, and fans have come to expect big things from episode 4 of a Marvel Studios series. It was when we saw Monica Rambeau’s journey into Westview. It was when the ‘new Captain America‘ powered up and killed a kid. Loki was erased, and evil Doctor Strange destroyed his universe. Hawkeye did not break the episode 4 trend, because there are some major emotional moments and big reveals. Yet, ultimately, this shorter-than-usual outing is a quiet and mostly uneventful one. The moments we see on-screen are, as they should be, focused on the relationship between Jeremy Renner’s Clint Barton and Hailee Steinfeld’s Kate Bishop. (Also, keep your eyes peeled for a comics-accurate t-shirt in one scene!)

Of all the Marvel Studios and Disney+ joints, Hawkeye feels both like an outlier and a very ‘typical’ MCU story. Maybe it’s the Holiday setting, but I think it’s more about how relationship-focused the story is. Even The Falcon and the Winter Soldier let most of the Sam and Bucky friendship evolve via subtext. Yet, from the opening scene, this episode is mostly about how Clint feels about this kid who is living every comics-kid dream: going on an adventure with their favorite hero. Tony Dalton’s Jack Duquesne steals every scene he’s in. Finally, Alaqua Cox’s Echo continues to be a thorn in everyone’s side.

With two episodes left in this season, we’re getting to the show’s endgame. But, pretty much all of that emotion I mentioned earlier stemmed from Avengers: Endgame. We’re about to dive in, so if you’ve not yet seen Hawkeye episode 4, check it out and come back so we can break it all down.

A lot of Phase 4 so far has been either loosely tied to or a direct examination of grief. The specter of Natasha Romanov hangs over all of these episodes, but we got a number of strong and specific references to her. After a fun meeting between the two Hawkeyes, Jackie D, and Vera Farminga’s Eleanor Bishop, Kate doesn’t want to leave Clint all alone. So, she brings over a bunch of Christmas stuff and they have a little party. They set up a tree, watch a movie, and learn how to use coins heavier than a dime as hyper-accurate lethal weapon. The result is that despite Clint saying he and Kate aren’t friends, she’s perhaps the second-best friend we’ve seen him have in the MCU. (Playful banter from the first act of Age of Ultron notwithstanding.)

My favorite scene was the one in which she asked him about his “best shot,” and he said it was “the one I didn’t take.” Clint is still crushed by the loss of Nat, and he relives that moment when during a fight at the end of the episode, Kate Bishop gets sent over the edge of a building. Luckily, she wasn’t in danger, because the person who yeeted her off the building was none other than Florence Pugh’s Yelena Belova.

The (New) Black Widow Has Entered the Chat 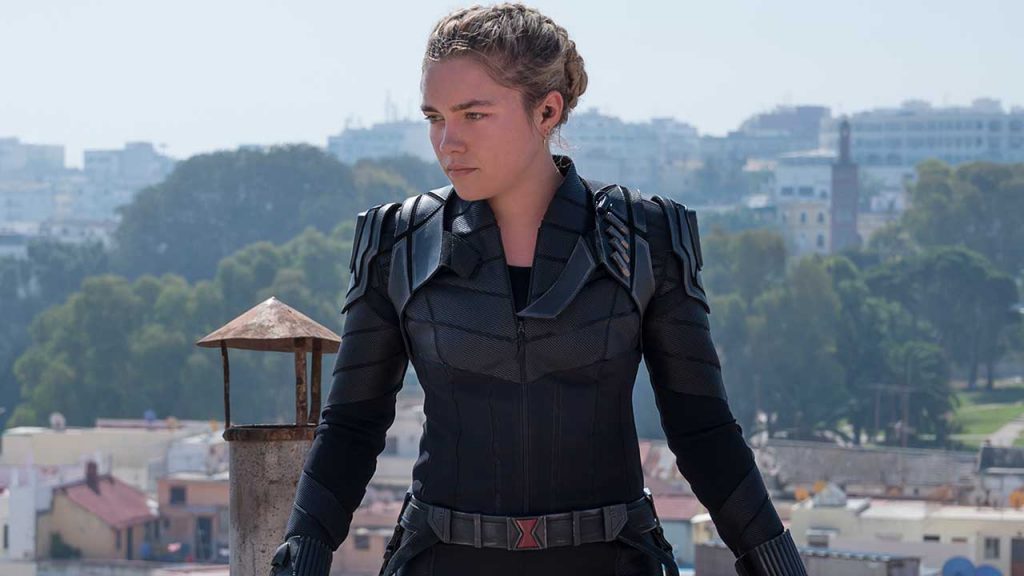 As soon as Clint realizes that Yelena is a “Black Widow assassin,” he tries to send Kate away. This whole series happened because Clint cares for Kate. First, it’s because she’s being branded for actions he took, and finally just because they became friends. Yet, Kate doesn’t listen, and she ends up saving Clint. Without a word, Yelena takes off leaving both of them alive. In the post-credits scene of Black Widow, we know that she’s been sent after Clint. Yet, I think we all expect Yelena to stay on the side of the angels (or hawks, in this case). Not only that, I suspect that the new Black Widow and the new Hawkeye will be fast friends.

It’s still unclear what Julia Louis-Dreyfus’ Contessa Valentina Allegra de Fontaine wants with these heroes she’s collecting. Still, she has both the Black Widow and Captain America (really, USAgent) under her thumb. Again, I suspect we’ll get some insight into that by the end of this season. I also suspect that we’ll get a resolution to the story around Echo, and a post-credits reveal of the mysterious “Uncle” figure. (And my money is on Vincent D’Onofrio’s Wilson Fisk.)

Nonetheless, I am still very happy that this remains a street-level threat. The world is not at risk, nor is the multiverse. All Clint Barton wants to do is prevent anyone else dying because of the curse of Ronin.

Where do you think the series is going? What’s been your favorite parts so far? Leave your reactions, thoughts, and theories in the comments below.