Final WandaVision Episodes Likely To Be Longer Than Normal 30 Minutes

From the first episodes of WandaVision, there has been very little to complain about. One thing that consistently frustrates fans (in the best possible way) is just how short each 22- to 30-minute episode feels. This runtime fits with the sitcom satire of the series, and the storytellers pack in a lot. However, for many fans it’s just not enough. Well, good news for fans of longer episodes, the final three installments of WandaVision should go well past the 22-minute mark. This means that as we get closer to the “endgame” of the series, we’ll be spending more time in both Wanda’s and the real MCU world.

The above image has been circulating on social media, and while I am unsure of its provenance, I can’t find any official statement from Kevin Feige stating this. However, he and members of the cast and crew of the show have suggested that the final episodes of WandaVision will be longer than we’re used to. During the press tour, both Paul Bettany and Elizbeth Olsen have described the series as a kind of “six-hour movie.”

Not counting the credits, the first four episodes of WandaVision time out to about 22 to 28 minutes. The fifth episode, called “On A Very Special Episode,” is the longest at about 34 minutes. The latest episode ran about 30 minutes exactly.  So, while the remaining WandaVision episodes might get longer, they would have to each run about an hour long to get to a total of six hours. During an interview with Steven Weintraub, Kevin Feige noted Marvel Studios’ approach to making TV.

“We’re looking at it as developing them as either six hour-episodes, or nine or 10 half-hour episodes. So, for instance, WandaVision started that way and Falcon and the Winter Soldier as 30 minutes, but because it’s streaming, it’s Disney+, and the rules have blurred over the years, yes. Some can be 23 minutes. Some can be much longer than that. But She-Hulk, for instance, is being developed as 10 30-minute episodes. Some will be longer and some will be shorter. Loki, Falcon and the Winter Soldier is being developed as six 40-50-minute episodes.” 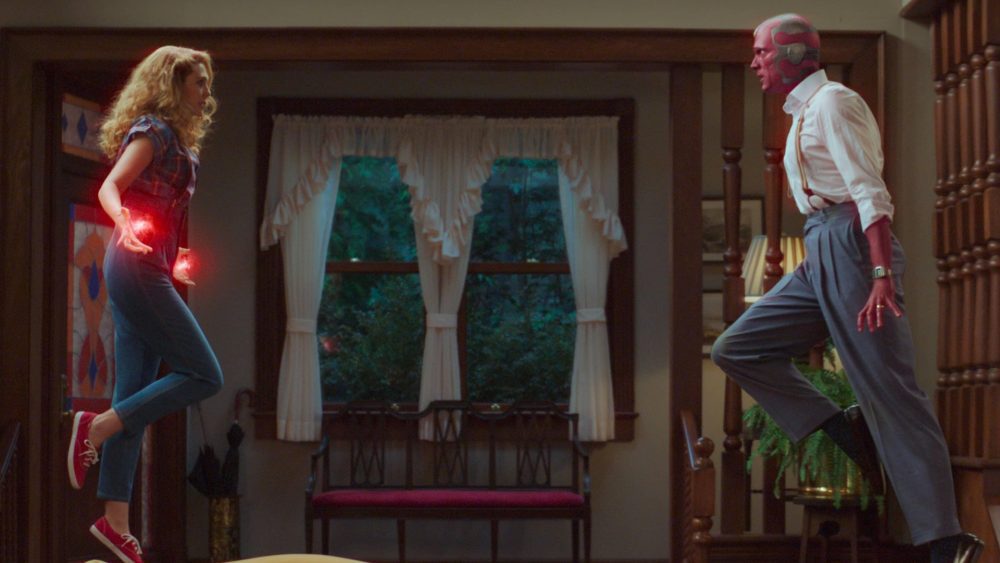 The key point here is “…WandaVision started that way…” (emphasis mine). We know that Marvel Studios announced that the original series order was “extended” from six to nine episodes. So, at some point during the development of the series, they added some story to it. So, it’s safe to be that Marvel Studios gave the storytellers appropriate space and time to do that well.

It’s a real mix of emotions we’re feeling, since it means that we’re getting more WandaVision, but these longer episodes mean the series is coming to an end.

What do you think? How do you feel about the length of the episodes? Let us know if you want more, less, or if they’re giving us just enough in the comments below.