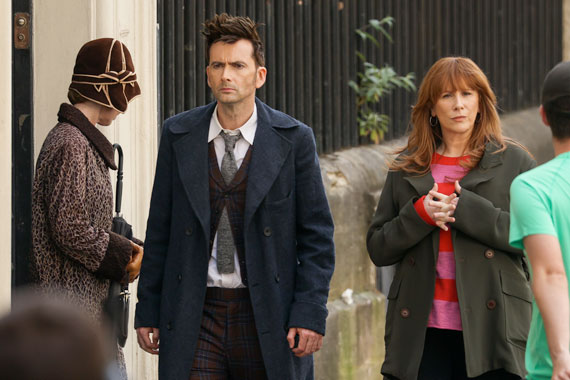 “That’s where this all started. At a certain time and day everyone would press play on a certain episode and some of the people who had been involved in those episodes were tweeting along.” Tennant said that he, Tate, and ex-showrunner Russell T. Davies did mention returning, but the conversation “all went quiet.” Even so, earlier this year, the BBC announced that Davies would return to the role. This is what Tennant had to say:

“Suddenly Russell let us know that he was taking over the show again and he would be back fully in charge and would we come and play a little bit for him? So I don’t know if we gave him the idea to take Doctor Who back but certainly we thought if he’s doing it, we can’t let these young people have all the fun.”

Later in this Doctor Who David Tennant interview, the star spoke about the new Doctor, Ncuti Gatwa. Tennant shared his thoughts on the actor. He said he was “a little bit jealous” of Gatwa because he was “starting on this exciting journey.” Tennant then went on to say:

“Ncuti is brilliant. He’s a lovely, lovely man and he’s full of beans and he’s really talented. I mean he’s like scary-talented. So I’m thrilled for every Doctor Who fan for what’s to come and I include myself in that number.”

Currently, it’s unclear in what capacity Tennant and Tate are returning to the role. During this Doctor Who David Tennant interview, the actor talked about returning to the show. However, Tennant was adamant that he was not playing the next incarnation of the Time Lord. In a separate interview, he gave this intriguing statement:

“Ncuti Gatwa will be the next Doctor Who and that’s about as much as I am prepared to say.”

Clearly, we shouldn’t expect to hear many spoilers in any future Doctor Who David Tennant interviews!

The Power of the Doctor Release Date When Gatwa takes over the role of the Time Lord, he will be the fourteenth individual to do so. Additionally, Gatwa will be the first black actor to play the Doctor in a full-time role. Previously, Jo Martin made brief appearances as the Fugitive Doctor. She will return to this role for the Big Finish spin-off audio.

Additionally, aside from what’s mentioned in this Doctor Who David Tennant interview, we know very little about the 60th-anniversary special. Neil Patrick Harris will play an unknown “greatest enemy” of the Doctor, while Yasmin Finney will play Rose. There will also be some returning faces, like Jacqueline King as Donna’s mother, Sylvia, and the late Bernard Cribbins as Donna’s grandfather, Wilf. Unfortunately, there’s no confirmed air date for the special yet. You can catch the Thirteenth Doctor’s swan song in The Power of the Doctor. This special will air later in October.