In 2019, the DC movies may not be making an appearance, but a number of DC Universe Comic-Con panels will highlight the DC-only streaming service’s future. Fans can expect first looks at the original series that are getting their sophomore seasons among the DC Universe Comic-Con panels, but also first looks at some anticipated offerings. With the streaming landscape getting crowded, DC Universe must showcase its unique offerings that make it worth the $8-per-month price tag. SDCC attendees at the annual convention early enough can spend “preview day,” Wednesday July 17, checking out new shows and a documentary about the making of the Shazam movie. Also, since it’s Batman’s 80th anniversary, the Dark Knight will be inducted into the Comic-Con Hall of Fame. (Though one has to wonder who is in this Hall of Fame if not one of the four most popular superhero characters in the world?)

DC Universe and Their Uncertain Future

The DC Universe/Warner Bros. TV Comic-Con 2019 panels are important for reasons beyond simply building fan hype. Disney+ drops later this year, followed (presumably) by DC’s parent company Warner Media’s own streaming app. Disney+ will feature almost all of the MCU, save for the series created in partnership with Netflix. DC Universe offers a relatively deep back catalog of series and movies, currently featuring Zack Snyder’s Watchmen, Batman: The Animated Series, and weird little forgotten shows like WB’s Birds of Prey. Yet, it’s the investment in new, original series that will bring in subscribers and keep them. However, thanks to the surprise announcement of Swamp Thing being cancelled,  people wonder if DC Universe has much of a future at all.

Just because Warner Bros. will launch its own streaming app, that doesn’t mean that DC Universe is doomed. In fact, DC Universe might be an add-on or some other doorway for comics’ fans into the service. The WB streaming app can compete with Disney+’s low per-month cost but bundling it with DC Universe could be a way to sneak more revenue onto the balance sheet. Of course, Warner Bros. could shutter the service in favor of its larger app. It often seems like DC and WB don’t know what the others are doing when it comes to decisions like these. While no one can really predict what Warner Bros. will do, the DC Universe Comic-Con panels will serve to counter the shutdown fears.

Before we dive into the specific DC Universe shows hosting Comic-Con panels, we can’t ignore the perks they are offering their members. DCU members will get first crack at VIP tickets to both the Shazam documentary and Hall of Fame ceremony. They can sign-up for an exclusive yacht party which will feature appearances from talent and giveaways. Jim Lee, artist extraordinaire, will host a special signing session only for DCU members. On the convention floor, members can pick up exclusive prints and gift sets at the DC Universe booth. There will also be interactive tours at the booth focused on Batman and the new project featuring Harley Quinn. These are the goodies for the members, but the DC Universe shows hosting panels at Comic-Con this year are for people not yet convinced the service is worth it. They kick off on Saturday from 7:00 pm until 9:00 pm.

The first original series from DC Universe, Titans will be back for a second season later this year. This live-action series features Dick Grayson, Starfire, Raven, Beast Boy, and Jason Todd’s Robin. The first season really served as an extended pilot for the series, because it doesn’t tell a complete story. Rather, this slow burn series took its time bringing the future Titans together and focusing on the relationships between the characters. The first season ended with a cliffhanger, but not one that suggests any major ramifications for the next season. However, a “post-credits” tease suggested that the modern version of Superboy will join the series, along with the first-ever live-action deaf superhero, Jerhico. Also, Krypto the super-dog will probably show up as well. Hopefully, the series will figure out what sort of show it wants to be in this second season.

First introduced in a mid-season episode in Titans, the eventual Doom Patrol series became a surprise hit for the service. Featuring a strange array of superheroic misfits, including Robotman voiced by none other than Brendan Fraser, this series shattered everyone’s expectations. At times absurd and metafictional, the search for “The Chief,” played by Timothy Dalton, took the Doom Patrol crew on a journey that wasn’t just emotional but destroyed all of their worlds. Fans will be interested to see how the characters grow in a second season and if the storytellers can capture lightning in a bottle for a second time. Unlike Titans, the first season of Doom Patrol told a complete story, which means they can go literally anywhere (including into a painting!) for their next outing.

Technically, this is not a new series but a third season to the cult-classic animated series on Cartoon Network, Young Justice. Cancelled due to meager viewership and low toy sales (Mattel provided funding for the show), Warner Bros. renewed it as an exclusive for the DC Universe service. The third season is broken into two arcs, and the first is already on the service. So, their portion of the SDCC show will be to highlight the upcoming second half of the season. Of course, what fans also will want to know is if a fourth season of the beloved series is in the works. Animation is cheaper to invest in than live-action series, so of all the shows on the service, Young Justice seems to be the one with the best chance of living on. 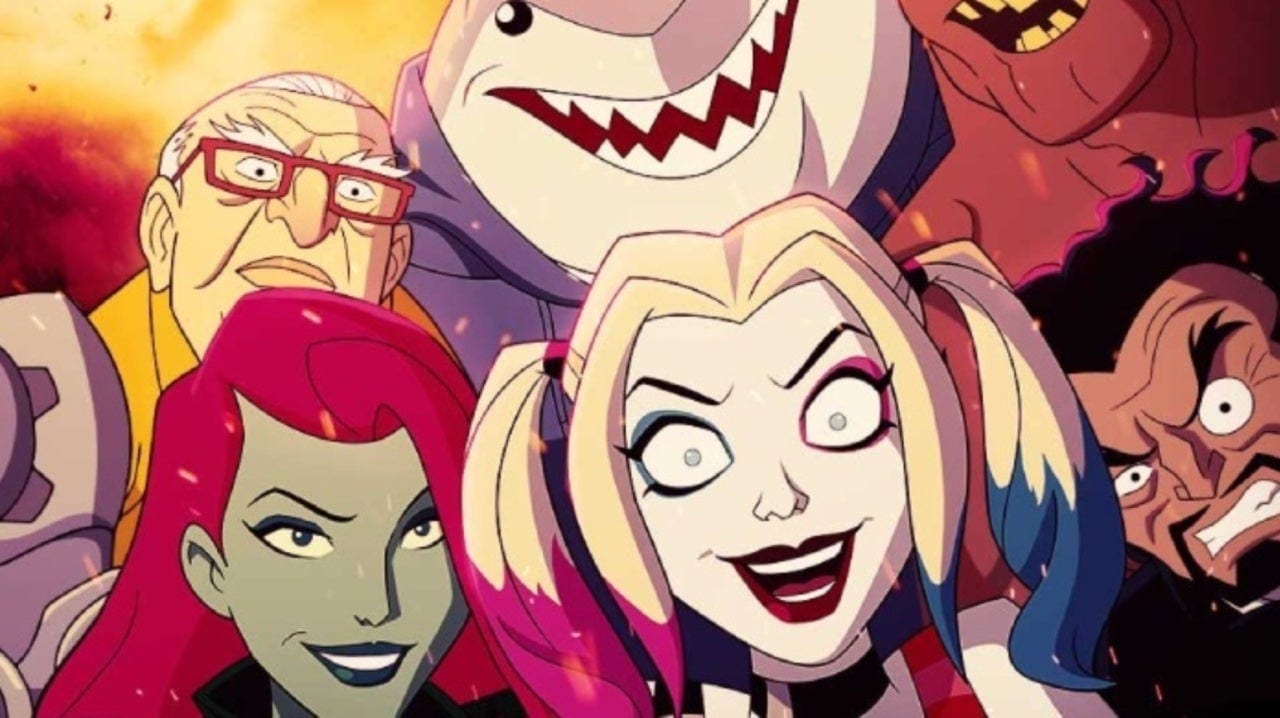 Always have your friends with you. (Image: Harley Quinn, WB Animation)

Finally, DC Universe will introduce their new Harley Quinn project, an animated comedy series aimed at adult viewers. Simply titled “Harley Quinn,” the series splits her from the Joker and follows her quest to become a supervillain in her own right. The series is interesting, because it will not feature the voices of either Margot Robbie, who plays the character in the live-action films, or Tara Strong, the voice actor who originated the role. Instead, Kaley Cuoco of Big Bang Theory fame will voice the titular character. Lake Bell will voice Poison Ivy, a character rumored to be Harley’s love interest in the series. Diedrich Bader will voice Batman, as he did for Batman: The Brave and the Bold. The Joker will feature the voice of Doom Patrol alum Alan Tudyk, as well as a number of other well-known voice actors.

The DC Universe Comic-Con Panels Are Definitely Worth Watching

Whether you are a huge fan of these DC Characters or simply curious about the future of direct-to-consumer media, these panels are not to be missed. It will be interesting to see how much they are willing to reveal about their future slate of offerings, as well as the fan response. These can give us clues to where DC Universe will land once the battle lines in the streaming wars are fully drawn.