Any fans of Disney franchises are sure to be happy today! The company recently released footage teasing their upcoming shows for 2023. We got footage of the next season of Loki and previews of the new Peter Pan & Wendy series. Of course, Disney didn’t leave out one of its biggest franchises – Star Wars! In the video, we saw previews of The Mandalorian season 3. But that wasn’t the only tease of a galaxy far, far away. It was such a quick moment that you might have missed it! We got an Ahsoka series preview, showing the character very briefly.

Sadly, Disney didn’t give us much more information about the series apart from this preview. We still don’t even have a concrete release date! However, from this trailer, we at least know that it’s coming in 2023. Additionally, this is the first time we got some official footage of the TV show. Of course, we’ve already seen Rosario Dawson in the role of Ahsoka. After all, she was a big part of The Mandalorian season two finale! However, this is the first Ahsoka series preview where we saw the character in her show. Ideally, we would’ve liked longer footage – but you can’t have everything. You can check out the image below.

However, this isn’t the only footage that’s floating around. In May, Disney gave some lucky fans a special look at early scenes from the show. This was part of the Star Wars Celebration festivities and showed the first three weeks of the cast filming the show. Unfortunately, they didn’t give this footage a wider release. But from what fans have said, it seems like it was pretty exciting stuff! Perhaps Disney will share this Ahsoka series preview shortly. 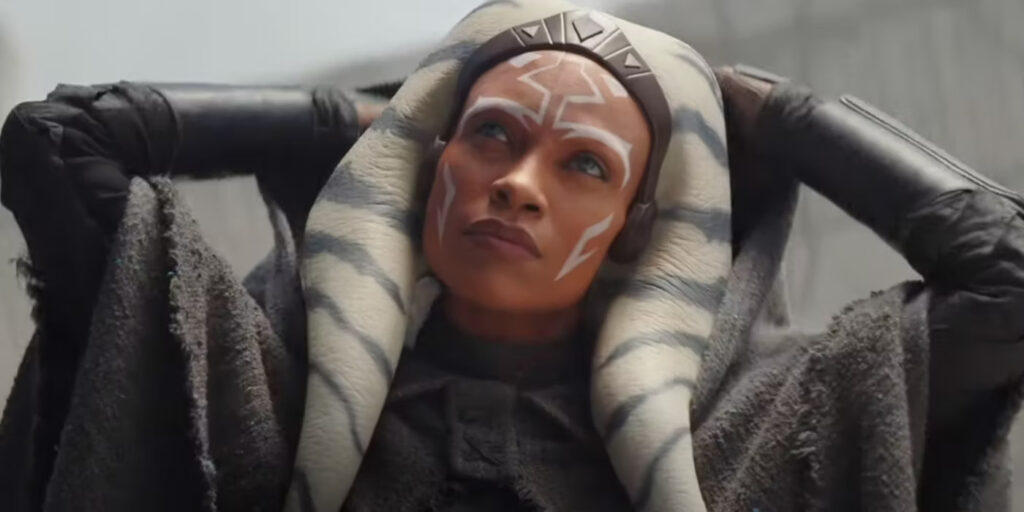 In addition, Rosario Dawson also appeared at the Celebration event in costume and gave a video message to the audience members. She said, “I’m pretty excited to be filming Ahsoka here for all of you, to be released next year. So maybe next time.”

Although the Ahsoka series preview may be brief, we know some other things about the upcoming series. Namely, we know it’ll take place after Return of the Jedi but likely before The Force Awakens. This is the same period in the Star Wars universe as The Mandalorian. So, we may see some other characters appear in this spin-off. However, Disney keeps details about the plot pretty secret.

From Ahsoka’s appearance in The Mandalorian, we know that part of the show will be about Ahsoka’s search for Thrawn. Previously, this blue-skinned villain appeared in the Rebels TV series, where we saw Ahsoka hunting him down. Thrawn was a big part of the Legends canon, so it’s exciting to see him crossover into the Disney canon.

Additionally, we also know some details about the cast. Aside from Rosario Dawson playing the titular character, Natasha Liu Bordizzo will play Sabine Wren. In the show, Sabine is a Mandalorian fighter who dropped out of the Imperial Academy. She also worked as a bounty hunter for several years before leaving this role. One returning actor is Hayden Christensen, who will reprise his role as Anakin Skywalker. Previously, he appeared in the Obi-Wan Kenobi spin-off show and reunited with Ewan McGregor, who played Obi-Wan. There’s also Eman Esfandi, who will play Ezra Bridger, who appeared in Rebels. In his show, Kanan Jarrus began training him as a Jedi. If only we could get an Ahsoka series preview of all these characters!

Alongside these characters, there are several actors in unknown roles. For example, Mary Elizabeth Winstead and Ivanna Sakhno will appear, but we’re not sure who they’ll play. We know Ray Stevenson will be a “villainous admiral.” Naturally, this character’s name is unclear, although we speculate that it might be Grand Admiral Thrawn. Additionally, Chopper and Hera Syndulla will appear in the show, but we don’t know which actors are playing them.

Although the Ahsoka series preview footage is limited, Disney has given us plenty of Star Wars content in the past year. Not only did we get the Kenobi spin-off, but they also released Tales of the Jedi, which gave us a further glimpse at Ahsoka’s history and backstory. There’s also the amazing Andor series and future Star Wars content previews. It’s a pretty exciting time to be a fan of a galaxy far away!

You can catch the first season of Ahsoka in 2023.