The world loves to pit people or things against each other: dogs versus cats, DC versus Marvel, Team Edward versus Team Jacob. I’ve never been surprised at the popularity of reality shows because who doesn’t enjoy a big, catty shouting match, amiright? So today, I’m going to look at some bad blood between two of the biggest action stars of the 21st century: Vin Diesel vs The Rock aka Dwayne Johnson, and what is the deal with the hate between Vin and Dwayne?

Where Did the Hatred Between Vin Diesel and The Rock Begin? 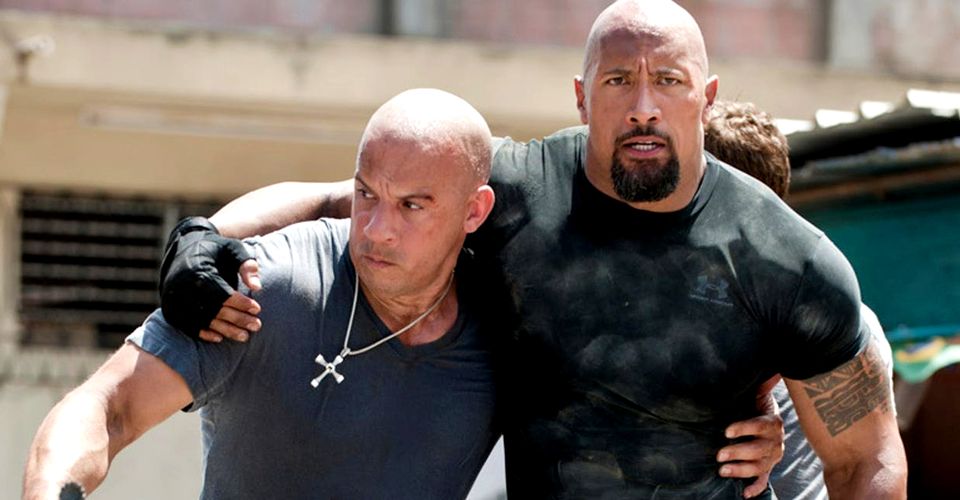 How did this feud between Diesel and Johnson begin? When did pop culture start pitting Vin Diesel vs The Rock as a thing? Were they best friends and one unknowingly said something that hurt the other’s feelings a la Paris Hilton and Nicole Ritchie (“Vin knows what he did, and that’s all I’m ever going to say about it”). Or was it just hate at first sight? To get to the bottom of this, we have to go back to 2011 when Johnson first appeared in the Fast and the Furious franchise’s fifth movie, appropriately named Fast Five. He played Luke Hobbs, an agent pursuing the Fast and Furious crew for their various crimes against the law in general. Things seemed great: Johnson returned for the sixth and seventh movies (Fast & Furious 6 and Furious 7), and there were publicity images of him with cast members of the franchise. However, things blew up in 2016, when Johnson posted in a now-deleted Instagram post that there were some “candy asses” on the Fast and Furious sets. Thanks to screenshots though, his words continue to live on. Check out the post via Twitter below:

UMMMMMMMMMMMM. So apparently The Rock hates someone on the FF8 set. *pulls up chair, gets out popcorn bowl* pic.twitter.com/Z6Dkc2VUfK

Sh*t is going down! Many fans scrambled to try and figure out who the candy ass (or asses) were and some pointed to Diesel, but without solid evidence. After the eighth film (The Fate of the Furious) wrapped, Johnson went back to Instagram to share another post, this time thanking some of his castmates by name, but purposefully leaving out any mention of Diesel. This didn’t look good and Diesel actually seemed to confirm that there was beef between him and Johnson. He went on his own Instagram and said in a video, “Honestly, give me a second and I will tell you everything,” he said. “Everything.”

From there, both Diesel and The Rock went back and forth, talking about their relationship in terms of “brotherhood” and having arguments with your family, but still loving them. Some of the quotes seem to beg the question, what hate between Vin and Dwayne? Interestingly, both Johnson and Diesel have gone on to say things that seem to me…a bit passive aggressive? They haven’t said they hate each other outright, but there’s definitely some snark to some of their quotes. In an interview with Vanity Fair via IndieWire on the infamous deleted Instagram post, Johnson said:

“It caused a firestorm. Yet interestingly enough…(it was) as if every single crew member found their way to me and either quietly thanked me or sent me a note. But, yeah, it wasn’t my best day, sharing that. I shouldn’t have shared that. Because at the end of the day, that goes against my DNA. I don’t share things like that. And I take care of that kind of bulls–t away from the public. They don’t need to know that. That’s why I say it wasn’t my best day.”

On a similar note, Diesel told USA Today that they were really close and that the public has blown their “fight” out of proportion. He said:

“I protect the franchise. I protect everybody including Dwayne. I protected Dwayne more than he’ll ever know. And it doesn’t matter. He doesn’t have to know. But he appreciates it. He knows it. Dwayne has only got one Vin in his life. Dwayne Johnson only has one big brother in this film world and that’s me.”

After the success of Hobbs & Shaw, Johnson shared in an Instagram video that he was grateful to the cast and crew and this time, he thanks Diesel, saying “Lastly, but not least, want to thank brother Vin for your support of Hobbs & Shaw. I’ll be seeing you soon, Toretto.” Most recently though, Vin Diesel vs The Rock’s relationship is being brought into the spotlight again when Johnson addressed an Instagram post that Diesel has posted in November asking him to rejoin the Fast and the Furious franchise. In an interview with CNN, Johnson called Diesel’s post “manipulation” and said:

“I was very surprised by Vin’s recent post. This past June, when Vin and I actually connected not over social media, I told him directly — and privately — that I would not be returning to the franchise. I was firm yet cordial with my words and said that I would always be supportive of the cast and always root for the franchise to be successful, but that there was no chance I would return. I privately spoke with my partners at Universal as well, all of whom were very supportive as they understand the problem. I didn’t like that he brought up his children in the post, as well as Paul Walker’s death. Leave them out of it,” Johnson continued. “We had spoken months ago about this and came to a clear understanding. My goal all along was to end my amazing journey with this incredible Fast & Furious franchise with gratitude and grace. It’s unfortunate that this public dialogue has muddied the waters. Regardless, I’m confident in the Fast universe and its ability to consistently deliver for the audience, and I truly wish my former costars and crew members the best of luck and success in the next chapter.”

Oof, that did not sound good. Diesel’s Instagram post had said, “My little brother Dwayne… the time has come. The world awaits the finale of Fast 10. As you know, my children refer to you as Uncle Dwayne in my house. There is not a holiday that goes by that they and you don’t send well wishes… but the time has come.” If I’m being honest, I can see why there’s hate between Vin and Dwayne, especially after a post like this and Johnson stating he didn’t want to come back.

Can Vin Diesel And Dwayne Johnson’s Relationship Ever Be Repaired? 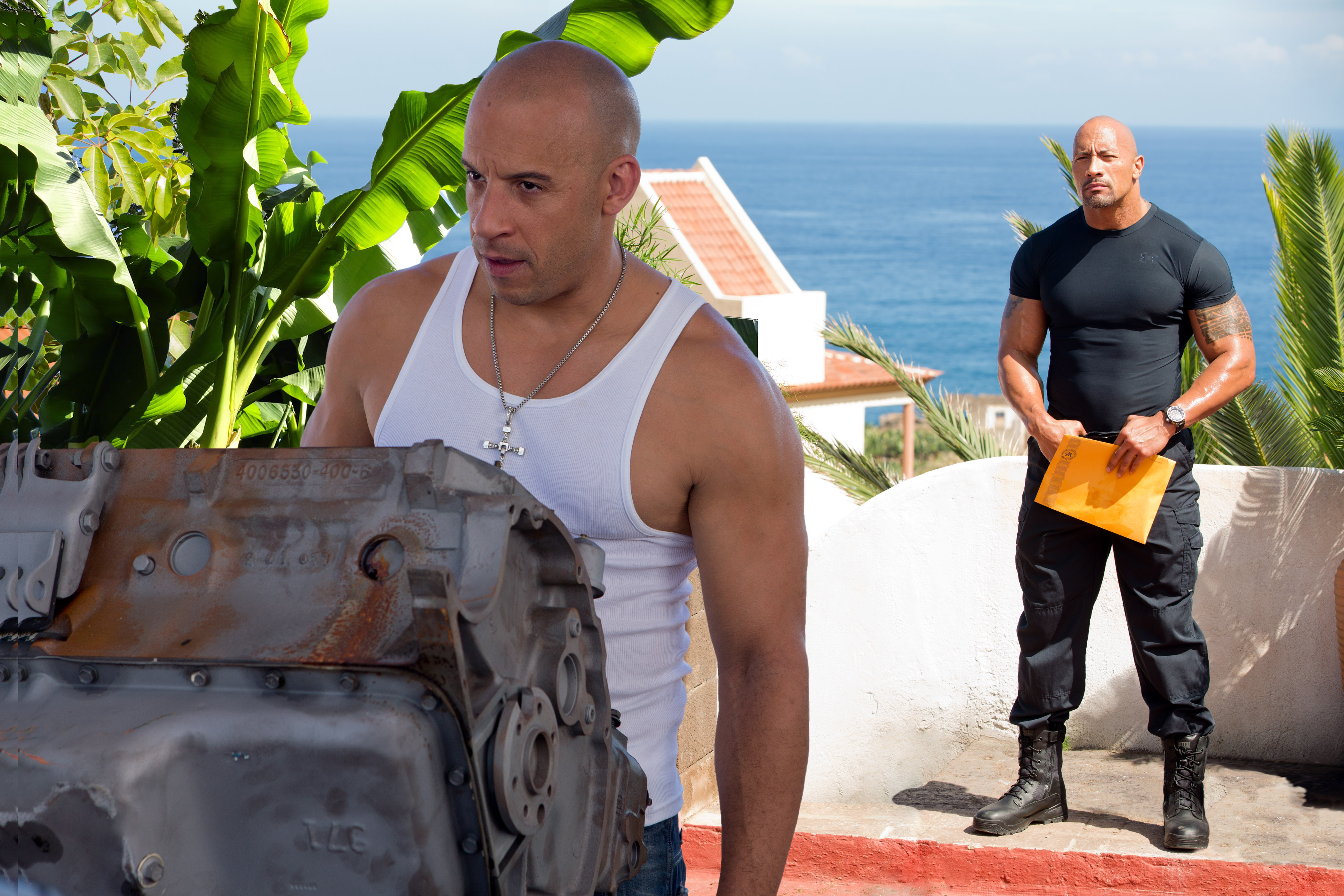 To put it bluntly, probably not. Both action stars have been super busy (Diesel was in Bloodshot and will star in a Rock Em Sock Em movie, and Johnson has Black Adam and was recently in Jungle Cruise). Also, they just seem to have clashing personalities and ways of doing things, which happens. Johnson told Vanity Fair that he and Diesel are “philosophically two different people” who “approach the business of moviemaking in two different ways.”

Is it possible that the idea of Vin Diesel vs The Rock is all one big publicity stunt? After all, they both have content coming out. In a November 2016 interview with the Los Angeles Times, Johnson had implied that the feud was at least partly free publicity for The Fate of the Furious. “I’ve been in the game a long time,” he said at the time. “Would Universal have preferred that didn’t happen? Sure, we talked about it. The irony is after that and as they do their tracking and all their analysis, the interest shot through the roof to a whole other level.” However, I don’t think this is for publicity anymore. Johnson sounds adament about not wanting to rejoin the Fast and Furious franchise anymore, and I think that should be respected.

What do you think of the hate between Vin and Dwayne? Is it all just one big publicity stunt? Do you think they’ll ever be friends? Let us know in the comments below!