Home » Pop Culture » David Duchovny Played A Trans Character In Twin Peaks But Was It ‘Good’ Or ‘Bad’ Representation?

David Duchovny Played A Trans Character In Twin Peaks But Was It ‘Good’ Or ‘Bad’ Representation? 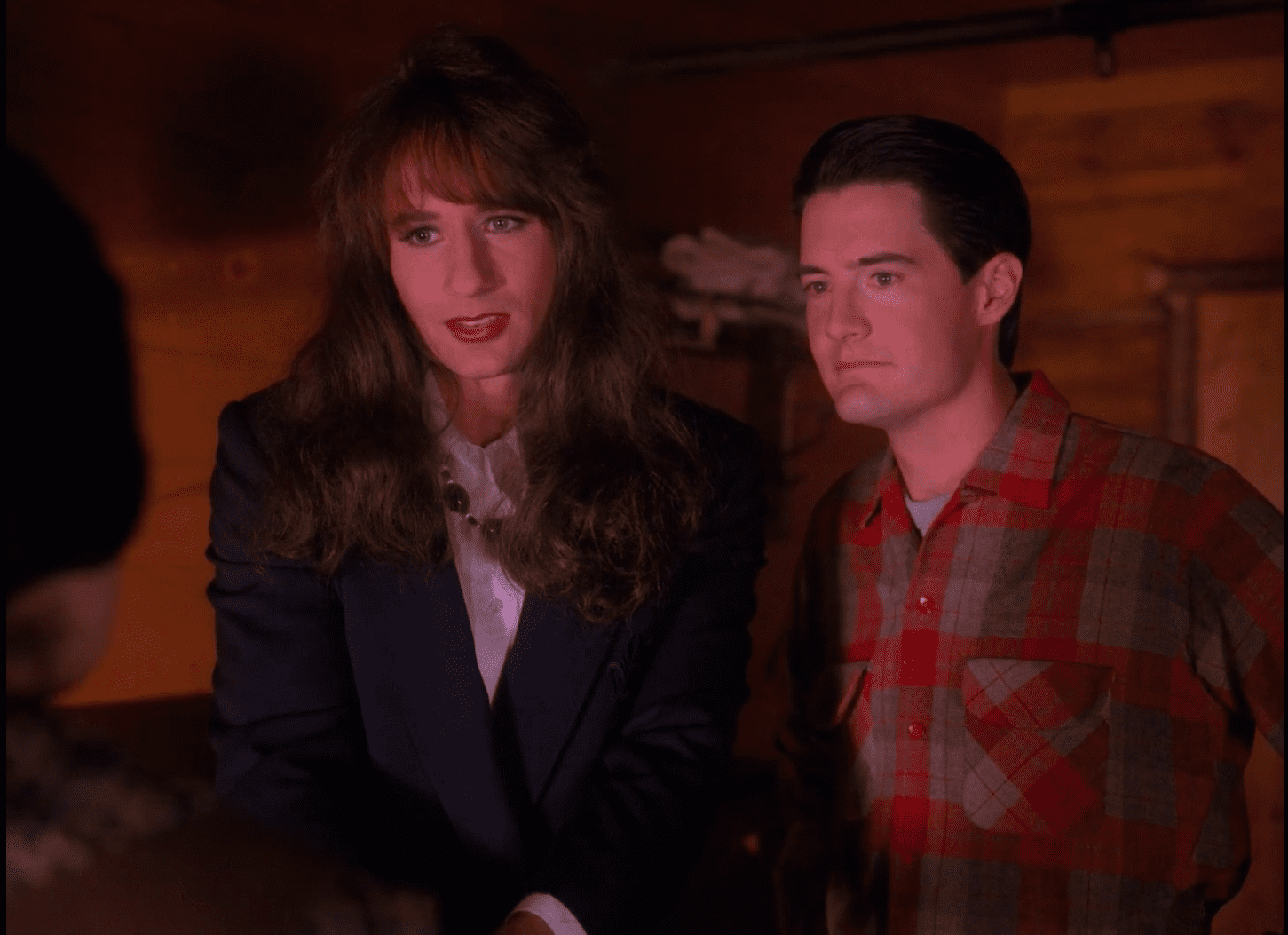 30 years ago, David Lynch and Mark Frost gave us all a gift, a confusing, weirdly entrancing, gift. Twin Peaks ran for two seasons originally, the first being a masterwork of Lynchian weirdness, and the second being a pretty good follow-up and conclusion to the story. Then there was a prequel movie and a third season 25 years later. In that time, one thing Twin Peaks became known and loved for, other than its incredible advertising for cherry pie, is the cast of characters. Icons like Albert Rosenfield (the stone cold forensics specialist with a heart of gold), the giant (a friendly spirit that gives cryptic advice), and Log Lady (a lady with a log). And then there was the trans character David Duchovny played in Twin Peaks season 2. 30 years later as another Pride month ends, she merits some more attention.

Two years before he played the FBI’s most unwanted, David Duchovny played Denise Bryson, a DEA agent tasked with investigating drug allegations against dear coffee-loving Dale Cooper. When first we meet Denise, she’s immediately revealed to be trans. To explain the contrast between her appearance and the name Cooper knows her by, Denise offers up one of the better coming out lines of the 90s: “It’s a long story, but I prefer Denise if you don’t mind.” In the episodes following that introduction, we get trans representation that is complicated, to say the least. 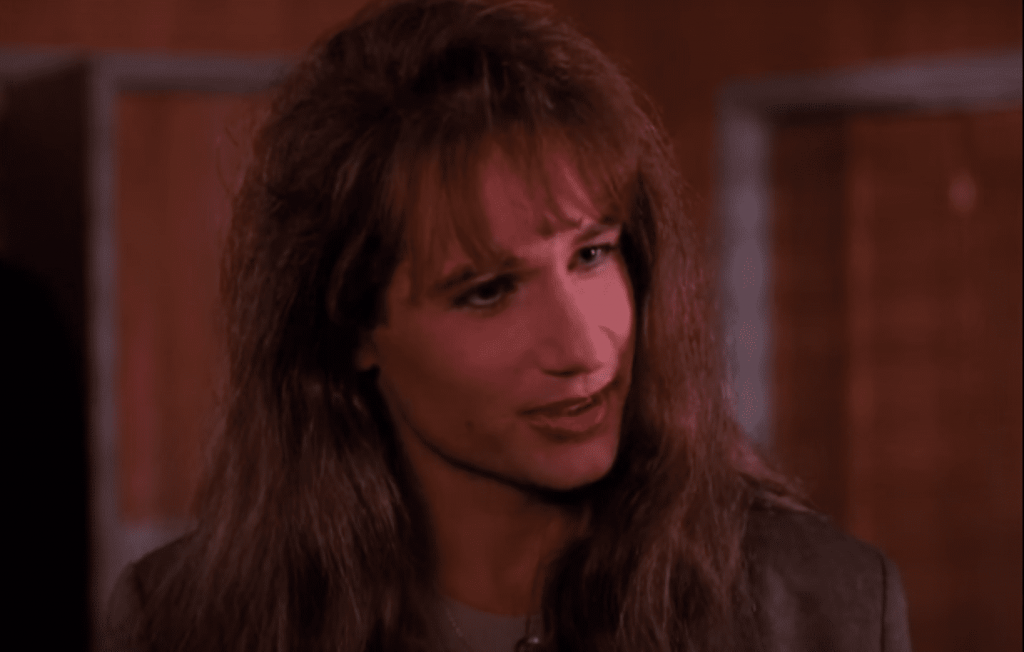 Denise appeared in 3 episodes of season 2 of Twin Peaks and 1 in Twin Peaks: The Revival. Those 4 episodes depict a representational rollercoaster so wild that it could be a minecart level in Donkey Kong Country. When first we meet Denise, it is following her introduction by her former name. As soon as she leaves the room, we get the line “that’s a good color for him.” In every interaction Denise and Cooper have, he is exactly as friendly as he is with every other character, and the interest he takes in Denise’s story is innocent and accepting. Cooper treats Denise with the same earnest acceptance and curiosity that he treats every other character and every cup of coffee.

The rollercoaster continues going upward when Audrey meets Denise and, shocked, says “They have women agents?” and, because this is the 90s,  Denise responds “More or less.” The last two highlights of Denise’s season 2 appearances are the most interesting. In preparation for a potentially violent confrontation, Denise dresses as a man because it “felt more appropriate.” In the same episode, she appears dressed as a waitress and smuggles a gun into a hostage situation using the power of garter-based distraction and David Duchovny’s sultry thighs.

What Kind of Representation Is This?

Denise is not a particularly deep character. For guest characters like Denise who only appear for a few episodes, they tend to have one major characteristic that develops or changes as their arc progresses. Rosenfield goes from a stone-cold workaholic to an understanding and empathetic workaholic. Gordon Cole is mostly deaf, but later he can perfectly hear one woman’s voice and bonds with her immediately. Denise Bryson is trans and people kind of get used to that.

Where other characters have internal development, Denise’s is external. She starts and ends at the same point: having transitioned and become more happy with herself. The signifiers of development for her personal story are uniquely beyond her control because for a long time, if a character is trans, the story around them is either people dealing with it or making jokes about it. Usually both. However, the reactions of the characters around her don’t necessarily mean the representation is negative, just accurate in ways they may not have intended when we look at it from a modern context. Jokes that were played for laughs become indications of in-character discomfort, ignorance, or prejudice. Cooper, who accepts without a second thought everything from spectral giants to ethereal serial killers, accepts Denise just as readily. Where it may have been intended to show that Cooper accepts all weird folk, now it may as well be Dale Cooper stopping the scene, looking into the camera, and saying “Trans rights” while sipping a cup of damn fine cup of coffee. 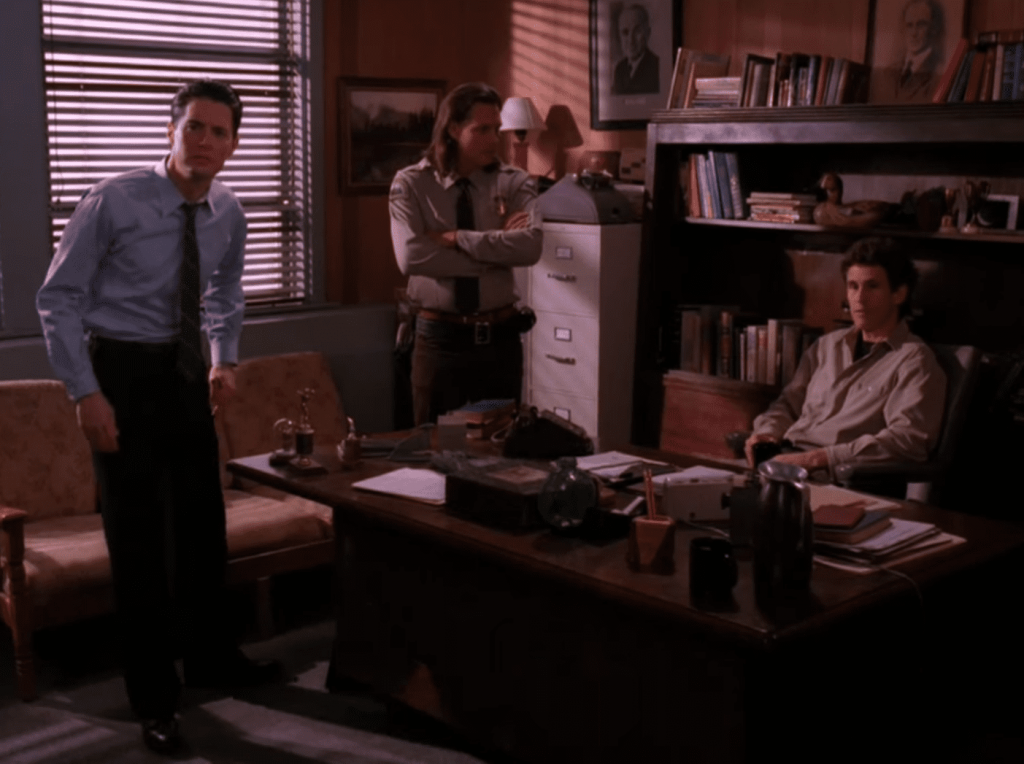 David Duchovny plays a trans woman, and as much as we love spooky Mulder, he’s a cis guy. Many people have justifiably noted it as a red flag for the character as a whole. One could even call it a Scarlett flag, but there isn’t a Scarlett Johanswer for everything, especially in this case because the character was cast 30 years ago. Somehow, it’s still infrequent that a trans actor gets to play a trans character. When Denise Bryson returned to Twin Peaks in 2017, she was still David Duchovny, and David Duchovny was still, stubbornly, not trans. The showrunners were faced with recasting the character or just rolling with it. Considering an entire X-Files had come out in the time since, the choice probably wasn’t the hardest they had to make.

When we re-watch Twin Peaks and get to the episodes with Denise, what we can see is an imperfect representation that accidentally got better and worse as the years went by. Denise is a complicated character, not because the character herself is complicated, but because the execution of her character sends a lot of different messages. In the show,  people react how they actually react: with quips, confusion, curiosity, support, and a bit too much interest. It’s hard to even answer if Denise is an accurate portrayal of a trans person, but she does share one characteristic with virtually every single famous trans person. Her deadname is one of the first things in her wiki entry.

How do you feel about trans and Queer representation in media then and now? Tell us about it over a slice of the best cherry pie you’ve ever had.