DC Events of the Decade: Ten Stories that Shaped their Universe. 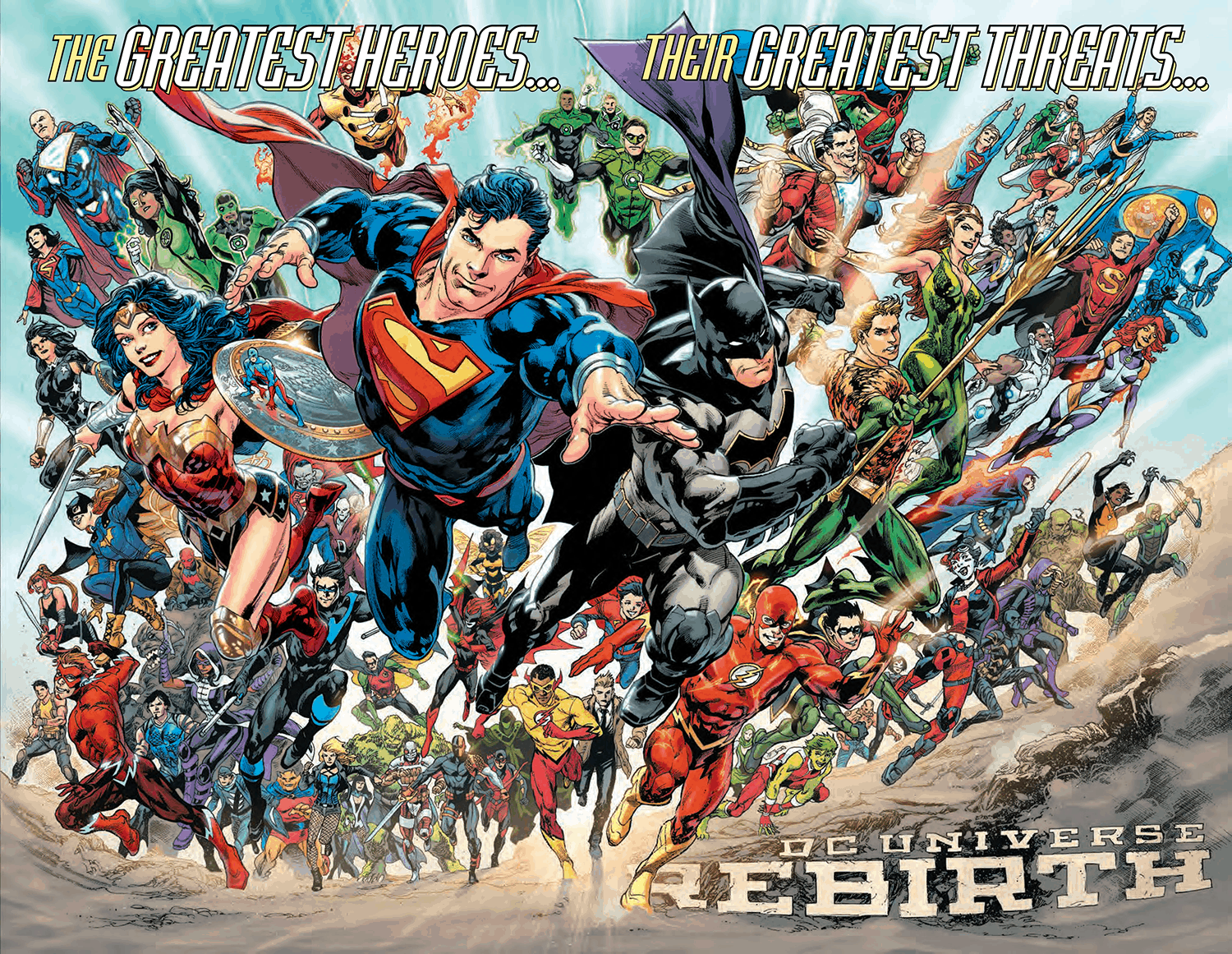 For DC and Marvel Comics, there are multiple crossover events each year, and dozens over the course of a decade. Between the two franchises, there were over 100 events in a ten year period. Some were very small, consisting of just two titles. Others were massive line-wide events. There were a few reboots along the way too (4 line-wide reboots altogether). So, in the mess of events, which ones stand out the most for the big two publishers?

Let’s start with DC Comics, Marvel’s “distinguished competition.” They did, after all, start the event craze with Crisis on Infinite Earths.

DC Events of the Decade, 2010: Return of Bruce Wayne 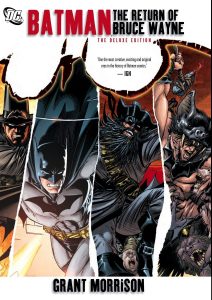 Yes, Batman was a caveman, a pirate, and a pilgrim. (Image via: DC Comics)

In 2009’s Final Crisis, Darkseid hit Batman with his Omega beam and sent him back to the beginning of time. It’s fitting that this was the first DC event of the decade, as DC was on the verge of major changes, but this story would prove to be an anchor through the decade. After jumping around time, leaving his signature everywhere he went and even accidentally creating a new clan. And while Dick Grayson filled in for Batman during his absence, the world was definitely going to need Bruce Wayne again. 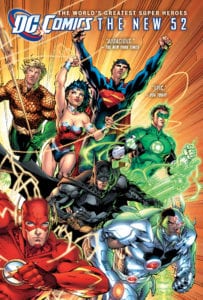 In Crisis on Infinite Earths, the Flash helped prevent the destruction of the multiverse. In Flashpoint, he breaks it. Trying to save his mother, Flash went back in time, and altered history drastically. When it was all put back together, the DC Universe was a much different place—and the second major reboot of DC Comics started: The New 52. The entire DC line started over with 52 titles. Some titles just kept going as if Flashpoint never happened, like Green Lantern and Batman. But there were many major changes too, such as Wally West, the second flash, being erased from existence. Wonder Woman’s origins were rewritten so that she was no longer made from clay, but was the daughter of Zeus, and a god herself. 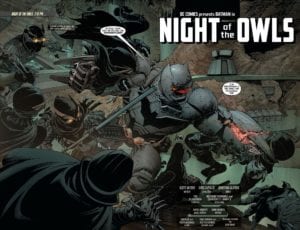 While Geoff Johns was the mastermind behind the New52, as well as writing the Flagship DC book, Justice League, it was Scott Snyder’s Batman that quickly became the crown jewel of new DC era. Night of the Owls, the first major event in the New52, and one of the first three DC events of the decade, had a lot to prove. One—did we still need big events in this new relaunch? What would these events look like? But as the Court of Owls took over Gotham and took down Batman, Snyder and the entire Bat-verse of writers were delivering one of the best Batman events in a decade. Ultimately, Night of the Owls showed that DC events wouldn’t just be necessary still, but that the New52 did exactly what it set out to do—give the world a new energy.

DC Events of the Decade, 2013: Batman: Death of the Family 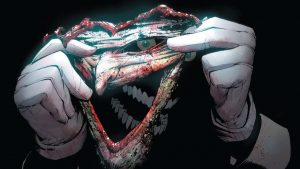 Yeah, Joker wore his own face after he had it ripped off. (Image via: DC Comics)

As big as Night of the Owls was, it was just practice. Death of the Family, now considered one of the best Joker stories ever told, was the first universe-shaking event. Well, Bat-verse shattering. In fact, the story had a bigger impact on the Bat-family than all the other Batman events in over a decade for DC—yes, even more than him dying. Joker broke the family. He made those closest to Batman turn against him and mistrust him in ways deeper than ever before. 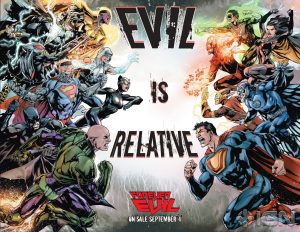 And that relative is usually the cool uncle. (Image via: DC Comics)

This is it. The Big One. The first line-wide crossover event of the New52, and definitely one of DC’s three biggest events of the last decade. Forever Evil is a story that seemed to go so well, they’re kind of doing it all over again with Year of the Villain. The Heroes lost in the Trinity War, which allowed for an evil version of the Justice League, from Earth-3, to invade Earth-0. Without heroes, it’s up to the villains to save the DC Universe, with Lex Luthor leading the charge. And once again, the event was a hit.

DC Events of the Decade, 2015: Convergence 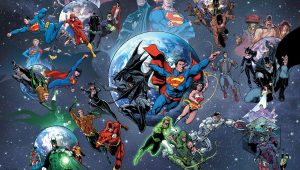 So…is there now one earth or 52 Earths, or infinite Earths or…wait, what? (Image via DC Comics)

In 2015, halfway through the decade, DC and Marvel both seemed to want to explore the history of their worlds through one big event. For DC, it was Convergence. This event was…a bit confusing. It Reboots Crisis on Infinite Earths, which was itself a reboot, and brings all pre-Flashpoint timelines and stories back, but also keeps the New52 timeline, while also ditching the New52 name and rebooting about half their titles with #1’s, but keeping their most popular titles with their original numbering. If you got through that sentence and feel like your brain was going to explode, that’s about right. 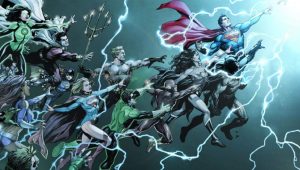 We really needed this. (Image Via DC Comics)

I know what you’re thinking—didn’t Convergence JUST reboot the DC universe, only four years after DC rebooted their universe with Flashpoint? Well, two reboot events weren’t enough, and DC wanted to try a reboot one more time this decade. Thankfully, Rebirth was a smooth experience. The first thing it did right was doing the exact opposite of a mega crossover event. Instead of a multi-issue, multi-tie-in six-month wallet-destroyer, the entire event was told in one issue. One. It basically looked at Crisis on Infinite Earths, Flashpoint, and Convergence and said “let’s do what it took these assholes 40+ issues to do in just one.” And damn did it work. It also provided the single most universe-changing moment of the decade for any comic house: Dr. Manhattan, of the Watchmen, was manipulating the DC Universe, and took ten years from our heroes.

DC Events of the Decade, 2017: Batman/The Flash: The Button 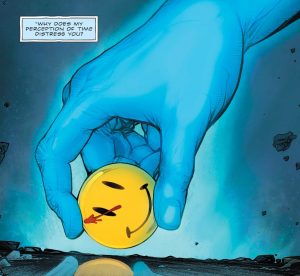 The button is probably made of batmanium…which is a real thing in the DC Universe. (Image via: DC Comics)

In Rebirth, Batman finds the Comedian’s blood-splattered button embedded in the batcave wall, and starts to investigate the strange artifact. He seems to get nowhere until the button reacts to one of Batman’s oldest trophies: the Psycho Pirate’s mask. When it does, he sees a glimpse of the Flashpoint Batman, his father, Thomas Wayne. This is actually a major reveal. For the better part of a decade, since the DC event ended, everyone assumed that the Flash ended the Flashpoint timeline. Well…didn’t work. This is kind of a fun story, with Batman and the Flash traveling the multiverse and time, trying to figure out the nature of the button. While it only leaves more questions for them, the event did set in stone that, yes, Dr. Manhattan is in the DC Universe, and he’s not going to be a good guy.

Just a reminder that this happened. (Image via: DC Comics)

Oddly, Dark Nights: Metal would have been the perfect way to close the decade, as the seeds of the story were planted in the first major DC events of the decade, The Return of Bruce Wayne. Once again, the multiverse is in trouble. This time, however, it’s all Batman’s fault. The event is definitely the craziest thing DC did in the last decade, feeling more like an actual rock opera somehow. Read more about it in our Epic Event series!

DC Events of the Decade, 2019: Heroes in Crisis 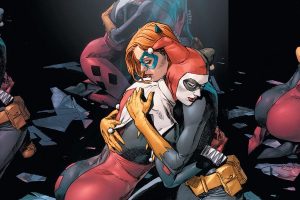 The least depressing part of the event. (Image via: DC Comics)

Of all the DC events in the last decade, Heroes in Crisis ends with a kind of “not with a bang, but a whimper.” But it’s a well-told whimper, thanks to Tim “I’m going to emotionally abuse my readers and win all the Eisners” King. There are other DC events from 2019, such as Doomsday Clock and Year of the Villain, but Doomsday Clock has suffered delay after delay, and most of Year of the Villain will be in 2020, marking it as the first big event of the next decade. The reason Heroes in Crisis is the most significant event at the end of the decade is that it actually shows the psychological effects these various events has on both heroes and villains. It’s a fitting end to the DC events of the decade.

But, of course, there were a lot more than ten DC crossover events in the last decade. In fact, there were just over 50 events. These characters are going through five major catastrophes per year. Is it any wonder they need a mental health facility?

Which DC events, listed above or not, were your favorites?