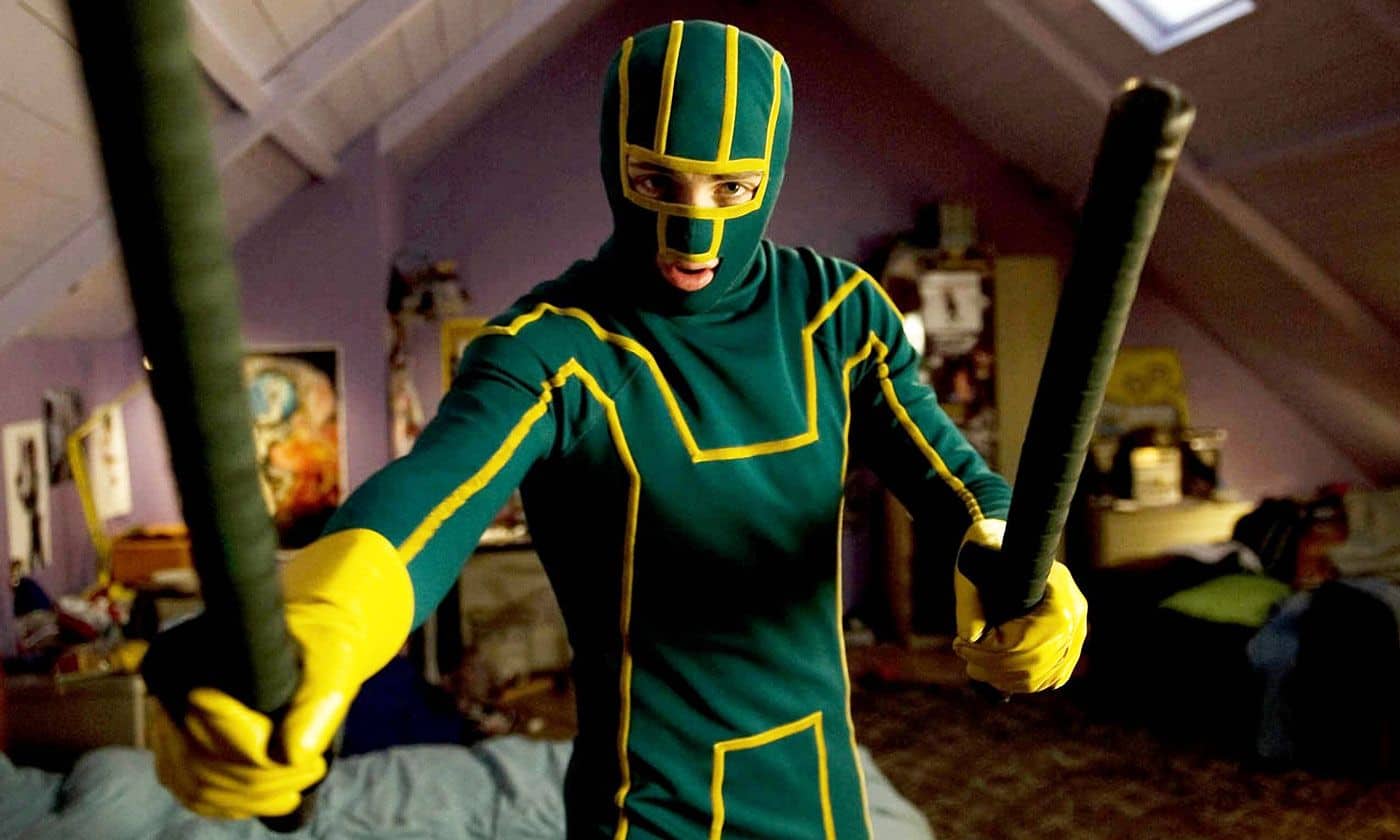 Have you ever watched a superhero movie or read a comic book and pictured yourself in the leading role? At some point in our lives, we’ve all wanted to throw on the cape and suit up in an intimidating outfit to prove that we could do it, too. Kick-Ass, the 2010 superhero film based on John Romita Jr and Mark Millar’s comic book follows what happens when someone decides to go through with this wish. In our retro review of Matthew Vaughn’s Kick-Ass we’ll take a look at how it holds up amongst a sea of other superhero films, and see if it deserves more attention a decade after its release.

Kick-Ass tells the story of Dave Lizewski (Aaron Taylor-Johnson), a teenager who has become restless enough from his mundane life that he’s willing to take some serious risks. While reading comic books with his friends, he poses the question of whether anyone has ever tried becoming a super-hero. He’s pretty sure that people have and decides to join them. Without too much planning, he orders a wet suit and starts training to do what he thinks super-heroes should do, like jumping from buildings.

In an embarrassing first-try with confronting villains (who are little more than car-thieving bullies), Dave gets stabbed. While not ideal, it does force doctors to replace some of his bones with metal. This increases his ability to endure pain. It also gives him the confidence boost that he needs to keep fighting crime. Dave eventually gets his moment in the spotlight, saving someone from a gang attack. His fighting is filmed, and everyone in New York quickly learns the name Kick-Ass. 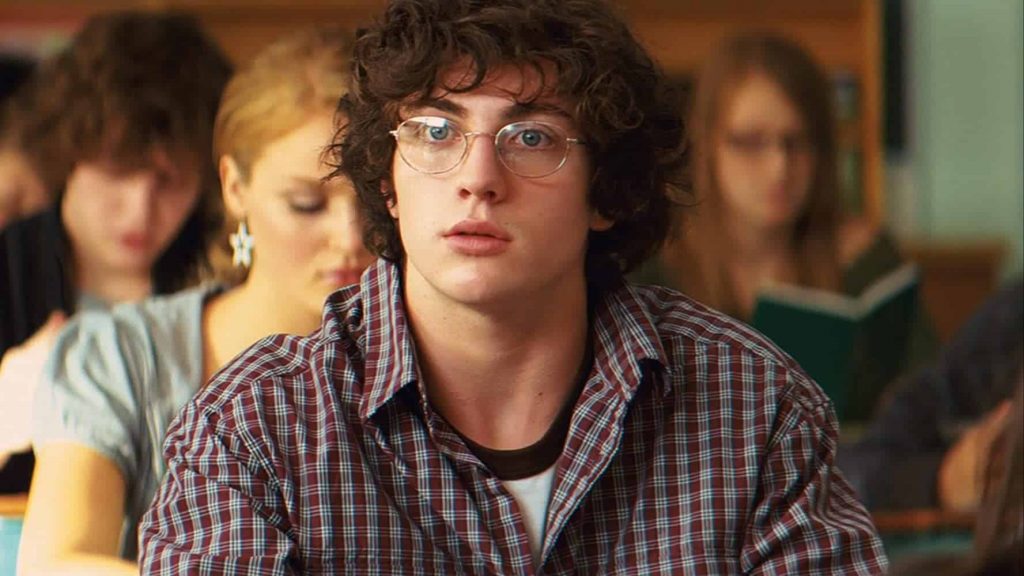 Kick-Ass might sound like it’s all about Kick-Ass. And while we love to watch such an awkward teenager fight crime with plenty of naivety, it’s the more experienced vigilantes who steal the show. New York has real crime going on, and Frank D’Amico, a mafia boss, framed the wrong guy. Damon Macready, a.k.a. Big Daddy (played hilariously by Nicholas Cage) has dedicated his life to getting revenge on D’Amico. He has the help of his young daughter, Mindy (Chloe Grace Moretz). Mindy, who goes by the name Hit-Girl, is ruthless, skilled, and has the advantage of being a non-suspicious 11-year-old girl.

Kick-Ass gets tied up with Big Daddy and Hit-Girl. Now, Dave doesn’t really know what he’s getting himself into. But when things start getting messy, he has no choice but to rely on the heroes that are clearly far more experienced than he is. They must deal with D’Amico and his son Chris. Chris who creates his own alias, Red Mist, as a way of using Kick-Ass, Hit-Girl and Big Daddy to come to them. The remainder of the film plays out with some bloody violence, awkward teenage comedic relief, and some old fashion revenge.

Why Is Kick-Ass So Fun?

I’ve watched films like Birds of Prey and wished that I could be as badass as they are. And while I know that I’ll never have superpowers, it’s still fun to fantasize about. One of the reasons that Kick-Ass is so fun to watch is that it lets us imagine what these fantasies could become. If we just had the bravery that Dave had, could that be us? Probably not. After all, he does need to get stabbed before he has any strength.

Dave starts off as a dorky teenager who gets frequently mugged. He transforms into a near-fearless guy who not only gets the girl but also gets to live out his wildest dreams. Other comic-book adaptations like Scott Pilgrim vs. the World are fun to watch because the protagonist is relatable and he stays that way. But while Dave starts out as relatable enough, he evolves throughout the film, forcing us to imagine if we could do the same.

It’s Outrageous In The Best Way

Nicholas Cage’s performance in Kick-Ass is both goofy and glorious. Cage based his Big Daddy voice on Adam West’s portrayal of Batman, paying homage to the DC hero. While characters like Dave and Chris clearly suited up based on the comic book heroes they were used to reading, Cage believed that Big Daddy would have known the vintage Batman best. So, while it’s hilarious to watch, the wacky performance is founded in honesty.

Not only does the film deliver the intensity of the dark world of superheroes, but it manages to stay true to the original comics. There are just enough visuals embedded throughout to remind you that it’s an adaptation. However, unlike many comic book films, there’s no need to know any of its backstory. It works as a companion to the comics but still thrives on its own.

The film wasn’t nearly as successful as many other Marvel films like Avengers: Endgame or anything else in the MCU. However, it did pull in $96.2 million on a budget of $30 million. It received generally favorable reviews, earning a sequel in 2013. The film garnered plenty of controversy, making us wonder if a film like Kick-Ass could still be released today.

As mentioned, Hit-Girl is an 11-year-old girl. Kick-Ass is full of violence, including guns, knives, and other creative means of killing. While there are plenty of adults who do some of this killing, Hit-Girl is responsible for most of it. Additionally, the curse words that come out of her mouth were enough to have family advocacy groups become outraged. Films with violence by children and similar themes have often been poorly received, surrounded by controversy, or even canceled in the case of The Hunt, due to some real-world tragedies. 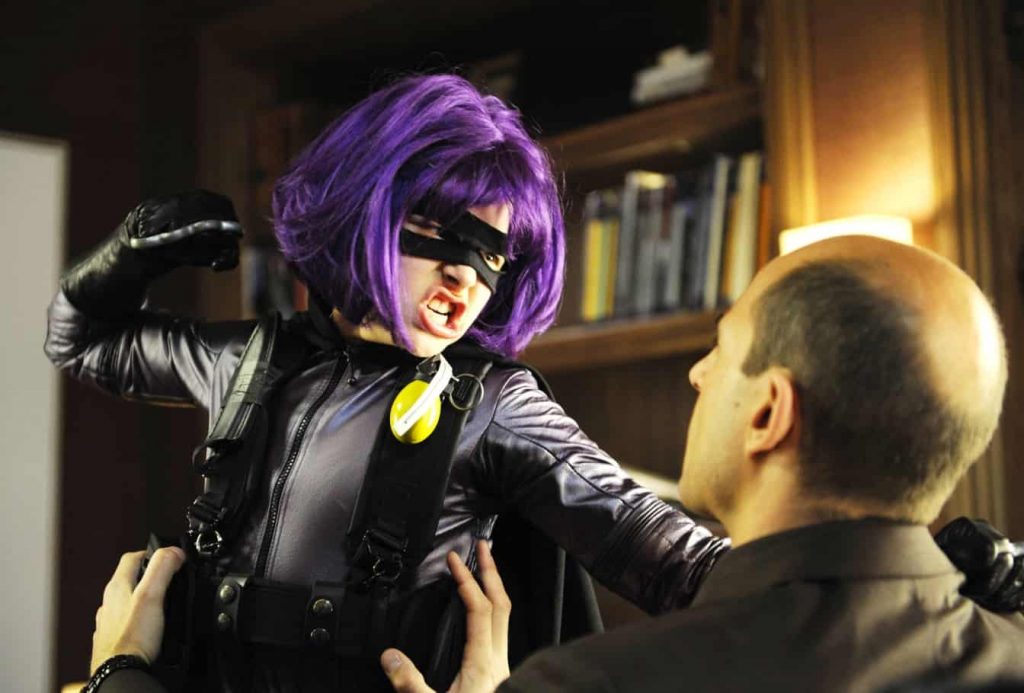 Even The Stars Have Some Thoughts

Jim Carrey, most recently seen in Sonic the Hedgehog, starred in Kick-Ass 2. Carrey was clearly aware of the level of violence in the first film and participated in even more while filming the sequel. Though the actor eventually refused to promote it. The horrible Sandy Hook shooting occurred almost immediately after filming the sequel, prompting Carrey to refuse to do any press, stating that he couldn’t support the level of violence after a change of heart.

Considering how much controversy the two films gathered from such intense violence, it’s worth considering whether the same story would work today. We’re used to seeing intense violence in films, especially superhero stories. Deadpool is equally as violent as Kick-Ass. And, while some have been outraged at the violence, it still makes money. There’d likely be zero concern if Hit-Girl was older. Though, her character wouldn’t have the same appeal as it does now.

It’s a Retro Review, But There’s Still A Future for Kick-Ass

The series of comic books covered far more material than both Kick-Ass and its sequel. A third film in the franchise was in the works during the production of the sequel. However, the sequel was enough of a bomb at the box-office that the demand for it just wasn’t there.  Years later, in 2019, it was announced that a third film was finally in development, with actors including Taylor-Johnson set to reprise their roles. Little is known, but we can be certain that we’ve not seen the last of Kick-Ass.

Readers, do you remember watching Kick-Ass when it first released in 2010? Whether it’s been years since your last watch, or you’ve yet to see it, this retro review of Kick-Ass is here to tell you that it’s worth a watch (or re-watch). It’s dark, funny, and exciting in ways that many comic book adaptations aren’t.