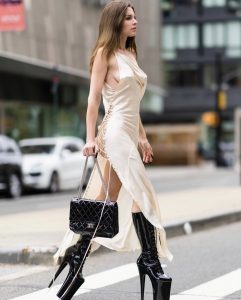 If there is one actress who has been the cynosure of media outlets recently, it is Julia Fox. However, this time around she isn’t trending for her raccoon eyes, any viral TikTok video, or any of Supreme’s ad campaigns.

The actress stepped out on New York streets on April 23 and her outfit has left fans completely wild. Taking a casual stroll through NY, Ms. Fox went all out with her latest street style fit, wearing a silk satin dress.

The dress, made by the popular Stolkholm designer, Jade Cropper was laced up at the sides, baring her skin. The cream-colored slip dress revealed a bit of cleavage on the sides. The gown also featured a waist-high side slit with cross springs above the thigh, adding a daring edge to the outfit. The 32-year-old who seems to be taking some lessons from Lady Gaga didn’t play it safe one bit. Julia paired her dress with sky-high platform black boots.

The stilettos added almost a foot to her height, mirroring the shoes Lady Gaga is famously known for. While some of Fox’s fans showed some worry about her choice of footwear, Julia Fox seemed to be striding comfortably, as she strolled the streets with much elegance.

To complete what is an already astonishing outfit, she rocked a black Chanel bag. The former model previously mentioned her fear concerning walking around with her prized Birkin bag. She shared the pictures on her Instagram with the caption “I 💔 NY”

Her appearance on the streets of New York comes at a time when there are rumors that she is being considered for casting for the Season 13 of the Real Housewives of the New York City.

Andy Cohen has been the executive producer of the reality show for over a decade and a half. He recently disclosed that the show is in a stage of rebooting and recasting. In his words, Cohen sees it as “the most exciting casting proposition” in his almost two-decade career.

However, reports say there has been no direct conversation between the actress and the producers.

Just some weeks ago, the actress made headlines when she was spotted carrying the pricey Birkin bag her ex Kanye bought for her. Julia was with the bag at the same restaurant it was given to her on her birthday.

The Uncut gems actress’ relationship with her then-boyfriend, Rapper, and business mogul Kanye West made several headlines in media outlets across the globe and trended for weeks on the internet leaving many speculative about the relationship. At the height of the whirlwind romance and fanfare, Ms. Fox gave a detailed account of their early dates to Interview Magazine.

Fox didn’t hide how much she valued the Birkin bag. Speaking to New York Times the actress said, “I don’t know if you know about owning a Birkin when you’re not a rich person, but it’s like the most anxiety-inducing thing ever. You’re checking on the Birkin, making sure it’s still there, that it didn’t magically grow wings. It’s scary to have a Birkin. It’s a lot of pressure.”

Like her or hate her, Julia Fox is one celebrity whose fan base seems to be growing by the second. Her bold and unconventional street styles create excitement for her fans and she doesn’t seem to be slowing down anytime soon.

MoviesPop CultureTV Shows
Streaming Has Risen 85% In Wake Of Coronavirus

With so many folks at home due to furloughs, shutdowns, and stay-at-home orders, it’s unsurprising that they’d turn to their TVs. With the vast array of choice streaming services give us, there’s always something to […]

BY Salomé Gonstad April 1, 2020
Pop Culture
Wonder Woman #750 is a Delightful Celebration of the “1st Superhero”

Seven hundred and fifty issues. Along with Superman and Batman, Wonder Woman is one of the most important Golden Age heroes—that’s why they are the “trinity.” However, ever since she made that hard superhero landing […]

The beginning of the development of Fast and Furious latest sequel got off to a rather bumpy start. That is due to the departure of its director Justin Lin, who has directed five films of […]