After testing positive for COVID-19, George R R Martin missed the House of the Dragon premiere screening on Wednesday in Los Angeles. The Song of Ice and Fire author acknowledged in a video posted to his website that he had tested positive for the virus after attending San Diego Comic-Con on Saturday to preview the Game of Thrones prequel series. Martin took part in the show’s Hall H discussion together with executive producer Ryan J. Condal, Paddy Considine, Matt Smith, Olivia Cooke, Emma D’Arcy, Steve Toussaint, Eve Best, Fabien Frankele, Milly Alcock, and Emily Carey, who also co-created the HBO spinoff with Martin. The trailer garnered a lot of buzz from fans and normies alike.

Martin was not present at a screening of the House of the Dragon season premiere because he tested positive for COVID on Tuesday, HBO and HBO Max Chief Content Officer Casey Bloys informed the crowd. Martin claimed in the nine-minute video clip that you can watch below that he is isolating himself in a Los Angeles hotel room and feeling “a little sniffly.” 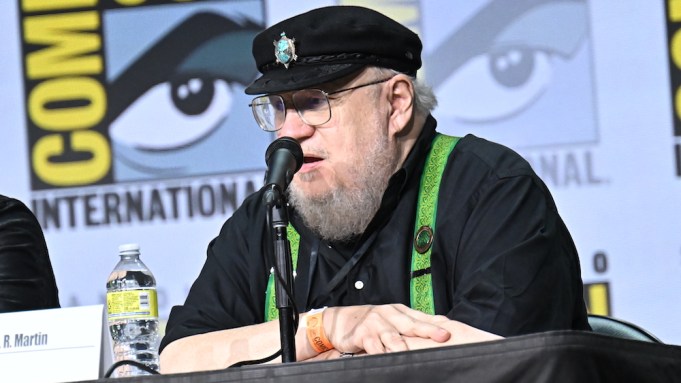 “I had a trip to the West Coast, starting at San Diego Comic-Con for the big panel on House of the Dragon, the new successor show to Game of Thrones,” Martin said in the video. “And that was to be followed by a week in Los Angeles where I had a lot of meetings, and I had two big premieres, and then a few other things.” George R R Martin explained. This is because of California’s COVID surge and the spread of Omicron subvariants. “I decided to be very cautious and conservative. I did the panel, and that was a lot of fun. But I skipped all of the parties. I did not go on the convention floor, and I canceled my in-person autographing. And I went out for a few meals. And that was fine.”

After traveling by car from San Diego to Los Angeles, “The first day in Los Angeles yesterday, I woke up and tested positive for COVID,” Martin said. “You may have heard that by now. I guess rumors have ways of spreading out on the internet. And, yes, I am positive for COVID.”

“I was a startled as any of you because I did not really think I had any symptoms or very, very minor symptoms,” he continued. “I was sniffling a little, and that’s pretty much still where I am. This is the second day, I’m still sniffling a little and occasionally coughing, but mostly I feel fine.”

Telling his fans that he didn’t “want to leave the matter unaddressed.” George R R Martin said it’s “a mystery” how he tested positive for breakthrough COVID. “Because I am positive, but everybody around me is negative.”

The author of The Winds of Winter assured readers that he has “been very careful,” assuring fans, “I’m fully vaccinated, and I’ve had two booster shots, and I got the the best mask that one could possibly get and wore it in all public settings.” Martin only took off his mask to eat and at the House of the Dragon Comic-Con event. George R R Martin added, “This virus is complicated. I feel a little sniffy, but really, nothing bad. I’ve had worse colds, so I hope it will stay that way for the duration of its run.”

House of the Dragon chronicles the tale of House Targaryen and is based on George R R Martin’s Fire & Blood. It happened 200 years before the events of Game of Thrones. House of the Dragon will make its television debut on HBO and HBO Max on August 21. It stars Paddy Considine, Matt Smith, Olivia Cooke, Emma D’Arcy, Steve Toussaint, Eve Best, Sonoya Mizuno, Fabien Frankel, and Rhys Ifans.

Darren Aronofsky’s The Whale Transforms Brendan Fraser Into A 600-Pound Man
Will John Krasinski Be Back In MCU’s Fantastic Four Movie?