This week marks a full 10 years since Game of Thrones first premiered on HBO. And in the years since the show ended, there is one thing that I miss the most: the viewing party. Now this might be a result of the pandemic keeping us all inside. We are unable to gather together in my tiny living room to crowd around a television. But there was a community around the show that brought people together in a way that few other shows have been able to achieve. Most recently the closest collective experience I had watching a show with other people was WandaVision. But that was primarily because half of the Comic Years staff gathered together on Saturday nights to record a podcast discussing each episode. So what made the Game of Thrones viewing parties so unique? And will we ever be able to do something like this again?

The Game of Thrones Viewing Parties Brought People Together

One thing that made Game of Thrones an ideal show for a viewing party was the wide range of viewers. I remember when the first episode aired, I had already read all of the books (that were out) but I didn’t have HBO. The way that I watched the premiere was by streaming the first episode on my tiny laptop, all alone in my apartment. I remember wondering if anyone other than long-time fans of the books would be into the show. I never expected what was to come, or how the show would draw in non-genre fans.

It was only after a few episodes had aired that I found friends with HBO who let me come over every week to watch with them. This was how the viewing parties began. It started off as a necessity, since so few people subscribed to HBO at that time. I had to find that one friend who paid for the network, and travel to them on Sunday evenings. I remember that my boyfriend had not read the books, and he had a hundred wiki tabs open to figure out who was who and what was going on. This was the beginning of endless theorizing and speculation that marked the show’s most devoted fans.

Watching Game of Thrones Together Was A Collective Trauma Experience 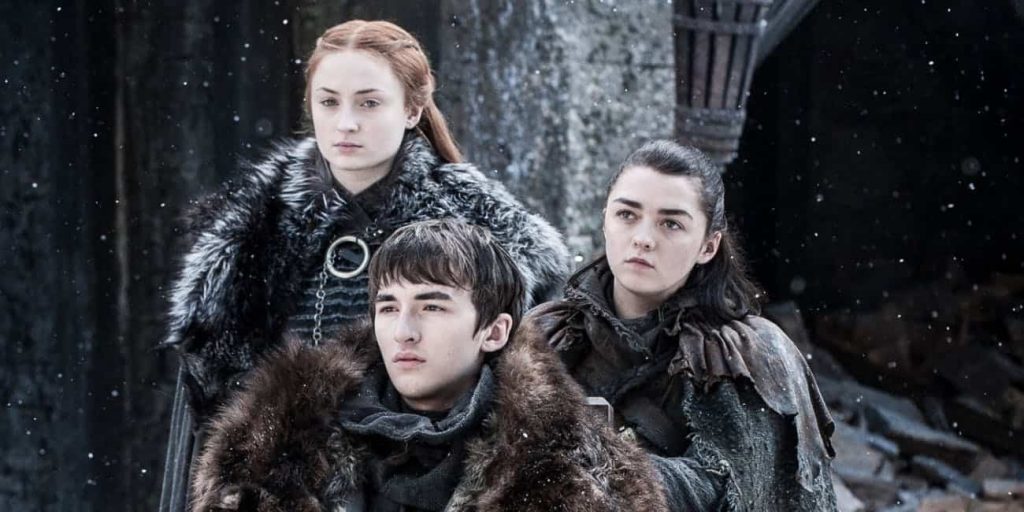 As the resident expert on the books in my friend group, people often came to me for these answers. The most significant divide in the fandom was between fans that had read the books, and those who had not. I always tried to keep from spoiling people, but sometimes my reactions during a Game of Thrones viewing party got the better of me. I recall that during the infamous “Red Wedding” episode I audibly sobbed aloud when I heard the band begin to play “The Rains of Castamere.” That reaction tipped off several of my friends to the fact that something terrible was about to happen. (Sorry everyone.) But it never ruined anyone’s experience of the show, reacting together was a huge part of the viewing parties I held.

Game of Thrones was a collective bonding experience. But one of the ways it bonded us was through the trauma we endured together while watching. We mourned Ned Stark together at the end of season one. We endured the horror of the Red Wedding, and rejoiced in the ugly demise of Joffrey at the Purple Wedding. Together we suffered pain and madness, bad writing and directing and we made it better through our discussions afterwards on grief, love, and mental illness. It brought many of us closer together, in a way that no show had done for me since The X-Files.

Author George R.R. Martin is famously prone to over-description in the Game of Thrones books. There are pages upon pages describing food, and that imagery effectively made it to screen. So it was inevitable that the food would become inextricable from the viewing party experience.

In 2012, an official Game of Thrones cookbook came out titled A Feast of Ice and Fire. Long before I owned a copy, I was scouring the website that it came from – The Inn at the Crossroads – for recipes. My Game of Thrones viewing party events were always feasts, themed around whatever was happening in the episode. At a time when I was surrounded by college students, I think a lot of people originally showed up for free food and then found themselves pulled into the viewing experience. And some people who would have given up on the show much earlier kept watching because of my feasts.

Image via Inn At The Crossroads

I got clever with the feasts. Dropping subtle hints about what I knew would happen in each episode into the food I prepared. For the “Red Wedding” episode, I made giant loaves of bread filled with salt. Every single person who walked through my door had to eat a piece. I told them about the old tradition of eating bread and salt when entering a household to ensure the guest rite of safety. (This is actually an old tradition in many cultures – one that GRRM borrowed from the real world.)

These feasts also gave me some fundamental cooking skills that have carried through into real life. And I still make some of the recipes from that cookbook regularly. People still talk about my pork pie, cobbled together from the modern and medieval versions found in the cookbook. And making the bread and salt gave me some practice for all of those loaves of bread I baked during quarantine years later.

Will We Ever Have A Collective Viewing Experience Like Game of Thrones Again?

Towards the end of Game of Thrones, people started asking if we would ever have another collective show experience like this again. There was something revolutionary about the way everyone was watching the same show, and talking about week after week. With the era of binge-watching upon us, it seems as though this type of weekly format would be lost. Most people consume content as quickly as they can, and then forget about it afterwards. However, many streaming networks have begun to return to the weekly format of television shows. Disney+ has capitalized on this trend successfully by releasing series like The Mandalorian and WandaVision weekly. This had led to an uptick in fans dissecting each episodes on social media, and amongst their own groups. This kind of fan engagement is good for shows, and allows viewers to feel like they are more involved.

We Have Already Had Several Collective Viewing Experiences Post-GOT

I don’t think that Game of Thrones was the last collective viewing experience we will all share. But at the same time, I do think it is an experience that we shouldn’t necessarily repeat. The Game of Thrones fandom became increasingly toxic towards the end, with fans fighting over expectations vs. reality. And we were all so hyped up for the end of the show, that by the time it was over even the most devoted viewers (like myself) were completely burnt out by it. We should be watching shows to enjoy them, and to share in an experience with others.

While Game of Thrones had a lot of issues, it also paved the way for other epic fantasy series to come to life. I expect the next viewing party I plan will happen when Amazon finally brings The Wheel of Time to screen. Now I just have to think of what I will cook for the feasts, once everyone can safely gather together in my tiny living room around a big screen once more.

Did you ever host viewing parties for Game of Thrones? Share your stories with Comic Years on Facebook and Twitter today, and let us know what you expect the next collective TV viewing experience to be.