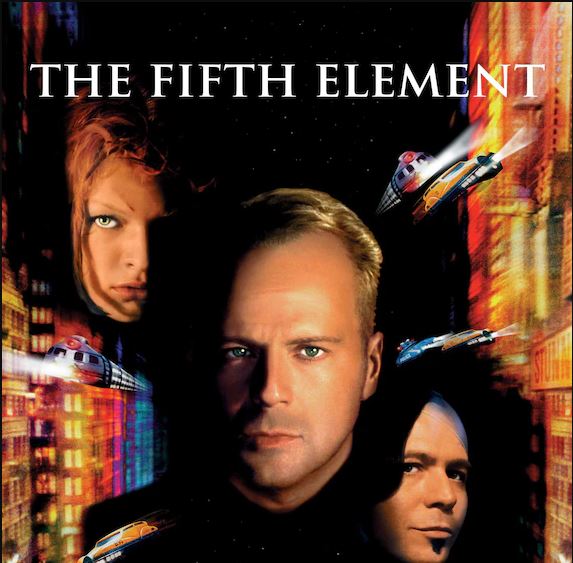 It has just been Fifth Element’s 25th Anniversary, and we will celebrate it by remembering some of the most memorable moments of the film. This excellent film, directed by Luc Besson, was released in May 1997. At the time, the film was a huge success, grossing $263.9 million on a budget of $90 million. The film takes place in the future, specifically in the year 2259. Evil stalks the world, and a cab driver (played by Bruce Willis) encounters the only weapon capable of stopping it (played by Mila Jovovich).

Cast and Characters of the Movie 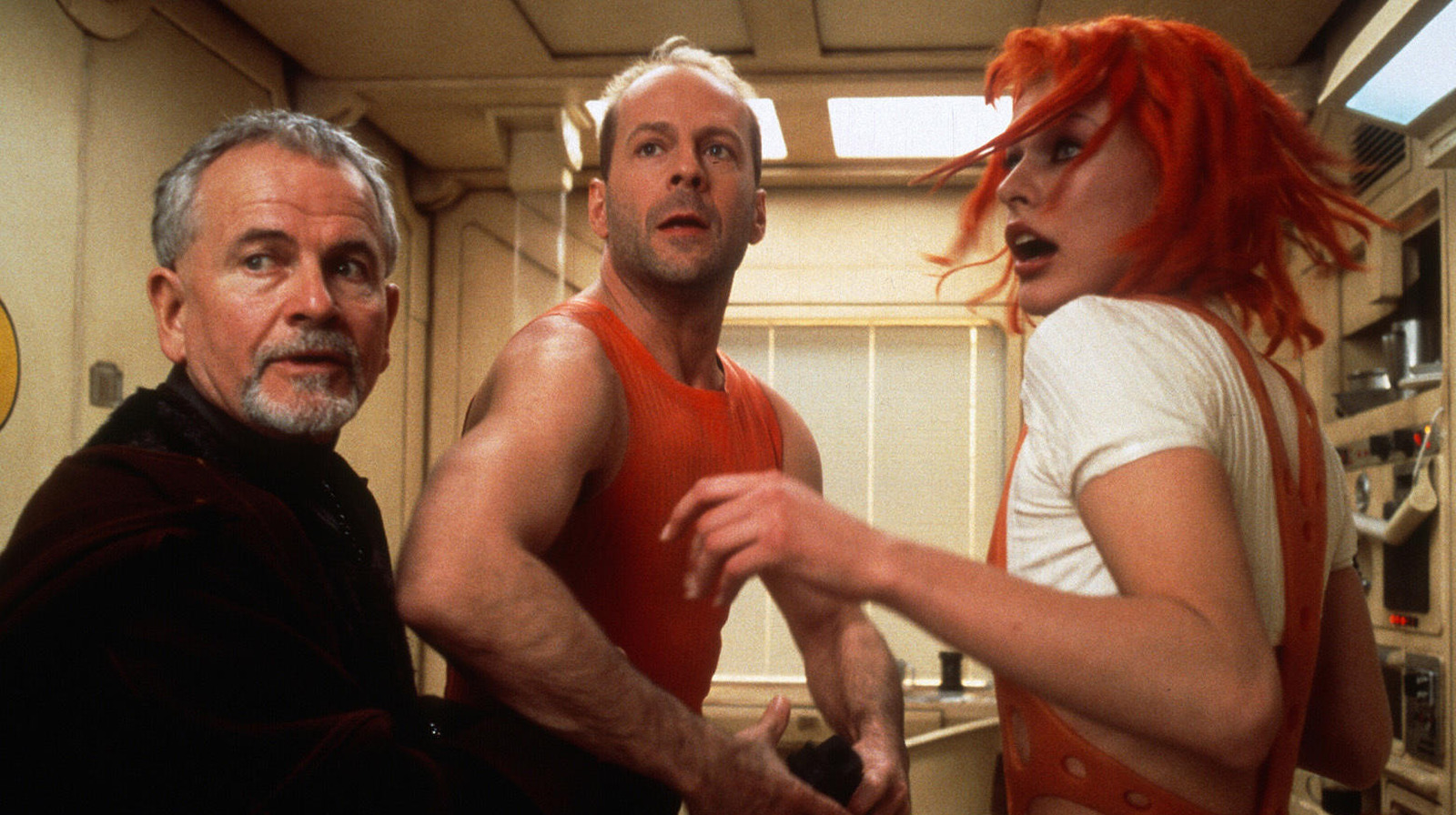 The characters that take part in this adventure are also masterfully created. The actors who play them are also exceptional, and it is necessary to mention them in this Fifth Element 25th Anniversary.

In the leading role, we have Bruce Willis, who plays Korben Dallas. This character is a former Federated Army Special Forces soldier who now makes his living as a cab driver.

The main villain is Jean-Baptiste Emanuel Zorg, played by Gary Oldman. This character is the head of a large corporation called Zorg Industries.

Leeloo is the co-star of the film, played excellently by Mila Jovovich. Leeloo is one of the Supreme Beings of the Universe and the Fifth Element. The actress had already had some roles. However, this was the one that catapulted her to fame.

The Most Memorable Moments of the Fifth Element

If there is one thing this movie can boast, we all have in our memory some scene that impacted us. It is a film that you can repeatedly watch, as it is full of action and funny moments. It is an adventure that takes us on several journeys. We travel through time, going from ancient Egypt to the future in the year 2259. And it also takes us on a journey through space, traveling from earth to space on a luxury cruise ship.

It’s hard to select scenes as the film is full of great moments. To celebrate the Fifth Element’s 25th Anniversary, we will review five of the film’s most memorable moments. 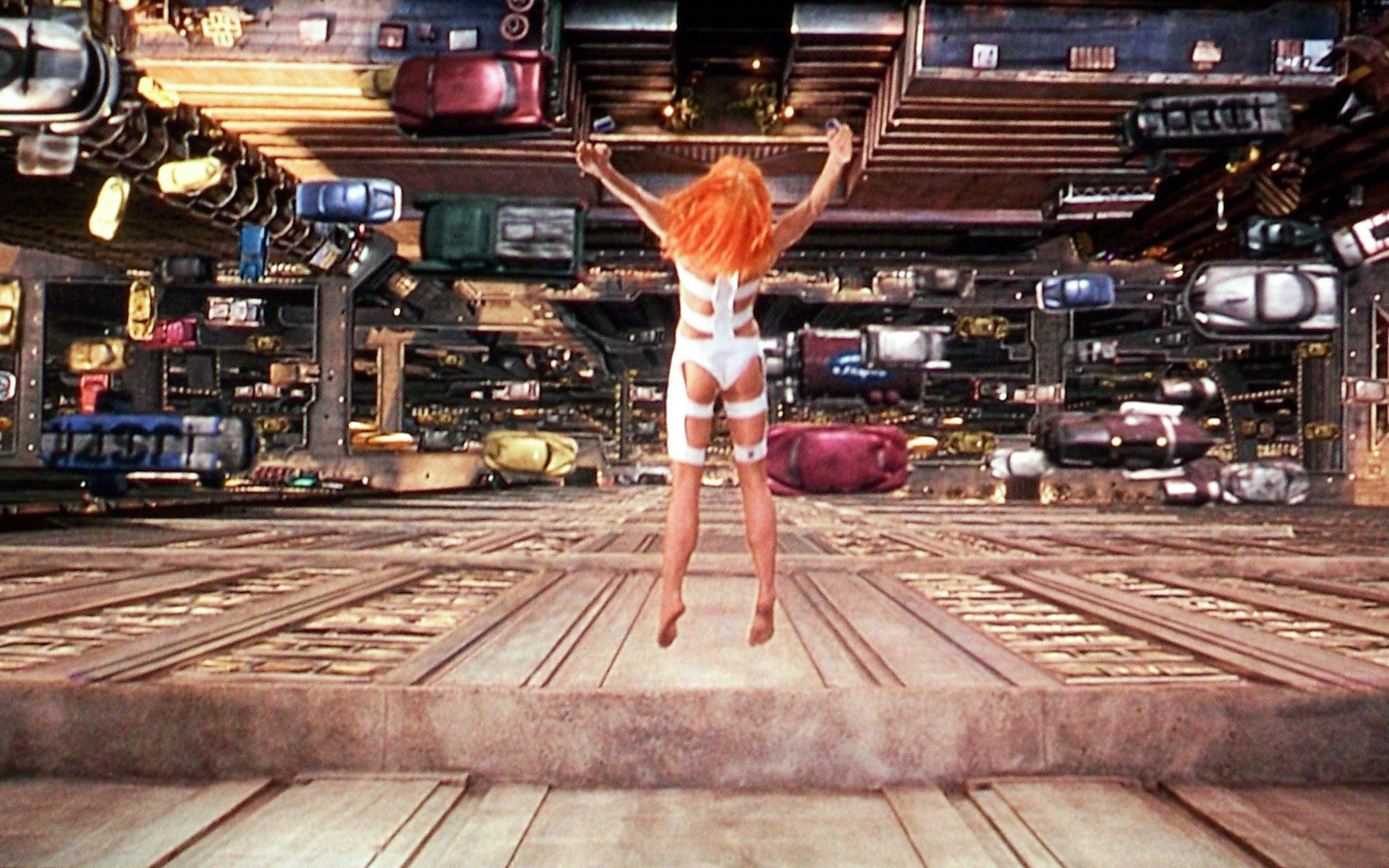 We see Mila Jovovich’s character escape after being reconstructed from an arm in a lab. The frightened woman escapes through a ventilation duct, through which she reaches a ledge of the building. The futuristic city, full of flying cars, is visible from the facade. Seeing herself cornered, Leeloo decides to jump into the void until she falls into Korben Dallas’ cab. This moment has become an iconic scene in science fiction cinema. 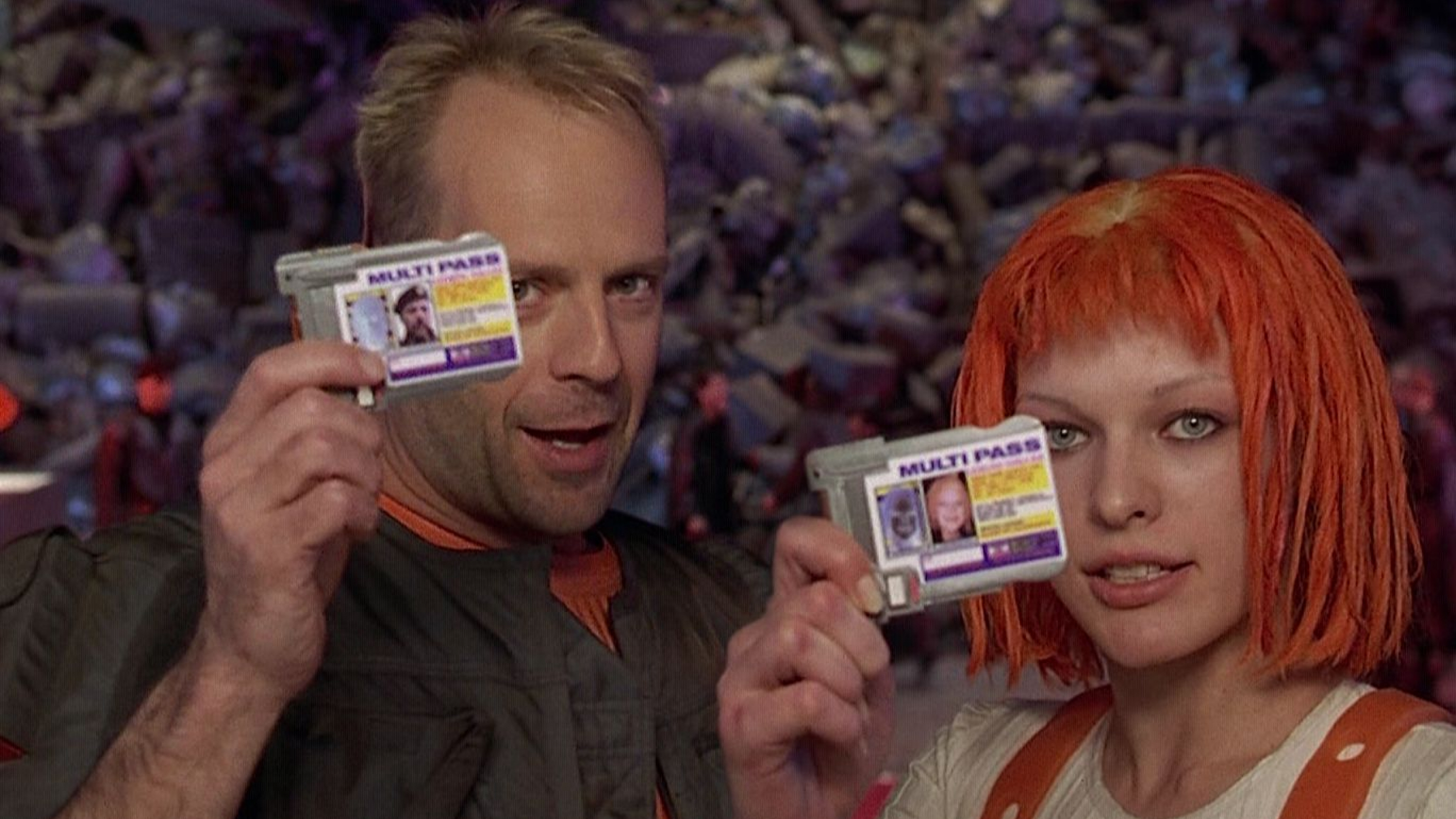 If you tell a random person the word “Multipass”, there is a 50% chance they will know what you are talking about. This scene became part of popular culture because of its simplicity. Leeloo shows an ID at a customs checkpoint, repeating one of the few words, Multi-pass.

Diva at the Opera 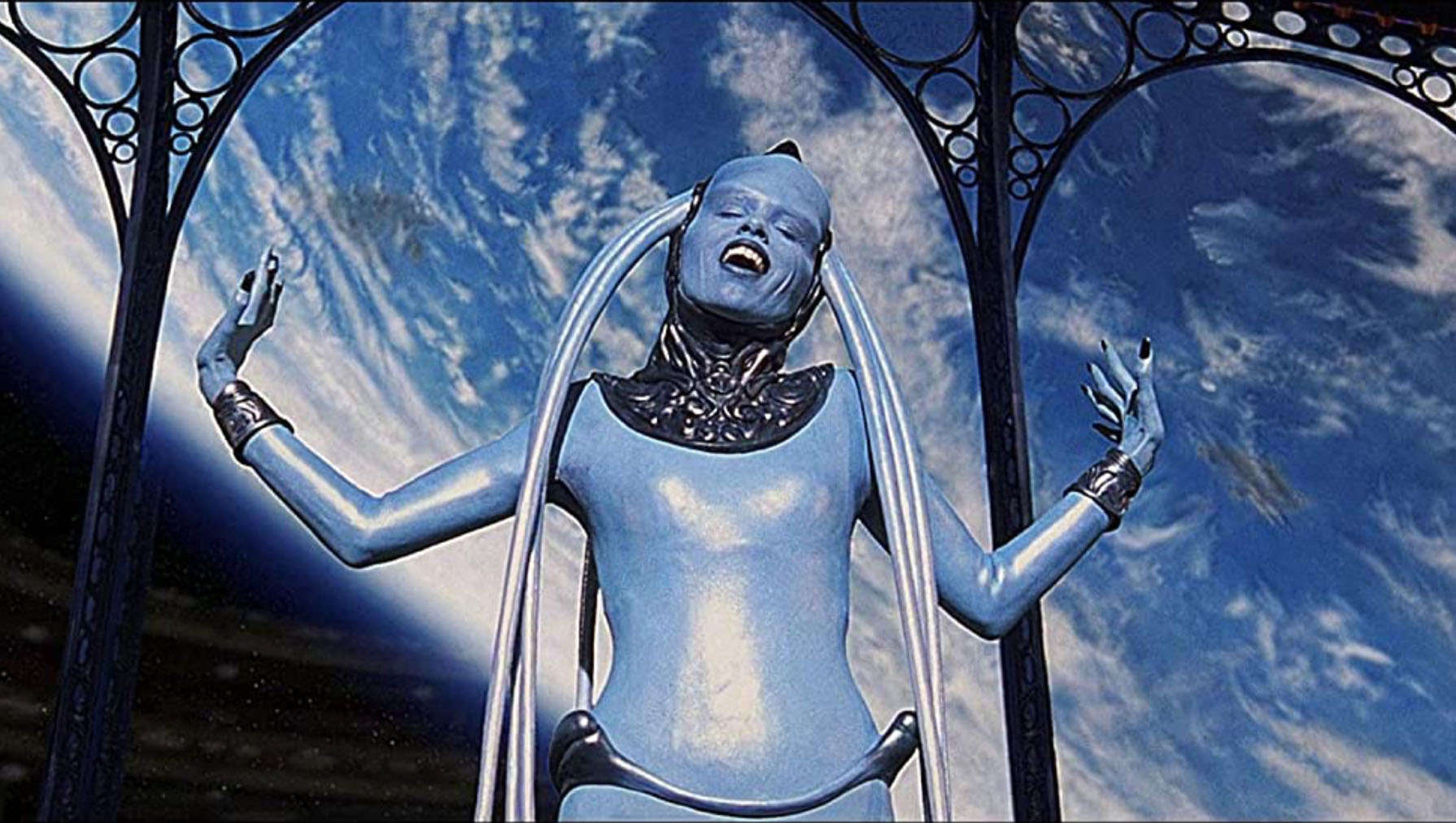 In this scene, an alien named Plavalaguna sings an impressive opera song. French actress Maiwenn Le Besco plays the performance, then-wife of Luc Besson. Albanian opera singer Inva Mula-Tchako provides her singing voice. The performance is interwoven with moments of intense action, making it the undisputed climax of the film. 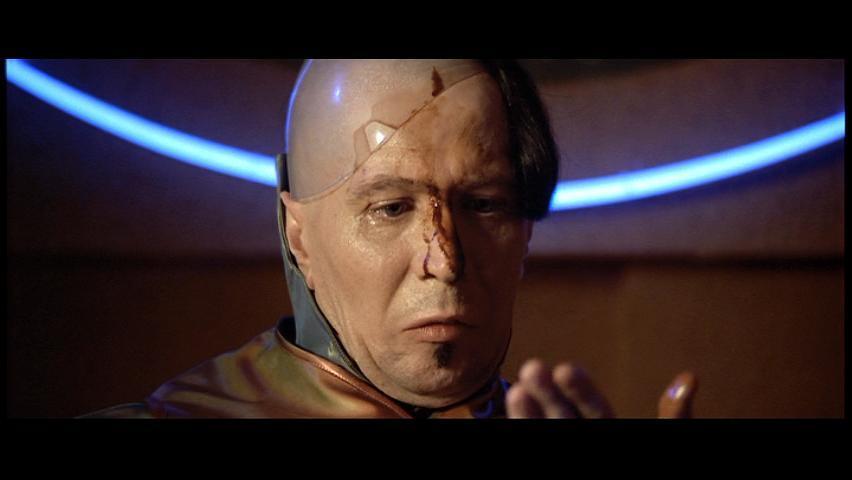 In this scene, the film’s villain, Jean-Baptiste Emanuel Zorg, emanates a strange liquid, and this event happens while communicating with his boss, Mr. Shadow. The nature of this liquid is unknown. Some say it is blood, and others say it is a strange dark substance. We have all been left with the memory of the horror the villain feels after speaking with Mr. Shadow.

The Protagonists Open the Stones 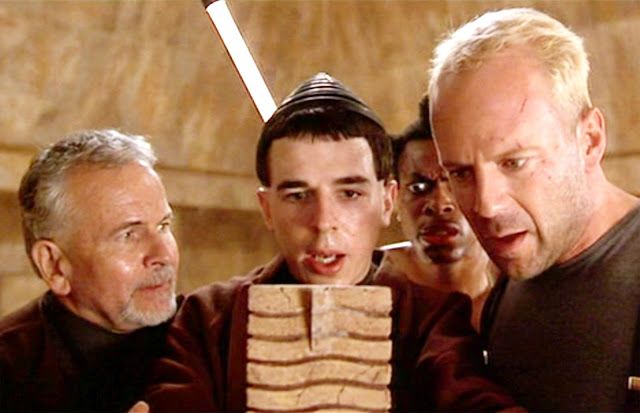 This moment is what many fans consider their favorite scene of the movie. In this final scene, the main characters use the four elements (earth, sea, fire, and air) to open the rocks. To open the first one, they blow on it. For the second one, they pour sand on it. For the third one, they wring sweat from a handkerchief, and for the fourth one, they light a match. At this point, the last element is the fifth, which unleashes its power Korben Dallas and Leeloo star in a romantic kiss. This love scene finally unleashes the power of the rocks, and with it, they destroy their enemies.

This film is, without a doubt, one of the best science fiction movies ever made. So then, what better way to celebrate Fifth Element’s 25th Anniversary than by revisiting it. What’s your favorite scene from these? Do you have a favorite scene that we didn’t mention?