Eternals Streaming On Disney+ - A Defense Of This Beautiful Marvel Movie

Chloé Zhao’s Eternals started streaming on Disney+ this week, and with it came the opportunity for a lot of people to see it for the first time. Or at least for the first time since last year. After weeks of reading a silly amount of scathing reviews and hearing Eternals described as Marvel’s worst movie, I finally had the chance to watch it, and it seems like a lot of angry people watched a totally different movie. Though it makes zero sense why a defense of Eternals is even necessary, we’re going to look at what worked in this movie counter to some of the feedback it has received now that we’ve had a chance to try streaming it at home. Worth noting, Eternals is one of the movies streaming on Disney+ that features the expanded aspect ratio found on IMAX screens for its home release. There’s a lot of this movie to love (or not love, apparently).

Some of the most frequently discussed critiques of Defense of Eternals are that it’s boring, long, confusing, gay people exist, and there’s a sex scene. All that plus about half of the 1-2 star reviewers on Rotten Tomatoes said they fell asleep. Hard to say if that’s a complaint or a celebration. The prevalence of these complaints has been conveniently depicted by a word cloud generated about about 90 Rotten Tomatoes audience reviews at or below two stars. Studying this text confirms a few major points. 1) Most of the complaints are the same or similar. 2) A lot of complaints are contradictory. 3) Sleep deprivation is a real problem. 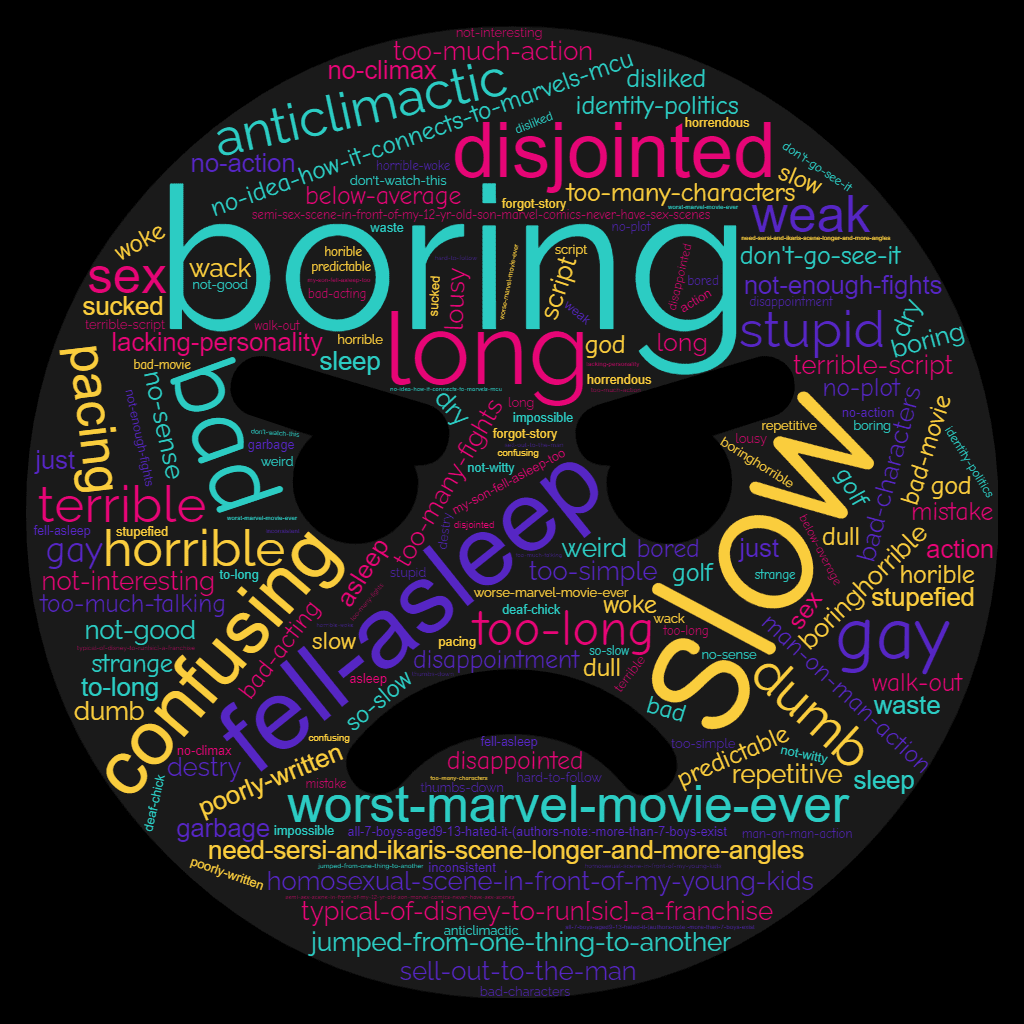 First, a Defense of Eternals doesn’t mean we think it’s flawless. There are some valid critiques of Eternals. It’s an enjoyable movie, but it’s not perfect by any means. They keep with the Marvel trend of introducing a villain from the comics for one movie and then slaughtering them. Some of the SFX did feel a little disconnected and floaty. Marvel has done amazing work with having CGI that feels weighty and real, and the deviants felt more like an overlay than a participant. And, criminally, one reviewer pointed out that their movie theater was really cold. How could you, Marvel?

Second, we can get some of the shallow and weak critiques of Eternals out of the way too. There was a sex scene. Sure, yeah, but there are baking tutorials that get saucier than that. By the time you locate your good clutchin’ pearls, the scene will be over. Now that Eternals is streaming on Disney+, you can skip the scene or when it comes on, just go grab a snack. Other astute reviewers may have noted there were gay characters in this one. There sure were. Gay people were present. We do that sometimes. The cool thing about irrational head-empty critiques like that one is that they don’t deserve a thoughtful response. Those reviewers can just pull up their khakis and cope. Moving on. 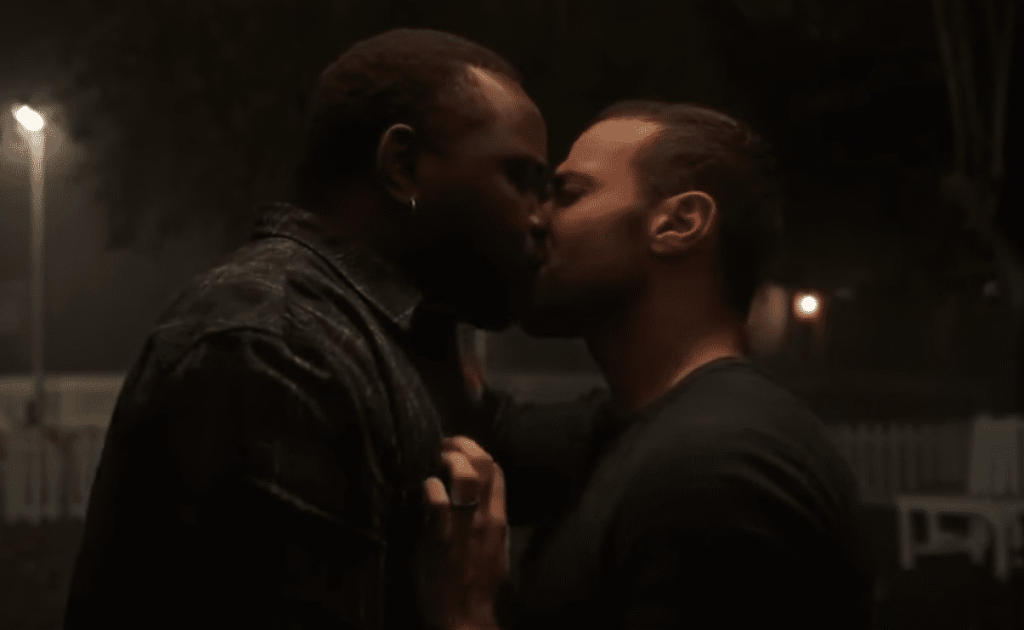 Streaming Eternals at Home on Disney+ Doesn’t Change the Pace (It May Actually Help!)

The most common objection about Eternals is that it’s boring. First, boring is subjective. However, based on some of the other comments, namely “pacing,” “slow,” and “disjointed,” we can get some idea of what people were bored with. There is definitely some truth that the pacing for Eternals was different from other Marvel movies. If we had to compare it to anything, one of the most similar movies is actually Endgame. Both movies are split among parallel stories of a bunch of different characters across time. They’re each interspersed with small action sequences and culminate in a bigger one at the end. And they felt like endings to a story that had been building for a long time. Because they were. A lot of reviewers complained that the story was all over the place, but it just seemed like they weren’t willing to keep up with the incredibly clear labels indicating when and where something was happening. To step away from the Eternals defense for a moment, it was a little formulaic in that every time a new character was introduced, we’d get a scene right after showing their history and relationships with the other characters. If reviewers think Eternals was too confusing to process because it switched characters and times, they must have been absolutely vicious to Game of Thrones.

This Is a Big Marvel Movie That’s a Lot of Things, Boring Is Not One of Them

A lot of negative reviews called Eternals boring. Depending on how much someone is paid for their review, they use more or less flowery language to say this, but critics consistently note that the movie couldn’t hold their attention. A wild number also say they fell asleep mid-watch.

This was the critique that made me really wonder if I’d watched the same movie. Granted, I saw Eternals at home, streaming on Disney+. But that shouldn’t significantly change a viewing experience. What about this movie was boring? Is it the action sequences? Because they jump into those pretty quickly. We’ve barely met Kit Harrington before we see him floundering in front of a Deviant while Sersi leaps around doing alchemy without a transmutation circle. Was it the characters? Because there’s a limited amount you can do to get audiences invested in 10 distinct characters. Maybe the visuals weren’t grabby enough? The main evil Deviant did kind of look like a 2015 sliver token from Magic the Gathering. But what can you do? They needed a red herring. 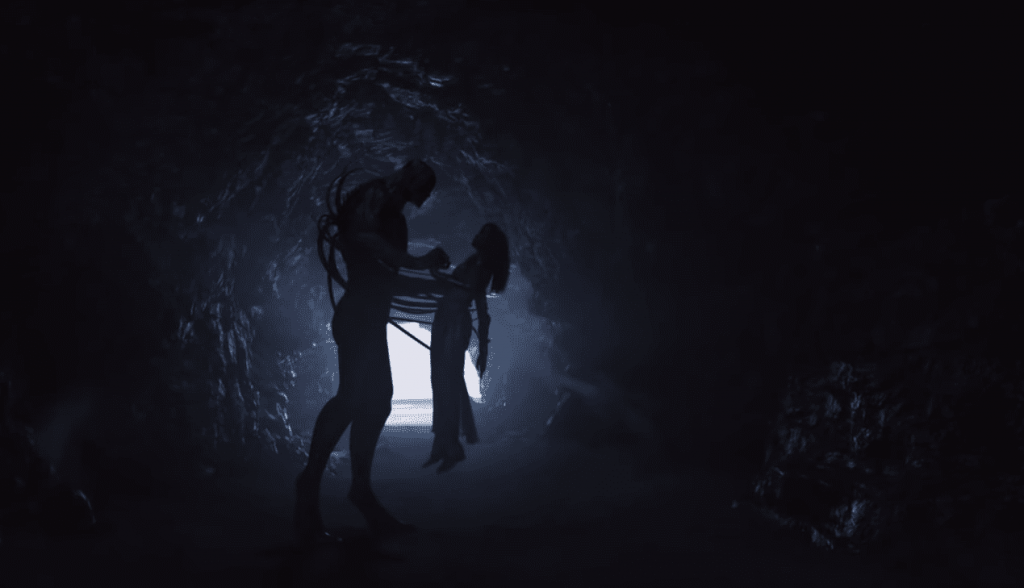 So, what made so many reviewers fall asleep? Or what inspired them to claim they fell asleep? Some said it was the runtime, which clocked in at a bit over 2 and a half hours. It’s 21 minutes longer than The Winter Soldier and a lot shorter than Endgame. When people say it was too long, it seems like they’re trying to say they don’t think the length was used well.  Those reviews are usually also the ones that say they didn’t get to know the characters, that there was not enough and too much action, or that it was the “worst marvel movie ever.” Critiques like this point to something other than the quality of a movie, and suggests a predisposition to, at least, view this film through the most uncharitable lenses possible.

In Defense Of Eternals, and What the Negative Reviews Really Say

The really low reviews use a lot of words to say they never started caring about the movie or anything in it. Eternals asks for a different kind of participation than a lot of Marvel movies. The MCU is really good at giving us exactly enough information to like something. Eternals couldn’t possibly show the entire story, so it gave us the start, character details through flashback scenes, and the end. We were left to recognize that more stuff happened. That is subtly alluded to when literally every character is constantly saying stuff like “this happened at this place hundreds of years ago and it totally sucked” because you can tell a story without walking people through it.

There are valid criticisms of Eternals, but a lot of the low reviews seemed like people who just got mad that they didn’t connect with a movie they felt like should have been made for them. It had to ask the audience to fill in 7000 years of story, and that didn’t resonate with everyone.  There’s nothing inherently boring or missing from the movie, it just had a different feel to it because it was basically the MCU’s Silmarillion. If anything, the biggest defense of Eternals will be in how it ages. I’m predicting it will be like Age of Ultron. As the phase goes on, we’ll be able to see the long-reaching effects opening up the Marvel cosmos has, and that at the very least wake up some of these sleepy reviewers long enough to learn if there will be an Eternals 2.

You could be streaming Eternals at home in Its IMAX Aspect Ratio on Disney+ right now!

Have you had a chance to stream Eternals at home? What did you think of it on your first or second watch? Tell us in the comments, even if you disagree with our take!