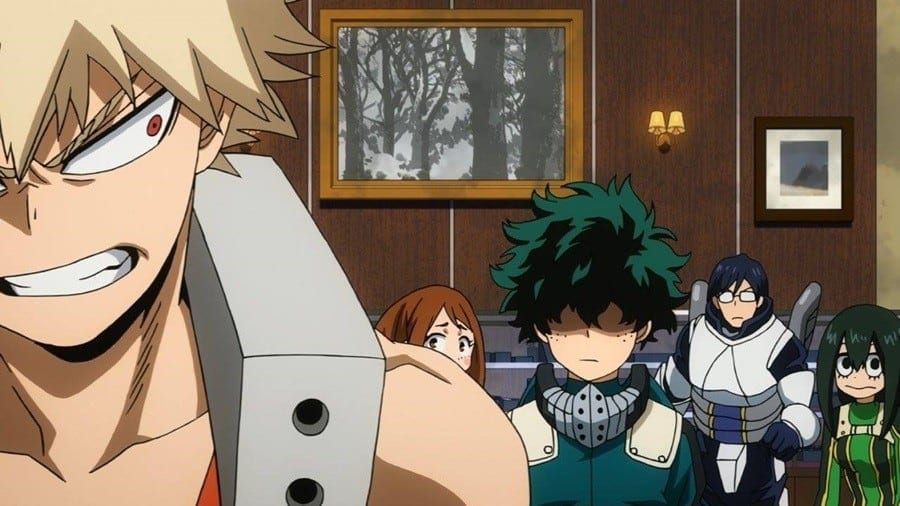 My Hero Academia is a very popular anime right now ( click here for an introduction). The series pits heroes with “quirks” against villains with similar powers in a struggle for good and evil. Funimation released a new trailer for the fourth season of the show, fully dubbed into English. A lot of anime fans don’t love dubs, preferring the Japenese originals. Like Attack on Titan and other popular mainstream anime, dubs are important. They bring in new audiences, and My Hero Academia certainly brought fans over who only watch in English. A new trailer debuted at Comic-Con for My Hero Academia Season Four. If the trailer is like the next season, it’s going to be another great one.

What’s in the Comic-Con My Hero Academia Season Four Trailer?

In the trailer debuted at Comic-Con, we see brief glimpses of new cast members. The season is going to follow the “Shie Hassaikai” plot from the manga, for those who read as well as watch. In the story, Overhaul is running wild. The villain is germaphobic, dangerous, and ready to get rid of all quirks forever. Overhaul is the season’s primary villain, and is going to ask a lot of the heroes we’ve watched for three seasons.

Where is Deku in Season Four of My Hero Academia?

Deku is working closely with yet another mentor. After getting his powers from All-Might, the young trainee worked with Gran Torino, the man who gave All-Might his powers. Now, he’s working with former All-Might sidekick Sir Nighteye. At the end of season three, we saw Deku investigate where this former friend was. Towards the end of season three, we also saw some upperclassman at UA get introduced. The Big Three whooped the first year hero trainees like nobody’s business. The trio is more powerful than any students at UA High, so it’ll be interesting to see if they provide help or competition to Deku and his classmates.

We’re going to get a lot more time with Eijiro Kirishima as well. He’s a member of Class 1-A, making him very ready to step out in a big way. He hasn’t necessarily been a big focus as of yet. Nevertheless, he’s been present in every major battle and storyline of the show so far.

The panel at Comic-Con focused a lot on the success of the show. It’s widely popular, making it a much anticipated program for anime fans. It’s reached huge heights internationally, and is certainly one of the biggest shows out now. The third season won acclaim in 2018, and season four is ready to keep the ball rolling. Crunchyroll is yet to announce a simultaneous airing of the dubs, but the first three seasons got this treatment. In Japan, some shows air before they come out in dubs, but this likely won’t happen with My Hero Academia season four.

When Does My Hero Academia Season Four Debut?

The fourth season of My Hero Academia is going to premier on October 12th of this year. We’ll be following the show closely, so keep reading Comic Years for more on the popular anime. This week, we’re also covering everything Comic-Con, so keep reading often all throughout the events in San Diego!