Anakin Skywalker (And His Clone Wars Voice Actor) Is Returning

On the heels of learning that Hayden Christensen will be part of the cast of the Obi Wan Kenobi live-action series, we get some more exciting Anakin-related news. Matt Lanter, the voice actor for Anakin Skywalker in the Clone Wars animated series, will be returning to reprise the role in some as-yet unnamed project for Lucasfilm Animation. Lanter played Anakin since the 2008 animated feature The Clone Wars. He’s also known for playing Wyatt on NBC’s Timeless. He played that hapless Republic Guard in the first season episode of The Mandalorian where Mando, Natalie Tena, Clancy Brown, Bill Burr, and Richard Ayoade broke into a prison. We know we’ll see Anakin in animation again. Lanter openly stated that he has “been part of some things can’t talk about yet. You’ll see Anakin again,” which is about as forthright as anyone has ever been about upcoming Star Wars projects.

Lanter says he “never quite put Anakin down,” which is an exciting sentiment he shares with Obi Wan. Whether this means we’ll see more of Anakin’s journey where The Clone Wars left off, where his arc ended in Revenge of the Sith, or if it will intersect with The Bad Batch remains to be seen, but it’s exciting to hear that Lanter is as attached to the character as we all are.

The Clone Wars premiered only 3 years after Revenge of the Sith and built so much on the framework the prequel trilogy established. While the prequels have been validly critiqued, the characters they built were fascinating to follow, and the animated series built on them beautifully. After the seventh season concluded, it was obvious there was more left for Anakin to do, even if that “more” was to finish carrying out Order 66 and become a scourge to the galaxy.

How Anakin Skywalker Might Be Returning And Which Voice Actor Will We Get?

The Clone Wars gave us so much development for the prequel Star Wars universe, that one of the exciting things is how many places Anakin Skywalker (and Lanter as his voice actor) returning could go. We’ve already seen a wiser Ahsoka Tano appear in The Mandalorian season two, but when she faced Darth Vader in Star Wars: Rebels the voice actor for that was a guy we think is worth watching named (checks notes) James Earl Jones. (Though, Lanter did return to record a single line heard when Ahsoka damaged his mask.)

There is also the possibility that, though Anakin is returning with the same voice actor, he won’t have the same focal point he did in Clone Wars. One of the most memorable parts of Rogue One was Vader’s brief appearance, and getting that level of menace in an animated series would be as emotional as it is awesome. We already got a taste of it in the series finale of The Clone Wars, and the prospect of Darth Vader returning in a similar fearful capacity is appealing. It will be interesting if we get something with both Lanter and Jones voicing both sides of the chosen one. 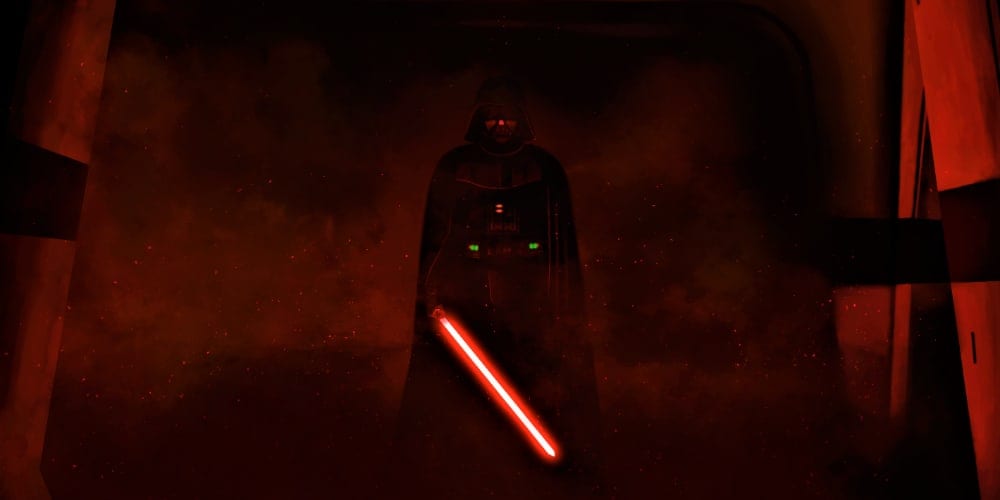 Image via Rogue One: A Star Wars Story

We also know there is a wide, extended universe worth of stories that aren’t canon anymore, and Disney seems intent on sifting through them and pulling in some of the fan favorite characters and plotlines. Maybe we’ll see some of Vader’s extended dealings with the Jedi remnants scattered across the galaxy, or maybe he’ll just be a force of menace and fear for the main characters in another series. Whatever way it goes, we’re excited to see Lanter is returning to the role.

You can catch up with the Star Universe in The Bad Batch premiering on Disney+ May 4, 2021.

What do you think? Are you excited that Anakin Skywalker is returning with his The Clone Wars voice actor? What story do you think they are going to tell? Let us know in the comments below, but make sure you have the high ground first.