The Finale of Sci-Fi comedy podcast from Kelly&Kelly | CY 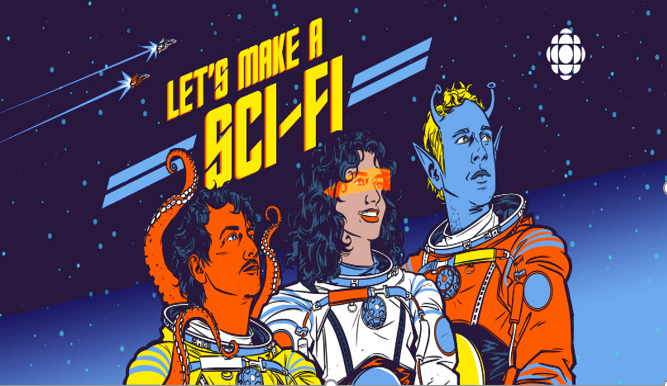 “Progeny” is the cumulation of seven episodes of trial and error by Beil, Kelly and Chavez as they attempt to create an original, and serious, science-fiction pilot, with guidance from industry experts—including astrophysicist Neil deGrasse Tyson, District 9 writer-director Neill Blomkamp, and Star Wars: The Clone Wars producer Catherine Winder—on topics including world building, dynamic characters, and social commentary.

With an eight-week deadline to write a genuine TV pilot, Let’s Make A Sci-Fi brings the best of competitive reality shows to comedy podcasts. But though Beil, Kelly, and Chavez are trying to pen the best possible script, Let’s Make A Sci-Fi celebrates the creative process as much as creative successes. In a bonus episode (ep 8), also available on April 12, the hosts listen to the audio drama and reflect on what worked, what didn’t, and what was the most embarrassing.

“It’s an exciting, different format from other comedy podcasts,” says Chris Kelly, Kelly&Kelly’s Creative Director. “Our hope is that listeners fall in love with two amazing shows simultaneously —the fun adventure through the creative process and the entirely new sci-fi story they get to experience our co-hosts create from scratch. There’s a real finished pilot script, which is already being pitched to TV, but the hard work, gags, and even failures within the writing process are just as compelling—and makes hearing the finished script that much more rewarding.”

“CBC Podcasts worked with Kelly&Kelly in 2020 on a number of different series ideas, and we were drawn to Let’s Make a Sci-Fi due to its fresh and inventive concept,” said Arif Noorani, Director, CBC Podcasts. “The series taps into the huge fandom around the science-fiction genre, while peeling back the curtain on how it’s made. Ryan, Maddy and Mark are charming and funny but also serious about their mission, the perfect hosts for this intergalactic journey. We can’t wait to share the finished pilot script with podcast listeners and sci-fi fans.”

Kelly&Kelly want to bring this docu-series format to other genres, with an eye to tackle romcoms next. “We see a lot of potential to take this structure into even bigger, more ambitious challenges. Let’s Make A Romcom, Let’s Make A Horror, Let’s Make A Western, but also Let’s Make A Sports Team or even Let’s Make A City! We’d love to test the limits of what this format can do,” says Kelly.

On April 12, Let’s Make A Sci-Fi reveals its highly anticipated script and audiences will be able to judge the outcome.  Did the comedians write a legitimate sci-fi? Definitely. Is it any good? Still to be determined.  Either way, Let’s Make A Sci-Fi has shown that the creative process can be just as fun as the interstellar destination.

Kelly&Kelly is a Webby award-winning studio in Vancouver, BC. They are known for creating This Sounds Serious (“Best Podcast of 2020” – The New Yorker) and CBC’s This Is That. They also produced Unqualified with Anna Faris, Celeste & Her Best (with Celeste Barber), and Dark Air with Terry Carnation (with Rainn Wilson).

From Canada’s public broadcaster, CBC Podcasts is a richly diverse collection of award-winning podcasts that engage, enlighten and entertain. CBC is the #1 podcaster in Canada, reaching more Canadians than any other podcast publisher with millions of downloads each month and more than 40 series in genres such as true crime, comedy, human interest and audio fiction.