Who Is Korg in Marvel Comics? The Kronan Warrior

Who Is Korg in Marvel, The Kronan Warrior From Thor: Love And Thunder? 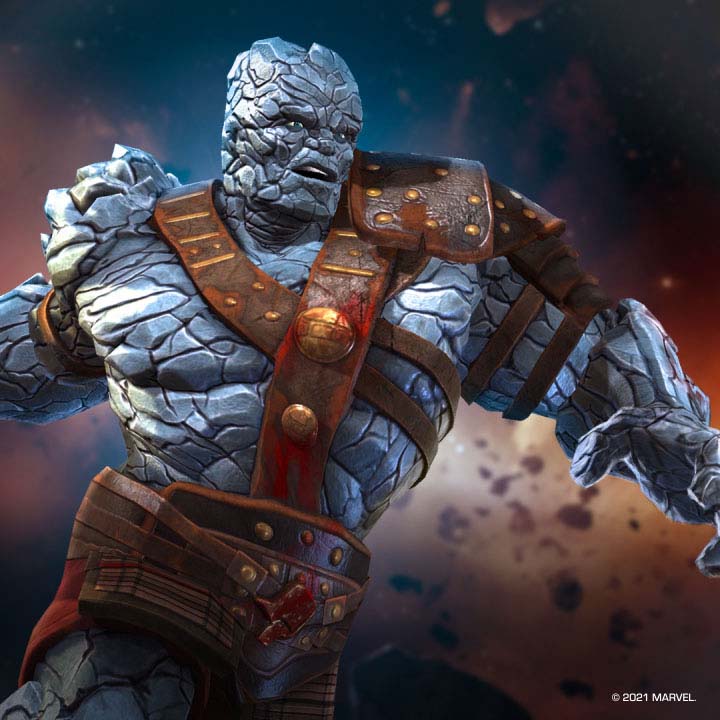 Korg will likely help Thor fight the evil that stalks the Earth again. You surely remember who this character is, the rock made being in the gladiator prison in Thor: Ragnarok. Even though his strength is not as outstanding as other characters, he always serves as a support and helps others. We will see him back in the new sequel Thor: Love and Thunder. This new movie will show Korg and probably his friend Mick fighting alongside Thor. If you’re wondering who is Korg in Marvel, join us as we tell you more about his story.

Who is Korg in Marvel? 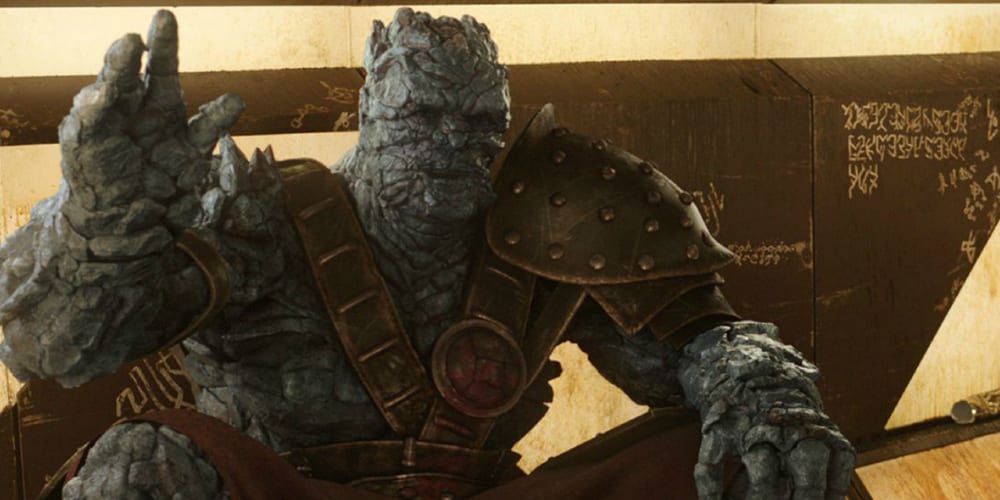 Korg is a Marvel character from the Thor saga who first appeared in cinema in the third film of this franchise. He is a gladiator imprisoned on the planet Sakaar. This character made of rock tried to start a revolution on this planet and eliminate the tyranny, but no one, apart from his mother and her boyfriend, attended.

Korg has a very docile and friendly personality, likes to help everyone, and has a good sense of justice. He is always looking to start revolutions and fight against evil beings. He is quiet by nature and doesn’t work well as a leader, although he is excellent support for our heroes.

We saw Korg for the first time in prison on the planet of Sakaar when Thor was imprisoned after his fight against Hela. The moment Thor enters the prison, he meets Korg and explains his story about the revolution and how he ended up in jail. Korg also adds that he is not so strong enough, which is why he participates in secondary fights and would never fight the Coliseum’s champion.

Korg warns Thor not to face the Coliseum’s champion because he would end up dead like Doug. Hearing Thor’s refusal and saying he will win the fight, he gives Thor the nickname “New Doug.”

As they prepare for the fight, we see Korg comment about the state of the weapons, stating that they are dirty. He listens to Thor’s story about his hammer, Mjolnir, and how he battled with this weapon and finished off his enemies. The Kronan warrior declares that he can detail a strong relationship between our hero and his weapon. 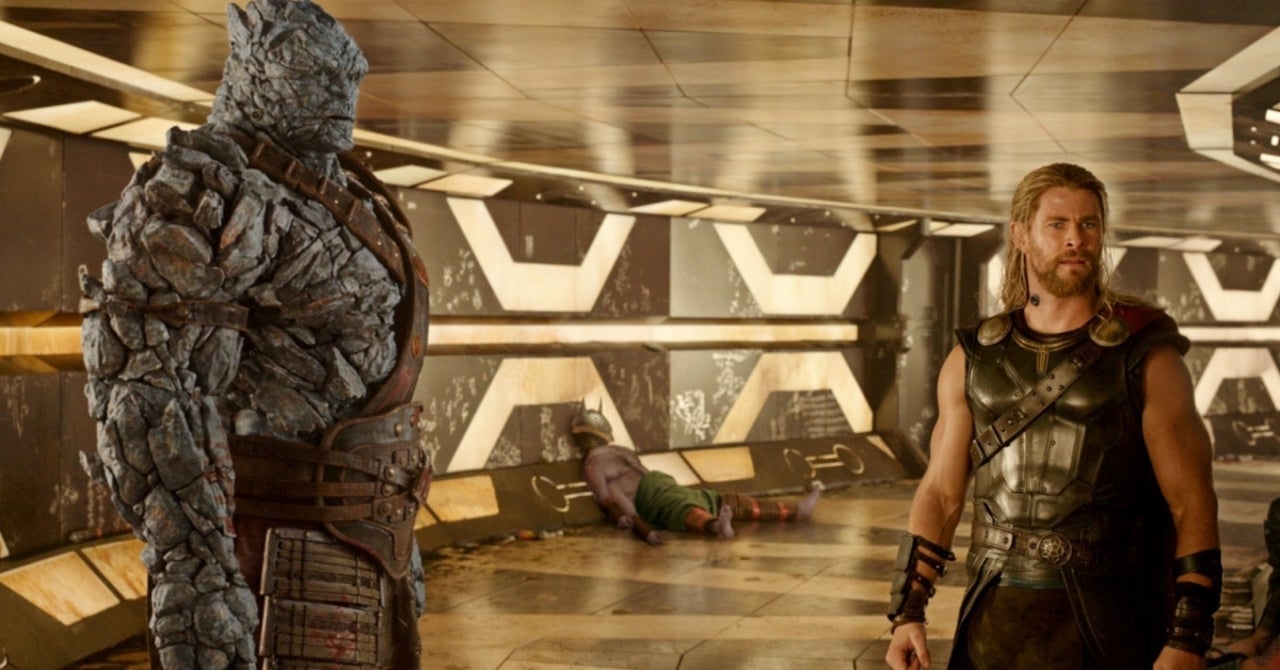 Later Thor enters the scene, reuniting with the Hulk. While this happens, Korg sees the fight between the two, detailing the jolt that the green giant gives the god of thunder. The latter becomes disillusioned with the battle until Thor begins to awaken some of his powers as the God of Thunder.

He watches the fight in amazement, seeing how Thor is winning the battle against the Hulk. However, everything ends when the Coliseum’s owner activates the Norse god’s control to electrocute him. In the end, Thor takes a heavy blow from the Hulk, and Korg declares that he ended up just like Doug.

Then we meet the Kronan warrior when the Valkyrie hands the weapons to him and the rest of the prisoners. He declares that they began a new revolution and started a process, wiping out the army of the planet’s ruler. Then he freed Loki, who was paralyzed by the controller that Thor had hit him, and together with him, embarks on a mission to save Asgard.

Upon arriving in Asgard, Korg helps the citizens of Asgard flee following Hela’s attack on the town. Korg helps Heimdall and the rest of the Asgardians up and shoots the undead controlled by the Goddess of Death. He finishes pulling each person up and proceeds to flee with the heroes, following Surtur’s awakening in Asgard.

Korg returns as the fire titan delivers the coup de grace to Asgard, seeing the scene declaring, “If the foundations are strong it can be rebuilt again.” This feeling is until the planet explodes, and he apologizes, saying there are no more foundations. He heads to Earth with Thor. However, they did not arrive as they wanted, as Thanos intercepted them.

Thanos invades Thor’s ship and eliminates half of the citizens of Asgard. Korg escapes with some citizens in escape pods from the ship, heading to Earth.

After Thor kills Thanos, half the people in the universe are wiped out. We see Korg and the rest of the citizens of Asgard living in a region of Earth, which they call New Asgard. Rocket and Hulk go to talk to Thor, asking Korg about Thor, who tells them that they should not name Thanos in front of the God of Thunder.

Korg clarifies to them that Thor is in his house, pointing out that the Nordic God is susceptible to the subject with the Titan. Rocket and Smart Hulk talk to Thor, asking for help to solve the situation caused by Thanos, explaining that they can reverse the disappearance of half of the people on Earth. 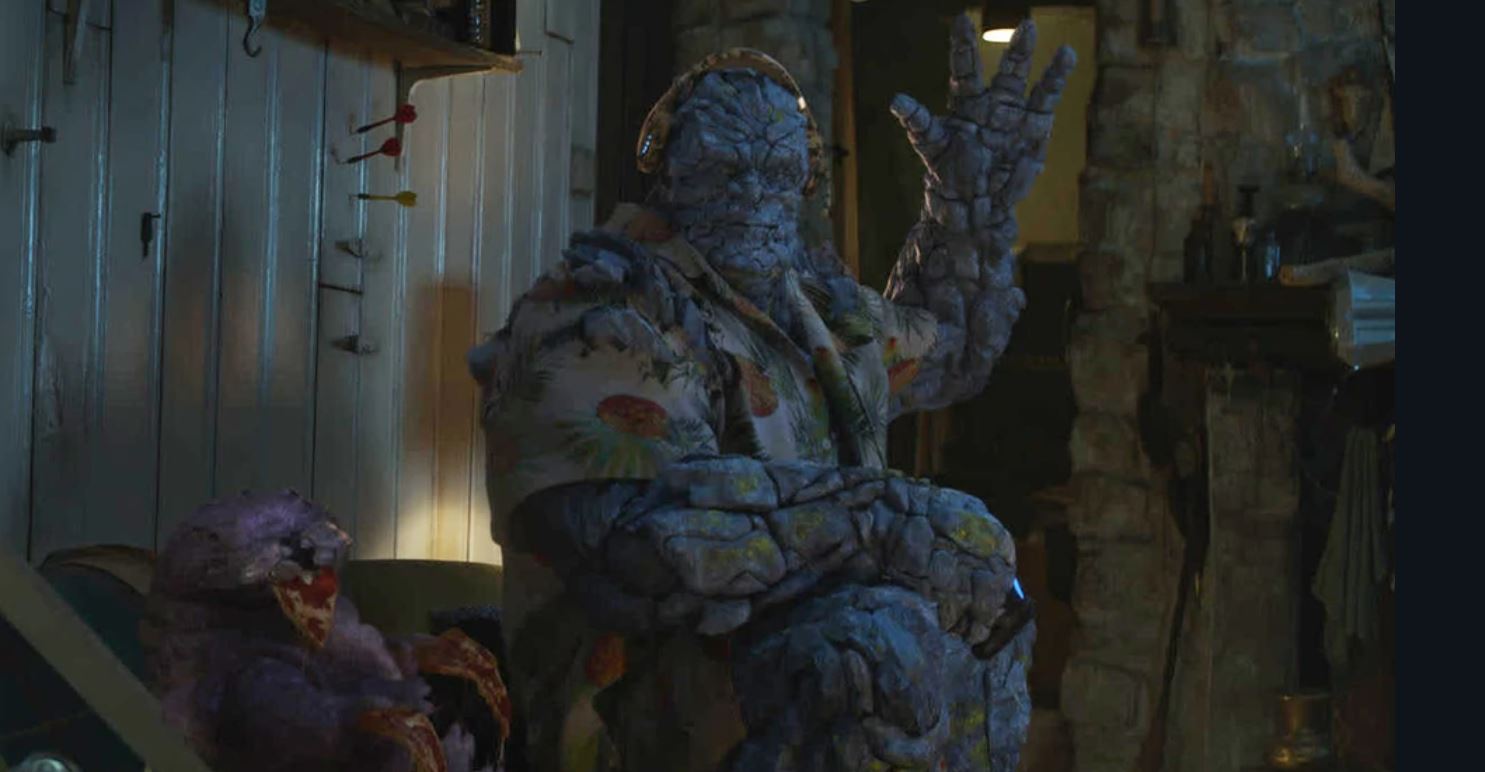 Despite many complaints from the God of Thunder, he accepts and ventures back with the avengers to search for the infinity stones, traveling through time. He says goodbye to Korg and the rest of the Asgardians, leaving New Asgard.

We see Korg again in the final battle against Thanos when the Titan and his army shoot down Captain America, Thor, and the rest of the heroes. The Kronan warrior appeared along with the whole armada of heroes, such as the wizards, the Valkyrie, and Pepper Potts.

The character fights against Thanos’ army, being hit several times by one of Titan’s adopted sons. He battles with the soldiers until he is covered by gunfire from the invader’s ship. He appears when the fight ends and all the enemies disappear, thanks to Iron Man’s sacrifice.

Powers and Abilities of Korg in Marvel

Korg’s powers and abilities are superhuman strength, although no match for Thor, Captain America, or the Hulk. He has excellent resistance to blows due to his rocky body. He is somewhat similar to the character of the Mole from the Fantastic Four, with super strength and toughness. Korg has the possibility of living a long life due to the components that make up his body.

The armament he has depends mainly on where you find him. If you see him in the Coliseum in the movie Thor Ragnarok he uses an ax to battle in his fights. After that, he uses the submachine gun Valkyrie gave him to escape and start the rebellion on Sakaar.

From then on, he always used that weapon to fight against Hela’s army and Thanos’ soldiers.

Like a Marvel character and secondary character of Thor, Avengers, and other universe productions, Korg has had a significant presence in comics and movies. He has appeared in Thor’s universe and in the various crossovers that the God of Thunder has had with other characters, such as the Avengers.

Who is Korg in Marvel Comics This character has appeared in several Marvel comics, starting with Planet Hulk. In this, we see how Korg meets the Hulk and, together with him, five more gladiators try to escape and leave the Red King’s planet. Korg is revealed against the dictator after the Silver Surfer destroys with his cosmic powers the disks that controlled them.

They escape from the planet, and after many adventures, they arrive on Earth. They live incredible experiences, such as their confrontation with the Wonder Man, to which he was able to give a blow. Then they surrender to Shield when they learn that one of their allies, Miek caused the outbreak of the Sakaar. This fight ends when Korg and Hulk surrender and are taken into SHIELD custody.

Another comic in which this character appears is World War Hulk: Frontline. In this one, he is a detective investigating the Arch-E-5912 death. During most of the story, he avoids his greatest fear; however, it finally haunts him, and he has to face it at the end of the comic. This character’s greatest fear is facing Thor. 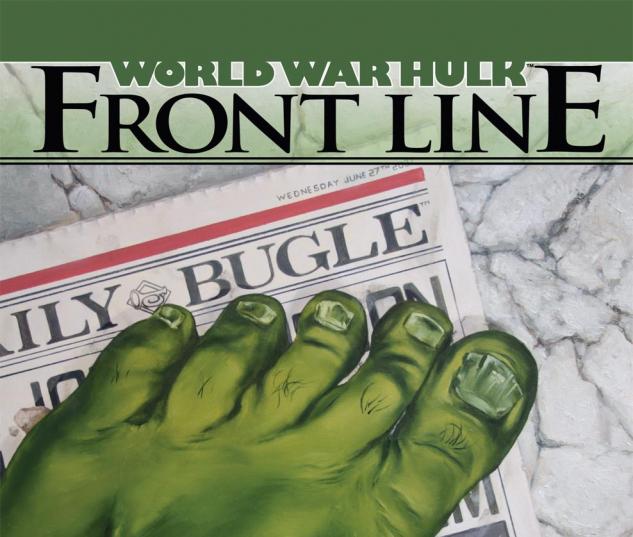 Another comic that appears is War of Chao. He faces several enemies with the Hulk. We can see Hulk’s enemy Abomination, resurrected in abnormal conditions. We can also see that they fight with a group called Amatsu-Mikaboshi. Also, both acquaintances must confront them—awakening mixed feelings in both.

Finally, we have an appearance in the comic Civil War II. In this story, we can see Korg learning of the death of Bruce Banner and the Hulk. He goes to the funeral and declares that Hulk always told him he wanted to be alone.

This character has appeared in some television series of the Marvel Universe. The first in which we see him is in The Super Hero Squad Show (2009). He appears in a Planet Hulk episode when the Hulk is sent to the Coliseum, where Korg is held captive.

Another remarkable appearance of Korg is in Hulk and the Agents of S.M.A.S.H (2013). Throughout the episodes of this series, we see the different versions of Hulk go to Sakaar, finding Korg as a slave of the Leader. In this opportunity, Red Hulk convinces the rest of the team to help him and the rest of the enslaved people to free themselves from the dictator of Sakaar.

Who is Korg In Marvel Movies

In the cinema we can see them in several opportunities, starting with Thor 3 or Thor: Ragnarok. The movie shows him in the Coliseum, where both the Hulk and Thor are held captive. He advises Thor on how to survive in the Coliseum, although Thor does not pay much attention to him.

When they escape from the Coliseum, he also appears when Valkyrie gives him the weapons to run. Then they help Loki to save Thor and the citizens of Asgard from the hands of the Goddess of Death, Hela.

This character appears again in The Avengers: End Game when Rocket and Smart Hulk go to look for Thor. Thor makes it clear to them that it is forbidden to talk about what happened against Thanos and that Thor is not the same. Later, he appears when Doctor Strange makes all the heroes appear before Thanos’ army to start the last battle against him. 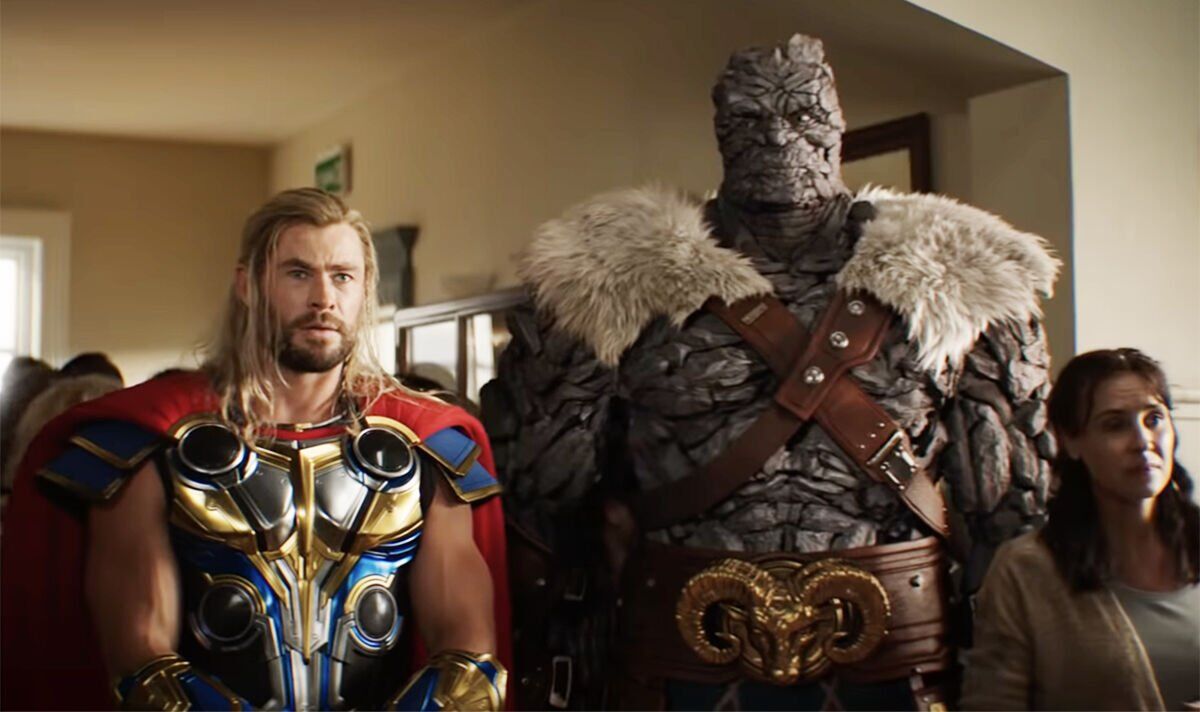 He will show up in the new Thor sequel, where he will support the God of Thunder to defeat the new villain, Gorr the God Butcher. As we saw in the trailer, Korg appears to be telling the story of Thor to a group of children. This scene will probably be a succession of flashbacks that will put us in a situation to see the God of Thunder’s new adventures.

This character possesses super strength, stamina, and the spirit to help. In the movies, he has appeared in the Thor universe. However, we can see that Korg belongs more prominence in the Hulk world. The Kronan warrior arose in comics and animated series connected to the green man. It is curious to see how Marvel Studios decided to place Korg as Thor’s loyal buddy when he was terrified of the God of Thunder in the comics.

This character is quite beloved for his unique, kind, helpful, and fair personality. However, he has not had such prominence in the films in which he has appeared. It is possible that due to the support of the public, he will have greater participation in Thor: Love and Thunder.