The Pale Blue Eye Movie - What Happened At The End?

The Pale Blue Eye Movie – What Happened At The End? Recently, Netflix released its latest film, titled The Pale Blue Eye. Scott Cooper directed it, while Christian Bale and Harry Melling starred in the movie. The film features Augustus Landor and Edgar Allen Poe working together to find the truth behind a mystery. After a few red herrings and many suspense moments, the ending finally reveals what really happened. But what on earth did it mean? Keep reading to explore the meaning of the film’s ending. Naturally, there are huge spoilers ahead!

Christian Bale plays Augustus Landor in the film, and Harry Mellin plays Edgar Allen Poe. At the film’s start, Augustus investigates the sudden, gruesome deaths of numerous soldiers. Later, his daughter Mattie, played by Hadley Robinson, also disappears. Nobody seems to realize the events are connected, apart from Poe. Initially, everyone believed a local family participated in a ritual and killed the soldiers. However, Poe ruminates on what happened and eventually realizes that’s not the case, later speaking to Augustus about it.

It turns out that the soldiers had assaulted Mattie, who later killed herself in front of Augustus. Naturally, this led to Augustus becoming deeply traumatized as he searched for justice for his daughter. So, it later emerges that the investigator in The Pale Blue Eye was also the culprit o the crime!

Later, Augustus and Poe discuss what happened, and Augustus reveals why he never told the truth. According to him, he knew that talking about his daughter’s suicide wouldn’t bring any peace. Through flashbacks, we learn what happened. First, Augustus killed one of the soldiers by hanging him. However, the ritual family later arrived and mutilated his body. As such, this gave Augustus an “extraordinary cover” for the murder and led him to mutilate the other soldiers. Toward the end of The Pale Blue Eye, we learn that Edgar doesn’t want to give Augustus to the authorities. Instead, he wanted to hear the truth from Augustus about what happened. Eventually, Augustus revealed that he tortured each soldier for information, so he could learn about the rest of the gang. Then, he killed them. However, one soldier managed to escape, but Augustus said he didn’t have the strength to go after him. Instead, he hopes the soldier will live in fear for the rest of his life. Clearly, it’s a pretty sad moment, and there’s no hope for the future.

At the end of The Pale Blue Eye, we see Augustus break down into tears. He realizes that, no matter what, he can’t bring back his daughter. Murdering the soldiers didn’t make anything better or bring justice. Augustus will forever feel empty. So, the film’s main message is that justice isn’t always fair, and problems aren’t always resolved. As such, Augustus will stay alone forever.

Thankfully, Poe decides not to give him to the authorities. Later, he visits the place where Mattie killed herself, causing the events of The Pale Blue Eye. Poe holds a ribbon, one of her treasured possessions, and releases it into the wind. At the same time, he says, “rest, my love.”

Naturally, it seems this is a way of releasing her from this world’s pain, or at least he’s trying to. Even though he solved her “murder,” there was no justice for her death. 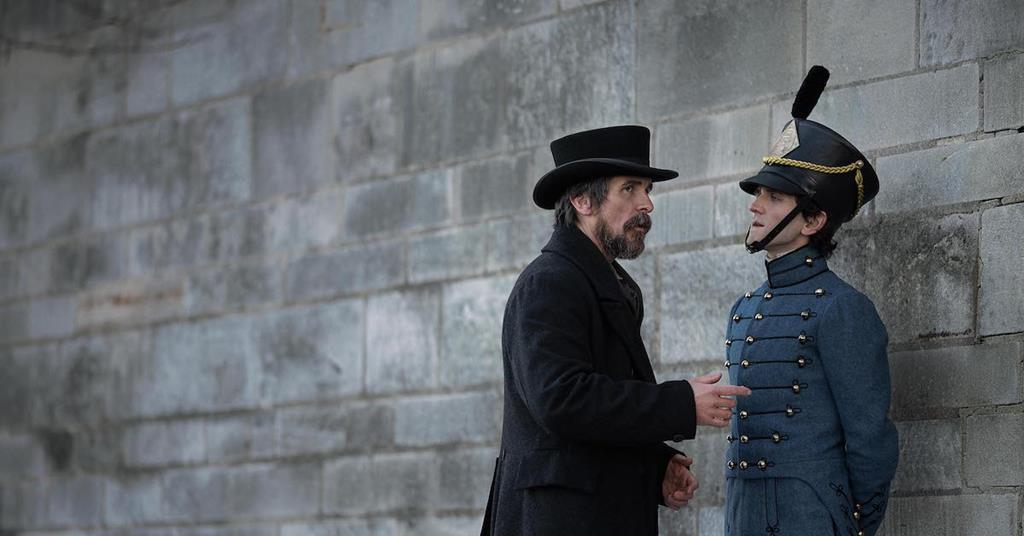 In The Pale Blue Eye, it seems the writers are trying to tell us how bleak this world is. Although we may convince ourselves that justice always prevails, sadly, this isn’t the case. Of course, we can try to take matters into our own hands. But, as Augustus’s actions proved, this doesn’t necessarily lead to a better world either. Clearly, it’s a very dark movie, though it’s not the only one with a message like this.

You can watch the film exclusively now on Netflix.