The hype train for the final film in the Skywalker saga has officially left the station. The new trailer for Star Wars: The Rise of Skywalker was promised to be the last one before the film’s release on December 20. However, diligent fans know that’s only true from a certain point-of-view. There will likely be an international trailer released, usually featuring new footage, around Thanksgiving. There are also going to be oodles of short commercials. The first TV spot with new footage for Star Wars: The Rise of Skywalker is online. Only 30 seconds long, it unveils a lot of new things about this hotly anticipated film.

The purpose of marketing, of course, is to get people to the theater to see it. While there have been reports that this film is tracking to open lower than its predecessor, that’s not the full story. Despite the vocal minority of fans who disliked Episode VIII, The Last Jedi’s more than $1.3 billion box office tracks, relatively speaking, with the middle sags of the previous two trilogies. The final instalment usually ticks upwards in terms of grosses. Though the first film in each trilogy, thus far, is always the one that grosses the most.

Since this movie releases five days before Christmas and has no real blockbuster competition following it, it will do quite well. Still, as they chase a profit, expect more than just one TV spot for Star Wars: The Rise of Skywalker with new footage to come. (Also, the last time John Williams scores a Star Wars film!)

New Footage in the Star Wars: The Rise of Skywalker First TV Spot 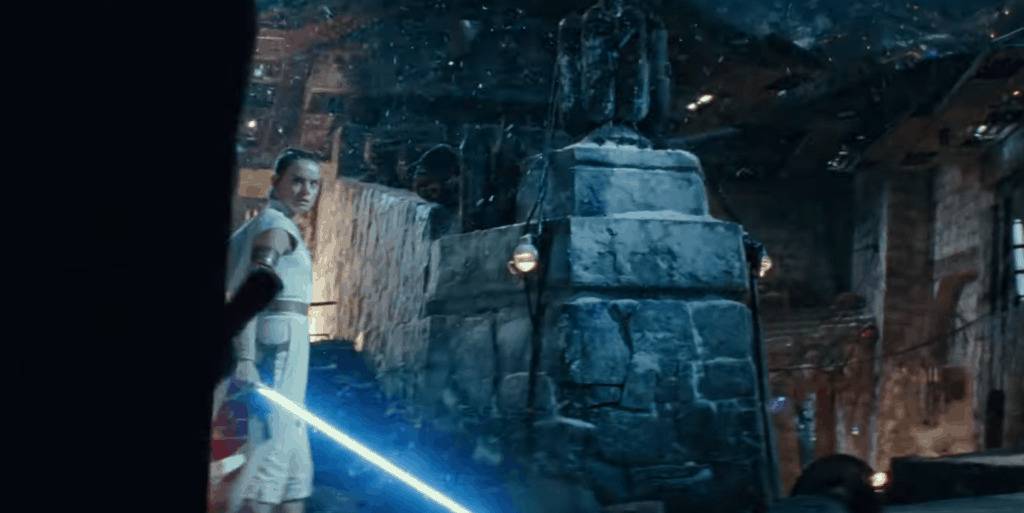 The biggest answer we get in the new footage in the first TV spot for Star Wars: The Rise of Skywalker is about Darth Vader. We see an earlier moment of the scene where Rey and Kylo Ren meet in a white room where the latter keeps the burnt-out mask of Darth Vader. He spoke to it in The Force Awakens, and that lest vestige of the original villain of the saga will be destroyed. Of course, one has to wonder if anything related to Anakin Skywalker will show up in the film. Other than his repaired lightsaber, of course. We also get a glimpse of Kylo Ren in his repaired mask, seemingly from the same sequence.

We also see more of the desert planet that looks like Tatooine but is actually called Kijimi. Along with jet-pack-wearing First Order stormtroopers, others appear to have wheeled vehicles that look the Batpod from The Dark Knight. We also see Rey and Kylo squaring off on what appears to be the streets of what could possibly be that iceberg-looking planet(?) we saw in the last trailer.

Finally, there is another piece of amazing Jedi ability from Rey. Standing in the hangar of a First Order ship, she takes a flying leap almost into space. Luckily Finn waits on the open gangplank of the Millennium Falcon. The engines blow everyone away, but Kylo Ren stands his ground.

Are you impressed with the new footage in the first TV spot for Star Wars: The Rise of Skywalker? Tell us if there were any details or hints that we missed in the comments below.

Movies
Black Adam’s Superman Cameo Would Be Disappointing (RUMOR)
Captain Marvel 2: New Actress Joins The Cast
Movies
Minions: The Rise of Gru Soars To $202 million at the box office
Movies
The Way of Water director wants it to be as big as The Lord of the Rings
Pop Culture
Taron Egerton As Wolverine – Actor Confirms Meeting With Kevin Feige
Pop Culture
Nintendo Says Fans Who Want Sequels Are Hard To Please While Working On New Games