Home » Movies » The New Spider-Man: No Way Home Trailer Is Here, And So Are Some Old Friends

The New Spider-Man: No Way Home Trailer Is Here, And So Are Some Old Friends

What the New Trailer Tells Us About Spider-Man: No Way Home

Peter must have done a lot of souvenir shopping during Far From Home because there’s a lot to unpack now that he’s back in New York. The trailer starts off with a voiceover from Peter talking about how brutal his life has been. He’s miserable, which is about 50% of what goes into any Spider-Man. There’s some exposition by Dr. Strange. Peter talked so much he destroyed the fabric of reality. Standard Spider-Man stuff. That’s when the “visitors” start appearing.

Then it’s the scene from the teaser with the pumpkin bomb rolling onto The Bridge and Willem DaFoe’s incredible laugh. No Way Home built so much punishing anticipation by showing this scene in the teaser and then giving us nothing but a poster (and a ton of leaks.) One botched spell and the fragile universe is tearing open and villains from every universe are coming in.

The Gang is (Almost) All Here

No Way Home is bringing back villains from 5 different Spider-Man movies from two other franchises. This trailer confirmed what everyone has been saying pretty much since the day the teaser dropped and people saw yellow lightning in the poster. Doctor Octopus, Green Goblin, The Lizard, Electro, and Sandman are back. It’s the Sinister… 5.

The marketing for No Way Home has done its very best to leave some questions unanswered. The problem is that it did that by leaving 3 perfectly-shaped holes that are so clearly cut around so we kind of already know what’s coming. There are a few contenders for who the 6th villain is going to be, but there’s definitely going to be a 6th one. You don’t just pull in 5 members of the Sinister Six and leave it at that. The Fearful Five doesn’t have the bite. There’s a possibility it’ll be Venom from one universe or another, or they’ll make my dreams come true and resurrect Dr. Octavia from Spiderverse to be the much cooler counterpart to Doctor Octopus, even if he just stole some of Peter’s nanobots and gave his arms a new paintjob. It also kind of looks like the Green Goblin from the Marc Webb movies is actually in the trailer, but he’s a bit blurry, possibly because he knows he can’t live up to DaFoe. The unconfirmed last villain isn’t the only gap though. 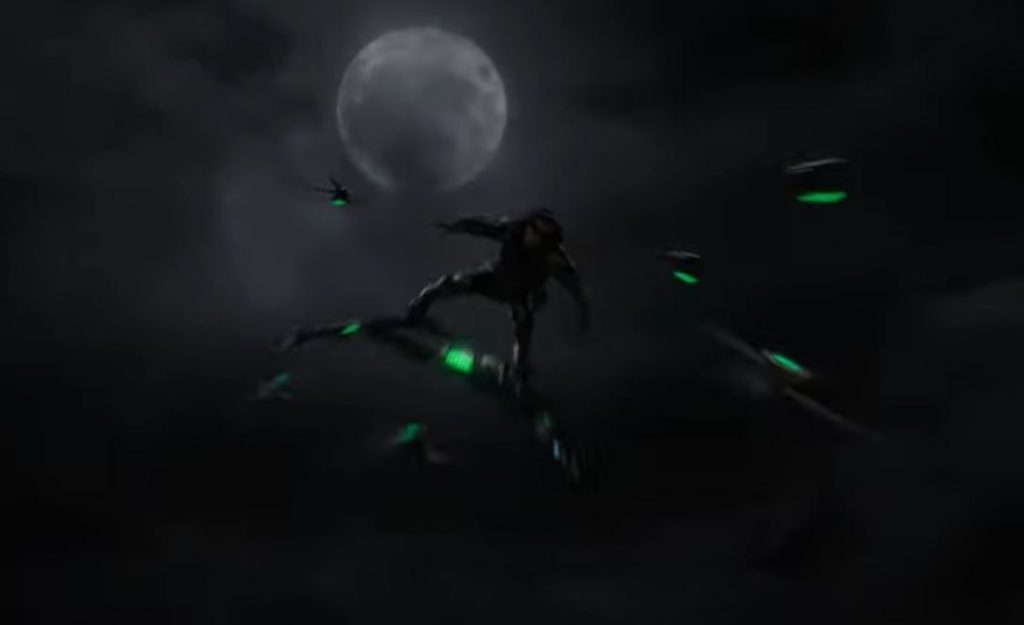 What’s a Spiderverse Without The Spiders?

The new Spider-Man: No Way Home trailer finally took us off The Bridge. Doctor Octopus gets razzed in what looks like a subway tunnel. Electro T-Poses near some power lines and rocks the perfect electrified version of his mask from the comics. Sandman does his best impression of the Mummy from The Mummy.  And MJ looks like she’s getting Gwen Stacied as we get a lingering shot of her falling from some scaffolding with Peter just barely too slow to save her. Another shot shows Doctor Strange struggling to hold something from tearing through the fabric of the universe, even though all the villains are already present and accounted for in that scene. All this combines to make a few perfect cookie cutters in the shape of the most anticipated and worst kept secret of this movie. The other Spider-Men are here. They’re just not in the trailer.

It’s all but confirmed that Andrew Garfield and Tobey Maguire are going to be in the new Spider-Man. There’s been all this talk, even from Tom Holland, about a mystery character, but it’s all but settled who that could be. Or at the least the type of person it probably is. Ignoring the leaked images that gain more and more credibility as we see the exact setting the leaks supposedly captured. Ignoring the coy comments from Spider-Men past when they’re asked if they’d ever reprise their role. Ignoring all that, the entire cast of villains comes from other movies. It would be so weird to pull dead villains from the other universes and not pull out their potentially living Spidery counterparts.

The trailer ends on the top of the Statue of Liberty, with Doctor Strange failing to stop the probably-Spider-Men from breaking into their universe to duke it out with the ghosts of their slain nemeses. Spider-Man: No Way Home comes out in a month, and that’s a long time for some of these unanswered questions.

There’s a lot here, and we all need some time to really process it, but there are a few big things we can’t ignore. First, is the 6th villain actually just a second Goblin? That would be such a chaotic power movie after the ending of Let There Be Carnage put Venom in the same universe as Spider-Man. It would also be brilliant misdirection to have this actually be a play for the Sinister Twelve, but that seems a little crowded. But if it gives us a chance to have Michael Keaton’s Vulture back, I’m so down.

Second, all the ingredients are there for Matt Murdock’s Daredevil to appear. Spider-Man needs a lawyer, and who better to help him than the guy who’s already in the neighborhood, already in the MCU, and has the only eyewear as cool as Spider-Man.

All in all, looks like it might be the best 3rd installment Spider-Man has had, though the competition is either incredibly contentious or totally nonexistent. It still looks rad, and we only have to wait a month before it’s here.