Home » Movies » Minions: The Rise of Gru Soars To $202 million at the box office Universal/Minions: Illumination’s Minions: The Rise Of Gru pushed to a $87.2M weekend at the international box office. It came in slightly above the estimates acquired on Saturday. The offshore cume now stands at $93.7M, totaling $202.2M globally. The Rise Of Gru, the most recent installment in the biggest animated series in the world, debuted in Australia last weekend and now expanded to 60 additional regions. The debut in the new hubs was $81.5M. The new releases underperform Minions and Despicable Me 3 like-for-like at today’s exchange rates by 23 percent and 13 percent, respectively. Results from Week 2 are tracking 13 percent below Minions and only 3 percent below DM3 with Australia included. Italy, Japan, Korea, and France have yet to let the small guys loose.

Minions: The Rise of Gru Did Well In Many Countries

With four territories (Argentina, Saudi Arabia, Israel, and Venezuela) recording the highest animation opening weekend ever and 52 markets setting the best animated premiere of the pandemic, Gru and the crew achieved some new landmarks internationally (see more detail in the breakdowns as they are updated below for all films).A comprehensive global marketing effort by Universal featured pop-up shops, performances at music festivals, mall takeovers, and a smart TikTok “Minions In Suits” challenge that quickly gained popularity. The UK ($12.9M), Mexico ($12.4M), Germany ($4.8M), Spain ($3.6M), and Indonesia ($3.4M) were the Top 5 debuts this past weekend.

Veronika Kwan Vandenberg, President of Distribution of Universal Pictures International, says: “We couldn’t be happier for Chris Meledandri, the filmmakers, cast and crew and our partners at Illumination. This result is testament to the enduring love for this franchise, the exceptional film they have delivered and the enormous collaboration between Illumination, our Universal teams around the world and our partners in exhibition.”

Overall, the market is healthy, and it’s encouraging to see so many expensive films from many genres coexisting together. For instance, Paramount/supersonic Skydance’s Top Gun: Maverick, – which already passed $900 million – crossed the $1.1 billion global barrier with additional sales of $37 million in 65 locations, representing a remarkable 16 percent decline from the previous weekend internationally. Through Sunday, the international total was $544.5M.And Universal’s Jurassic World Dominion, the fourth Hollywood film to reach that milestone since the outbreak began, blasted through the $800M mark internationally. It is the third most popular movie worldwide in 2022 with $824.5M. After gaining $26.8M in 72 markets this frame, the offshore cume is now $492.7M.

Warner Bros’ Elvis slipped by just 28% in its sophomore frame for a $15.7M weekend in 57 international markets. The offshore cume to date is $46.2M with global at $113.5M through Sunday. 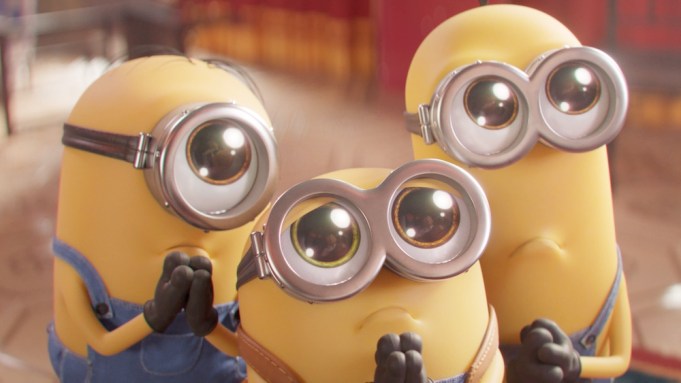 Minions: The Rise of Gru originally broke the Independence Day record for a 4-day debut, reaching almost $128 million. The film’s performance this weekend should serve as a reminder of the importance of the big screen to many executives in the motion picture and streaming industries as well as on Wall Street. Although it may seem obvious, keep in mind that Rise of Gru’s success in this market is supported by a kid’s brand that has produced over $6 billion in retail sales, in addition to a multimillion dollar global marketing effort. And that brand was created using an original motion picture IP from 12 years ago, which hasn’t lost any of its luster. Franchise film streaming doesn’t produce the same kind of outcomes.

True, there are the various Viacom Nick properties, such as Dora the Explorer, South Park, and SpongeBob. However, those are ongoing television series. Advertisers desire to work with global motion picture brands. For Minions: The Rise of Gru, Universal attracted a collection of international partners. They collectively produced the highest media value ever for an Illumination Despicable Me/Minions film at $285M+, according to sources.

What do you think about the success of Minions: The Rise of Gru? Do you consider yourself a fan of the Despicable Me franchise? Do you plan to go see the movie in the theater? Tell us in the comments below!

The Way of Water director wants it to be as big as The Lord of the Rings
Who Is Black Adam? A Look At The Characters In The DC’s Upcoming Black Adam Movie