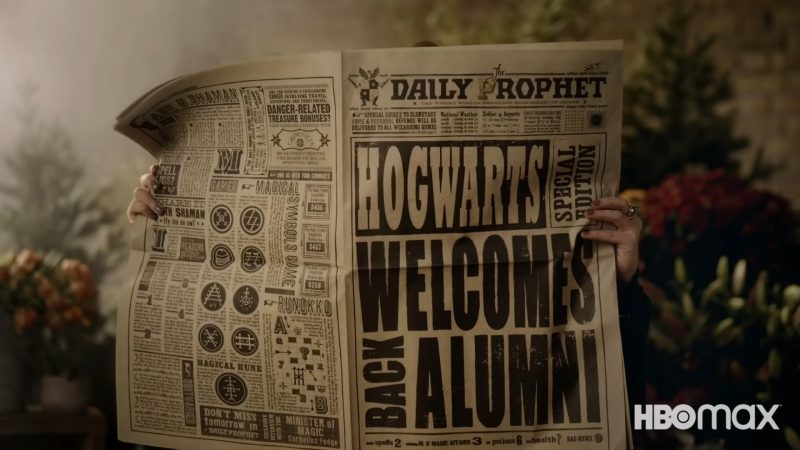 None of the Harry Potter films are explicitly Christmas movies. However, a good half of them just feel like Christmas movies. Pair this magical feeling with the fact that the films are more accessible on streaming services, and you’ve got millions of fans rewatching them for the umpteenth time. (Yes, I am one of them.) So, it’s the perfect time to take everybody back into the Wizarding World. HBO Max has dropped a first look teaser at the Harry Potter 20th Anniversary: Return to Hogwarts special, and we’re all having emotions.

We were pretty upset when our Hogwarts acceptance letters never came in the mail, but this latest teaser proves that it’s never too late to get an invitation to the castle. While brief, the teaser shows off a few familiar faces (including Robbie Coltrane, Matthew Lewis, and Mark Williams.) It also drops some names that are to be expected at the event, which include the Golden Trio, Ralph Fiennes, Gary Oldman, Tom Felton, and more. Filmmaker Chris Columbus will also be present.

The anniversary special is created as a retrospective. While we’ll see our childhood heroes back together again, they won’t be gathering to act in new canon content. Rather, we’ll see in-depth interviews and new cast conversations, and possibly some vintage behind-the-scenes. Overall, we expect something similar to the Friends reunion but with a little bit more magic.

The event was announced last month, and fans were immediately curious to see if the creator of the franchise, J.K. Rowling, would be present. As Comic Years’ KeilinHuang writes in her initial coverage of the news, the author will be absent (aside from potential archival footage.) This news follows previous transphobic comments made by the author.

Harry Potter was a cultural phenomenon that has yet to be repeated. The books have sold more than 500 million copies worldwide, and the first eight films earned nearly $7.75 billion. The merchandise continues to be sold regularly, and folks continue to flock to the Sorting Quiz test online to see what house they belong in. (I’m a proud Slytherin, in case you’re wondering.)

It’s easy to wonder if these reunions are just a cash grab. And while we’re willing to spend a few bucks on a retrospective for something we love, we also feel as if it’s a beautiful tribute to fans. The franchise inspired millions to believe in something magical, taught us about the importance of standing up for those that you love, and also made us fall in love with reading. The films were faithful and entertaining adaptations of the original novels, and we can’t imagine a world without them.

Readers, does the Harry Potter 20th Anniversary Teaser, have you pulling out your old Hogwarts robes from your closet? Let us know what you hope to see in the exciting new special.