Guide To Pirates Of The Caribbean: Curse Of The Black Pearl

Home » Movies » A Guide To Pirates Of The Caribbean: Curse Of The Black Pearl, The Weird Movie That Launched A Franchise

A Guide To Pirates Of The Caribbean: Curse Of The Black Pearl, The Weird Movie That Launched A Franchise 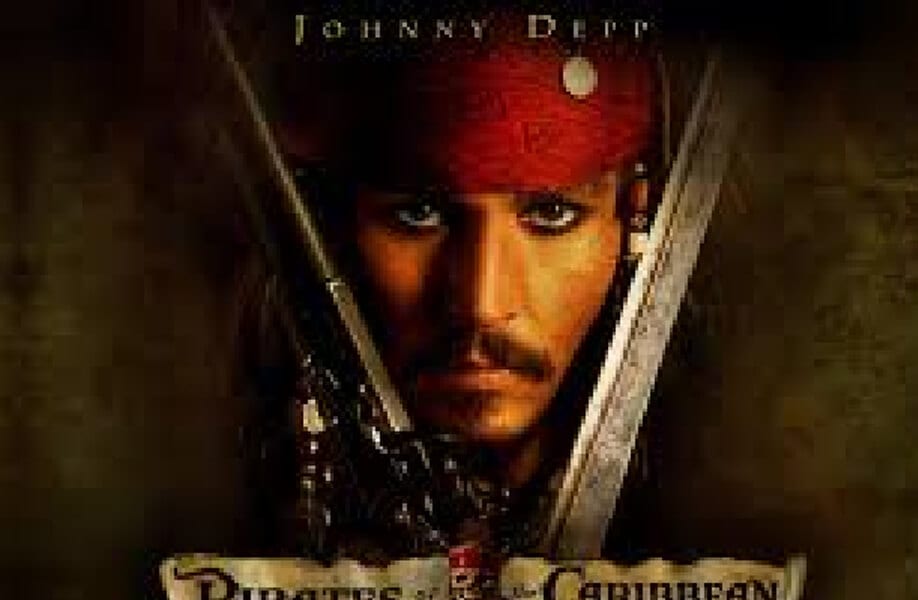 18 years ago, we all started an adventure that continues even now. The year was 2003. Holes was finally getting a video adaptation and Lord of the Rings: The Return of the King was just coming out. Among all that early 2000’s possibility, one more title had drifted its way into our lives. Pirates of the Caribbean was on the scene, ready to draw huge crowds at the box office and cause some really annoying conversations about the different fantasy creatures a pirate could take in a fight. This is your guide to Pirates of the Caribbean: Curse of the Black Pearl, the movie that started it all. Or, as others have put it: the one to blame.

So Much to See

For a movie like Pirates, there’s no real single direction you can start hearing about without inevitably colliding with something else. The film opens at two points. First,  a mysterious ship cleaves through the fog at sea. A child is aboard, and she’s singing an old pirate song. She is not the captain, nor is the man in the stylish hat who talks to her a moment later. His name Mr. Gibbs, and his importance will grow later in the film and plateau for the remainder of every other Pirates film.

The young girl notices a boy floating on a bit of wood exactly like Leo didn’t, has him rescued, and now we have our second series lead. The girl, Elizabeth Swann, robs the unconscious body of the child Will Turner. She takes from him a pointy gold coin on a chain, and as she looks as ir, we get a brief look at the haggard Black Pearl sailing in the ruins of England’s finest ships. Time for a time skip. When we land again, an amount of time has passed. Elizabeth and Will are adults now, of indeterminate age but probably somewhere from 19 – 34.

What Drives This Movie?

There are two main engines of movement in the first Pirates of the Caribbean. The innocent and inadvisable love between Elizabeth and Will Turner is one, and it’s a good one. Will Turner is a dedicated himbo, beautiful, helpful, but also the dude broke a candelabra the second we see him and most of his arc throughout every movie is not knowing where somebody is. Elizabeth returns Will’s feelings, but she’s a bit smarter about it, choosing to show that affection by caressing the coin she stole from his unconscious body like it’s a locket full of also stolen hair.

The second engine that movies this movie along is Johnny Depp’s performance as Captain Jack Sparrow. Jack is a character that would be incredibly annoying in any other movie, but he’s pleasant enough in this one. Jack is this odd fusion of slapstick immortal and the archetype of the lovable drunk. Any action scene with Jack is going to involve some kind of rope-based vaulting, things falling but just barely not hitting him, hat prioritizing, and the exaggerated movements of someone who is only about 70% in control of their body.

It’s hard to overstate just how big this character was at the time. If you were present for pop culture in 2003-20011, you have seen the discounted Spirit Halloween Captain Jack costumes and knew at least one person who unironically started “savvy.” You’ve probably even seen people doing Jack’s woozy body language which just gets more exaggerated as the films progress.

And What About The Plot

The Pirates movies are character-first ordeals for the most part. The stories are there, and sometimes they’re even interesting, but it’s the characters that give the movie its sea legs. Still, there’s some plot, and this is your classic “Pirates stole cursed gold and now have to linger on the cusp between life and death while they hunt down every piece they took.” It turns out that bit of gold Elizabeth stole from a half-dead child was the last piece of that cursed gold.

The cursed pirates naturally hunt the gold down once they feel it touch the water. No explanation for how exactly they sense this coin enter the ocean, but this is a movie with a zombie monkey and a blacksmith that can throw a sword through a wooden beam. Elizabeth gets kidnapped in short order by the best character in the series: Captain Barbossa is the quintessential gentleman pirate. He has the big hat, the menace, his own zombie monkey, and he betrays people like it’s his job. He dupes Elizabeth out of her stolen coin and, after a brief exhibition of what the Black Pearl’s skeleton crew looks like and can do, he spirits her away to the island of Tortuga. Jack, Will, and crew go after her.

Some of The Weird Stuff

The first Pirates movie has a lot to love, and pretty much all of that stuff is kind of weird. First, the whole movie is built around getting Elizabeth back from these wicked zombie pirates. That’s sensible. I’d also have a bone to pick with them. However, once it became clear their whole deal was to become mortal and killable again, kind of weird that everybody didn’t just sit aside and wave them on and then shoot them.

All throughout the movie, there’s this discussion of the legend of Jack Sparrow, how he was marooned on an island with a pistol, one bullet, and a sword, but he still made it off. He tells people he roped some turtles together with his own back hair when in reality he got really drunk off a cache of rum and bartered passage when he had the chance. When he’s once again stuck on the island, this time with Elizabeth, why isn’t this Jack’s lowest point. It’s played with almost the same tone as his time in jail, kind of mopey, but definitely not much more. Every time I watch it, I want to see Jack turn away from Elizabeth who has just learned his secret, sniffle, and help her make a raft or something.

How is a movie about pirates this straight? Pirates, at least the ones kind of like those in Pirates of the Caribbean, were outcasts who spent months at sea and had a surprisingly strong social structure. They are also some of the most campy characters around. Look at literally anything Barbossa put on his body. Look at those hats! I know this is Disney 12 years before Marriage Equality passed, but there was even a name for pirate same-sex civil unions! When the series inevitably comes back, there should absolutely be a matelot couple of grizzled old pirates who tenderly hold hands while they slaughter the crew of a merchant vessel. They could give each other flowers in the skulls of their slain adversaries.

Do you remember the first time you saw a Pirates of the Caribbean movie? Do you think they hold up? Tell us about it in the comments below.

Metroid Dread Review: The Best Game in the Series So Far
Saga Returning In 2022 After A Painfully Long Hiatus!