Afterlife Spoiler Review - They Still Ain’t Afraid of No Ghosts 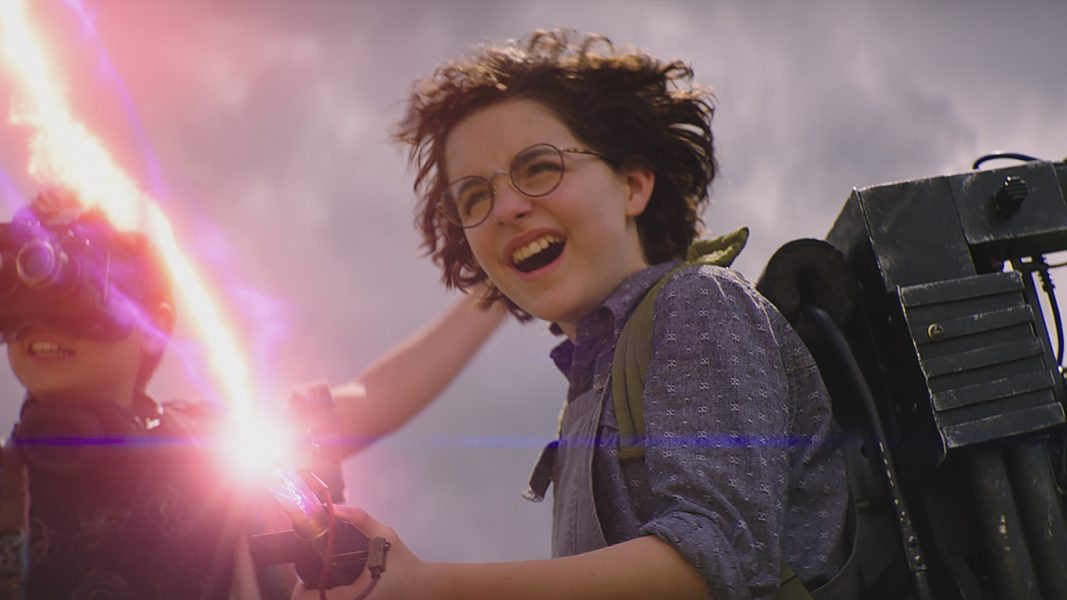 The original Ghostbusters came out more than a decade before I was born. So, suffice to say, I did not watch the 1984 film in theaters, in awe of the innovative method of telling ghost stories. However, when I finally sat down to watch the movie for the first time in 2020, I was shocked at how well it had held up over the decades. It made for the perfect spooky comedy, thanks to its timeless charm. The following films and other additions to the franchise were less of a hit. In this spoiler review of the latest sequel, Ghostbusters: Afterlife, we’ll look at how it meets expectations in more ways than one.

We might not be afraid of ghosts, but we are afraid of spoilers. If you haven’t seen the film, bookmark this link and return to it after you sit through a screening. In the meantime, read Joshua M. Patton’s spoiler-free review.

Ghostbusters: Afterlife Spoiler Review – Where Are The Ghosts?

Set in present-day 2021, Ghostbusters: Afterlife exists in a world where the events of the 1984 film are more than canon. There are clips of it all going down on YouTube, but kids who weren’t around for the Manhattan Crossrip of ’84 aren’t the ones watching them. In fact, some of the younger characters don’t even believe in ghosts, even when they’re playing a game of chess with one in their free time.

The film begins with the loss of one of the original ghostbusters. It’s established that Egon Spengler himself had spent his final years on a small farm in Summerville, Oklahoma. He leaves the property to his estranged daughter, Carrie Coon’s Callie, who is unsure of what to do with it. When an eviction in her old home forces her out, she brings her two young children, Trevor and Phoebe, along with her to the far-away town.

Summerville Has The Coolest Kid In Town

One of the charms of Ghostbusters is its characters. Peter Venkman, Ray Stantz, Egon Spengler, and Winston Zeddemore couldn’t be more different, but a unique blend of humor and curiosity bonds them together. A true sequel would need to find a similar approach in order to succeed at rediscovering that original success. It is where the 2016 reboot by Paul Feig fails and where Afterlife succeeds. As the film proves, these kids have the magic.

Enter 12-year-old Phoebe Spengler. The character is played by Mckenna Grace, who is known for being the “younger” version of various characters like Carol Danvers (Captain Marvel) and Sabrina Spellman (Chilling Adventures of Sabrina.) The actress does a splendid job at capturing Phoebe’s awkward humor and surprisingly bold personality, and the role is what gives the movie a real heart to fall back on.

Audiences never needed a female reboot of the franchise’s original film. Characters written as male don’t turn into feminist wins just by swapping their actors from men to women. Instead, well-written characters with depth who are written as women are what is needed to let young girls around the world know that they can be ghostbusters, too. And Phoebe is the shining image of this task. Her unapologetically nerdy, science-loving self flips any overdone tropes of “annoying younger brothers” in films and gives our next protagonist, Trevor, a teammate to root for. 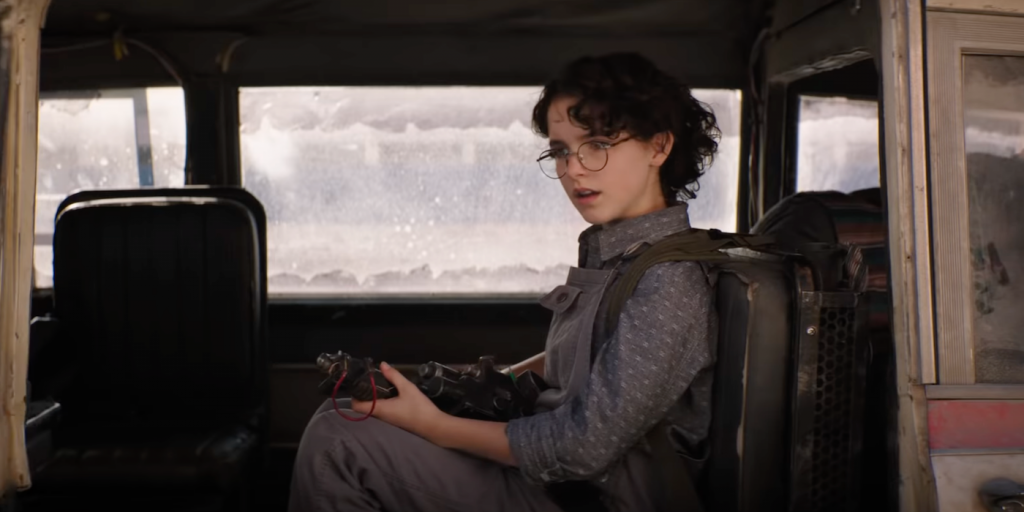 There Can Never Be Just One Ghostbuster

Trevor is Phoebe’s confident, ready-for-love, 15-pretending-to-be-17 brother. While Phoebe immediately begins summer school while arriving in Summerville, Trevor starts a part-time job at a local diner to work alongside his crush, Lucky (Celeste O’Connor). Played by Stranger Things‘ Finn Wolfhard, he provides an undeniably relatable character to watch grow up.

Our final youngster is one of the film’s scene stealers. Podcast (Logan Kim) calls himself that because he has an unsuccessful passion project that he seems to always be recording. He has an innocent crush on Phoebe, and he’s also more than ready to be brave and stand up to ghosts alongside her. He is comedic relief without being dumbed down or pushed to the sidelines, and we can’t get enough of him. 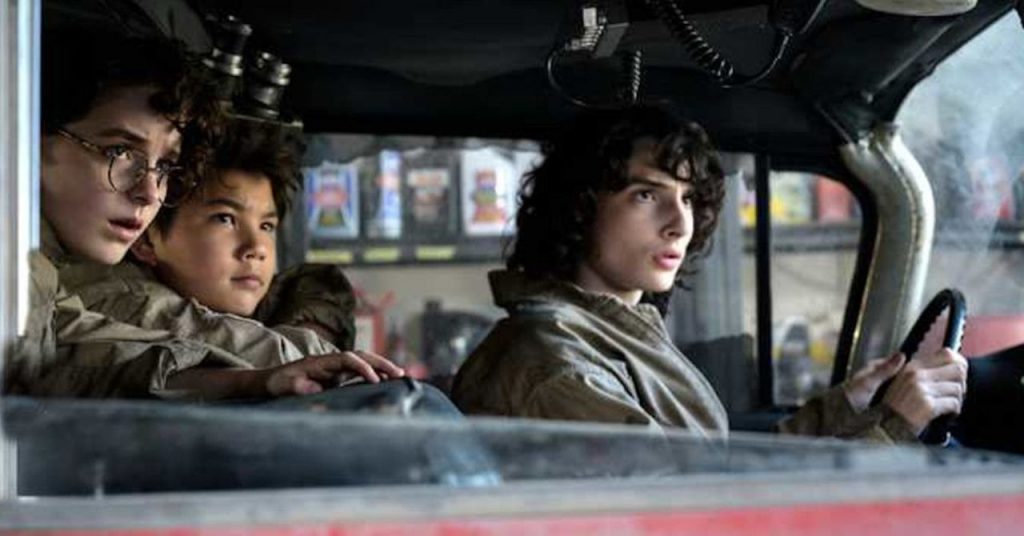 A Slow Journey To Discovering Ghosts In This Spoiler Review Of Ghostbusters: Afterlife

Some films like to get into action right away. Though it’s easy to fall into the trap of excitement, Afterlife takes a surprising amount of time before we see any ghosts outside of the film’s first scene. We get to watch the kids explore their surroundings in a new town and find them on their own after they’ve already learned a thing or two about confronting them.

This world-building gives more credibility to how such youngsters can eventually take down their enemies. With the help of her grandfather’s ghost, Phoebe is able to uncover a trap and a proton pack, as well as some remaining gear in Egon’s old underground lab. She even gets some practice with the proton pack before discovering her first creature. She and Podcast make an early attempt to trap Muncher, a metal-eating ghost (who is surprisingly voiced by Josh Gad) but are unable to do so successfully until they get the help of Trevor.

The trio then recruits Lucky (to the luck of Trevor) before chasing down more mysteries. Eventually, they’re led to the infamous mine atop a local mountain, where they uncover a hidden temple dedicated to Gozer, the shape-shifting god of destruction from the 1984 film. As it turns out, Egon had been protecting the world from Gozer this whole time, and his absence could mean a repeat of the Manhattan event.

Where The Heck Is Paul Rudd?

Just when we start to wonder where their parents are while the kids are off discovering ghosts, we learn that they’ve been possessed by the minions of Gozer. The Spengler matriarch had been cozying up to Gary Grooberson, a summer school teacher and amateur parapsychologist (Paul Rudd) who is ultra-cool but ultimately bad at handling a classroom. The duo ends up inadvertently helping Gozer by transforming into the Keymaster and the Gatekeeper, and the kids must rush to their aid to release them from their possessed states and lead Gozer back to Egon’s original trap on their dirt farm.

They all return to the farm in time to take down Gozer. The plan built by the amateur ghostbusters is nearly perfect, but a group of marshmallow ghosts gets in the way. Only one trio can help them, and they happen to make it just in time. In an almost too perfect entrance, all four original ghostbusters (one of whom is in ghost-form) return to take down Gozer one more time. It’s cheesy, funny, and the perfect way to end another ghostbusting film. The excitement can’t be explained in words, but the cheers throughout my theater’s auditorium are a reminder that we wanted to see these original stars no matter how it is written. 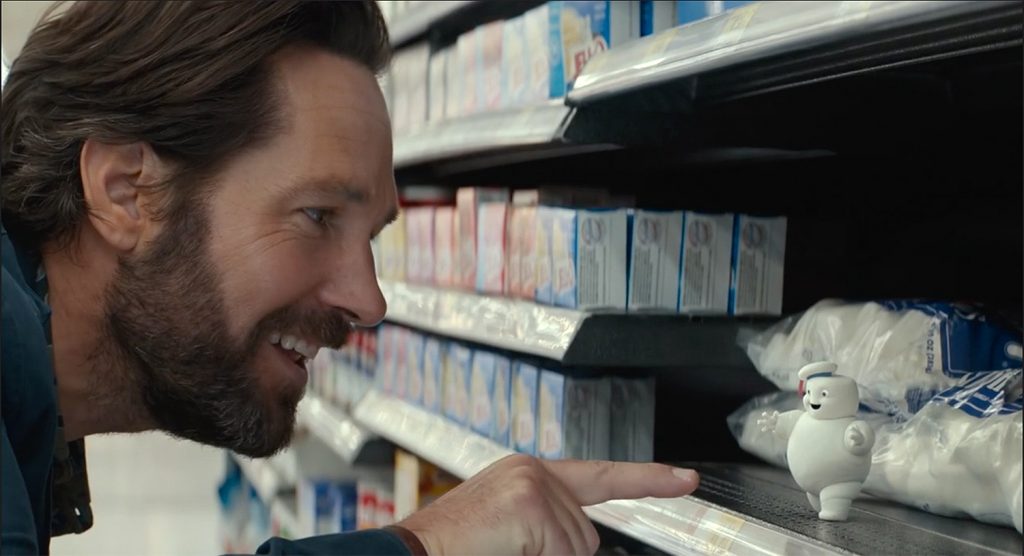 Why It All Works In This Ghostbusters: Afterlife Spoiler Review

I wrote Comic Years’ very own retro review on Ghostbusters back in 2020. A brief summary of my thoughts was that the film is both fun and campy without being too cheesy. This new film is absolutely full of camp, especially with the design of the ghosts and the possessed state of the minions. There are moments when we’re on the edge of being a little too silly, but the strength of other plot elements pulls us back into reality.

What makes this film especially special is its focus on coming-of-age elements. We’re looking at a core group of young kids who are growing up alongside mysteries like ghosts. The way that they approach everything, from budding relationships to handling dangerous weapons, is admirable. None of us fought ghosts as kids (unless you all had cooler childhoods than I did), but the entire movie still makes us miss those days where we had no fear and could step into abandoned mines without a second thought.

It’s also essential to navigate the different audiences that are going to this film, and director and co-writer Jason Reitman (son of Ivan Reitman, who directed Ghostbusters) does it in what is arguably the biggest success of the film. Fans who remember the sense of excitement back in movie theaters in the 80s will have enough nostalgia to hold them over while also not feeling like the entire plot is being repeated (even with a repeated villain.) Comparatively, newer fans of the world of busting ghosts will be pleased with a refreshing adventure story.

Ghostbusters: Afterlife is in theaters now.

Readers, we want to know what you thought about Ghostbusters: Afterlife, so let us know if you agree with our spoiler review. Did it meet your expectations? Drop your thoughts in the comments! We also want to know if you think that a sequel is in our future. The door is open for one, and the world is ready, but are you?