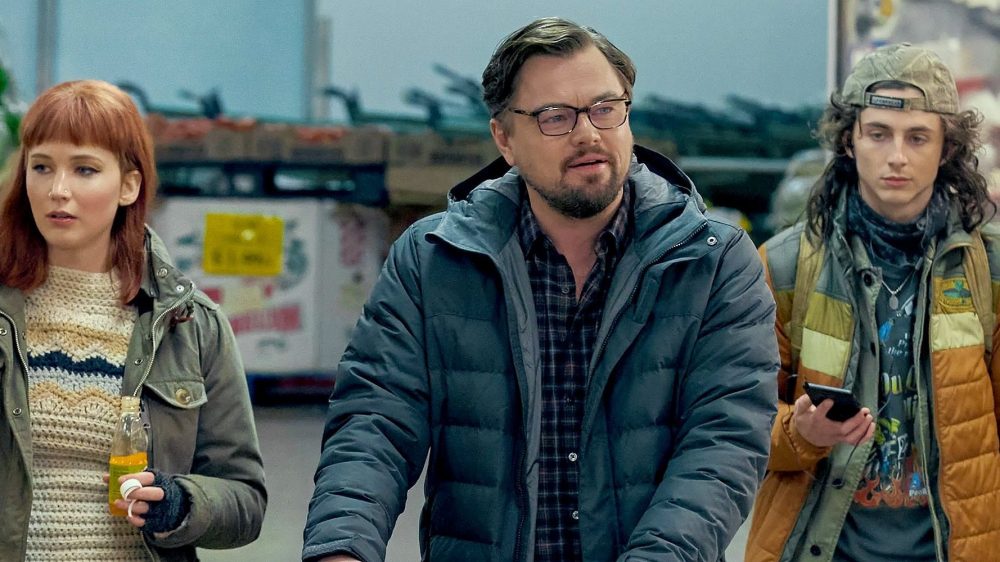 How do you think society would react if we learned that the world could come to an end? Many folks filled themselves with worries over predicted apocalypses like 2012, the millennium, and more. But if scientific proof were involved, would our outlook be any different? The subject of our review today is Adam McKay’s Don’t Look Up, an upcoming Netflix film that is so outrageous that only current events could write it. Like many of McKay’s films, it’s a polarizing one.

Don’t Look Up Review – Netflix Has a Big One Coming

Don’t Look Up starts with a grad student, Jennifer Lawrence’s Kate Dibiasky, discovering a new comet. She calls for her team, including Dr. Randall Mindy (Leonardo DiCaprio), to come to celebrate their scientific discovery. Though, they soon realize that this isn’t just a comet. It’s heading straight toward Earth, and it’s so big that it would lead to planetary extinction.

Kate and Randall are whisked away to share their discovery with those who might be able to do something about it, including the United States President, Janie Orlean (Meryl Streep.) Accompanied by her son (and Chief of Staff) Jason (Jonah Hill), the duo is convinced to sit tight and assess the damage. But when you only have six months left to go and even less time to take action, assessing is not enough.

We live in a world where it is easier than ever to share our opinions. Our thoughts can be shared with our friends, family, and total strangers within seconds. This means that we’re bound to read views that we don’t share. With the current political climate, worldwide pandemic, and your regular hot takes on pop culture, reading uneducated or irresponsible statements can become infuriating.

For Don’t Look Up, the film feels like 138 minutes of scrolling through your Facebook account and reading posts that you fundamentally disagree with. The film makes it even more frustrating because the naysayers are the people in power.

The Daily Rip, a fictional morning talk show hosted by Jack and Brie (Tyler Perry and Cate Blanchett), encourages their special guests and viewers to keep things light and fun. This theme persists amongst other media outlets, political advisors, and millionaires. Sure, we need to stay positive to stay sane sometimes. But there is a time and a place, and it might not be right now. 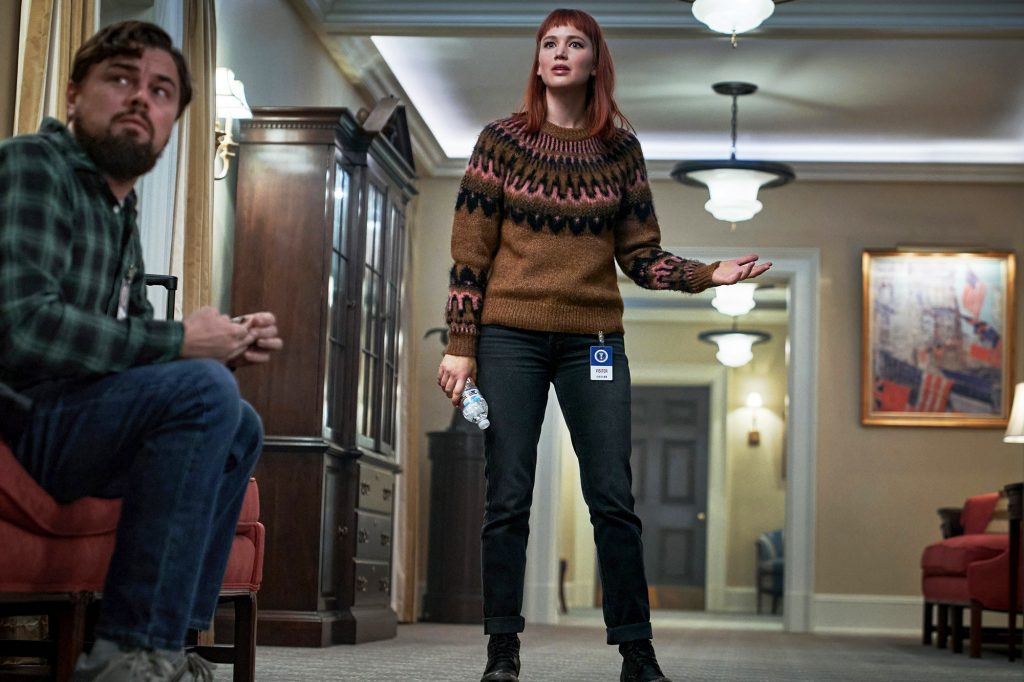 Don’t Look Up Is So Unbelievable… Until It Isn’t

Scientists having their desperate pleas fall on deaf ears isn’t anything new. We have seen it throughout the entire coronavirus pandemic and during the rise of vaccines. The film could satirize the response to anything proven that people have a hard time believing in. But the film was written before the pandemic, and its subject matter is an allegory for climate change.

Director Adam McKay has tried to write a film about this topic for years, and this is the idea that finally landed. The worsening health of our planet is a subject that impacts all of us. Yet, as McKay explains in an interview, it’s always “the ninth story down.” Even if we recognize the potentially catastrophic impacts, it’s rarely what we’re talking about at dinner.

Thanks to its real-world commentary and review on global affairs, Don’t Look Up is hilarious until you remember that these conversations are really happening. We see more trending headlines about celebrity breakups than disasters, and political controversies follow the personal lives of politicians more than their voting history. These are the things that control our world, and all we can do is laugh to keep down the existential dread.

Don’t Look Up Review: The Most Fun We’ve Had Crying In A Long Time

There are films that feel right at home on streaming platforms. However, watching Don’t Look Up in a movie theater made me wonder if it was the right home for it. The grand laughter and gasps of astonishment were the kind that makes you smile, knowing you were not reacting alone. In fact, this film got more loud laughs than any other film I’ve watched in theaters since the start of the pandemic.

The humor isn’t in the plot itself. A world-ending comet is nothing to laugh at. But our side characters remind us why we’re allowed to laugh. There is Hill’s flamboyant example of political nepotism with Jason Orlean. And then there is Timothée Chalamet playing Yule, an anarchist who reminds us of the stoner kids from high school who had no ambition but plenty of heart. There’s even a blink-and-you’ll-miss-it cameo by Chris Evans to remind us about the influence of cinema.

Ultimately, part of the fun is watching this movie without a clear idea of where the ending is headed. Will the comet destroy our world? Will the scientists be proven wrong? Or will the government put their differences aside to fix the problem while they have the chance? Comedies are often predictable, but this is one that could have gone in any direction.

Leonardo Dicaprio, Jennifer Lawrence, Meryl Streep, Cate Blanchett, Mark Rylance, Ron Perlman. The list goes on, only to sound more impressive at every new name. These are the cast lists that you see in Oscar-bait historical dramas or big blockbusters.

Despite the goofier film, the all-star cast gives it their all. DiCaprio is his usual commanding presence. Lawrence is relatable and quirky. Streep impresses us at every turn. Mark Rylance gives a terrifying yet hilarious portrayal as a millionaire with far too much influence on the world. And in what might be a controversial opinion, Chalamet gives a performance that impressed me more than his lead in Dune.

Don’t Look Up is in select theaters now before it hits Netflix on December 24th, 2021.

Readers, do you agree with our review of Don’t Look Up? There are a lot of conflicting reviews out there, but we want to hear yours.