Comic book fans all over felt a reaction to the news that Michael Keaton is in talks to play Batman again. However, because any fruits of those talks will be (at least) two years away, it’s only natural for folks to wonder exactly how the DCEU plans to deploy Michael Keaton’s Batman as the movies take the step into the multiverse.

Interestingly, the largest criticism of the DCEU thus far has been how desperately they seemed to be chasing Marvel Studios’ success with their connected universe. This is ironic, considering that DC—with Superman and Batman—had an early lead on making high-quality comic book films. Now, I personally don’t believe superhero movie fatigue is something studios have to worry about. So, I think there is room for both DC and Marvel (and Valiant, Dark Horse, et al.) to all get their time on the big screen (or an exclusive streaming service deal). Yet, by bringing Michael Keaton’s Batman into the DCEU, Warner Bros. has a chance to take a leap forward in the ongoing Marvel and DC rivalry.

In our original report on the Keaton news, I speculated that this will inevitably be a build-up to a film version of Crisis On Infinite Earths. In fact, the CW crossover of the same name may have been a test run for this concept on the film side. Fans all reacted positively to it, it helped align the TV universe into a cohesive whole, and they made it look amazing on a TV budget (with dozens of cameos). So, it’s fair to say that Crisis is in the future. However, they may not want to pull the trigger on those red skies just yet. About a month ago, the news broke that Henry Cavill was also working out a deal to play Superman again. Interestingly, his deal sounds a lot like the one they are working out for Michael Keaton’s Batman, and this can give us a picture of the direction of the DCEU. Superman and Batman are the most adapted characters from the DC pantheon and in all of comics, save for Spider-Man. Superman has been in eight films, and Batman has been in ten, not counting Matt Reeves’ The Batman. Relegating them to supporting characters is a wonderful idea. They will instantly take over any movie in which they appear, and a little bit of those characters can go a long way.

With Zack Snyder’s Justice League set to debut on HBO Max, many fans want to see his Batman take on the role of older mentor. However, when Ben Affleck stopped being the Batman, he apparently did it because of the personal toll it took on him, specifically with respect to his sobriety. So, as much as I’d like to see Batfleck again, it may not be healthy for the real-life person who plays him. Thus, Michael Keaton’s Batman is a great compromise, because the DCEU still has its Dark Knight in the twilight of his career.

What Stories from the Comics Could the DCEU Adapt That Aren’t Crisis On Infinite Earths? Again, a DC property introduces a multiverse, you can expect that a Crisis is coming. However, since that is, ultimately, a reset button, I would bet that Warner Bros. wants to delay hitting it as long as possible. Time heals most wounds, and any hot blood about Justice League seems to have cooled. And a Crisis situation would likely mean recasting their iconic and successful characters, who’ve only just started their runs.

Of everyone currently playing a DC character, probably only Dwayne Johnson’s Black Adam and Robert Pattinson’s Batman will survive the shuffle. So, how might they send off these characters? Here are some ideas. The CW Crisis story hinted at this story with Kevin Conroy in the Batman/Bruce Wayne role, specifically the metal exoskeleton he needs to stay upright. While he was the darkest Batman we’ve seen, Keaton could ultimately end up in this role, opposite Cavill’s slightly despotic Kingdom Come Superman. The DCEU could declare war on metahumans and super-villains, with Superman and Wonder Woman running a prison for them. Batman and other heroes are trying to take them down. Ultimately tragedy happens, which would set things up great for a Flashpoint reset or the movie Crisis scenario.

The DCEU Tries to Adapt Dark Knights: Metal (A.K.A. Into the Bat-Verse) 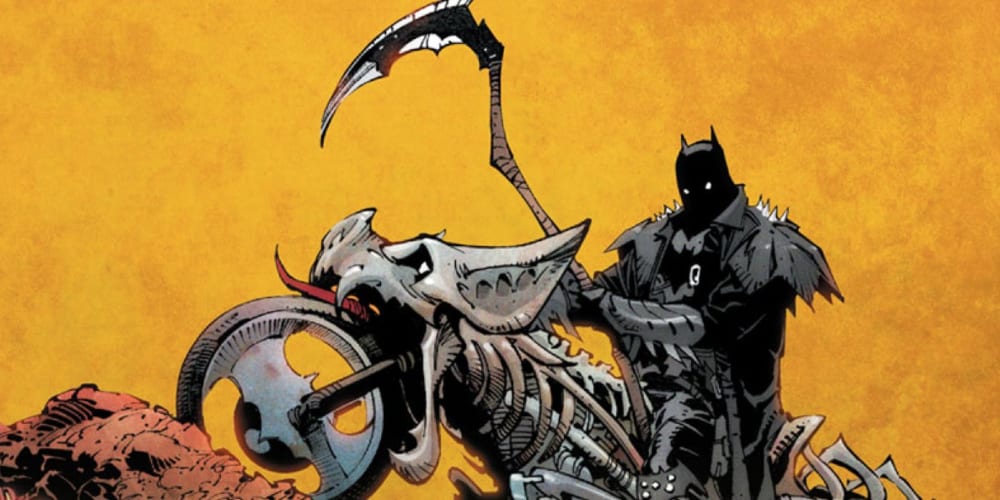 The recent “Metal” events at DC have opened up the Batmen of different corners of the multiverse, revealing some truly horrific (and some very silly) versions of the hero. While likely not a direct adaptation, they could adopt a kind of Bat-Verse in the DCEU, with Michael Keaton’s Batman playing a central role in fighting The Batman Who Laughs. (Also, fun fan-casting, Joaquin Phoenix as this dark, evil version of Batman.)

Even if they don’t go this route, some idea where we see a bunch of different Bat-people seems like something they’d like to try. They could connect Robert Pattinson’s Batman to the larger DC Multiverse. And they could throw money at people like Christian Bale and George Clooney to appear (and the latter might do it for a second shot at the Dark Knight…all due respect to the late Joel Schumacher).

Like many post-Justice League DC projects in pre-production after Joss Whedon’s Justice League debuted, the Batgirl film ended up delayed. The prevailing thinking in the reports about the addition of Michael Keaton’s Batman to the DCEU is that he will play a role in the future Batgirl film. For many years, fans of Batman Beyond clamored for a live-action adaptation of the remarkably good series for a character created for TV before the comics. The premise is that an aging Bruce Wayne trains a new Batman, Terry McGinnis in Gotham in the 2040s. With some slight adjustment and multiverse shenanigans, the Batman of the Tim Burton era (which inspired the cartoon series) could mentor a version of Batgirl in a story that adopts the Batman Beyond premise with a woman lead character.

Also, I’d not be surprised if it were not Barbara Gordon who becomes Batgirl in the film. Cassandra Cain was in Birds of Prey, so it’s very possible that she will be the Batgirl the movie focuses on.

Personally, of all these options, my money is on this being the way they go with Michael Keaton’s Batman in the DCEU, at least until the Crisis hits.

In a tweet from a New York Times reporter, Michael Keaton’s role as Batman has been (even more) confirmed. While (if?) Ben Affleck is back, kind of, it’s a one-off with Michael Keaton being the Batman of the DCEU for now.

What do you think the DCEU will do with Michael Keaton’s Batman? Share your best theories and story pitches in the comments below.