A Karate Kid 5 movie comes along. Sony revealed that a new Karate Kid movie, dubbed “the rebirth of the original Karate Kid franchise,” releases in 2024. This perplexed some viewers given that Cobra Kai on Netflix is currently successful and has many of the original cast members, including Ralph Macchio (Daniel LaRusso) and William Zabka (Johnny Lawrence). The fifth season of the show just began, and recently, Macchio hinted at the prospect of a “Karate Kid Cinematic Universe.” The new film, according to the show’s co-creator Jon Hurwitz, has nothing to do with Cobra Kai.

The new Karate Kid 5 received announcement by Sony yesterday. It comes out in 2024. Given that Cobra Kai on Netflix is currently popular and features many of the original cast members, including Ralph Macchio (Daniel LaRusso) and William Zabka (Johnny Lawrence), this perplexed some viewers. Recently, Macchio made a suggestion that there might be a “Karate Kid Cinematic Universe” considering the fifth season of the show has only recently begun. Co-creator of the program Jon Hurwitz claims that the new movie has nothing to do with Cobra Kai. Fans already had their minds full thinking about possibilities for season 6.

Cobra Kai co-creator responded to a question from a fan

“Have you heard anything about a new movie for karate kid??? Is it real?” A fan inquired on Twitter. “The guys and I would love to make Karate Kid and Cobra Kai movies and hope to someday. But this one isn’t from us or focused on the Cobra Kai cast. Don’t know much about it, but wish it well.” Hurwitz responded. You can check out the post, which includes a lot of heated fans in the comments saying Sony’s announcement was “disrespectful,” below: 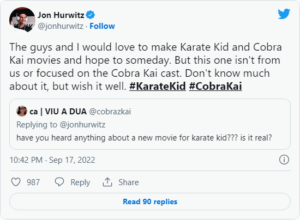 “The thing that’s been created, there’s kind of this Karate Kid Cinematic Universe now. Where Cobra Kai is, you know, at the center of that and when that day does come in for a landing. There are other areas to draw from.” Macchio recently told ComicBook.com. “I mean, whether it’s … Is there a Miyagi origin story? Is there a Cobra Kai prequel before The Karate Kid? Are there spin-offs with some of the young cast of these characters? Who knows? But we’re not done as long as we’re given the opportunity to really bring it in. As long as it evolves organically. These guys that write the show really have their finger on the pulse of that.”

Macchio added, “There’s stuff that they wrote in Season 3 that didn’t happen until Season 4. ‘Cause there wasn’t any more room in Season 3. There’s stuff that was in Season 5 that we know we shot that’s held for the future if we get that green light. So, there’s more to come, we hope.” Indeed, the team on Cobra Kai have scenes for season 6 of the show.

Cobra Kai is a successful series from the Karate Kid franchise

The American martial arts comedy-drama television series Cobra Kai is a prequel to Robert Mark Kamen’s first Karate Kid movies. Sony Pictures Television is the series’ distributor. Josh Heald, Jon Hurwitz, and Hayden Schlossberg are its creators. The first two seasons of the show were on YouTube Red. The third season onwards, however, is only on Netflix. Ralph Macchio and William Zabka, who played Daniel LaRusso and Johnny Lawrence in the 1984 film The Karate Kid and its sequels, The Karate Kid Part II (1986), and The Karate Kid Part III (1989), respectively, reprise their respective roles in the series.

A second season premiered on YouTube Red on April 24, 2019, after the first season debuted on the platform on May 2, 2018. When season three of the show’s production was finished, YouTube decided to discontinue making original scripted television, leaving the program without a home. That left Netflix the opportunity to take over.

What do you think of a Karate Kid 5 movie?