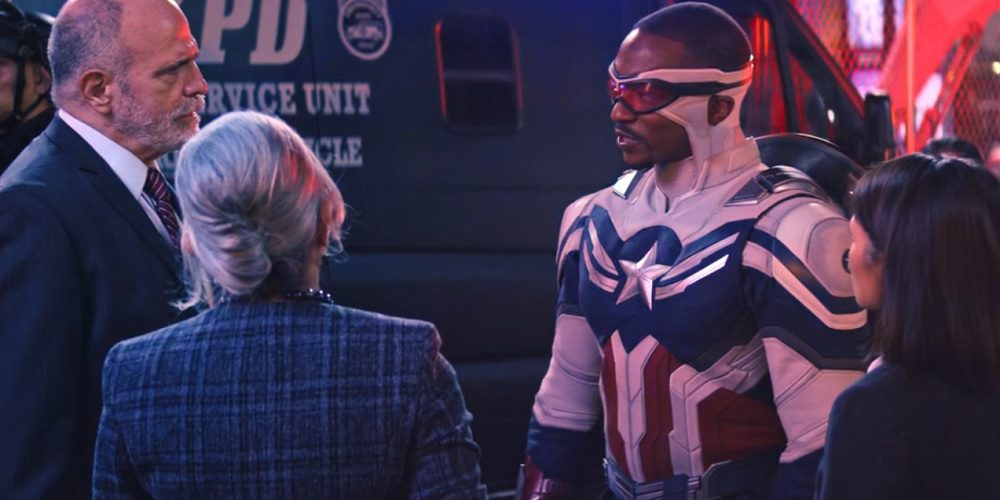 After the stunning The Falcon and the Winter Soldier gave us a new Captain America in the finale, we hoped this was coming. While never officially announced or confirmed, producer for the series Malcolm Spellman won a deal to write Captain America 4. Yet, in order to make that movie, well you need the guy who plays the character. Well fear not Marvel fans, a new report says that Anthony Mackie closed his deal to play Captain America in his first lead role in a Marvel film. From what we know, this film is still in very early stages, as they’ve only just now locked down the film’s star. We also don’t know if Mackie’s deal is a one-off or if it’s a larger deal, despite Kevin Feige indicating Marvel Studios was looking to do away with long-term contracts.

Again, other than Anthony Mackie finalizing his deal to star as Captain America, we don’t know much about this movie. For example, Mackie’s co-star in The Falcon and the Winter Soldier, Sebastian Stan, is not mentioned nor are we certain he’s even in the film. It’s possible that his story could continue separately, either in another film or perhaps a Disney+ series. We know from Black Widow, that Yelena, as played by Florence Pugh, will show up in Hawkeye.

When the news about Spellman’s involvement broke, Mackie claimed to be as in-the-dark as the rest of us.

As he told EW.com:

“I literally found out yesterday in a grocery store…. The checkout guy named Dwayne, a cool cat, he’s like, ‘Yo, man. Is this real?!’ I’m like, ‘I haven’t heard anything.’ That’s what I love about working for Marvel. They call you, they’re like, ‘Come to L.A. We wanna tell you what’s going on.’ So, I’m excited to see what happens, but I haven’t heard anything.”

Frankly, none of this is a surprise. Still, it is great news for fans who hope to see a new version of Captain America up on the screen. Mackie’s role in the MCU up to this point has, mostly, been to provide some comic relief and be in awe of Chris Evans’ Steve Rogers. In fact, much of The Falcon and the Winter Soldier dealt with him struggling in taking on the mantle. It will be interesting to see where they take this new story and new Captain America. Also, worth mentioning, is that the report states this is not the supposedly mega-secret project that could bring Chris Evans back to the MCU.

The Falcon and the Winter Soldier is currently available on Disney+.

What do you think? Are you surprised they only just closed a deal for Anthony Mackie to play Captain America in the new film? What kind of Cap story do you hope to see?