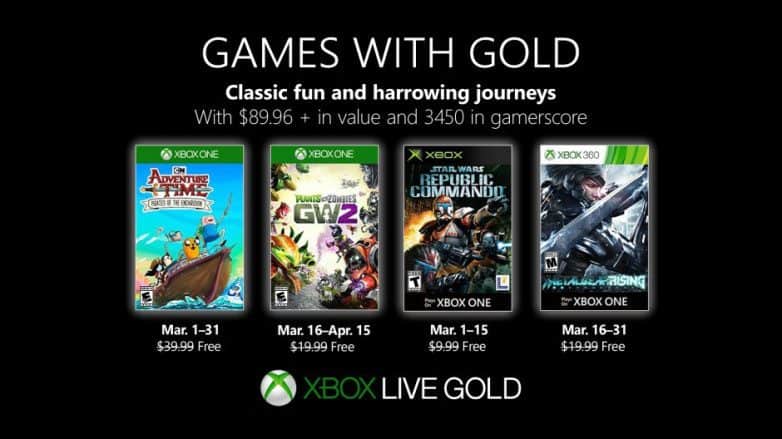 Star Wars: Republic Commando is no longer available for Xbox Games with Gold. The good news is three options are still up for grabs. Xbox Games with Gold is a perk for having Xbox Live. If you have a subscription, four free games are available from the 1st of a month through the 31st. While one has expired, three other March options are still available for pickup for the best price there is: free.

Prepare for all-out battle in Plants vs. Zombies Garden Warfare 2. If you have not yet played a Plants vs. Zombies game, it is an absolute must. Dr. Zomboss, the villain of the series, has worked hard to grow his zombie army, but the plants want to do everything they can to stop them! Play in 24-player multiplayer, 4-player co-op modes, or go at it solo. Suburb battles have never been so fun.

Adventure Time: Pirates of the Enchiridion

This beloved Cartoon Network series takes it to the high seas in Adventure Time: Pirates of the Enchiridion. Heroes Finn, Jake, Marceline, and BMO find the Land of Ooo is underwater. By hitting land and sea, pirate battles and crazy bosses stand in their way of the truth. Mathematical! If you love the TV show, you will love the game as well.

Considered one of the most exciting games to date, this series is a must play if you love combat. The Metal Gear franchise goes a new, creative direction in Metal Gear Rising: Revengeance. Focusing on Metal Gear action and epic storytelling, the player takes control of Raidan, a cyber-soldier. As a child, Raidan was trained to be half-man, half-machine. Slice and dice robotic enemies and take on a larger than life conspiracy with this title. The action never ends with a katana action and a jam packed adventure.

Xbox Games with Gold for April

There are a lot of deals for Xbox Games with Gold and Live subscribers right now. Additionally, it has never been easier to become a member. One deal running now at Best Buy gets you Xbox Games with Gold  for 6 months for the price of 3: $24.99 USD, and look out for Xbox One Black Friday deals this November. Announcements for April’s Xbox Games with Gold should be coming out shortly, so stay tuned to Comic Years for more news on gaming and comics!