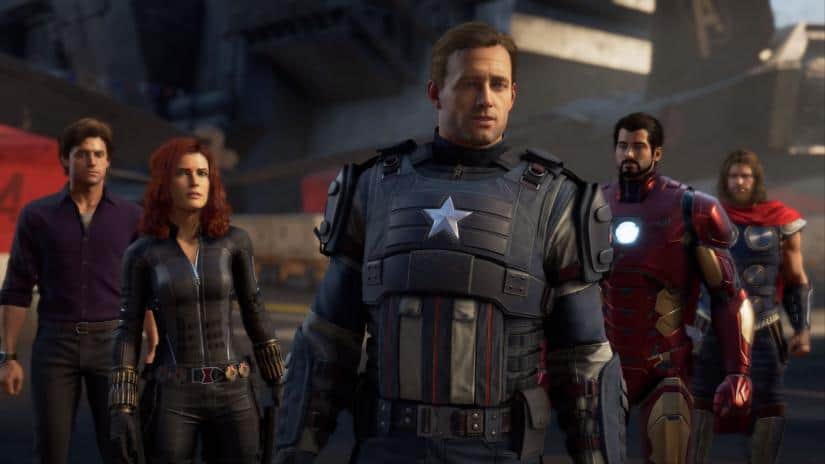 There are a ton of great suits that the Avengers have used over the years, both in comics and movies. There are some very memorable suits we would love to see in the new Square Enix Avengers game partnered with Marvel. From Iron Man suits to Hulk iterations that we all love, there are a lot of possibilities for the new adventure.

From the trailer of the Square Enix Avengers game, we know a few things. First of all, the game is going to center around a great tragedy. During a holiday called A-Day, which celebrates the Avengers, the Golden Gate Bridge is attacked. As the Avengers fight the attack, they return to the holiday celebration to see havoc. Because of their absence at the main party area, many were slain. This leads to a ban on the Avengers. Because of the A-Day event, the Avengers hang up their costumes.

Five years later, the Avengers are back to deal with the mess they made. With more threats coming to Earth, it looks like they will once again need to fight. The lead combat designer Vincent Napoli and director Shaun Escayg, are announcing now that some changes come with the time jump. One of which, is the costumes that the heroes will wear. Likewise, their attitudes and energy are different as well. They do not want to make another major mistake. It is rumored that some may even have a hard time dealing with returning to the fight. It will be interesting to see how they all react to being back in action. Because of the announcement of costume changes being possible, we’re going to go over one costume for each main Avenger that we want to see in Square Enix Avengers.

There are a few costumes we have in mind for the change coming to the Square Enix Avengers. Let’s start with one of the leaders of the group: Iron Man.

Black Widow’s costume in the Marvel Cinematic Universe films is too basic. The best part of the comic outfits for Natasha Romonov is the flourishes, so we want to see the classic comic look come back. That means literal machine gun shells on her wrist in gold, and a belt as well. It gives her a mercenary look, and would fit in great with the outlaw style of the Square Enix Avengers plot.

Hulk is strong enough without any sort of Mach suit, but that doesn’t stop Tony from making him some armor. Protecting his weak spots and providing extra strength, Hulk suits return in many current runs of the green giant. They look amazing, and offer him a ton of extra coverage. That’s good, because Hulk is often double, triple, or even quadruple teamed in attempts to take him down. This makes the fight fair, and would be a lot of fun to see in the video game. Nothing Hulk Buster level, just a little something so Bruce doesn’t have to run around in his shorts.

We saw Cap on the run when Tony and company turned on him. This led to a really cool suit that we would love to see in the Square Enix game. The Fugitive Suit is a stark contrast to the blue and red suit we know the Captain for donning. His patriotism is put on hold in this outfit, as he looks to do what is right from the shadows. What begins as a way to stay hidden ends up being a really cool suit. With the plot in the Square Enix game putting the Avengers in a similar situation, it seems perfect.

In the comics, Thor loses worthiness of Mjolnir. When this occurs, he changes up his look, and it would fit perfectly with the content of the game. Like Captain, the suit change would make sense as the hero is in denial about his place in the world. He is meant to help humans, and now, he is being rejected by them. While the MCU went with Fat Thor as a reaction to rejection and failure, this would make much more sense. Plus, it gives him a rugged look that he could use until he gets Mjolnir back. When he does, give him his classic suit and let him raise chaos on the enemies that threaten Earth.

Square Enix Avengers – When Does it Release?

We’re counting down the days until the new Square Enix Avengers game. At E3, we got a great look at the combat styles of each character. It will be interesting to see how the game plays, as opposed to just how it looks. E3 can render up images that are unplayable, so it will be telling to get our hands on the game itself. The Avengers is set to release on PS4, Xbox One, PC, and Google Stadia on May 15, 2020.

For now, get excited by revisiting Avengers: Endgame in theaters, with new footage placed in the credits. The push is likely to get Avengers over that mark to take over Avatar as top grossing films of all time. Captain Marvel, who is not in Square Enix Avengers, is also on DVD and Blu Ray now. Marvel is on top of its game, and we can’t wait to play this new game.