The release of World of Warcraft: Dragonfly is getting nearer. In its spirit, Blizzard even made the Shadowlands expansion free. But, several players have been somewhat hesitant to trust Blizzard with new content.

Shadowlands was a blast for me. Both the story and its dungeons and raids gave me hours of fun. The new “afterlife” was fascinating, both in environments and characters. The grind felt like a breeze after you made it there.

That said, many players have complained about the last expansion in World of Warcraft: Dragonflight. According to fans, updates were far in-between. So, that created content droughts between the patches. Plus, the long-term content failed to catch many fans.

Also, some fans are still pissed about Spellbreak’s shutdown.

That means Dragonfly has a huge responsibility. Many players are waiting for it to reinvigorate their interest in the game. Moreover, Blizzard could use some positive feedback after its controversies.

But, can it compete with releases like the Miles Morales PC game? The first pre-patch is coming tomorrow, October 25. So, let’s find out.

In this blog post, the development team showed the upcoming pre-patches’ and dates. As you can see, the first one is set to release tomorrow, October 25. Thus, that means extensive downtime for maintenance.

According to the tweet above, it’ll take eight hours. During that time, players won’t be able to log into the game. Luckily, it’s not in vain.

The first of two pre-patches for World of Warcraft: Dragonfly

As I said, this is only the first pre-patch. Yes, World of Warcraft: Dragonfly. Will receive two pre-patches ahead of its release. They’ll help onboard players into the new features coming to the new update. 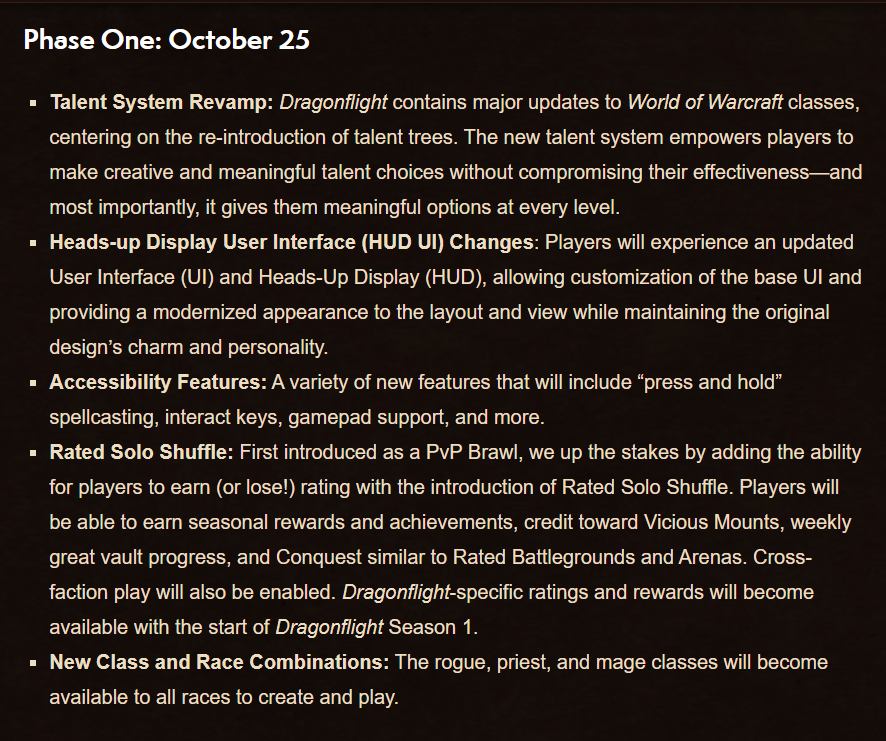 Firstly, we have a strictly gameplay-related pre-patch. In this one, the largest update is the talent system revamp. It’ll re-introduce talent trees. The goal is to give players more creative options to customize their gameplay.

The UI will also get modernized. For instance, it’ll become more customizable. And, it’ll get a bunch of accessibility features.

It’ll also introduce the Rated Solo Shuffle for World of Warcraft: Dragonflight. It’s basically an expansion of the PvP rating system. With it, the stakes will be higher. You can lose your rating considerably. But, the rewards are also better.

Finally, the mage, priest, and rogue classes will be available to all races. 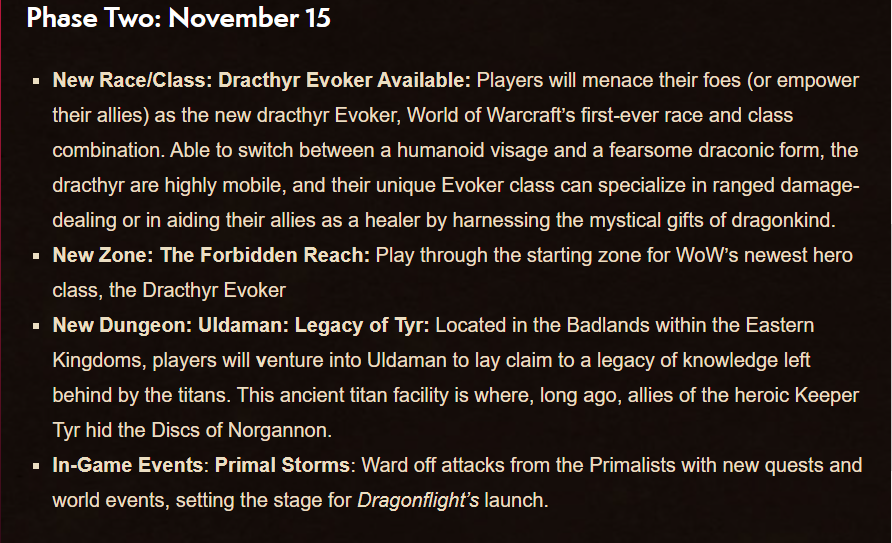 The second pre-patch brings a ton of juicy content.

The second pre-patch brings a ton of juicy content.

Nevertheless, things get fascinating on the 15th of November. The final pre-patch opens up strongly with a new race and class. The Dracthyr Evoker is the first race-class combination. It lets you switch between a humanoid and a draconic character.

It also specializes in ranged DPS and support.

But, the content doesn’t end there. The Forbidden Reach is the new starting zone for the new class. And, Uldaman: Legacy of Tyr is a new dungeon in the Eastern Kingdom. Players will venture there to try and recover the Discs of Norgannon.

Lastly, Primal Storms are the main in-game event for the patch. Primalists will launch attacks for you to ward off. So, that means new world events and quests. It sets the stage for World of Warcraft: Dragonflight launch in December.

What players can expect to see in the World of Warcraft: Dragonflight

In the World of Warcraft: Dragonflight trailer above, we can see Dragonflight’s main focus. In this expansion, we’ll learn about the five Dragonflights and their aspects. The Titans empowered these Dragon Aspects as part of Azeroth’s defense.

The Dragon Isles have been a constant interest in World of Warcraft’s lore for a while now. And, they’ll surely play a central role in the new expansion. Apparently, players will help the Dragon Aspects restore their powers. Plus, they’ll aid the protection of the Dragon Isles.