Last month, we covered the high school expansion coming this month. However, that’s not the only news hitting the game. It remains one of the most popular games today. So, it’s not surprising that a new The Sims 4 update is hitting the game.

The Sims 4 has been a great adaptation of the intricacies of life. For instance, it allows players to create countless characters. Each one will have its own personality, preferences, and quirks.

That leads to sexuality. Until now, all Sims have been open to all options when it comes to romance. There aren’t many taboos in The Sims world. And, it’s been an incredibly progressive game since its inception.

That said, things might change soon. And, we’re not saying it’s a bad change. As EA explains, the next update will let players choose their Sims’ sexual orientation. That way, they can make a closer character to what they really are.

It’s definitely an exciting update while players wait for the series’ next chapter.

New opportunities to personalize your Sims

With The Sims 4 update, Sims will have more customization options. Players will have the chance to set their characters’ sexual orientation. So, they can reflect the real world more accurately.

The changes will come with a free update with the next expansion. It’ll add a sexual orientation option on the Sim creation screen. It’ll let players tinker with more settings to make their character more unique.

Players can choose which sex the Sim is interested in. That includes men or women, both or neither. Once set up, the Sim will stick to those preferences. They’ll turn down romantic attempts outside that profile.

The blog post acknowledges the binary terms. But, technical reasons stand in the way of adding more genders. So, that might be content for another game. The Sims 4’s engine is already 8 years old.

Also, players can set their Sims as still exploring. That means they’re still figuring themselves out. So, their sexual orientation might change over time.
Finally, players can set whether their Sim is interested in physical intimacy. That’s true for WooHoo in adults and messing around in teens.

How will The Sims 4 Update work? 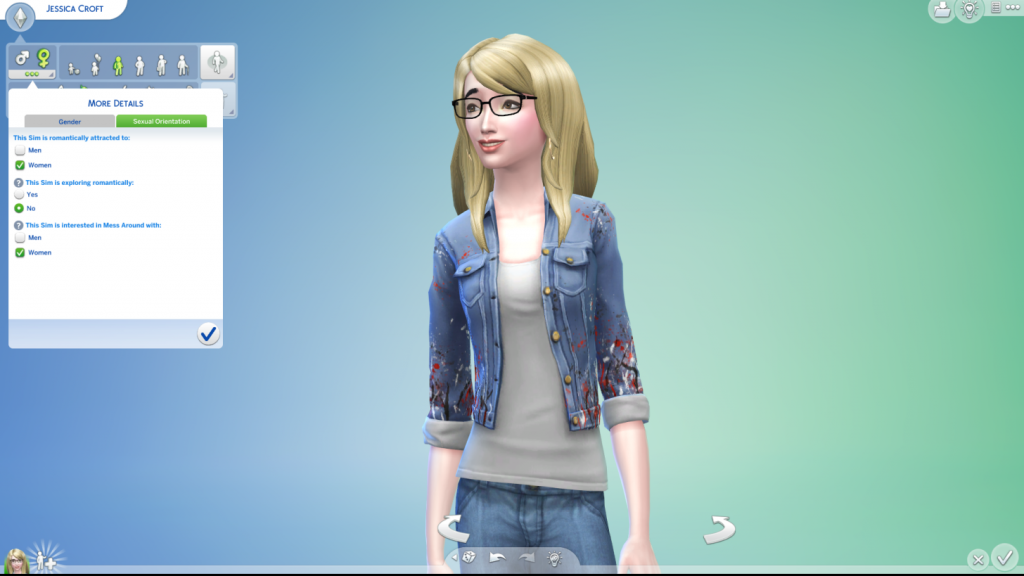 As the image above suggests, there are three elements during creation.

Firstly, we have attraction. Here, we’ll set the gender that our Sim prefers. As such, our Sim will reject anyone outside this setting. Moreover, players can choose more than one option. Likewise, they can choose none. That would basically make their Sim not attracted to anyone. Also, the team expects to include more gender identities.

The second option is exploring romantically. Essentially, this makes it so that your sexual orientation can shift with time. So, setting it to “yes” means that your Sim is still figuring things out.

Finally, we have their interest in WooHoo. It determines which gender your Sim wants to WooHoo with. This option is completely independent of their attraction. Your Sim can be attracted to both genders. But, they might only like physical intimacy with one.

Traditionally, you needed to advance in a romantic relationship for WooHoo. You couldn’t jump from friendship to WooHooing. In a way, romance acted as a gate for this feature.

Now, you don’t need that for WooHooing. Young adults and other sims can ask friends to be WooHoo Partners. Essentially, it works as friends with benefits.

Of course, it all depends on whether the other Sim accepts. They can always reject your advances.