1986’s Pro Wrestling on the NES was a good time. We had no idea, however, how great things were going to get just a few years later. 1989 brought two iconic games: WCW Wrestling and WWF Wrestling. Flash forward to the SNES days and things only got better from there. Wrestling video games have always been popular among diehard fans of the sport and even curious casuals. The simplicity of the old games featuring two buttons and a handful of input moves provided a straightforward experience everyone could love. While modern wrestling games are much more complex, Action Arcade Wrestling strives for retro fun and just released on the Nintendo Switch – here’s our review!

This Wrestling Game Is a Blast from the Past 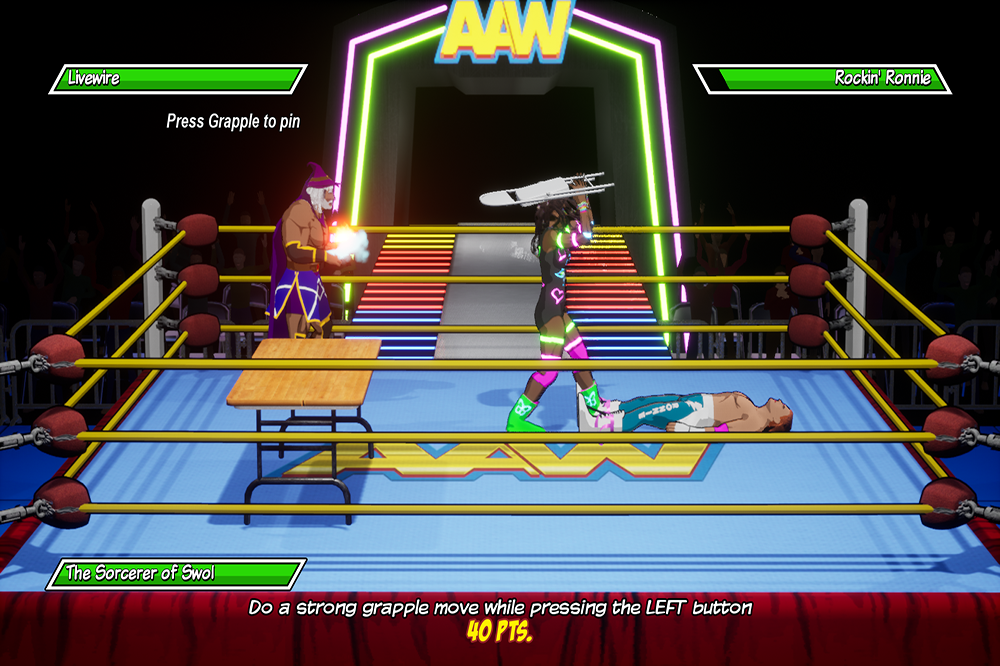 New to the Nintendo Switch, retro wrestling video game fans will absolutely want to check out Action Arcade Wrestling. If you want the throwback feeling of performing countless moves with only two buttons and a movement input, this is a dream come true. Developed by VICO Games, this release is a love letter to 90s wrestling games. While it doesn’t come with the licensing to today’s fighters or yesterday’s titans, it does feature a cast of 30 original wrestlers. These might not be actual names in the wrestling business, but they all feel like they’d fit right in.

Over 25 playable game modes allow you to really make the most of this experience. You can play classic matches like One vs. One, Tag Team, Three-way match, or a Four-way match. 4-10 Person Elimination matches, Tornado Tag, and Battle Royal modes offer even more fun. The game looks great too with a cell-shaded art style that makes things look modern enough while still evoking the classic games like WWF War Zone or Wrestlemania 2000.

I don’t keep up with WWE or AEW action today like I did in the Attitude Era. That said, this game takes me right back to picking favorites to win ridiculous matches. Of course, those favorites like The Rock or Stone Cold Steve Austin aren’t in the game – technically. Fans, however, have access to a really great character creator tool that takes the game to a new level. 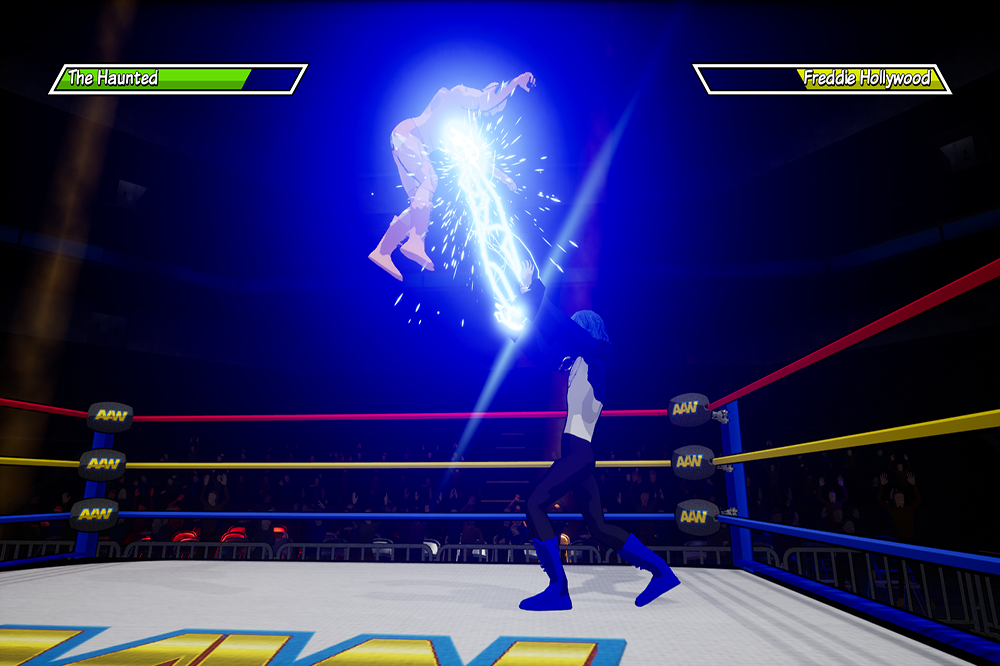 While the original created characters for the game are good, the Wrestling Lab in Action Arcade Wrestling takes things to new heights. Favorite fighters from a modern release like WWE 2K22 can actually be used in this game. It just takes a little time in the creation suite. Options to make wrestlers and arenas are available with a slew of features and customization options. Take advantage of body morphing, texture uploads, UV mapping, move set assignments, and physics-based accessories to literally make anything come to life.

VICO Games knows people are going to make WWE wrestlers. That’s not really something they can stop, nor would they likely want to. Therefore, players on the Switch picking up Action Arcade Wrestling will find hundreds of actual wrestlers already in the Wrestling Lab. If you want to mess with character creation, then go for it. If not, then you can simply add created characters by others to your game’s roster. You’ll also find a ton of fan-created originals. My favorite by far was a vending machine. Yes, an actual vending machine, that you can upload and use as a fighter.

Action Arcade Wrestling itself in terms of gameplay and visuals is good. Wrestling Lab makes it truly great. If you’re a fan of retro wrestling games, then I’d highly recommend this one. That takes us to the score. 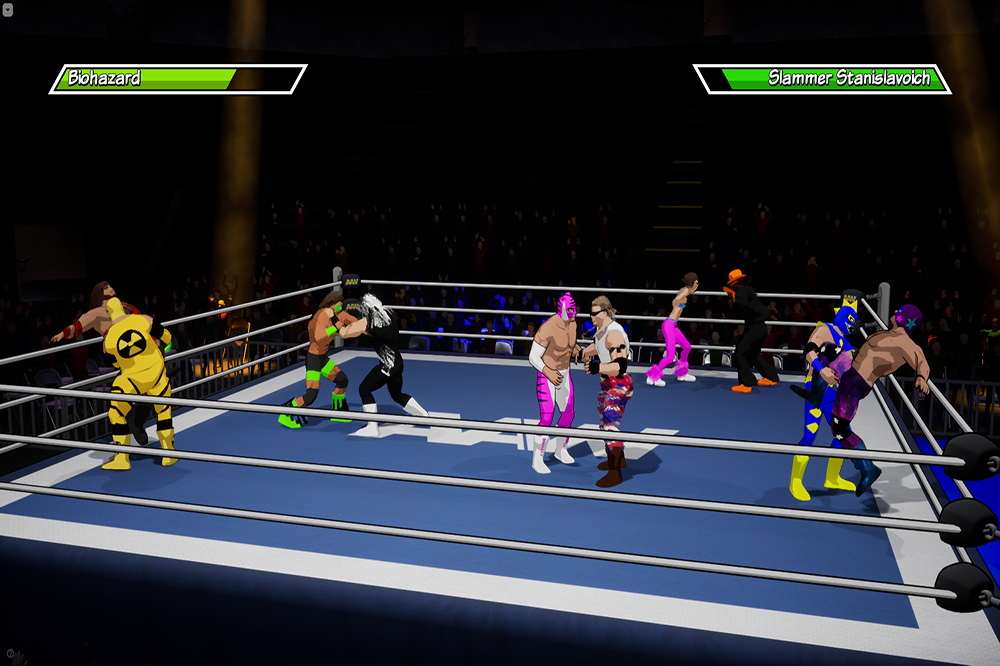 I review games on a scale of 1-10; Action Arcade Wrestling for the Nintendo Switch is an 8. If you like 90s wrestling games and hold them warmly in your memory, then this is a no-brainer purchase. That said, younger gamers might be a bit taken aback by the simplistic controls and visuals. Yes, kids, this is what our games looked like. Not only did VICO Games do a great job modernizing this nostalgic experience but it’s more fun than any wrestling released in the last five years – maybe more.

With plenty of room to expand its great original roster, this game has the legs to become a couch co-op favorite for hundreds of hours. It’s also plenty fun as a solo fighter, so what are you waiting for? Go get in the ring!

Action Arcade Wrestling is available now for the Nintendo Switch. If you play this game, then let us know what you think in the comments! Additionally, I’d love to hear what Wrestle Lab characters you’ve played or created! Likewise, let us know what you thought of our Action Arcade Wrestling review and ask any questions you have down below! All hail the Vending Machine.

A digital review code for this game was provided by the publisher for the purposes of this review.