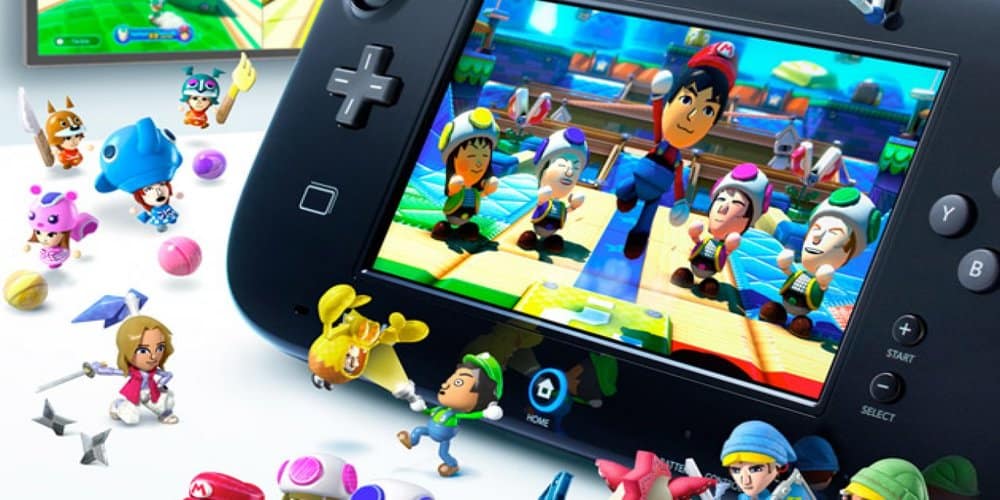 On the Wii, purchasing the console also brought Wii Sports. The game brought a lot of gamers together with people who don’t really play games at all. By the time the Wii U launched, everyone was confused about what the console actually was. The poor marketing hurt the console’s sales overall, but we did get some great games. One was the bundled title accompanying the console in the box: Nintendo Land. A lot of people didn’t get a chance to try this one out, and it’s truly a lost hit from the Wii U days. Here’s my Nintendo Land retro review for a game that really outperformed most modern Mario Party games.

Once the Wii proved to continue to sell insanely well, developers at Nintendo decided to make another game, Wii Sports Resort. Again, the game was a hit. Once the release of Wii Sports Resort started out strong, Nintendo looked to develop another casual game. Instead of developing the title for the Wii, the company turned its sights to a new console which was not yet finished. A few prototypes, however, informed design choices, including the implementation of a touch screen that interacts with the TV. Nintendo knew it wanted a two-screen experience, much like the Nintendo DS, and the soon to release 3DS. The use of gyroscopes was heavily favored by Shigeru Miyamoto. Miyamoto even went so far as to include the tech in the 3DS.

The game’s goal went beyond being a casual game to play with friends. Nintendo Land was also meant to show all the Wii U could offer players. The games would not be connected, but simply exist as a collection like Mario Party. The only uniting factor was each game would use some inspiration from other Nintendo games. The concept at first seemed way too ambitious, but later the idea of a theme park helped catapult these wild brainstorming sessions into a plausible game approach. 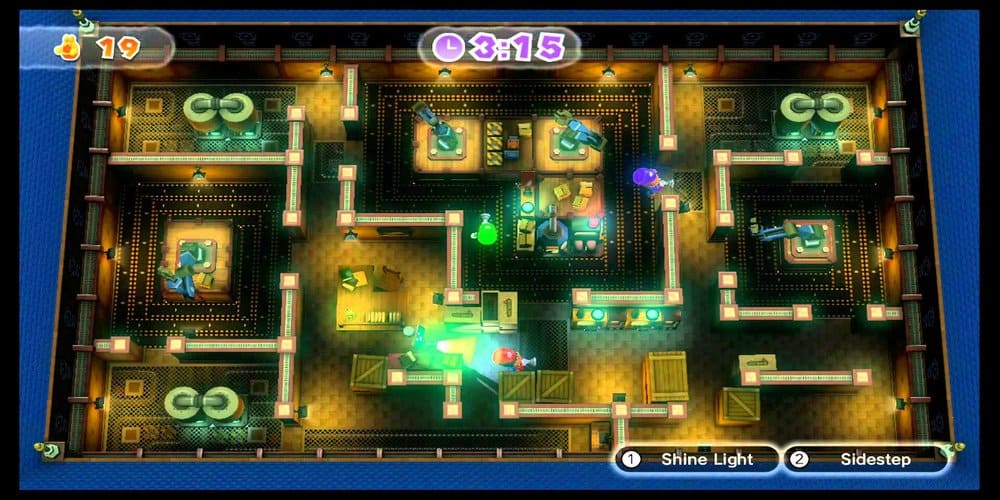 Only featuring 13 mini games, the main feature of Nintendo Land is the concept of an amusement park. Essentially, the goal of the game was to introduce players to the use of the Wii U Gamepad. As much of a failure as the console was as a whole, the Gamepad peripheral worked very well. Without it, we wouldn’t likely have the Nintendo Switch.

Players can enjoy 12 mini games, which utilize three different game styles. In some, you play solo and attempt to achieve high scores and beat records. In other games, you battle it out against one another. Lastly, three games allow you to team up with friends to take on challenges together. The 13th option for play is an Attraction Tour that serves as a tournament for all mini games.

One important element to mention is the use of the Wii controllers. The Wii Remote Plus and Nunchuk both worked in games, and are needed to play with multiple people. You can see where some people confused the Wii U for a new controller, and not an entirely new console. Still, it’s nice to be able to use a previous console’s controllers in a new generation. We don’t see that happen very much.

Of the 12 mini games, I think three really stand out. Let’s talk about them a bit. 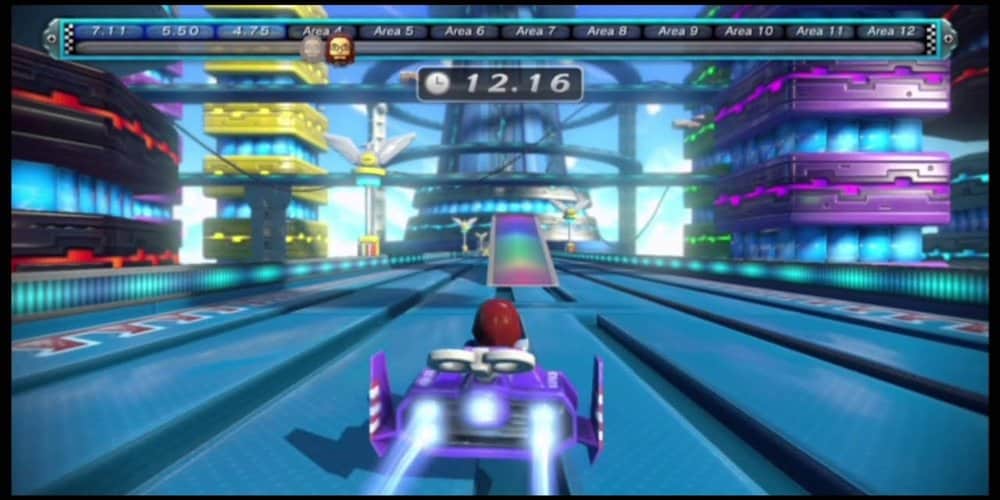 One of the solo mini-games, Captain Falcon’s Twister Race, is a seriously fun time. Based on the game F-Zero, the player drives on a track avoiding obstacles and trying to make it to the finish line. Players use the GamePad to steer the vehicle, which works incredibly well. From the GamePad screen, you can see an aerial view of the track to pinpoint where upcoming obstacles are placed. On the TV, you see a third-person view like traditional F-Zero games. Once mastered, it’s really a matter of clearing the track as fast as possible. If anything, it makes me want a new F-Zero game. 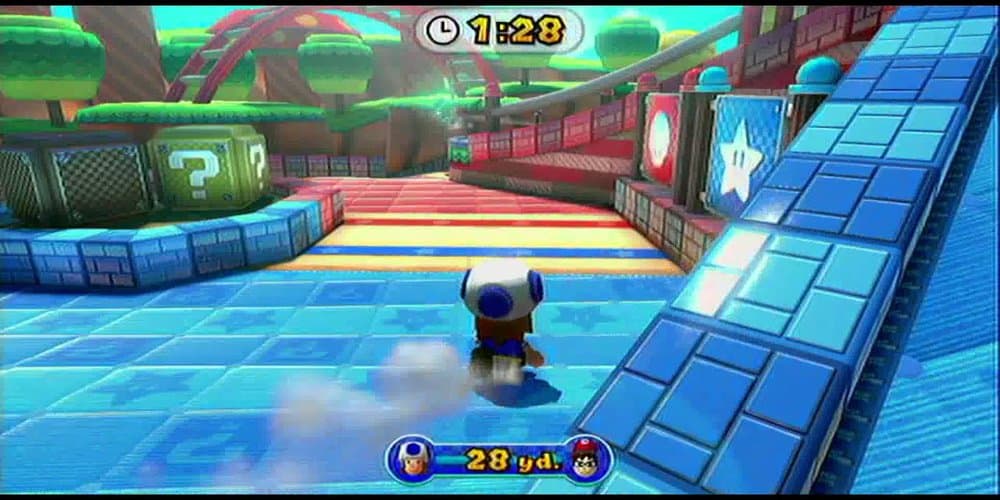 One of the competitive games is essentially tag but in the world of Super Mario. Using the GamePad, one player is dressed up as Mario, and tries to stay away from up to four others, dressed as Toad. Cornering the Mario player is all about teamwork, and each screen provides a different perspective. From the GamePad, the Mario player sees the map from the top-down, with all Toad characters visible. On the TV, the Toad players see a split-screen perspective of their character. This keeps things fun and doesn’t allow any advantage to the Toad characters. The only help these hunters get is a distance calculation of how many yards they are away from Mario. The goal is to find Mario before time expires. When playing with a fun group, this game seriously gets intense. 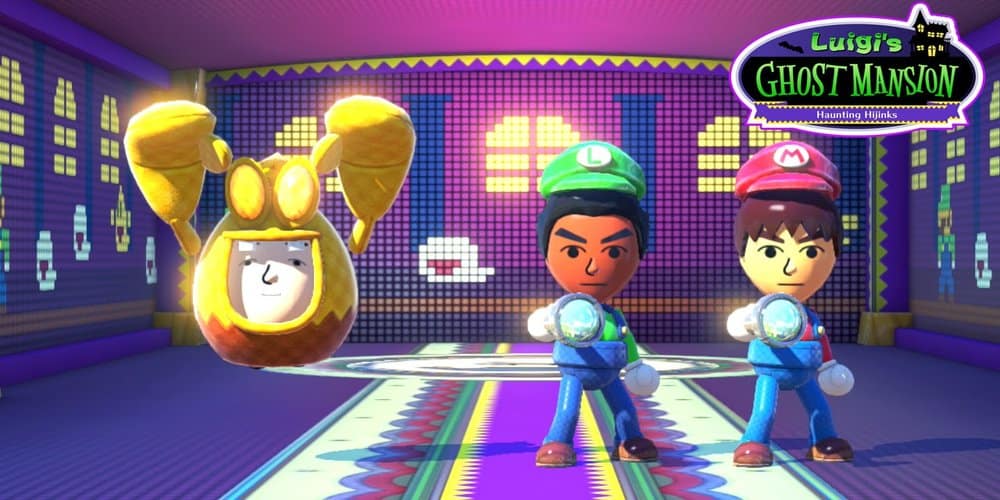 I think Luigi’s Ghost Mansion is the most fun game in this entire Nintendo Land retro review selection. Inspired by Luigi’s Mansion, the core idea is not unlike Mario Chase. Up to four players dressed as Mario, Luigi, Wario and Waluigi hunt a ghost, who is in charge of the GamePad. The fun element to this is instead of a flat map, there are different rooms and areas of the mansion in which the ghost can hide. As hunters find the ghost, they use their flashlight to damage the ghost, who has a health bar of 100 HP. If the ghost sees a hunter without being given away, they can scare the hunter and make them faint, disabling their movement for a short time. To come back in the game, other trackers must revive their fallen partners.

A lot like the Mario Chase game, the GamePad is used to keep an eye on everyone, while hunters use split-screen views on the TV. Hunters also get a distance tracker like Mario Chase. Players have to manage their flashlight power, picking up batteries if they run out of power.

Nintendo Land Retro Review – Will We See a Port to the Switch? I Wish

Of all the games making their way to the Switch from the Wii U, I wish there was a way to make Nintendo Land work. If players had enough Joy-Cons, they could have their friends play. I don’t think this game is high on Nintendo’s list of ports, however. If the game sounds fun to you, then I’d recommend picking up a Wii U on the cheap. Some are as low as $40 used with the GamePad.

If you want to see more lost hits from the history of the Wii U, then let us know in the comments! Thanks for choosing Comic Years for all things gaming, comics, and pop culture!