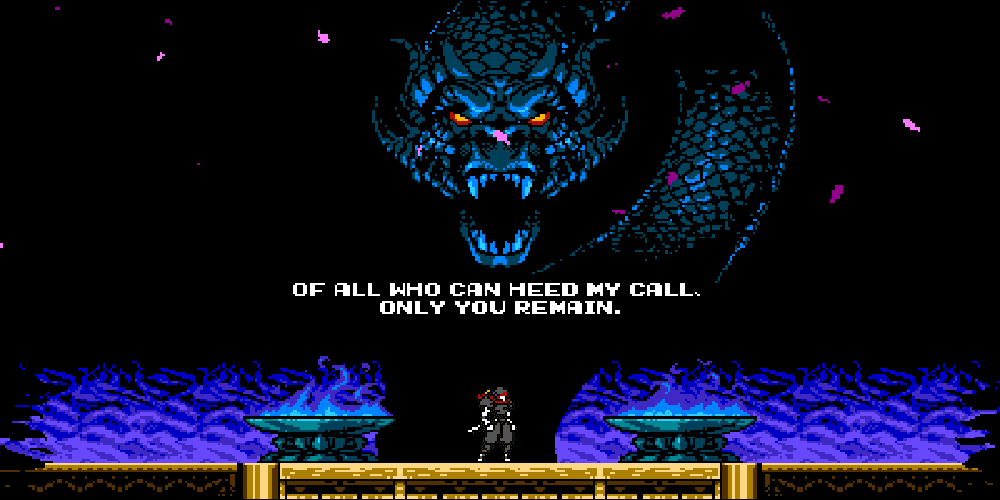 There’s an element of retro-style games that goes unnoticed by the larger gaming community. These games that depict titles of the 80s and 90s aren’t just nostalgia trips. Overall, these games need to accomplish the best of the past and the demands of the future. It’s not enough to rely on 8-bit graphics to curb excitement from a certain audience of gamers. You also can’t simply reciprocate the gameplay elements we know and love from the era. In short, I find it rare that a developer nails both the visuals and gameplay of this genre of game. That said, Mechanical Head Studios accomplishes this delicate balance with Cyber Shadow. The game, published by Shovel Knight team Yacht Club Games, is a love letter to some of our favorite action-platformers. Here’s our Cyber Shadow review of this new release that we’re calling the first indie gem of 2021.

Inside the Surprisingly Captivating World and Story of Cyber Shadow 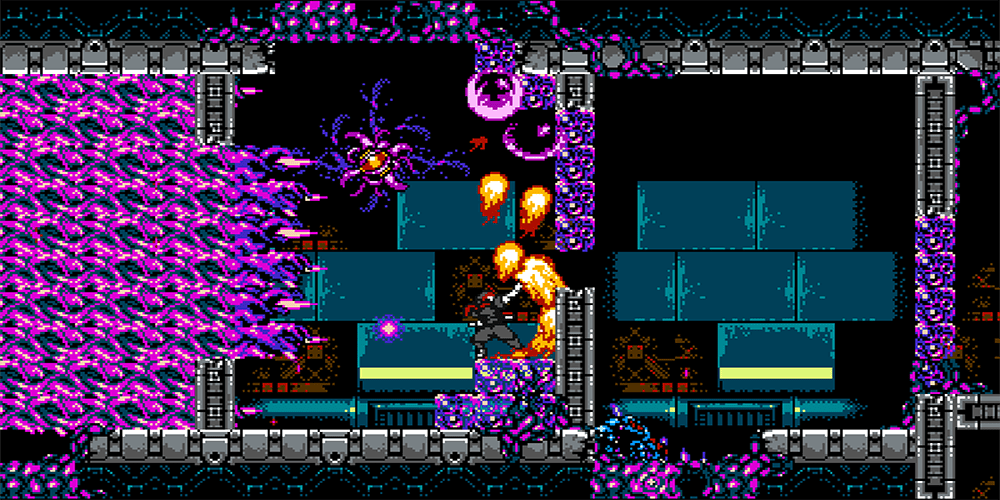 In Cyber Shadow, the world is falling apart. On second thought, it fell apart, and now an evil figure named Dr. Progen rules all. His army of synthetic protectors guards the run-down Mekacity, which exists as a ruin of rubble. Shadow, the last member of his clan, is set on figuring out what happened. As a cybernetic ninja, Shadow has abilities that prove to be quite effective against the synths. The journey forward is one of mystery and systems of power well beyond your first instinct. It’s surprisingly great, both as a narrative and a world.

All credit goes to Aarne “MekaSkull” Hunziker, the one-man developer who brings us Cyber Shadow. In a great interview with Sony, MekaSkull explains that he started his work on the game with a “training” program for people interested in game development. He began the program in 2014 and initially intended the game to be a six-level experience. As he began to fall in love with the process, the game turned into a much larger undertaking.

While these elements might not be directly related to me writing this Cyber Shadow review, I think the story is too great to omit. All credit and kudos to MekaSkull, and of course, to the publisher Yacht Club Games. The latter’s work on Shovel Knight launched a resurgence of titles like these. MekaSkull even notes the game’s influence on him before he began work on Cyber Shadow. Of course, we’re happy to see this story turn out so well, given the quality of the game. Speaking of, playing this game is just as great as hearing about MekaSkull’s success story. Now, let’s talk about the gameplay and visuals. 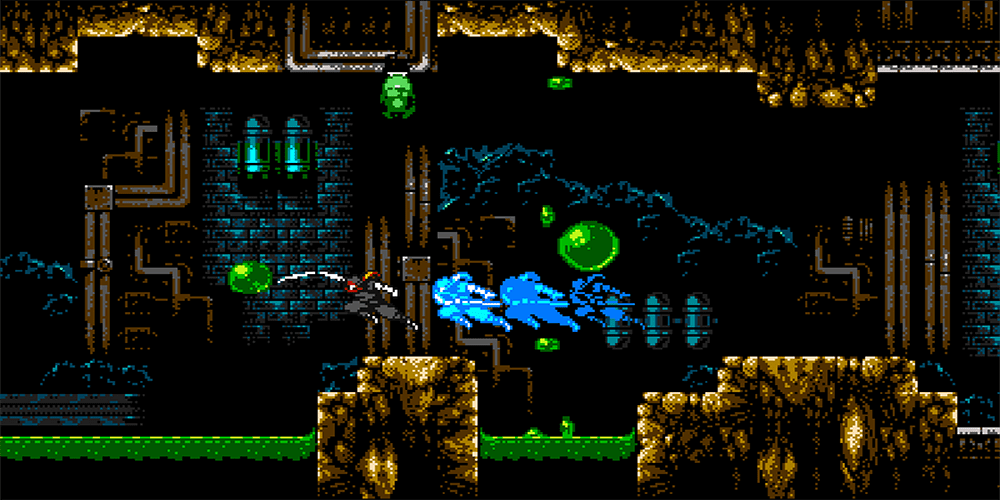 The 8-bit style graphics of the game are the first eye-catcher. As you look closer, the details and attention put into creating unique sprites is quite remarkable. I love the way this game looks, and honestly, it’s led to me watching a lot of videos of people playing the game. The retro-style visuals are great but match well with modern presentation elements. Features like fluid animations and multilayered backgrounds give this game a very modern feel. It’s truly the best of both worlds.

As Shadow, you traverse Mekacity’s cyberpunk-style environments. You can dash, slice, leap, and fight your way to figure out why the city fell apart. Because you’re fighting as a one-person army, the game can feel quite overwhelming at times. Overall, this is a good sort of overwhelming. There are moments early on where I felt very stuck on a section of a level. If you learn Shadow’s moves more precisely, then you do have everything at your disposal to progress. As you obtain better attacks, the game only gets more enjoyable. Fun platforming elements like wall slides and jump strategies keep you thinking every step of the way. Likewise, every new attack or weapon feature makes the game more exciting and addicting.

Enrique Martin’s soundtrack is the perfect backdrop for this game. If you’re someone who enjoys action-platformers, then I think the soundtrack, in particular, is a high point. As you discover why you’re the last person standing in your clan and the city’s fate, the music amplifies your experience. Like I wrote in my Carrion review, it takes a lot to nail every element of a game. Cyber Shadow accomplishes this daunting task with ease. 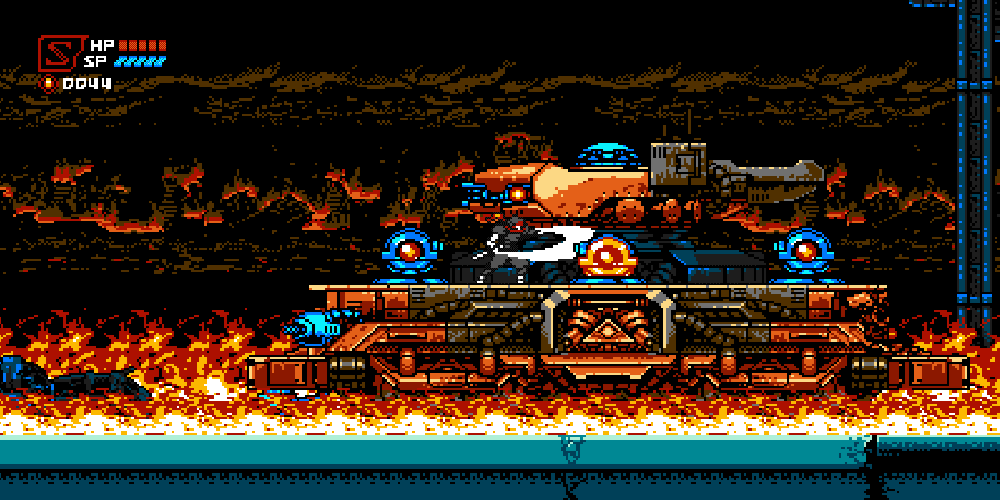 I review games on a scale of 1-10; Cyber Shadow is a 10 for me. There wasn’t an element of this game I didn’t love. I can’t really speak highly enough about it, and here’s why. I find myself highly critical of these style of games. I’m not someone who has a ton of adoration for 8-bit graphics. I enjoy them aesthetically but as a gamer, they only do so much for me personally. I found the more modern effects added into the retro feel of Cyber Shadow to be highly effective. Of course, the game can’t just look good, it has to be fun. This game is fun to the point that I can see myself revisiting it often. Action-platformers tend to be a one-and-done for me, but not this one.

It’s not lost on me that giving a game in January a 10 might seem misguided. When I break down the elements of this game just as I did in this review, there’s no other score that fits the enjoyable, euphoric experience of playing this game. It’s a joy every step of the way, and I hope you check it out. If you’re a fan of action-platformers and retro side-scrollers, then this is a must-have.

Cyber Shadow is available for Nintendo Switch, PlayStation 4, Xbox One, PlayStation 5, Microsoft Windows, Linux, and Mac. The game runs $19.99 USD. If you get a chance to check this game out, then be sure to let us know your thoughts in the comments!

A digital copy of Cyber Shadow was provided by Yacht Club Games for the purposes of this review.

The Most Expected Comics In 2021 For Teenagers
Could A Skull Island And Tomb Raider Anime Become An Expanded Kaiju Universe?