Pride Month Graphic Novel Spotlight: You Brought Me the Ocean 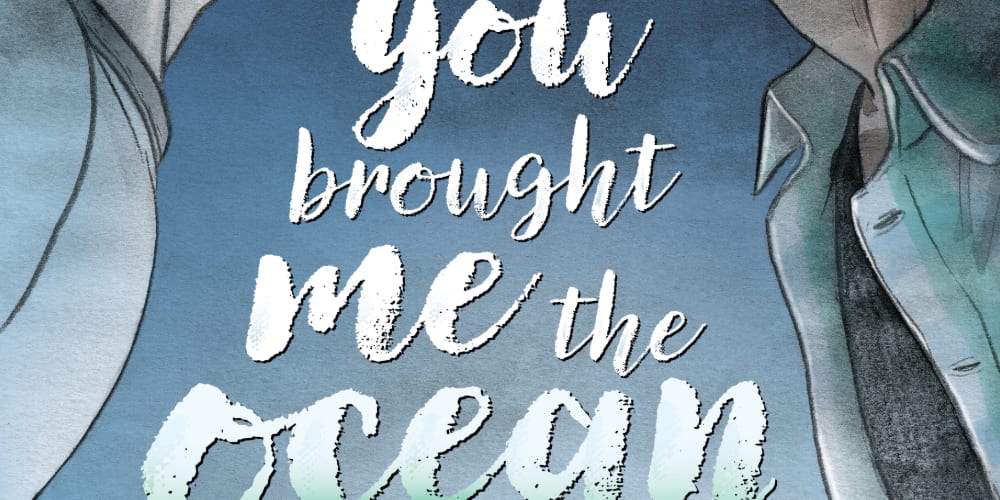 DC Comics’ YA graphic novels are some of the company’s best work lately. Wonder Woman: Tempest, Teen Titans: Raven, The Oracle Code, and Superman Smashes the Klan (a middle-grade graphic novel), explore important topics in brilliant ways. And earlier this month, we got another great YA graphic novel: You Brought Me the Ocean, by LAMDA-winning author Alex Sanchez and New York Times bestselling author Julie Maroh. Together, they’ve created a teenage coming of age love story that will move anyone reading to tears (of joy).

The Legendary Queer Creators of You Brought Me the Ocean 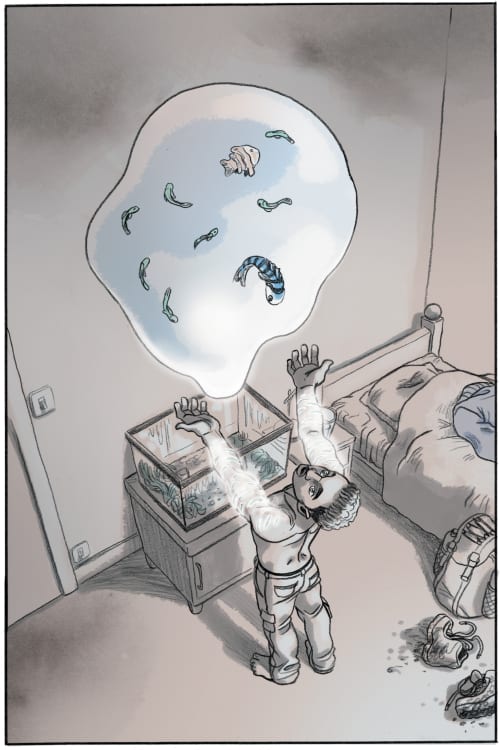 And you thought your pets could do cool tricks. (Image: You Brought Me the Ocean, DC Comics)

Both creators, separately, are powerful voices in the LGBTQIA+ community. Sanchez’s YA series, Rainbow Boys, won several awards. Some of his novels ask very complicated and deep questions, such as The Gold Box, about a young man trying to reconcile his Christian beliefs with his homosexuality. And as we learned from Pastor Noah in Queer Eye’s Philadelphia season, this is a much more common identity crisis than people are aware of. But it was his novel Bait, about a troubled teenage boy on probation finally getting the therapy he needs, that won him the LAMDA Award. His writing in You Brought Me the Ocean is no less amazing.

The artist, Julie Maroh, is one of France’s most creative residents. While they have several notable works, they are most famous for Blue is the Warmest Color. Blue follows a young French woman who falls in love with a mysterious blue-haired girl. Their romance is compelling, heartbreaking, and entirely captivating. Maroh’s art style is indeed warm, regardless of the coloring. Their linework is inviting and comforting without sacrificing the intensity of the narrative. Maroh was the perfect choice for You Brought Me the Ocean.

Together, Maroh and Sanchez are a dynamic team—and hopefully, they will work together again. 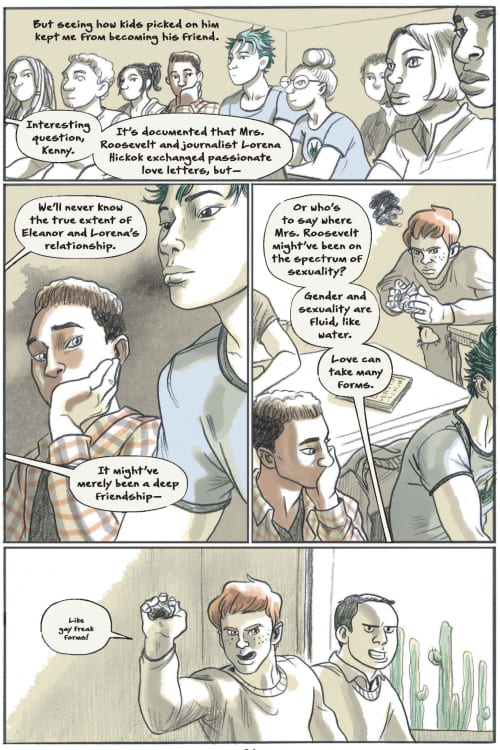 Jake’s school still has the same homophobic bullies that used to be much more prevalent, and sadly still exist. (Image You Brought Me the Ocean, DC Comics)

Jake and his mother lived in Truth or Consequences, New Mexico, for his entire life. It’s a small town of sand and silence. The biggest thing to happen to their town was when a young man, Kenny Liu, came out in middle school. So, it’s understandable that Jake wants to hide as much of himself as possible, like his strange birthmarks that run up and down his arms…and glow in the water. And the fact that he is gay, which he even hides from his best friend, Maria. Maria, however, wants Jake to go from her best friend to her boyfriend. Obviously, this causes a bit of drama between the two lifelong friends.

But aside from his strange markings and sexual identity, Jake is hiding another secret—he wants to leave Arizona and move to Miami to pursue oceanography, even though he’s never actually been to the ocean. There’s a reason for that, though. His mother keeps him away from the water. His father drowned when Jake was just a baby, making his mother overprotective…or did he? This is a superhero story, remember.

You Brought Me the Ocean: Relatable for High School Students, Harsh Reminder for Adults, Warning for Preteens? 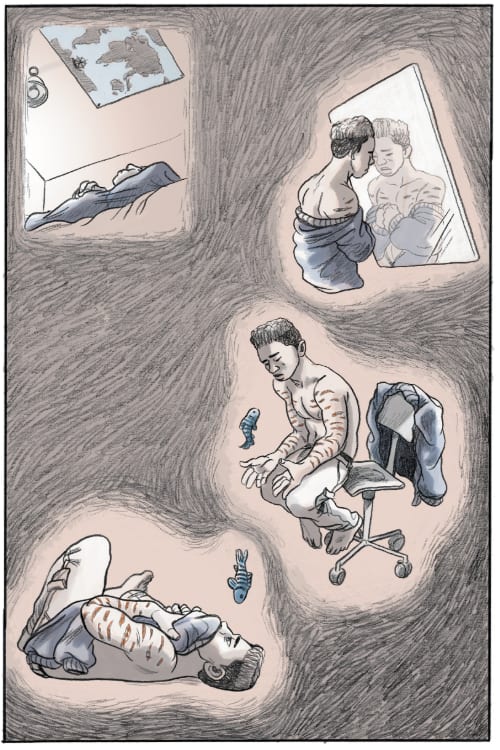 Way too much on the mind. (Image You Brought Me the Ocean, DC Comics)

Most of us adult readers probably block the majority of our time in high school. High school is mainly a weigh station from puberty to adulthood. It’s a cruel social experiment, putting hundreds of teens into one building, cramming classrooms with as many as possible, and putting them at the mercy of underpaid and overworked teachers. Most of my first-year college students say that, aside from actually having to work for their grades (not their previous teachers’ faults, but our failing education system), college is much easier than high school. And You Gave Me the Ocean demonstrates just how much high school indeed sucks.

At the center of the graphic novel, pulling the strands of a) sexual identity, b) planning the future, and c) a changing (in this case, glowing) body, are hormones. While as adults, we all have multiple crises happening at once (like DC Comics itself every few years), we get our first dose of that in high school. And boy, does that experience screw with us. The confusion, the anxiety, the, um, concupiscence (word of the day!)…it’s the stage of puberty they don’t teach. Oh, all of those emotions, feelings, and thoughts you’ve been having. Well, now you’ll have them all AT THE SAME TIME! 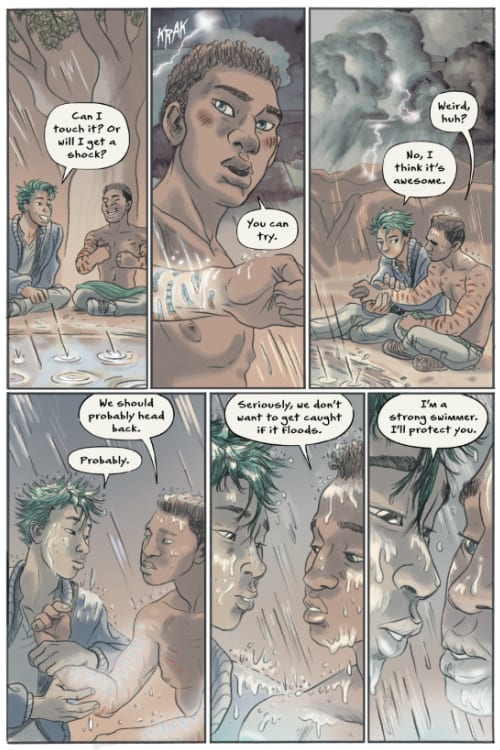 I wish I were this cool for my first kiss. Poor April…(Image You Brought Me the Ocean, DC Comics)

Since Jake is not your average human, he gets to add “what if someone catches me glowing?” on top of “what if people find out I’m gay?” This poor kid has a lot stacked against him in his little town. The one student who did come out, his crush Kenny, is constantly picked on. But Kenny doesn’t let it bother him—he just throws it right back at them. Jake doesn’t have that confidence yet. Then there’s his friend Maria. Jake is painfully clueless about how she feels about him, but he’s also so worried about jeopardizing their friendship, he keeps important secrets from her. To make matters even harder, Jake has a helicopter mom to the nth degree. Granted, you find out she has good reason.

Through his internal monologue, dialogue with other characters, and his manerisms, Maroh and Shanchez create one of the most genuine teenage psyche experiences in the entire DC YA line so far. It’s an authentic experience…with superpowers.

You Brought Me the DC Universe 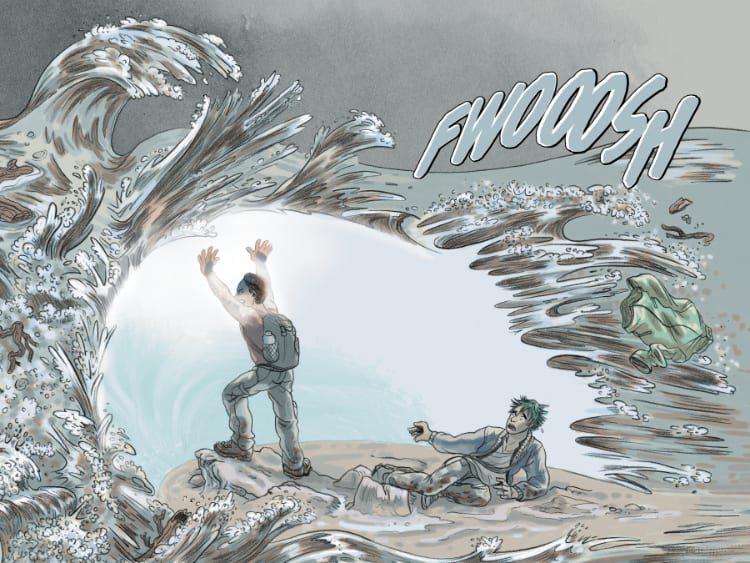 First kiss AND superpower manifestation?! Best. Date. Ever. (Image You Brought Me the Ocean, DC Comics)

Oddly, this is also the most fanciful and DC Comics-oriented one too. Oracle Code and Teen Titans: Raven both steered away from the more prominent superhero aspects. Wonder Woman: Tempest Tossed reimagines her apart from the rest of the DC Universe. But in You Brought Me the Ocean, we get Superman and Aquaman doing Superman and Aquaman things—even if it is just on TV. They are still very much part of this world. And Black Manta does typical supervillain things. In fact, You Brought Me the Ocean could be canon if DC Comics felt like it.

Here we have a queer Black teenage boy in a small town. The characters are grounded not in reality, but relatability. And then we have the superhero backdrop. The result? Superheroes have never felt more real. Jake’s “condition” and discovery of his own powers didn’t take any suspension of disbelief, at least no more than watching a movie like Moonlight or Brokeback Mountain. It took the idea of “what would a world of superheroes really look like,” that Christopher Nolan, Zack Snyder, and Alan Moore ran with, but instead of going to dark, You Brought Me the Ocean is a bright spot in superhero realism.

Teachers, assign this to your students. Parents, buy it for your kids. Comic fans…just buy it. It’s too wonderful to pass up.

(Featured Image: You Brought Me the Ocean, DC Comics)