Who is Ms. Marvel? The MCU's Newest Superheroine

Home » COMICS » Who is Ms. Marvel? The MCU’s Newest Superheroine

Who is Ms. Marvel? The MCU’s Newest Superheroine

Ms. Marvel is a little-known comic book character, but now she has her show on Disney’s streaming platform. This female superhero is the new addition to the Marvel Cinematic Universe. When you hear Ms. Marvel, you likely think of the character we saw in The Avengers: End Game (2019). However, we clarify that it is not the same person, although they have a certain relationship. Ms. Marvel is a classic character whose first appearance was in 1977, although now will become worldwide popular for having her show on Disney +. Let’s learn more about this amazing superhero.

Who is Ms. Marvel? 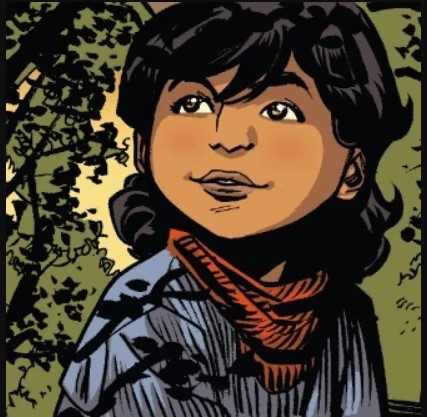 If you want to know this character, let’s first clarify that this is not the character we saw in the Avengers. Certainly, she was conceived to be the counterpart of Captain Marvel but soon started her own stories. The character we will see this time is the different, younger, of different ethnic origins, and with other powers.

Ms. Marvel, or her secret identity Kamala Khan, is a 16-year-old Pakistani-American who moved to New Jersey in the United States with her family. She lived a semi-normal life, following the Muslim rules and traditions and religion followed by her family. Kamala has few friends due to her Muslim culture and the impositions placed on her by her family.

She escapes to a party and is exposed to a terrifying fog, as is the whole city. This event enveloped her in a cocoon, where she dreamed she met Iron Man, Captain Marvel, and Captain America. They would ask her what she wanted to do, and she answered that she wanted to be like Captain Marvel. She woke up with a uniform similar to this one and noticed that she had the powers to change the shape of her body at will.

This character has these powers because she possesses genes from beings that are not human. These include supernatural powers, and the moment she had contact with the mist, she awakened them. They are very similar to those possessed by Mr. Fantastic of The Fantastic Four. 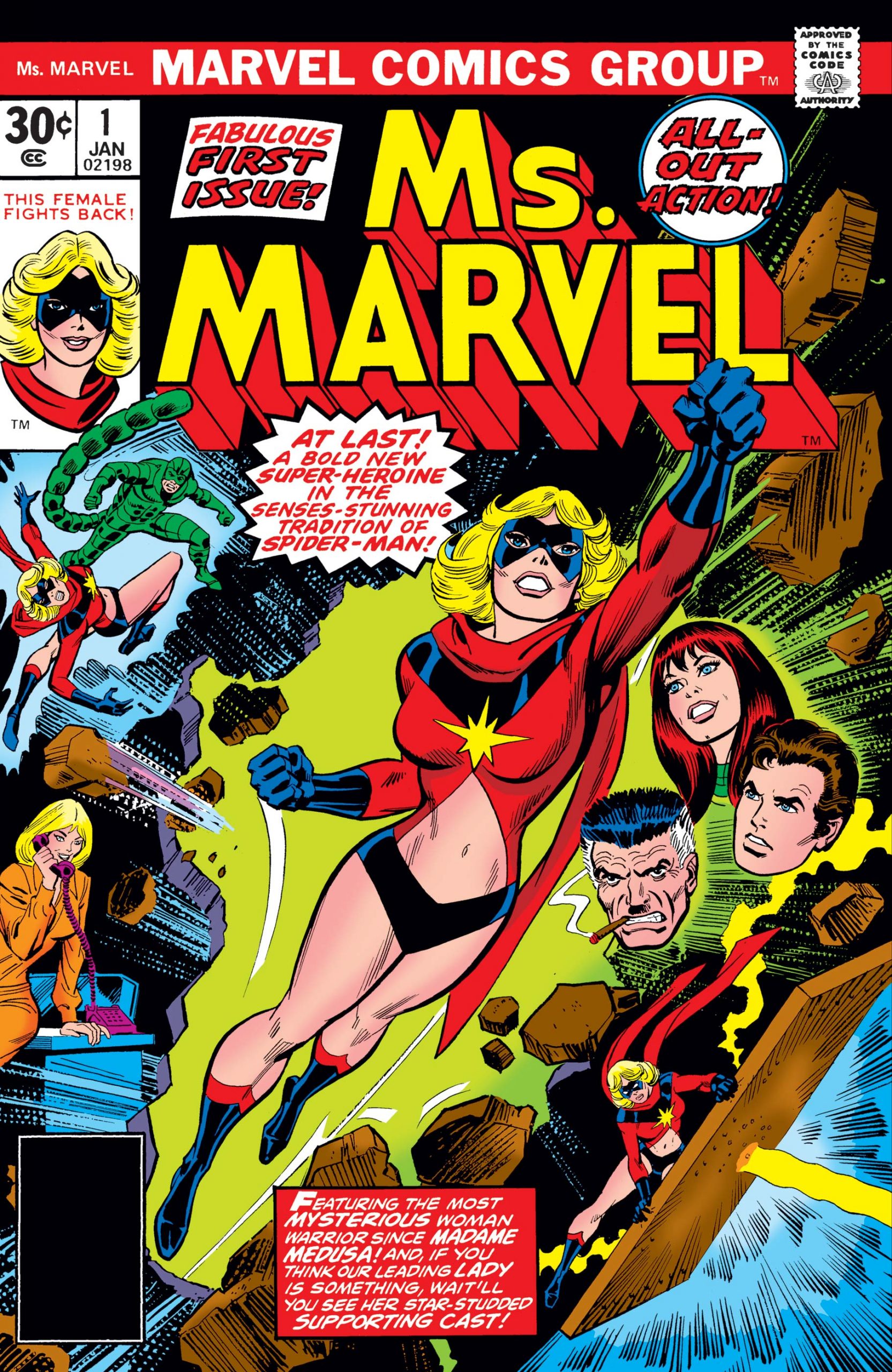 As mentioned, Ms. Marvel is a Pakistani-American character who emigrated to the United States with her family. She follows a rather strict life by the rules of her parents and the Muslim tradition. She meets Nakia Bahadir at school, who becomes her best friend and has an affinity with her because they are both Muslim immigrants.

Later she would meet another immigrant, but of Italian nationality, Bruno Carrelli. The teacher explained to Kamala’s parents that this boy was having a hard time. The boy’s mother lost custody of him, and he was in the care of his grandparents, who did not have enough money to support him or even pay his school fees.

Although the Khans initially refused to pay for Bruno’s schooling and support him, they agreed to pay for his education and help him. The protagonist would have a great affinity with her classmate because of their common elements, such as their situation when they emigrated and their love for video games and the Mutant Samurai Turtles series. 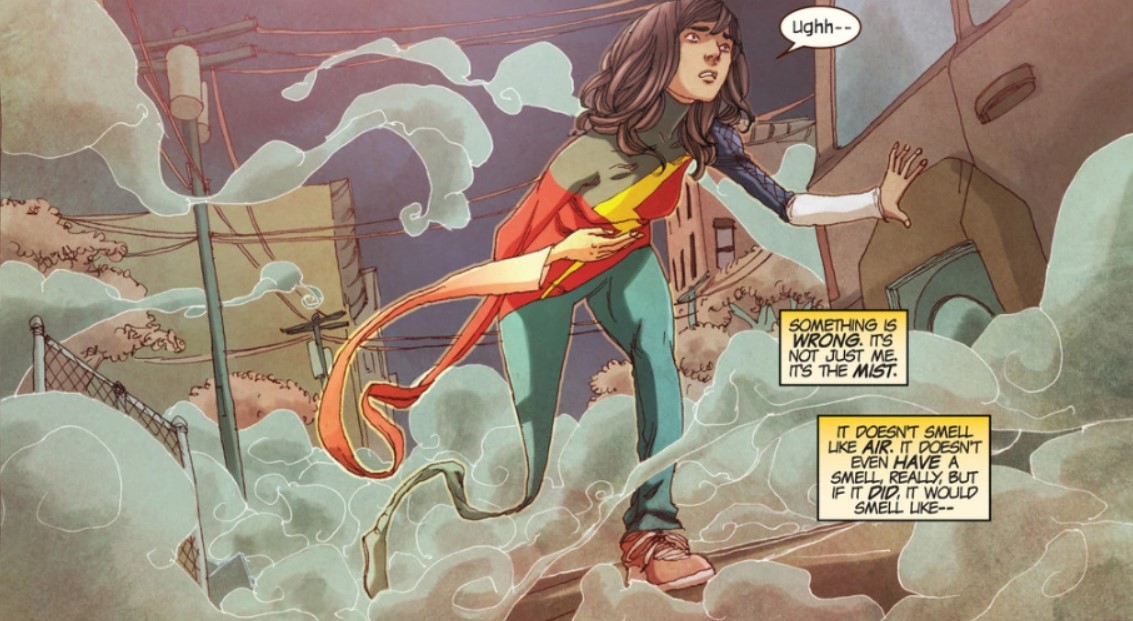 Kamala’s social life was almost non-existent, not only because of her family’s impositions but also because of her classmates’ teasing. At school, she was teased by her classmates because of her race and the beliefs of the girl and her family. This situation causes her to seek acceptance, going to a party without her parents’ consent. However, her classmates made fun of her at the party, causing her to leave. She was sad, although she did not imagine that her life would change dramatically on that day.

Upon waking up, she realized she had some costume, just like the hero she admired, and also discovered that she possessed great power. She realized that she could change the shape of her body to any shape she wished. She was trying to control her emotions and new powers at that moment.

Using her Superpowers in Public

She would return to the place of the party and see how the boyfriend of one of her companions, in a drunken state, pushed his partner into the river. She instinctively stretched out her arm and saved her before she touched the surface and hurt herself. This event caught the attention of the New Jersey community, especially the press, who were stunned.

The new heroine fled the scene and headed home to think about everything that had happened. She meditated for a long time, analyzing that being like Captain Marvel was harder than she thought. It wasn’t just about having the powers. It was about helping others, even if you didn’t like them because of how they acted.

She would think long and hard about how she would use her powers, even though she wouldn’t have much of a chance in the future. This to a punishment imposed on her by her parents when they learned from Bruno that Kamala would have attended the party. This behavior resulted in her inability to go out, although it didn’t stop her from experimenting with her powers and learning how to use them. 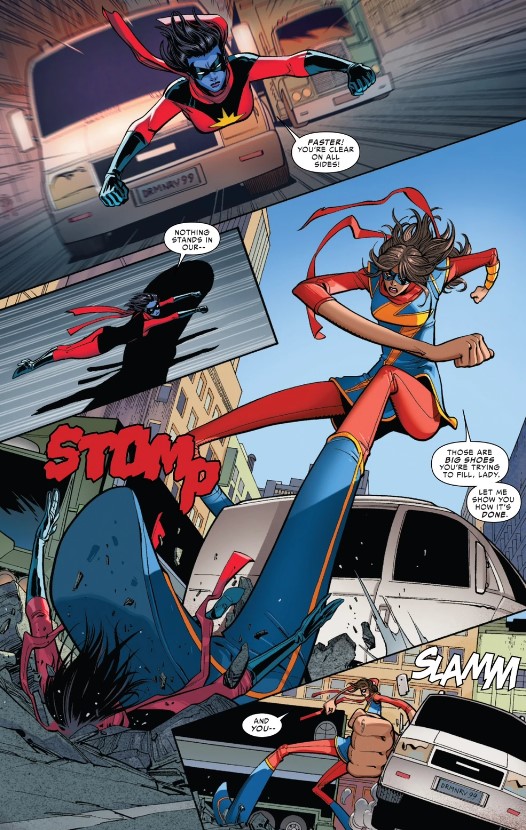 Kamala’s beginnings as Ms. Marvel come right after her punishment ends. She goes to a store where her friend Bruno works to visit him to resume her friendship with him because of what happened at the party. At that moment, a thief enters the store, causing her to forget about her reconciliation plans and try to stop the thief. However, she would get shot, protect Bruno, and discover a second power. This one allows her to heal when she returns to her normal appearance, the bullet wound disappearing.

In doing so, her friend Bruno exposed her identity, who thanked her and explained that the thief who broke in was her younger brother Vick. He had hooked up with a dangerous person known as The Inventor. She worriedly went to her first encounter with the villain but failed, as she was cornered by his mechanical spiders, manned by an army of henchmen he possessed.

Kamala took her role as a superhero seriously, developed a new suit to fight the villains, and trained with Bruno to master and develop her powers. After that, they returned to attack the Inventor’s lair, being able to rescue Vick but gaining the villain’s grudge.

More fights with the Inventor 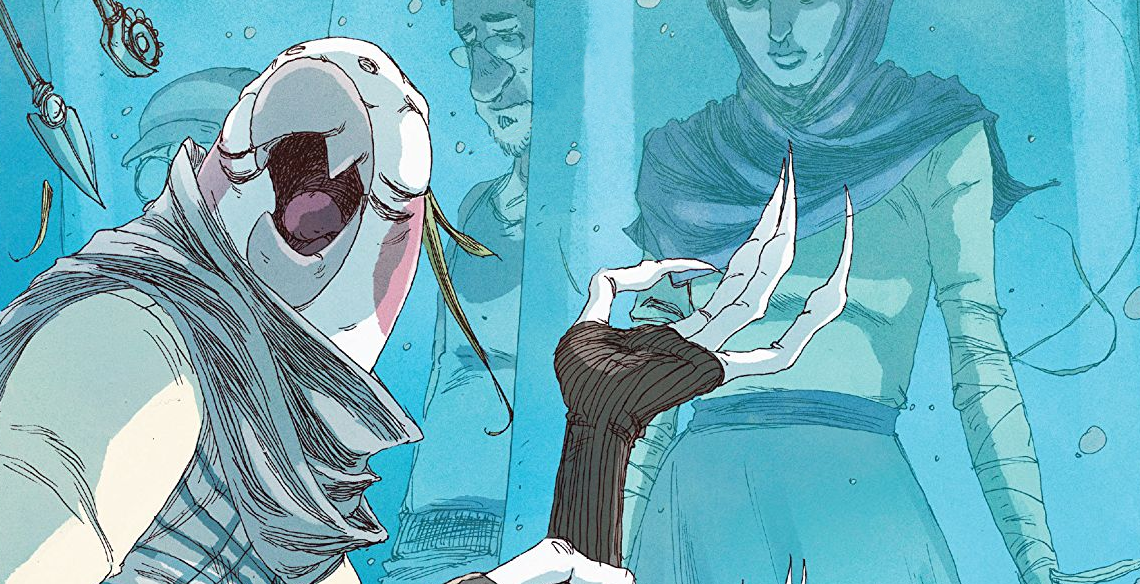 After her first fight with The Inventor, Kamala had several encounters with his machines. On one occasion, she heard a strange sound and went to the sewers. There she encountered the villain, who turned out to be a monster created by accident by a scientist named Gregory Knox. He wanted to clone Thomas Alba Edison. However, his pet bird accidentally suffered a mutation having Edison’s intelligence. He used this attribute to attack the city and cause terror in the population.

The Inventor sent mechanical alligators to attack Ms. Marvel, but Wolverine saved her. He was looking for a fugitive student, and after confronting several robots, she was found and rescued. The student was being used to feed one of the machines of this villain. Wolverine realizes that Kamala is part of Inhuman and warns Medusa about this, causing her to send Lockjaw to guard her.

Kamala grew fond of Lockjaw, taking him into her home. The heroine confronted another robot finding another young boy inside, subsequently taking him to the hospital. The problem was that she left a trail that the Inventor took advantage of to send a robot to her school and seriously injure her. This could not be cured by herself because of the severity of her wounds, being teleported by Medusa and cured by another inhuman.

At that moment, Medusa reveals to her that she is not human but has inhuman genes. Despite Medusa’s reproach, Kamala is surprised and decides to finish off The Inventor by herself. She goes with Lockjaw, freeing the teens from the villain’s control and confronting him. The heroes and the teens subdue the robots and The Inventor himself. Miss Marvel calls Bruno, who calls the authorities, and they lock up the Inventor, putting an end to the fight and Kamala’s normal life. 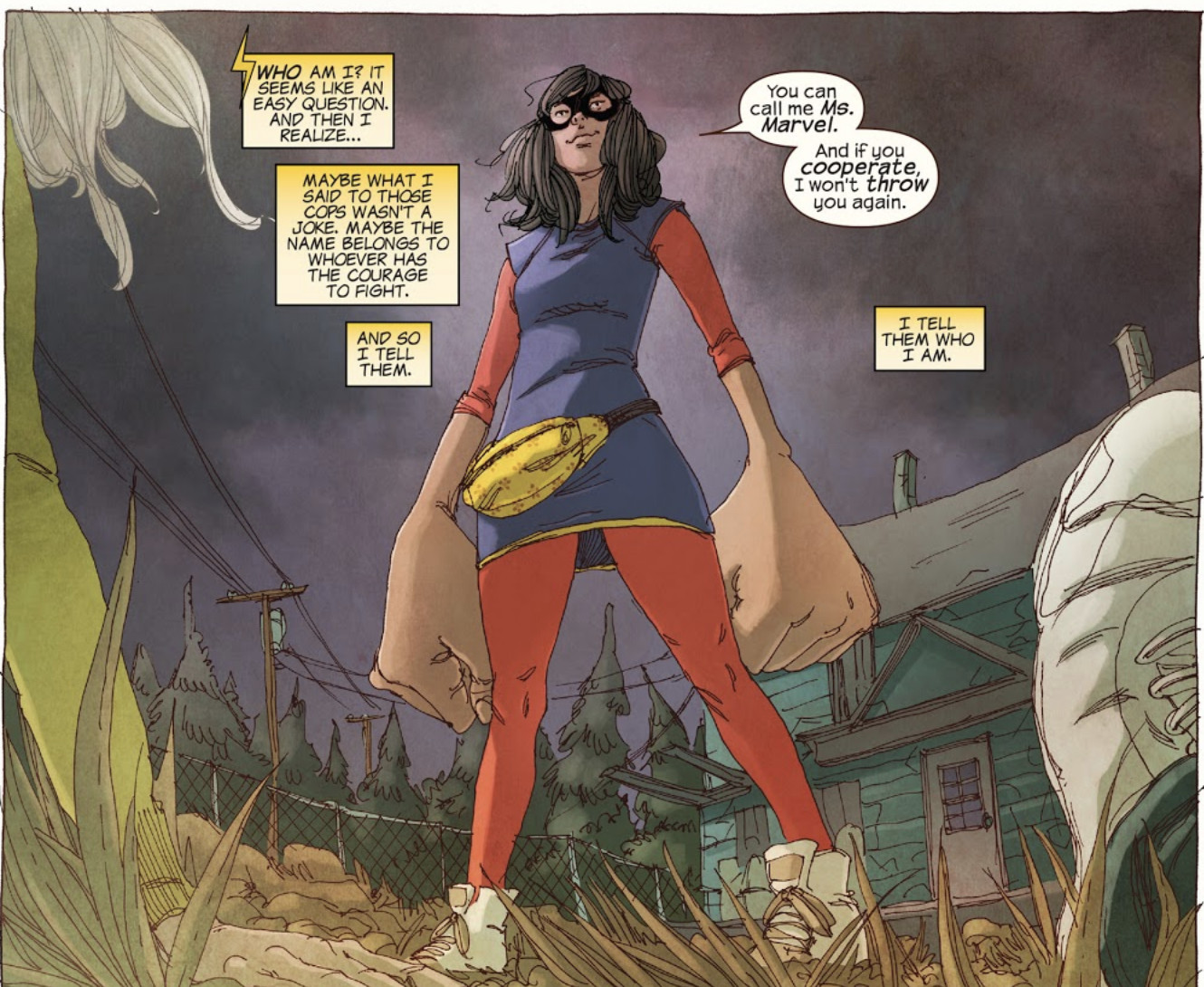 Ms. Marvel’s powers and abilities are various, starting with her polymorphic ability, which allows her to change into the form you want. She can also increase the size of her fists for greater strength in melee battles. Additionally, he can increase and decrease his size. He has another polymorphic ability to extend his legs to cover great distances.

Another ability she possesses is wound healing, changing from her heroine identity to her normal identity. This ability can heal wounds, although it has limitations regarding healing speed.

Bioluminescence is another quality, as she emits light when she activates her polymorphic powers.

Although Ms. Marvel does not use weapons, she does have some accessories to mention. The first is a special suit that was developed by her friend Bruno. The suit was developed with a Biokinetic Polymer that becomes malleable when in contact with elastic or malleable material. This feature makes the heroine have to concentrate less on stretching her outfit. The suit has only one weakness, and that is that it is damaged by contact with water.

Another useful item is a bracelet she has on her left hand. It belonged to his grandmother, who uses it to keep his cell phone and other everyday items.

A locator pendant given to her by her idol, Captain Marvel, is the last of her accessories. With this, she can call Captain at the push of a button. However, New Jersey lost this during the Second Superhero World War. 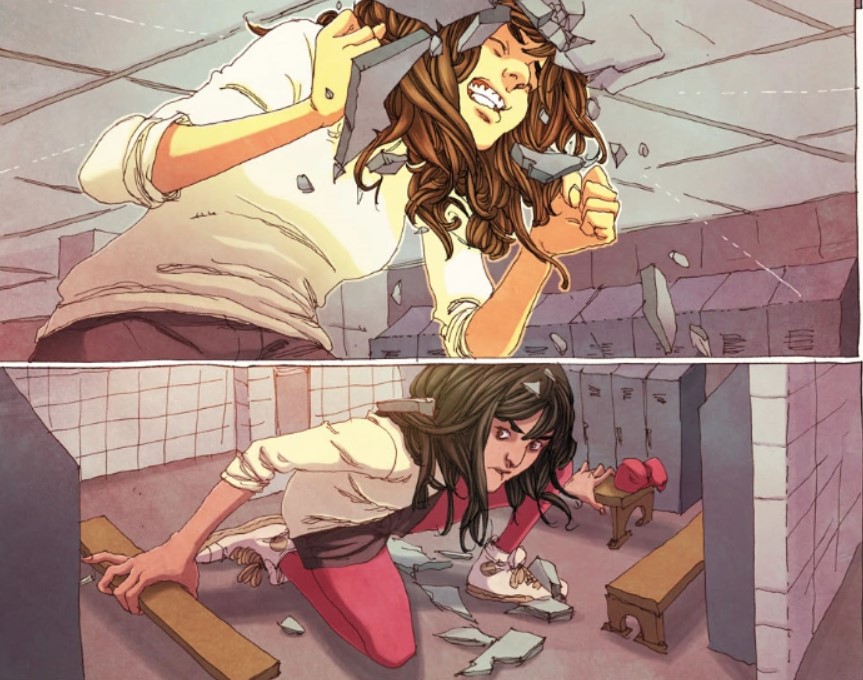 Ms. Marvel has mostly appeared several times in comic books, even though she has had a few appearances in animated series and video games. With the series premiere on the Disney + streaming platform, it would be her first appearance in any film, whether movie or series.

This character appeared in comics a long time ago. However, this wasn’t the final version of the character we know today. Ms. Marvel appeared as Carol Danvers in The Avengers #171 (May 1978). But the superhero as we know it today, created by Sana Amanat, G. Willow Wilson, and Adrian Alphona, appeared for the first time in Captain Marvel #14 (August 2013) 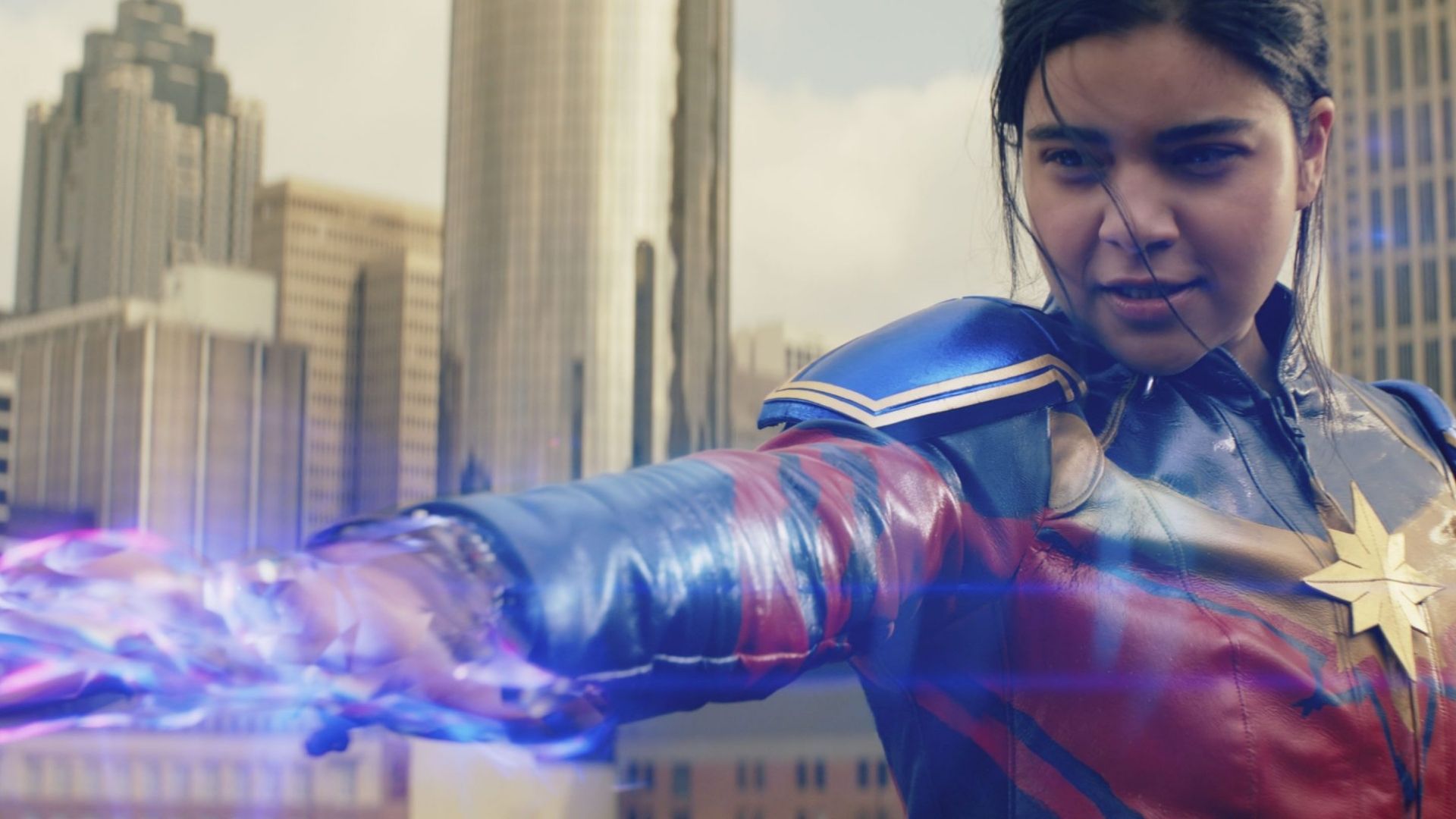 In television, she has only appeared in one opportunity, in Ms. Marvel, a series created for Disney + and belonging to the MCU. This series premiered on June 8, 2022, releasing a chapter weekly on Wednesdays.

In the cinema, he has not appeared so far. However, with the success of the series and the MCU, it is not ruled out that a movie will be released soon. 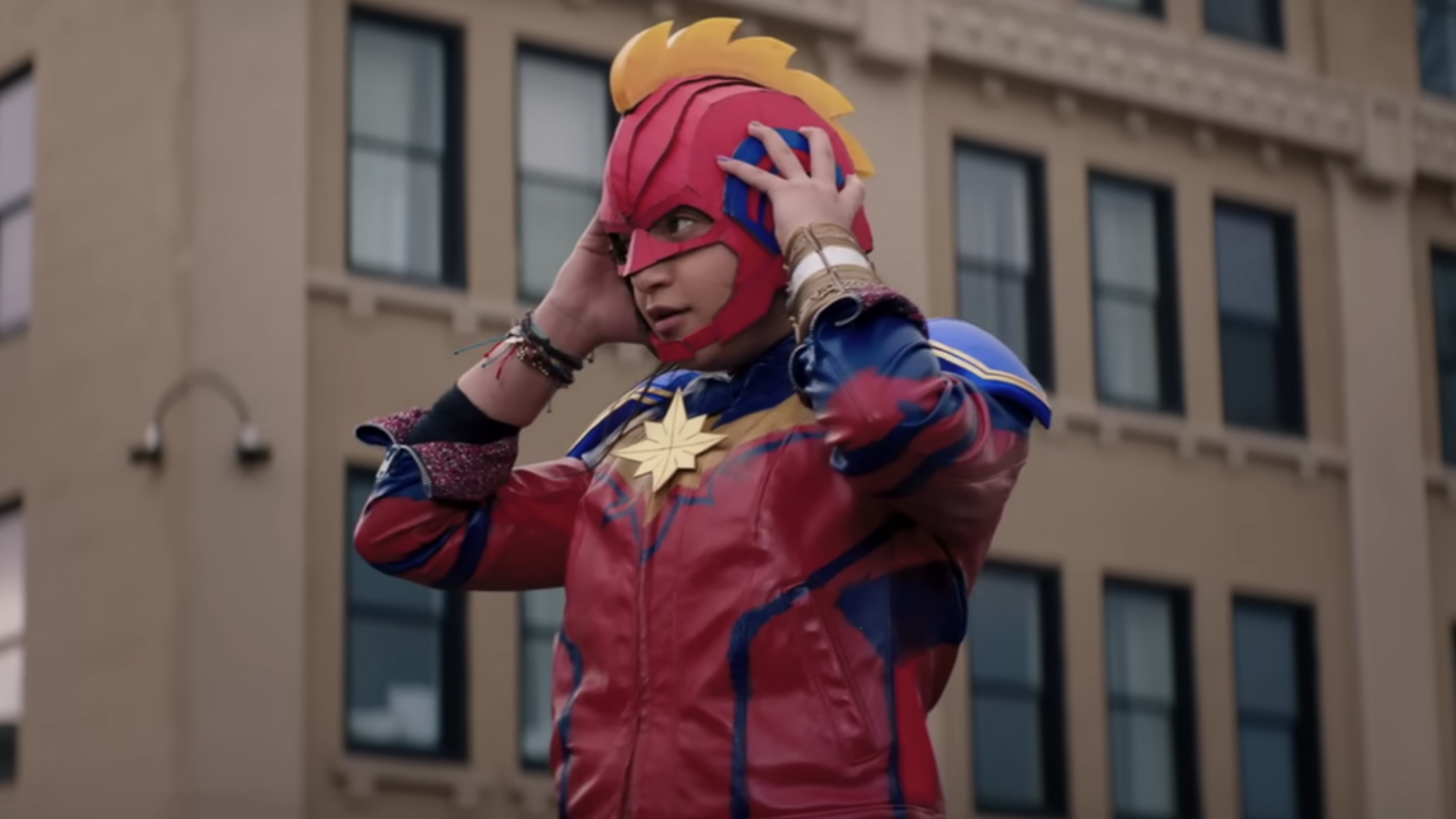 This character is quite unknown by the general public and even creates confusion because several characters have had the same name. However, in the current canon, Kamala Khan is the only one. We have the case of the original Ms. Marvel Carol Danvers, who later changed her name to Captain Marvel. Other comic book characters used that name, such as Sharon Ventura, who appeared in the comic book The Thing #35 (May 1986).

With this new series, this Marvel character is becoming popular. It is breaking records, racial and cultural barriers, and the expectations of critics and fans who have highlighted this new Disney production.