Vote for DC Series Coming Next Like You Did To Kill Jason Todd!

Home » COMICS » Vote for the Next DC Series…Just Like You Voted to Kill Jason Todd!

Vote for the Next DC Series…Just Like You Voted to Kill Jason Todd! 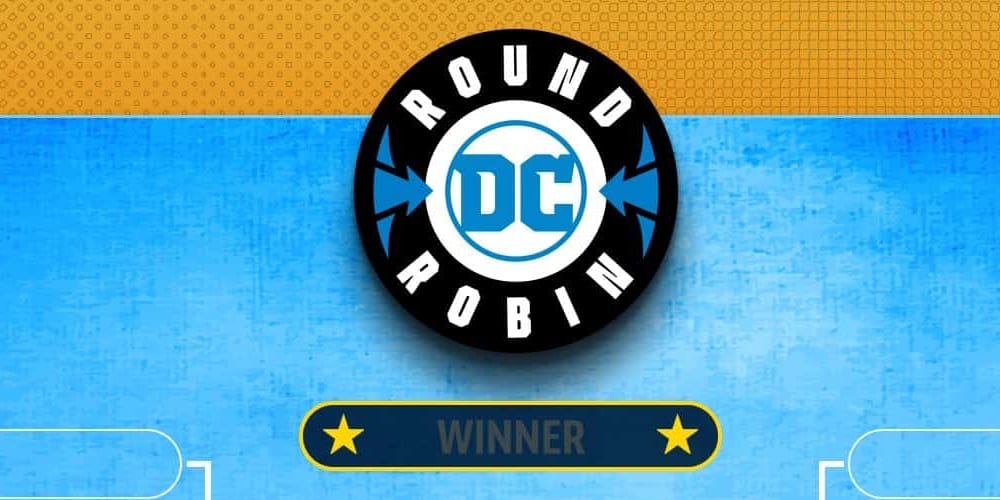 You can vote for the next DC series just like we all voted to kill the second Robin back in the 1980s. Well, not exactly. And yes, in case you never heard the story, fans really voted for Jason Todd to die. Overwhelmingly so. Now DC Comics is trying a new democratic approach to comics and letting readers vote for the next comic series. Styled like a March Madness bracket, they’re pitting sixteen series ideas against each other to see which one comes out on top. So, if you’re a fan of Etta Candy, you might want to start campaigning now.

What Are the DC Series Fans Can Vote For? 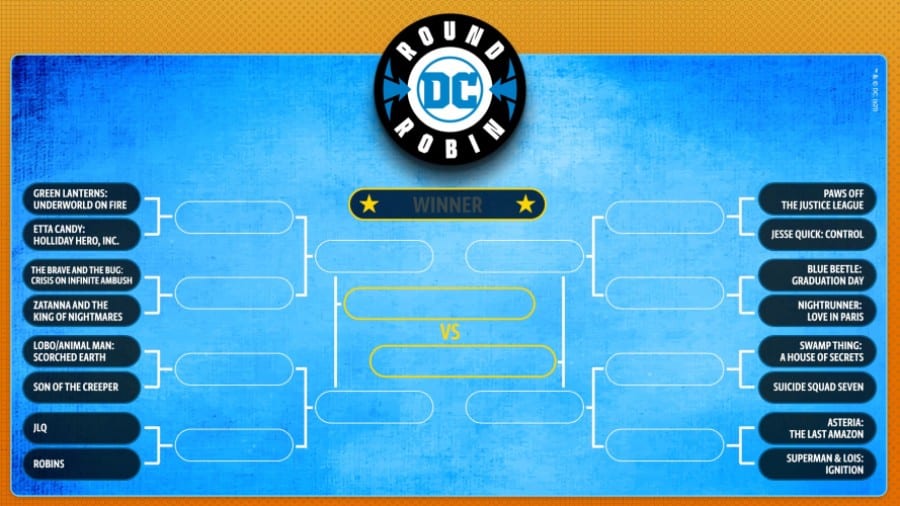 We have March Madness. Should we call this Raging Robin? (Image: DC Comics)

So, yes, there is a pitch for “Etta Candy: Holliday Heroes Inc.” But on the other side of the “bubbly to grim” spectrum, we have “Lobo/Animal Man: Scorched Earth.” Now, that last team-up feels like a “wait, why didn’t this already happen?” kind of story. On the other hand, we all know hardcore Etta Candy is. Yet those are just two of the potential DC series you can vote for. The list for the first round (of the -ahem- Round Robin) includes: 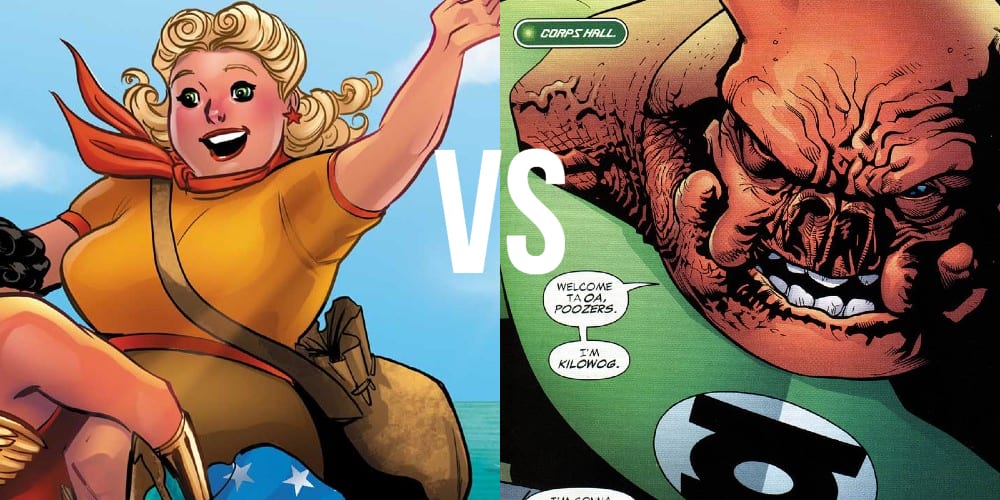 Here, we have Etta vs Kyle Rayner and Kilowog. We’re torn here at Comic Years on this one. On the one hand, Etta Candy is an underused character. Plus, she’s going to star opposite Amanda Waller. How awesome is that going to be…potentially, that is. On the other hand…Kilowog, AKA, the Best Lantern. Here are the descriptions of the two DC Comics Series you can vote for:

A deadly outfit of space outlaws are razing the intergalactic underworld sector by sector under the command of a disruptive new kingpin, in search of an ancient payday worth becoming the target of every power player in the galaxy—including Sinestro! Green Lanterns Kyle Rayner and Kilowog are put on the case, but will Kyle be able to do this one by the book when he finds out who’s behind it all? 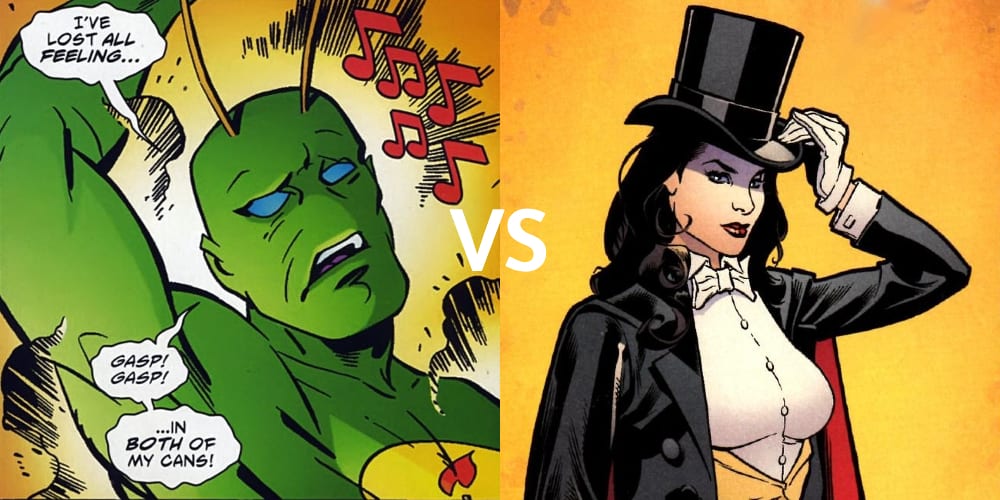 Do you remember the character Ambush Bug? No? Neither could any of us here, but he is a DC hero and apparently a bit of an idiot. Like the DC equivalent of Marvel’s D-Man. While it would be fun to see this character team up with various DC heroes, he’s unfortunately up against fan-favorite Zatanna. Here…we love a good underdog story, so go team Ambush Bug. Here are the descriptions of the two DC Comics Series you can vote for:

The Brave and the Bug: Crisis on Infinite Ambush

Ambush Bug must team up with some of DC’s greatest heroes to survive an attack by revenge-seeking Ambush Bugs from across the MULTIVERSE who never got to exist thanks to AB’s refusal to be rebooted.

Zatanna and the King of Nightmares

Something is terribly wrong with Zatanna’s powers, but before she can heal herself, she is forced to confront her worst fears in a strange new spiritual realm ruled by the terrifying otherworldly foe known as the King of Nightmares. 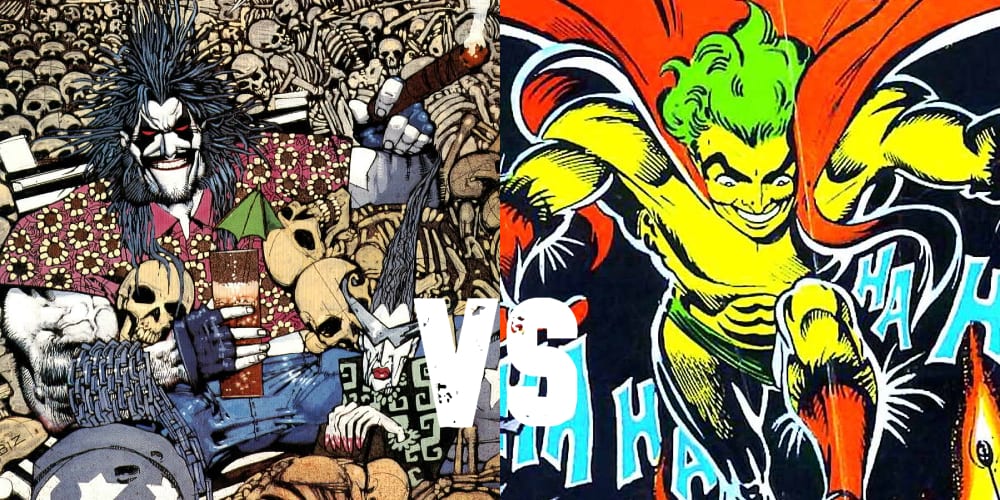 This match is so lopsided; it’s like DC just needed some random series to vote for. Lobo and Animal Man, two of the best and most-loved characters at DC…against a new character based on an already obscure character. Sure, we said we love underdogs, but in this case, we’ll take the guy who can channel the powers of a dog. Here are the descriptions:

Lobo. The name makes entire alien races collectively wet themselves with fear. The Main Man is proudly hyper-violent, arrogant, loud, stubborn, impatient, and ill-tempered. The best thing about him is that after he completes his contract, he leaves. Until now…

Son of the Creeper

An awkward teenager’s life is turned upside down when he inherits his dad’s chaotic powers. With his family in danger, Kieran Millar must save a father he doesn’t know from the monster he’s become. 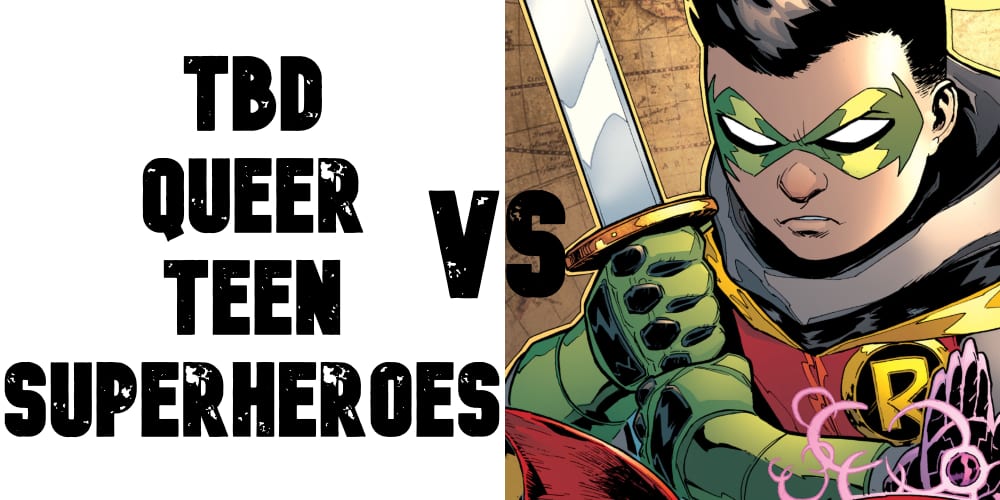 Time to bring in the YA readers! The first of the two titles needs a different title. Justice League Queer…it’s like when they added “Black” before any character or team who were Black. It would be like Kieron Gillen naming his landmark Young Avengers run “Queer Avengers” since all the characters were queer. The description doesn’t inspire either. However, the Robins series sounds really interesting. Here are the descriptions of the two DC Comics Series you can vote for:

Eight young queer heroes investigate a series of monstrous manifestations around the world and discover that something much more terrifying is coming.

In the Blüdhaven apartment of Dick Grayson, a group of young people meets for coffee, doughnuts, and kvetching (between long, awkward silences.) The only thing they have in common? All were once Kid Wonders. Sidekicks to Batman. Robins. 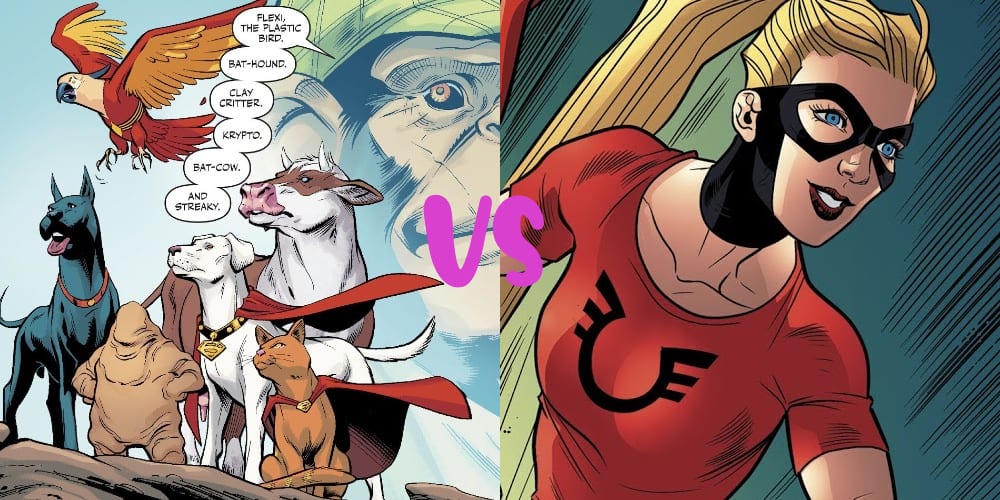 The next pair has us split down the middle. One series sounds like it will be bonkers fun. But the other sounds like a great story exploring a smaller member of the Flash family. Either way, we’d probably win regardless of which DC series fans vote for. Here’s the info:

Paws Off the Justice League

When the Justice League disappears, Jimmy Olsen and the Super Pets must save the world from certain doom by posing as the missing League.

When Jesse Quick uses her speed to access an alien artifact from a long-dead civilization, she finds herself imbued with the ability to harness and control the elements around her as her former super-speed is drained. But, when the power begins to corrupt Jesse, she must decide to give up these gifts or risk becoming, quite literally, her own worst enemy. 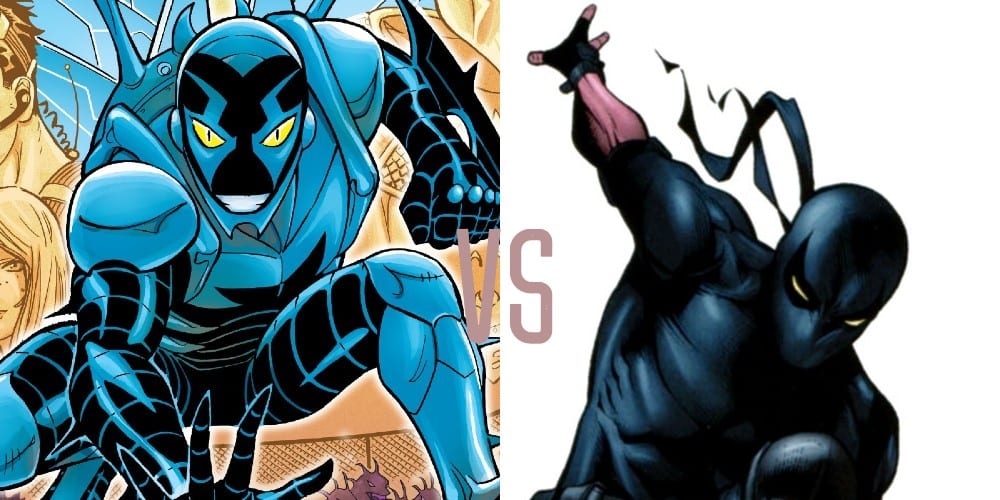 Okay, so these next two both sound a bit boring. Even here, we’re split not because we’re excited for both but because we can’t decide which series we care less about. And to think that when fans vote for the next DC series in the first round, one of these two is going to move forward over other series that deserve it. So, here they are:

Trapped between heroics and his future, Jaime Reyes is directionless. When the Reach interrupt Jaime’s high school graduation, things only get worse. Starfire becomes a new mentor to Blue Beetle, but is it Jaime or the Scarab that’s really in the driver’s seat? And why hasn’t Jaime applied to any colleges?

All of Paris is obsessed with an intoxicating virtual songstress, whose holographic stage shows are lighting up the City of Love. But when the “vocaloid” ingenue’s fans start to disappear, Nightrunner must track down the infamous developer behind the eerily realistic celebrity AI. 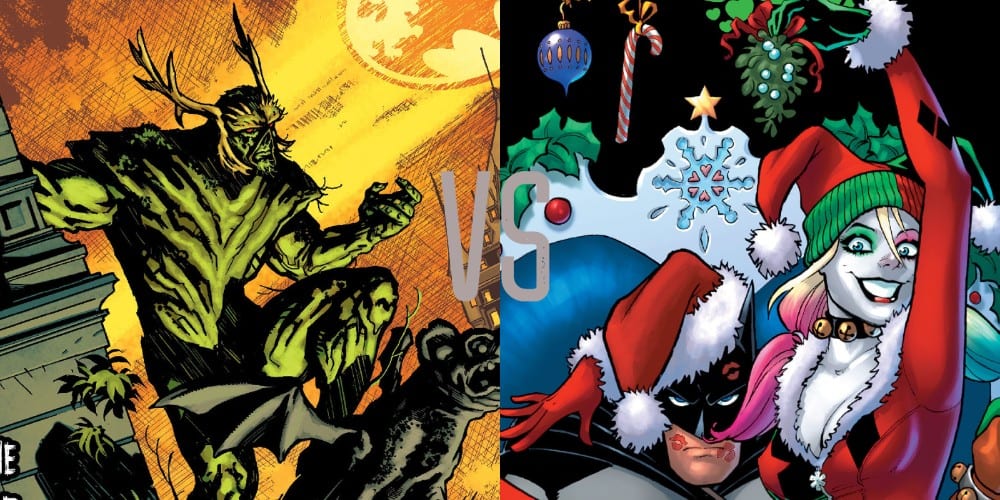 From “who cares?” to “can we have both,” the seventh match is a big one. In fact, we just didn’t want to vote for either DC series because it felt like picking a favorite child. Swamp Thing vs Harley Quinn and the Suicide Squad. Likewise, both stories are really intriguing. Here they are:

Swamp Thing: A House of Secrets

When love will not die, the dead must rise from the grave to kill it.

Louisiana, 1905: Caught in an eternal triangle of love and living death, the monstrous Alex Olsen; his widow, Linda; and his undead rival, Damian, vie for control of the cursed swamp where life, death, the past, and the future spiral into one never-ending nightmare.

Harley Quinn leads a team of criminals—a millionaire adventurer, a stage magician, a sugar-obsessed serial killer, a delusional former superhero, a drunk assassin, a mute metahuman, and a child who becomes a monster—to stop the centuries-old Church of Blood from trying to destroy all of humankind. 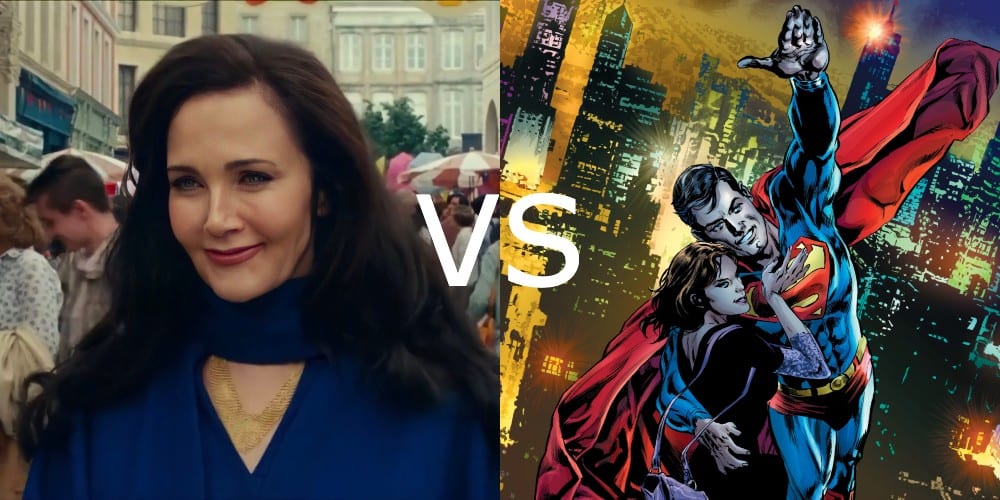 Like the last match, both of these series have great potential, and it’s too bad they can’t both move forward. However, neither win the DC Series Vote; they could make great DC Black Label miniseries. Firstly, we have Asteria (we heard about her in WW84, and portrayed by Linda Carter in the post-credit scene). Because her role was one of the best subplots (and underexplored) of WW84, more Asteria would be great. But then there’s Superman and Lois Lane vs THE ENTIRE SOLAR SYSTEM. So, yeah, that has Black Label written all over it. Check out the descriptions.

An immortal Amazonian champion returns to Man’s World to discover her and the Amazons’ sacrifice now forgotten; a new breed of hero seeking power, glory, and dominance; and the secret family she left behind offering one last chance at redemption.

Our solar system is a machine—and its purpose is to trap and kill Superman! The sun is darkening, Mars’s orbit is changing, and a mysterious citadel in Jupiter’s Great Red Eye has awoken; it is time for Kal-El to stand against the very end of his world. But he won’t be doing it alone: Lois Lane is suited up and blasting off to get the biggest story in human history…and to watch Clark’s back as he faces his greatest challenge yet. Facing ancient aliens and planet-sized machines, trickster asteroids and the gigakrakens of Neptune, Superman and Lois will fight across all nine planets to prevent Earth’s dark destiny and save our future!

Which DC Series Will You Vote For?

The first round ends midnight April 7th, PT, so make sure you get your votes in soon. However, if you still aren’t sure, there’s a Q&A you can read to see how the teams pitched each idea. Also, let us know below which DC series you want to vote for!